As Washington seeks to counter China’s rise and threats to security in the South China Sea, it has not hesitated to seek Vietnam’s friendship and cooperation. According to James Borton of the School of Advanced International Studies at Johns Hopkins University, it matters that the US-China confrontation over technology involves economic, security and political issues that are difficult to untangle. Despite Vietnam’s own authoritarian political system, the lack of an independent media and new rules requiring foreign tech companies to store user data, the nation’s innovation strategy is proving to be a direct beneficiary of increasing US tech cooperation opportunities in green energy, nano and electronic technology, biotechnology, hi-tech-agriculture, solar energy and electric vehicles (EVs) as more US companies decouple from Beijing’s onerous zero-Covid policy, weakened economy and rising labor costs. 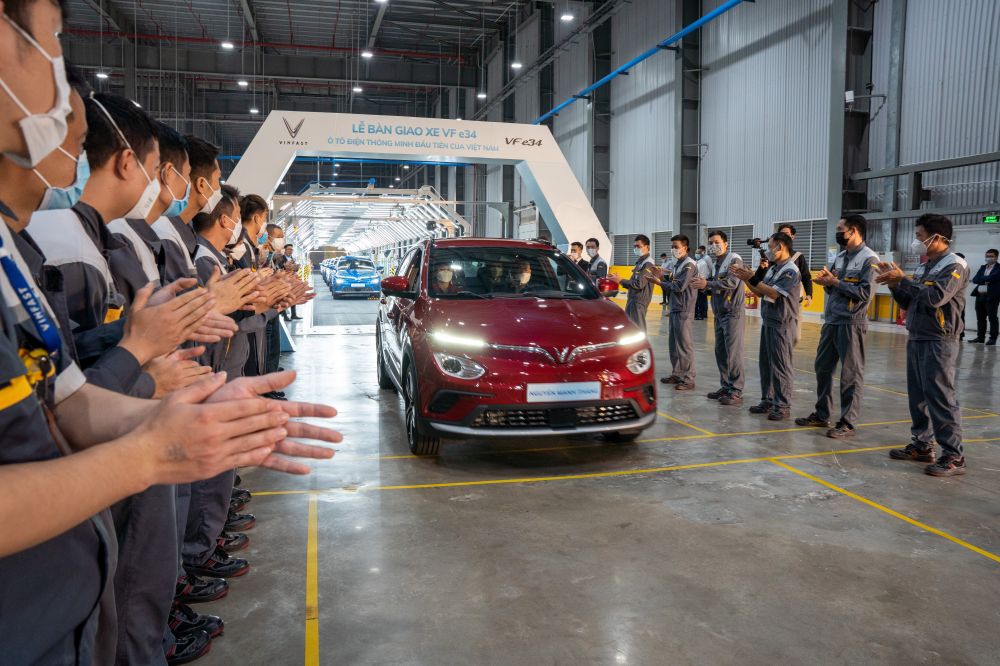 VinFast rolls out a new EV model, Haiphong, December 25, 2021: Foreign investment, particularly from the US, has propelled Vietnam’s economic engine since the country first opened up its cheap labor market to investors with the launch of economic reforms in 1986 (Credit: NamLong Nguyen / Shutterstock.com)

Stroll around Hanoi’s bustling Old Quarter and it is clear that Vietnam’s 98 million citizens are experiencing the rising tide of benefits from globalization and an inspired post-pandemic recovery with increased tourism and domestic consumerism. Vietnam has managed various challenges effectively including the sharp downturn in the global economy, and inflation. Its comprehensive, consistent vaccine rollout and pragmatic reopening positioned Vietnam for a resilient recovery and this is seen in the record number of visitors checking in at the hotels in Hanoi and Ho Chi Minh City.

Over the past three decades, through its economic reforms and integration with world markets, Vietnam has transformed from one of the poorest nations to a middle-income economy in just one generation. The Communist Party’s shift to a socialist-oriented market economy propelled the country on this meteoric jump, which was fueled by the jobs created by nation’s booming export trade especially with the US.

Foreign investment, particularly from the US, has helped propel Vietnam’s economic engine since the country first opened up its cheap labor market to investors with the launch of economic reforms in 1986. Over the past decade, Vietnam became a major manufacturing center in Asia and is listed as among the top ten trading partners for the US.

Vietnam has weathered the pandemic and the economic crisis it spurred, as well as the ill winds from the Ukraine war. Adam Sitkoff, executive director of the American Chamber of Commerce (AmCham) Vietnam in Hanoi explains that Vietnam’s “timely adjustment to petroleum prices and pauses on new taxes and fees have helped tamp down inflation.” He argues that the country “deserves credit for enabling a stable macroeconomic environment, high GDP growth, and low inflation, as well as fiscal prudence with one of the lowest government debt-to-GDP ratios in the world.” 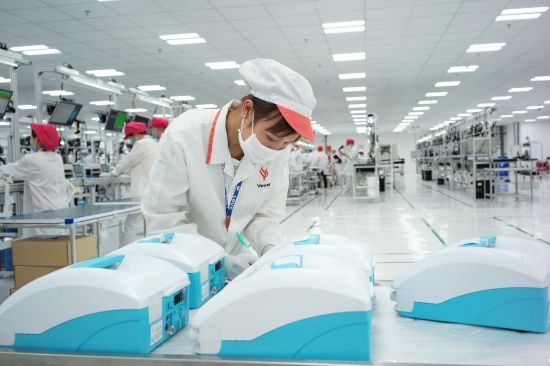 Ventilator factory in Hanoi, August 2020: Although Vietnam is recognized as a major exporter of electronics and apparel, there is ongoing a major shift to higher-value exports directed to the US market (Credit: NamLong Nguyen / Shutterstock.com)

Although the country is widely recognized as a major exporter of electronics and apparel, there is ongoing a major shift to higher-value exports directed to the US market. Vietnam’s manufacturing base is no longer limited to just textiles and apparel. Phone and components exports, at US$45 billion, already exceed footwear and textile exports combined. In a boost and nod to Vietnam’s technology manufacturing abilities, Apple is shifting its iPad production from China and is in talks about producing entirely new Apple watches and MacBooks in Vietnam.

In a major technological shift, VinFast, an auto manufacturer, located in Haiphong, has recently loaded up a cargo carrier with state-of-the-art electric VF8 SUVs bound for the promising California market. This marks the first shipment abroad after more than 65,000 orders of VF8 and VF9 models. Entrepreneur Pham Nhat Vuong, widely regarded as the richest person in Vietnam and whose Vingroup is the country’s largest private enterprise, is behind VinFast. He got his start in business in 1993 selling noodles in Ukraine and is now investing US$5 billion in EVs. His conglomerate has a market value over US$24.4 billion. During the pandemic, the company’s revenue alone accounted for 2.2 percent of the national GDP.

In May 2021, Vingroup decided to shut down its VinSmart electronic devices manufacturing unit to “mobilize all resources” on developing its car-making business. VinFast, which was founded in 2017 and began operations two years later, announced on December 6 that it would convert to a Singapore public limited company to list on the Nasdaq in New York. The company’s arrival on the global scene has signaled a new era for Vietnam and sounds a clarion call for increased investments in high-tech manufacturing in the country.

A study by the Center for Strategic and International Studies (CSIS) in Washington identified Vietnam as an emerging digital powerhouse in Southeast Asia. Hanoi is aiming to position the country as a regional hub for the manufacturing of semiconductors and other technology. Tech giants such as Apple, Samsung, LG and Foxconn, among others, have already established a presence in the country. US-based Universal Alloy Corporation (UAC), which manufactures electronic devices and components for airplanes built by Boeing and Airbus, has invested US$170 million in the Danang Hi-Tech Park. Meanwhile, a few months ago, Google announced that it was moving production of its Pixel phone from China to Vietnam.

Vietnam is following Japan and South Korea in bringing its technology to the US and setting up manufacturing operations there. VinFast has pledged to invest over US$4 billion to build a 2,000-acre plant with a capacity to produce 150,000 EVs a year in Chatham County in the central part of the state of North Carolina. The company’s assembly lines in Haiphong, a city heavily bombed by the US during the Vietnam War, can roll out 250,000 vehicles a year. The company is also producing electric motorbikes, which are popular in remote provinces in the Mekong Delta.

Vietnam’s political leadership is seeking to adopt more technology as its moves to turn its major urban areas into smart cities. EVs are key to this effort, especially as more and more citizens rise up from poverty and move from rural areas to municipalities at a rate of 3 percent of the population a year. The introduction of more EVs on the roads would help address the pollution problem in the big cities. 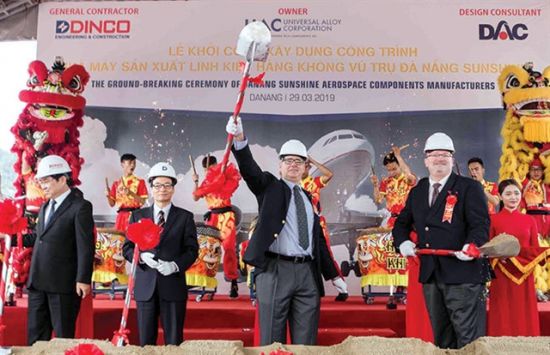 To be sure, Vietnam’s skilled and low-cost workers, good and improving infrastructure, stable government, and tax-free zones continue to be the key attractions for US multinational companies and other investors seeking locations for factories. Vietnam exports to US totaled US$77.07 billion in 2020, according to United Nations data, with mobile phones at US$18 billion and integrated circuits at US$15.5 billion.

According to American government information, the US is Vietnam’s largest export market, with exports over the first 10 months of 2022 at US$93.4 billion and imports at about US$13 billion. Do Thang Hai, deputy minister of industry and trade, reports that the bilateral trade has increased by about 248 times from US$450 million in 1995, reaching nearly US$113 billion in 2021 despite the pandemic and supply-chain disruptions. Vietnam is the 8th largest trading partner of the US.

AmCham Vietnam predicts that there will be more and more opportunities for American investors in light of Vietnam’s participation in new trade arrangements. The country is one of four ASEAN economies (Brunei, Malaysia and Singapore are the others) that are part of all the key trade and economic groupings in the Indo-Pacific – the Asia-Pacific Economic Cooperation (APEC) forum, the ASEAN Economic Community, the Comprehensive and Progressive Agreement for Trans-Pacific Partnership (CPTPP), the Regional Comprehensive Economic Partnership (RCEP), and the Indo-Pacific Economic Framework for Prosperity (IPEF).

The US is a member of APEC (and will host next year’s summit in San Francisco) but is not part of either the CPTPP or RCEP. It does belong to the USMCA, or “NAFTA 2.0”, the North American free-trade agreement among the US, Mexico and Canada, the latter two being CPTPP signatories. Washington launched the IPEF in May this year to offer an alternative to RCEP (which brings ASEAN member states together with five of its dialogue partners including China) and Beijing’s other foreign economic policy initiatives and to make up for the US withdrawal from the original CPTPP in 2017.

The pathway to increased US-Vietnam trade and investment relations is not without risks similar to those that have disrupted US-China commerce, especially with regard to new technology and national security and human rights concerns. But given the strategic shifts in the region and Washington’s identification of Hanoi as an important partner in its quest to diversify away from China-dominant supply chains, there is likely to be much room for the US and Vietnam to broaden and strengthen their economic ties to mutual benefit. 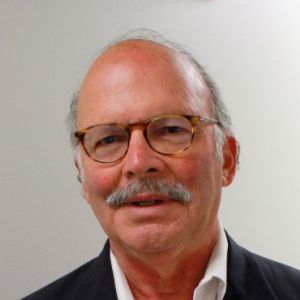