Tech Platforms in Australia: Bargaining for a New Paradigm

Australia’s News Media Bargaining Code is designed to benefit news organizations by getting global tech platforms Google and Meta to pay for news content. But as news outlets diversify revenue streams, it is becoming apparent that new and old media have more in common than meets the eye. RMIT University senior lecturer James Meese discusses the impact of the code. 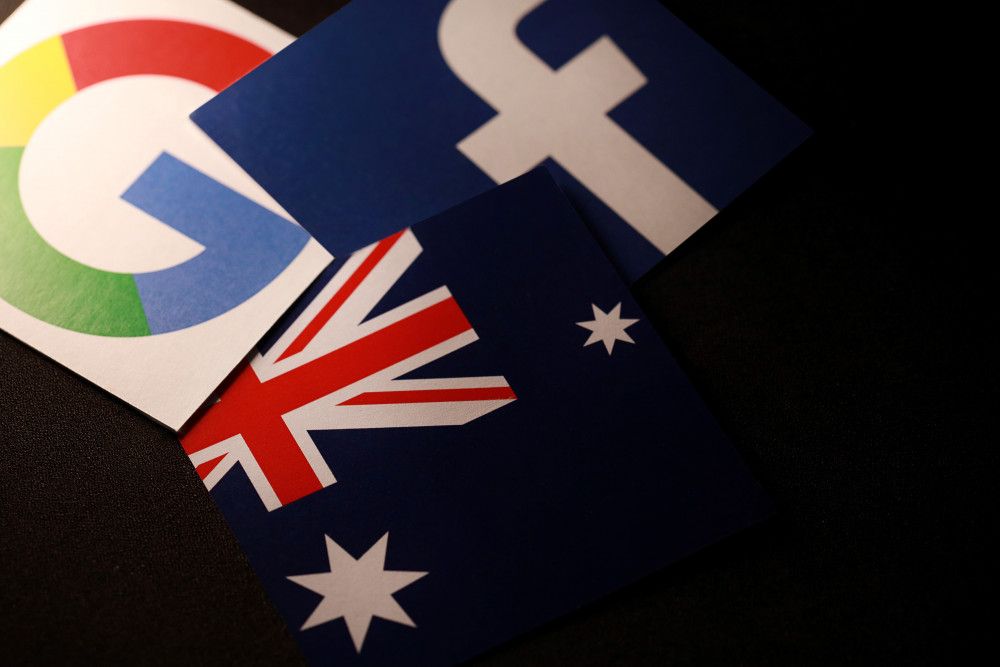 It has been just over a year since Australia enacted the News Media Bargaining Code (NMBC), a reform that dramatically intervened in the decades-long conflict between news publishers and digital platforms. Internationally, the code has been viewed as a success because Australia has been able to get tech platforms Google and Meta to pay for news content, something that other jurisdictions have struggled to achieve. However, as the news media sector continues its move towards the collection of first-party data and personalization, the public battle between the old and new giants of information obscures interesting ways that the two sides are converging.

The Australian Competition and Consumer Commission (ACCC) developed and introduced the new code. The regulator is responsible for competition law and consumer protection but is also known for its ability to explore complex policy issues. So, it was no surprise, when they were asked in 2017 to conduct the Digital Platform Inquiry – a multi-year inquiry into digital platforms.

The inquiry examined everything from online privacy to the sustainability of public-interest journalism and produced a number of recommendations including the NMBC – the first recommendation from the inquiry that the Australian government acted on. The commission was then made responsible for its development.

While Google and Meta have been asked to pay for news content in the past, the platforms have simply ignored these requests. In certain cases, they have responded by excluding targeted products from jurisdictions, as Google did in Spain with Google News. The two companies were threatening to take a similar approach and either exit Australia or no longer serve news to Australians using their products.

The ACCC tried to counter these threats by introducing a resolution mechanism called “baseball arbitration”. If news organizations and platforms could not agree on a deal, they would be forced to submit final offers to an independent arbitration panel. Arbitrators would make a final determination on value. Google and Meta were keen to avoid this opaque process, which would leave them on the hook for an unknown amount of money. As the bill progressed through parliament, Google started to experiment with removing news from their Australian products.

Worried about news disappearing from two major online intermediaries, the Australian government initiated negotiations with both companies. The parties agreed to compromise: If platforms established enough commercial deals, they would not be subject to the legislation. As a result, while the law has been enacted it remains unused. 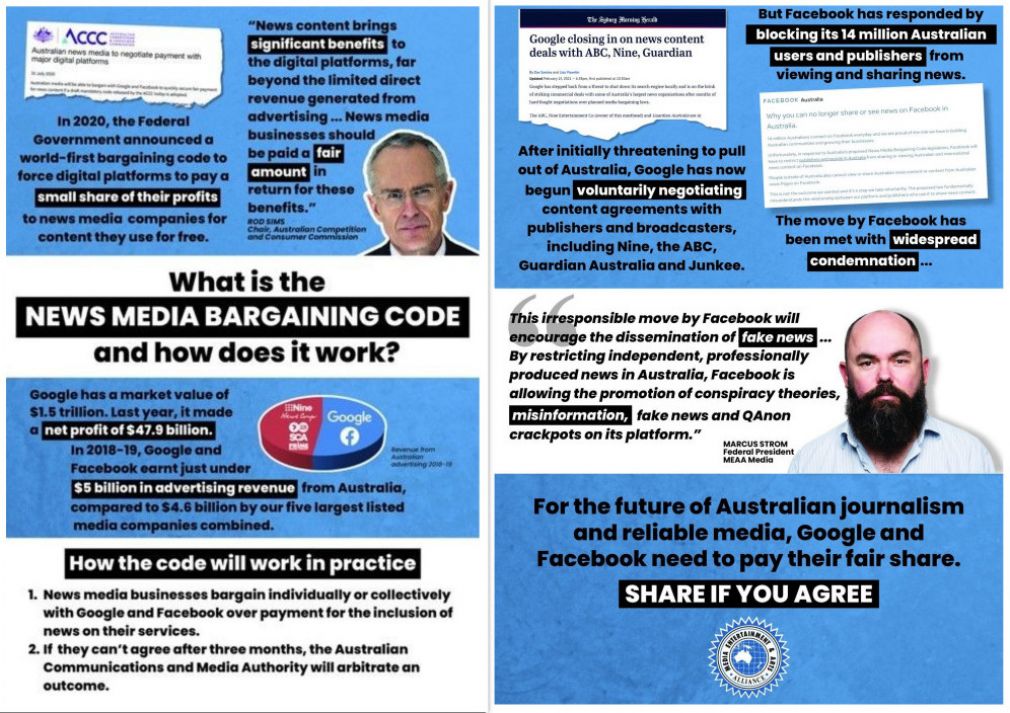 News you can use: The Media Entertainment & Arts Alliance (MEAA), the union and industry advocate for Australia’s creative professionals, offered its views on the News Media Bargaining Code (Credit: @withMEAA on Twitter)

Impact of the NMBC

It was in this context that platforms started to hand over money to Australian news publishers. While the numbers are confidential, Rod Sims, former chair of the ACCC and the code’s architect, estimates that around AUD200 million (US$126.4 million) a year has been given to Australian news organizations. This lack of transparency also means that we do not know how much individual news organizations are getting. The speculation is that major outlets may be getting paid in the realm of between AUD25 million (US$15.8 million) to AUD30 million (U$19 million) each year, with smaller outlets looking at around AUD31,000 (US$19,600) to AUD62,000 (US$39,190). While the focus has been on the money, Google’s deals were also reported to include advertising and product licensing discounts.

Google has been particularly generous and has made deals with 37 outlets, from some of Australia’s largest multi-platform news organizations to outlets focused on specific ethnic or cultural groups such as the Australian Chinese Daily. In contrast, Meta has concluded deals with only 14 media companies. The belief is that the Australian government may subject Meta to the code through designation and force them to sign deals with more media organizations. Regardless of what happens with Meta, independent Australian think tank Public Interest Journalism Initiative estimates that 61 percent of Australian news organizations are covered by at least one deal. They crunched these numbers before another round of Google deal-making so even more news organizations are likely to be covered at the time of writing.

Other jurisdictions are now planning to introduce their own version of the code. The United States, the United Kingdom and India are working on similar reforms, and the Canadian parliament is considering a complete bill. Unlike the NMBC, Canada’s Online News Act features a formal commitment to transparency with respect to platform deals and clearer guidance for how platforms should be made subject to legislation.

Are reforms on new and old media even relevant?

Policymakers have tended to view the transfer of revenue from platforms to news media organizations as an unproblematic intervention. This is an understandable perspective considering the financial decline of the commercial news media over the past decade and the growing global appetite for platform regulation. There are, however, still a lot of unanswered questions about this specific reform agenda. 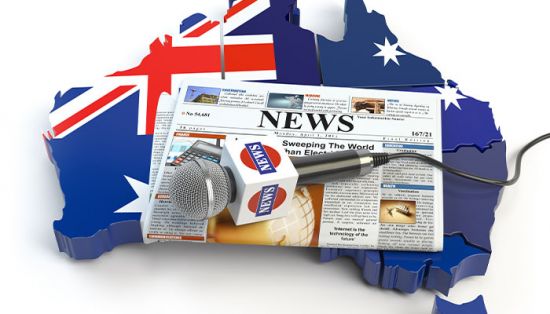 The implementation of the NMBC marked the first time that a country managed to break the deadlock between news publishers and digital platforms and secure platform revenue for the news media sector (Credit: Maxx-Studio / Shutterstock.com)

The intervention presumes that platforms are an unavoidable intermediary between news outlets and their audience. However, research is starting to show that news organizations have varying levels of dependence on platforms and therefore may not always be a critical player in news distribution. These reforms also may provide better support to news media companies in general rather than public-interest journalism. While some outlets have made public commitments to spending the proceeds, others have been quieter about whether the money is going to journalism or shareholders. It is also no secret that Meta is less interested in hosting news (on Facebook) than Google.

These developments raise questions about the overall importance and relevance of reforms focused on transferring revenue between platforms and publishers. Of course, millions of dollars changing hands between platforms and news media outlets is a major story. It is no wonder that the code has generated significant international attention, both from the media and other regulatory agencies. However, other regulatory work emerging from the ACCC’s wider digital platforms inquiry may better target some of the longstanding issues in the news media space.

As noted earlier, while lots of policy activity emerged from the inquiry, the code was simply the first reform to be implemented – and one of the more contentious. In addition to introducing the code, the ACCC has completed a review of the state of competition across the online advertising market.

The online advertising inquiry targets one of the longstanding areas of dependence for the news media sector. Many news organizations rely on digital advertising for revenue flow. Google owns products across this supply chain and in some areas has established market dominance. This means that in many cases the news media end up relying on Google products for revenue. The ACCC review sits alongside regulatory inquiries conducted in the UK and the US, which are also looking at Google’s dominance in this sector. Any further regulatory activity, through attempts either to diversify the market or place barriers between Google’s various advertising products, should produce positive outcomes for the news media sector, such as greater transparency and improved competition.

Large news media organizations are not waiting for these inquiries to lead to reform. Instead, they are working to reduce their exposure to platforms by building subscription revenue streams and rolling out their own advertising platforms. The latter involves an intensification of data collection efforts to be able to sell audiences to advertisers. These market developments could see news media organizations align with platforms on policy activities. For example, the Office of the Australian Information Commissioner is in the process of reviewing Australia’s outdated privacy laws. Strategic activity across the news sector may well clash with any reforms to privacy legislation that the Australian government may choose to pursue.

Another major platform-oriented reform during this period also presents a possible regulatory threat for the news sector. DIGI, the not-for-profit industry association for digital platforms in Australia, developed and introduced a code of practice for disinformation and misinformation. While platforms were the original targets of the misinformation and disinformation code, there are discussions about potentially including news media in a revised code. While freedom of expression will still be protected, editors and journalists may be concerned about being included.

The implementation of the NMBC marked the first time that a country managed to break the deadlock between news publishers and digital platforms and secure platform revenue for the news media sector. That being said, it is unclear whether these reforms translate into meaningful public-interest outcomes. In addition, the reform has overshadowed a significant amount of adjacent reform activity occurring in Australia. It may be too simplistic to focus on the code, which places platforms on one side and news media on the other. Recent developments in the news media sector suggest that both sides may start to share concerns about other policy areas as they continue to invest in data and personalization and struggle with how best to handle the problem of misinformation. 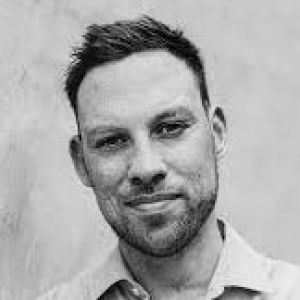 James Meese is a senior lecturer at RMIT University in Melbourne, Australia, and is a member of the Platform Futures expert network.