Because of its strategic location between major strategic and economic powers, Myanmar’s participation in China’s Belt and Road Initiative naturally entails a variety of risks including the possibility that the country could eventually host a Chinese military naval base and raise security concerns among its neighbors. David Morris of the Sustainable Business Network of the United Nations Economic and Social Commission for Asia and the Pacific examines what is at stake for the isolated Southeast Asian nation beset by internal crises including the political unrest sparked by the military coup in February 2021. 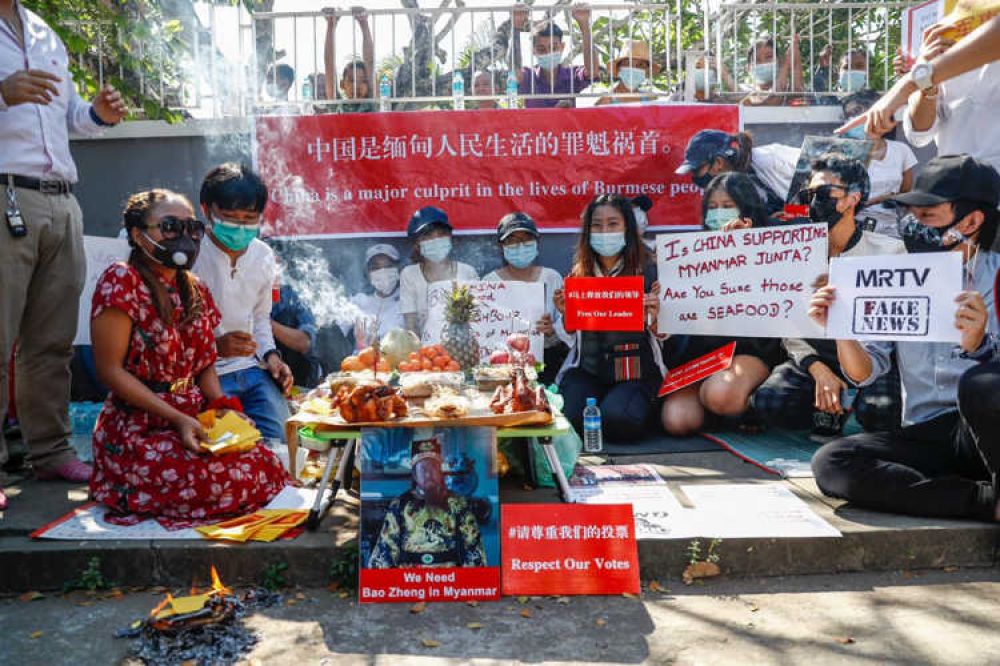 Anti-China demonstration in Naypyidaw, Myanmar: Chinese actors have a higher tolerance for political risk than many of their competitors (Credit: ANI)

China’s Belt and Road Initiative (BRI) is often depicted by critics as a grand strategy to trap developing nations in debt, build new trade routes and construct a new world economic order. The asymmetric relationship between China and Myanmar might therefore be expected to generate a range of risks, especially with the giant Kyaukphyu port and special economic zone project located in conflict-prone Rakhine State. Myanmar itself is a perfect storm of hazards for infrastructure development projects. On closer inspection, the myriad challenges are complex but successive military and elected Myanmar governments have demonstrated agency and have not been simply victims of a monolithic neighbor. Nevertheless, the outlook is grim.

Myanmar is torn between two narratives about the BRI. On the one hand, what is China’s signature foreign economic policy initiative offers a much-needed source of financing for infrastructure development and connectivity, when few other sources of funds are available. On the other hand, many question whether such projects favor Chinese interests – including security interests – over those of Myanmar. As a neighbor of China, Myanmar must balance the risks and opportunities presented by the BRI even as it faces its own internal crises, notably of course the civic unrest following the military coup in February 2021 and the Covid-19 pandemic.

Myanmar is not the only high-risk environment for big infrastructure projects across the BRI footprint, but it tends to exhibit all of the possible risks, from poor governance to concerns about debt, security, corruption, environmental destruction and even the balancing of geopolitical power and influence. While the widely circulated narrative during the years of the administration of Donald Trump in the US that China has been trapping developing nations in debt to seize geopolitical assets has been debunked, the question is: Does Myanmar – whose military regime has alienated most other investors – present a “worst case” (from the perspective of those concerned about China’s reach) in which Chinese influence may deliver a new geopolitical asset for Beijing on the Bay of Bengal?

Since its independence in 1948, Myanmar has been wracked by civil conflict, including the infamous pogroms of recent years against Muslim Rohingya communities in Rakhine State. Tragically, the only institution through which national power has been effectively exercised has been the military, the Tatmadaw, which a year ago crushed popular hopes for democratization, by overthrowing the elected government of Aung San Suu Kyi. Myanmar’s disproportionately large military establishment is intertwined with business interests and has maintained close contacts with China. 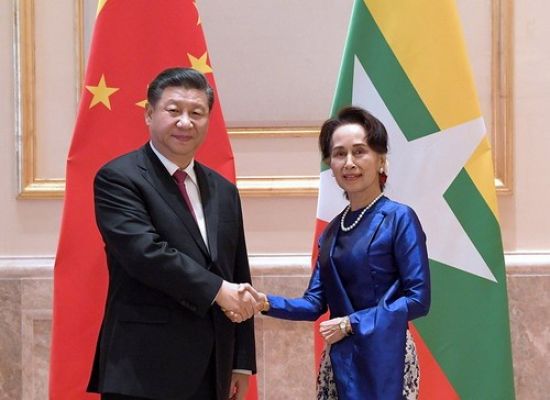 Xi Jinping and Aung San Suu Kyi meet in Naypyidaw on January 17, 2020: The "fraternal" ties may not run so deep (Credit: Foreign Ministry of the People’s Republic of China)

The Chinese government and Chinese businesses active in Myanmar have a long-term stake in a stable and developing Myanmar, including to quell unrest and illegal activities on the border, although historically Chinese actors have contributed to some of the same problems. China is building a border wall and demanding Myanmar strengthen security for key projects against armed insurgent groups. Nevertheless, Chinese actors have a higher tolerance for political risk in Myanmar than many of their competitors. Myanmar’s rich resources, including rare earths, are attractive to China for obvious strategic and economic reasons.

Once a key node of the ancient Silk Road between China and India, Myanmar offers significant potential for new transport, trade and energy flows. When fully operational, the BRI’s China-Myanmar Economic Corridor, with its rail, road, pipeline and port infrastructure, is expected to save around three weeks for the movement of goods between southwest China and the Indian Ocean. If Myanmar had its own economic development strategy, communities along the route could theoretically benefit from integration into regional and global value chains for manufacturing and services. When she was in power, Aung Sang Suu Kyi enthusiastically supported the BRI, attending Belt and Road Forums in Beijing with other regional and world leaders in 2017 and 2019.

Despite the traditional pauk-phaw (fraternal) friendship between the two countries, successive Myanmar governments have sought to maintain a non-aligned, independent foreign policy. Naypyidaw has welcomed investors from Japan, Singapore and elsewhere to balance Chinese financing, with renewed sanctions keeping Western money away. Recent attempts at economic reform to emulate the more successful investment and export-led development strategies of some of Myanmar’s East Asian neighbors have now ground to halt. This reinforces fears in civil society that Chinese interests, often bolstering local elites including the Tatmadaw, will prevail.

Development, investment or strategic play?: The Kyaukphyu Port and special economic zone on the Bay of Bengal could eventually include a Chinese naval base (Credit: graphic by CITIC)

Yet it is simplistic to imagine China is always getting its way because of its asymmetric power. The previous military regime famously responded to widespread protests by suspending the massive Myitsone Dam project, which would have displaced Kachin villagers to supply electricity primarily to China. Chinese firms involved suffered significant losses. The Chinese government has been frustrated, too, by slow progress on other BRI projects. During the 2020 visit to Myanmar by Chinese leader Xi Jinping, 33 agreements were signed for major projects but most have yet to proceed. There is a chronic lack of planning capacity to steer major projects forward according to any internationally recognized standards.

One of Myanmar’s signature BRI projects is the deep-water port and special economic zone at Kyaukphyu, a key component of the corridor connecting southwest China to the Indian Ocean. CITIC, the giant Chinese state-owned enterprise, which won the tender to build the project, estimates that it will create more than 100,000 local jobs, from oil refining to garment manufacturing and food processing.

Some see the port as a possible future military base, allowing China to break free of its strategic constraints in the Pacific, where it faces a superior US navy, and on land, where China is surrounded by rivals. Amid fears about Chinese military adventurism, there have been recurring rumors of Chinese plans to establish bases in Myanmar, but these never materialized. Whether China will rely upon diplomacy and reshaped trade routes to ensure its future economic security, or whether this rising power will copy the actions of its predecessors  by establishing networks of overseas bases remains unclear, but this is an issue of furious debate among scholars and strategic analysts around the world. (China has a People’s Liberation Army support base in Djibouti, a facility at Gwadar Port in Pakistan, an outpost in Tajikistan, and a naval intelligence station on a Myanmar-controlled island in the Bay of Bengal.)

For the foreseeable future, it is difficult to see Myanmar submitting to Chinese power. In 2018, Naypyidaw insisted that the Kyaukphyu project be scaled back from an unsustainable US$7.3 billion total cost to $1.3 billion in the first phase to reduce the risk of its debt to the Export-Import Bank of China. The government also renegotiated a greater share in management of the project for the Myanmar partners. 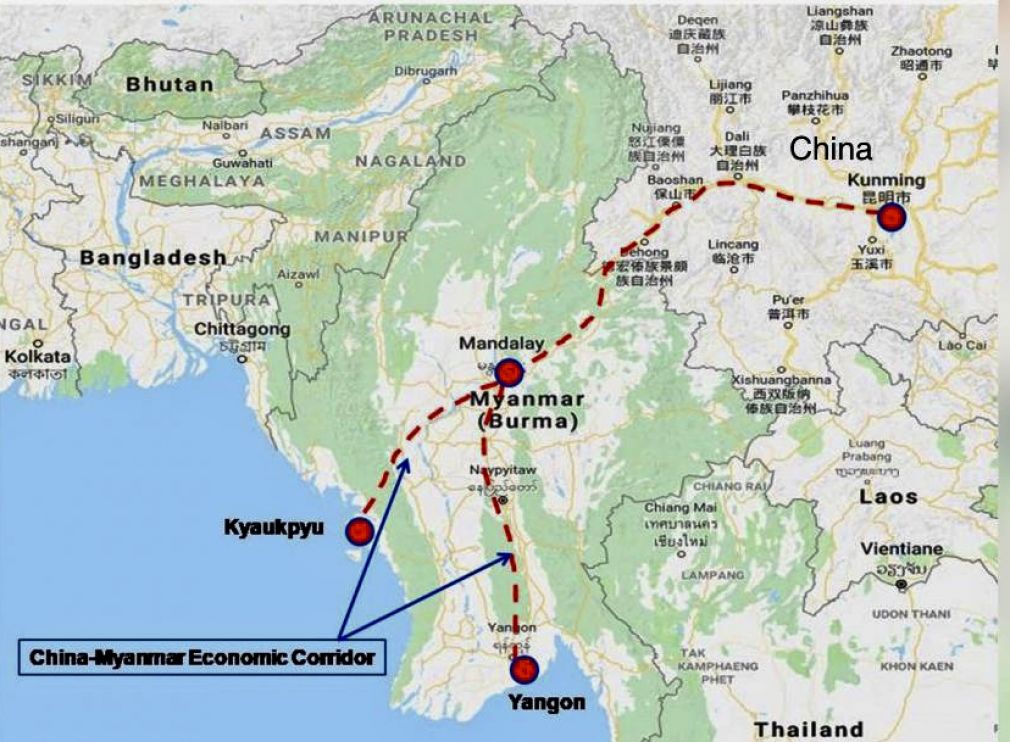 Nevertheless, a lack of transparency and indeed dysfunctional governance mean risks are ever present that the project could be driven by a different agenda than economic development. Indeed, a diverse range of stakeholders and experts interviewed by the author over recent years (before the current political crisis in Myanmar) feared poor social and environmental outcomes, given the experience to date of land seizures and the lack of any community consultation in Rakhine State.

Strategically located, Kyaukphyu could in better circumstances herald a new era of economic development but the pessimistic environment in which it is proceeding makes it difficult to forecast benefits to the people of Myanmar. To be sure, Myanmar has shown and is likely to continue to show its own agency in choosing which major infrastructure deals proceed in the troubled country. Even as new connectivity projects come on stream even under current circumstances, the Tatmadaw may simply seek rents from Chinese-dominated value chains, rather than foster domestic industrial development and local skills. Local opposition could yet pose fresh risks to Chinese investors and deter other investors as well. The project at Kyaukphyu will be one to watch to understand how China, Myanmar and a diverse range of stakeholders react to a perfect storm of risks and which parties weather it.

This is article is adapted from a paper by the author, which was published in the Journal of Contemporary Eastern Asia in December 2021.

Gong, Xue. (March 25, 2021) “The Belt and Road and the Pandemic: Impact on Southeast Asia amid the US-China Rivalry”, AsiaGlobal Online, Asia Global Institute, The University of Hong Kong.