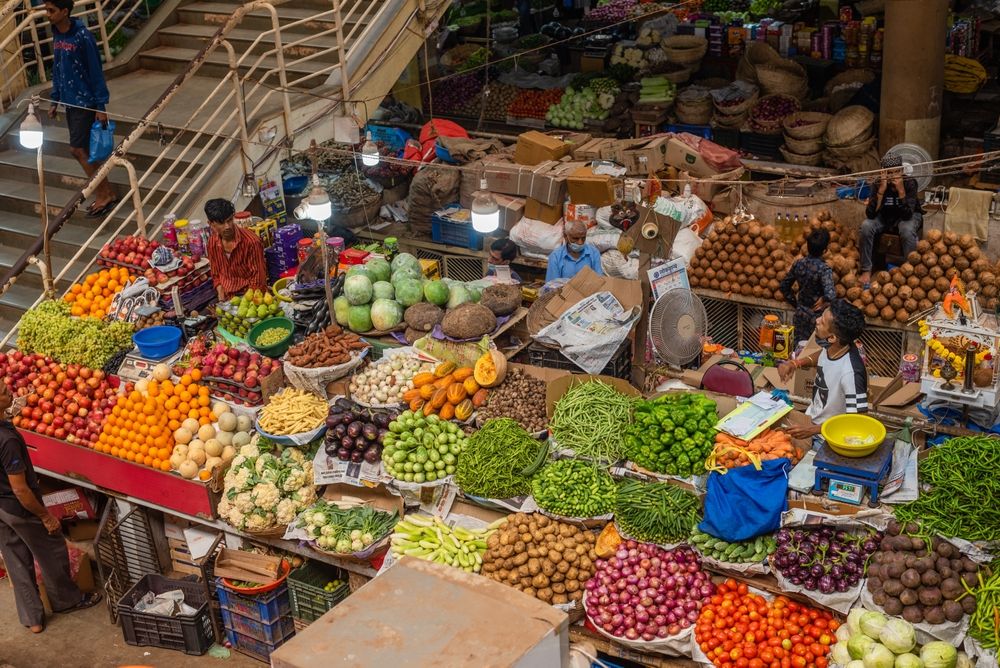 Food stall in Panaji, Goa: India’s poor spend more than 40 percent of their incomes on food so sustained increases in prices mean a rise in both hunger and poverty (Credit: Lloyd Vas / Shutterstock.com)

India’s inflation problem is making hunger worse and attempts to fix inflation may just add to poverty. Food grain rations have kept millions of people from falling into extreme poverty during the pandemic. Now, as the government considers whether or not to extend the scheme for the sixth time, it must factor in India’s complex food price inflation problem.

India’s poor spend more than 40 percent of their incomes on food, compared with 36 percent for welfare-dependent households in Australia and 27 percent for those among the lowest incomes in the US. For these groups, sustained increases in food prices mean a rise in both hunger and poverty. While the period before the pandemic saw exceptionally low food inflation in India, the pandemic-induced increase in food insecurity has not waned since lockdowns ended. In recent months, this has been further exacerbated by food and fuel price inflation.

Wholesale and consumer prices indices measure the changes in prices in relation to a reference year. These are estimated based on price data for a representative consumption basket and give a break up of prices for food and non-food commodities. As such, the inflation rate gives the rate of increase in prices compared to the same month in the previous year. The food index within India’s wholesale price index (WPI) increased on an average by 10 percent since the beginning of 2022, reaching a peak of 12.4 percent in June 2022.

Food prices in India have been going up due to global as well as domestic factors, primarily related to supply shocks due to various reasons as well as global increases in oil prices. While wheat prices started going up from September 2021, the Ukraine invasion and heat waves in India have also added to global price rises, along with vulnerability in wheat availability. Similar trends are seen in consumer price index (CPI) as well, with the inflation in cereals at 7 percent, oils and fats 7.52 percent, vegetables 10.9 percent and food and beverages overall at 6.71 percent in July 2022.

Impact of the rise of food prices

With food becoming less affordable, people tend to switch to inferior-quality foods and also cut down on more nutritious items such as fruit, high-nourishment vegetables, milk and meat – a problem given that diets in India already lack diversity and essential nutrients. An estimated 70 percent of Indians cannot afford a healthy diet.

Inflationary pressures on food prices are expected to continue due to various factors related to climate as well as speculative finance. The introduction of a 5 percent goods and services tax (GST) on packaged food items including rice, wheat, curd, lassi, papad and honey in July this year could lead to further food price hikes.

There is also a need to understand the structure of food inflation in India and address various issues related to production, trade, storage and transportation for different crops. The solution to food inflation then, as some experts have suggested, may not lie in traditional monetary policy interventions. Inflation-targeting may in fact worsen the situation by reducing the incomes of the poor further. 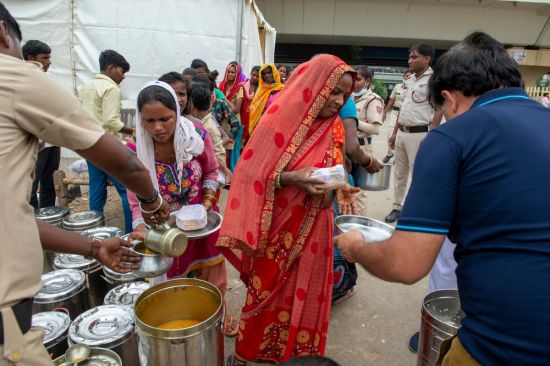 Delayed rains and low productivity in the current rice season mean rice production could decline by about 15 percent over last year. How this might impact rice procurement by the government remains to be seen. With rising prices and supply shocks, the government may need to offer farmers higher prices to maintain rice stocks.

Although only cereals are distributed through the government rations scheme known as the Prime Minister’s Garib Kalyan Anna Yojana (PMGKAY), they could prove critical as food prices continue to rise. PMGKAY helps people maintain their cereal consumption even during increases in prices of staples and frees up money which people can then spend on other foods.

There is apprehension that the scheme may not be extended, given the strain on domestic food production and availability of foodgrains. India’s public procurement of wheat in 2022 has been half that of previous years. This was partly due to the fall in production of wheat caused by heatwaves but also because market prices rose above the minimum support price (MSP) offered by the government diverting grain to private trade.

The expansion of the Public Distribution System (PDS) as well as using other government schemes such as the school midday meals and anganwadi services (for children under six, pregnant and lactating women), are important measures protecting people from hunger.

The PDS offers subsidized food grains to eligible households. Public pressure during lockdowns led to a brief expansion in the number of beneficiaries in states such as Delhi. Though temporary, the widening of coverage included groups who were particularly hard hit by the unforeseen and severe lockdowns, such as migrant workers who were suddenly unemployed. India’s food subsidy programs have the capacity to respond to increased demand. Thoughtful adjustment would reap large-scale benefits.

Despite continuing hunger and food deprivation, allocation under the distribution scheme has returned to levels for “normal” times. The scheme is now limited to those who were eligible for it before the pandemic, jeopardizing the food security of a large number of impoverished people. A reading of the food security laws that does not factor in yearly population growth has prevented the government from expanding the pool of eligible beneficiaries.

In the early days of the stringent lockdown of 2020, many experts urged the government to make universal or at the very least significantly expand the distribution scheme to ensure ease of access to food rations. Indian economist and Nobel Economics laureate Amartya Sen advocated making “feeding arrangements” on a “national scale” and being attentive to the crisis of employment faced by vast numbers of the poor.

To some extent, an expansion of the food distribution system did take place. First, the central government temporarily increased subsidized food rations for existing holders of ration cards (official documents that entitle eligible families to subsidized food grains). Second, some state governments temporarily extended rations to households that did not have ration cards. 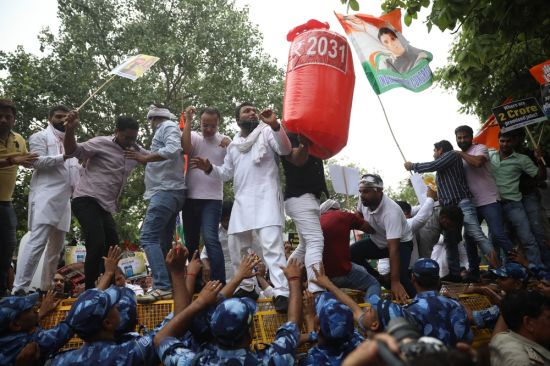 Youth members of the Congress Party protest inflation, Delhi, July 2022: Food prices have been going up due to global as well as domestic factors, mainly related to supply shocks and global increases in oil prices (Credit: Photo Delhi / Shutterstock.com)

The expansion of the subsidized grain system for existing beneficiaries was important and expansion beyond existing ration-card holders was also crucial. But the Delhi Rozi Roti Adhikar Abhiyan (Delhi right to food and work campaign) reported access to the scheme for those without ration cards was initially via e-coupons. This system was, however, inaccessible for many because those in need of rations generally did not have access to the internet or smartphones to apply for the e-coupons.

Later, the system was modified to allow registration at food-distribution sites. But beneficiary numbers were so limited this translated into long periods of waiting, with no guarantee of receiving grain. Many in need could ill afford to lose a day’s work and were therefore unable to access the rations.

A substantial number of those outside the distribution scheme should normally have had access to ration cards: 75 percent of the rural population and 50 percent of the urban population were supposed to be covered under the “rights-based framework” of the National Food Security Act (NFSA) 2013. But the proportion of the population covered in 2020, when the pandemic struck, was far lower than this. The distribution scheme had been capped based on the most recent population figures available in 2013, and these dated back to the 2011 census.

India’s food security act relies on population estimates in the census. The government then also applied a ceiling on the population to be covered, based on 2011 Census data, and this limit was to be applicable until data from the next population census becomes available. The next census is the decadal census of 2021, for which enumeration is yet to begin.

Another interpretation of the food security act in keeping with its legal framework is that a yearly revision of the number of eligible persons should be done using an annual projection of population. This projection should be based on population growth rates calculated from census data.

The act also specifies that two kinds of entitled households may be covered under the distribution scheme: “priority households” and Antyodaya Anna Yojana (AAY) households. AAY is a scheme launched by the government in 2000 to address the food security needs of the poorest and most vulnerable households. These included households headed by widows, terminally ill people, the disabled or people aged 60 years or above with no assured means of subsistence or societal support. Because of their vulnerability, the monthly food entitlement of AAY households is usually higher than that of priority households.

The numbers covered under the AAY scheme are now expected to decline over time, and by 2017, two years after the control order was issued, grain allocations under the AAY had reduced to virtually nil. The legal framework of the food security act in no way compels the executive to restrict implementation in such a manner.

Effective implementation of rights-based legislation such as the NFSA depends on ongoing assessment of eligibility. To support this, numbers of eligible persons in rural and urban areas could be revised upward each year. Also, state governments should issue ration cards on an ongoing basis. This alone would ensure the entitled proportion of rural and urban populations could access cheap grain. For this, updated lists of entitled households could be made publicly available. This legal requirement is not being followed in Delhi and elsewhere.

Regularly expanding the beneficiaries and being transparent about eligibility would help ensure India’s food subsidy program delivers for those who need it.

This article is an edited combination of two separate pieces written by the authors – Dipa Sinha and Nandini Nayak of Dr BR Ambedkar University Delhi – and published under Creative Commons with 360info.

Singh, Preeti. (May 6, 2021) “The Covid-19 Crisis and the Failure of Educated India”, AsiaGlobal Online, Asia Global Institute, The University of Hong Kong. 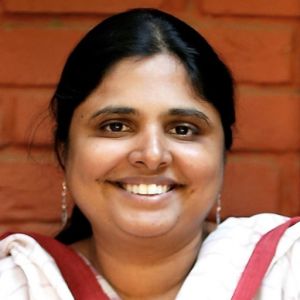 Dipa Sinha is assistant professor in the School of Liberal Studies at the Dr BR Ambedkar University Delhi. 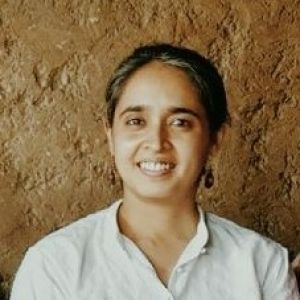 Nandini Nayak is assistant professor at the School of Development Studies of the Dr BR Ambedkar University Delhi. Her research is on the implementation of social policy, especially as related to the National Food Security Act and the National Rural Employment Guarantee Act.