The international community has failed in persuading Myanmar’s generals to reverse course from the destructive path they took when they launched the February 1, 2021, coup that toppled the duly elected government of Aung San Suu Kyi. Vasuki Shastry of Chatham House asks if the Covid-19 vaccine could be a lever to change the junta’s behavior and save lives. 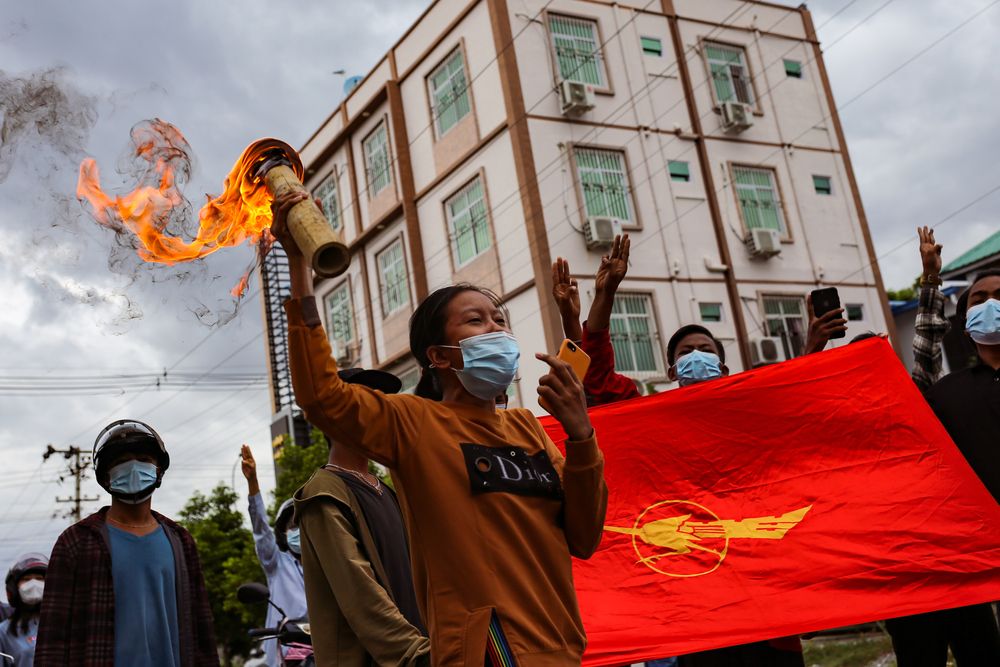 Anti-junta protest by National League for Democracy supporters in Mandalay, July 18, 2021: Thousands of Myanmar citizens have died as a result of clashes with the Tatmadaw (Credit: Sai Han One / Shutterstock.com)

Six months after the military coup in Myanmar which toppled state counsellor Aung San Suu Kyi and her elected government, the international community’s ineptitude in dealing with the crisis has been evident.

With a new US administration intent to working together with allies and partners to address crises around the world – the paramount challenge being Covid-19 – there were high hopes of a cohesive response to the collapse of democracy in the Southeast Asian nation, which had been entangled in an uneasy and complicated transition from martial rule. Could the international community overcome geopolitical rivalries and preoccupation with the pandemic to work with resolve to restore civilian rule in Naypyidaw?

Those expectations never turned to reality. Instead, what played out has been a spectacle of terror as General Min Aung Hlaing and his cronies have brutally suppressed unprecedented protests and have hunkered down for the long haul. On August 1, Min Aung Hlaing anointed himself prime minister and extended the state of emergency until August 2023. This forecloses an early resumption of political dialogue and further diminishes the prospects for Suu Kyi and her ruling National League for Democracy (NLD).

General Min Aung Hlaing’s latest move is surely a sign of the junta’s confidence in its staying power. By contrast, the international community has looked weak and hopelessly divided, with global public attention to the Myanmar situation waning. The G7 has thrown everything but concrete action on the issue, addressing the brazen acts of the generals with thunderous statements, sanctions, and calls for unity, all of it yielding little if any progress. 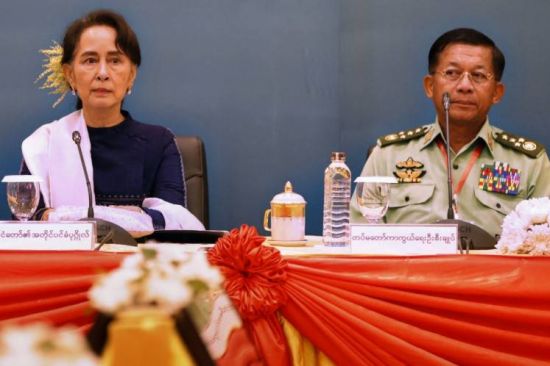 Aung San Suu Kyi and the general: The fragile political balance tipped when the military launched the February 1 coup (Credit: Ministry of the Office of the State Counsellor)

On August 4, 2021, after several months of dithering, the regional grouping ASEAN, of which Myanmar is a part, finally appointed a special envoy to Naypyidaw. Erywan Yusof, the second foreign minister of Brunei, however, lacks regional heft and influence, which will work to the advantage of the junta. Min Aung Hlaing is doubtless aware that some of ASEAN’s other nine members such as Thailand openly support the coup. In the past, ASEAN states had assured the world that quiet diplomacy – “constructive engagement” – would bring the country once known as Burma in from the cold of the pariah. It did to some extent, but the coaxing was always painfully slow and tedious.

In June, the diplomacy turned surreal with the visit of Min Aung Hlaing to Moscow, where he was feted and kept furnished with arms in Vladimir Putin’s latest attempt to sow confusion and destabilize the American order. Even mighty China, which supposedly had the clout and influence with the Myanmar generals, has not moved the needle much.

Yet, despite the lack of progress, is there a reasonable pathway for the international community to influence the political outcome in Myanmar?

The “harsh reality” is that there is no appropriate diplomatic tool that can resolve the situation, retired senior Singapore diplomat Bilahari Kausikan, now chairman of the Middle East Institute at the National University of Singapore, argued in a July 24, 2021, opinion piece in The Straits Times newspaper. ASEAN, he advised, should take care not to “take on actions that are not in its interests or are beyond its capabilities”.

At a United Nations Security Council meeting on Myanmar on July 29, 2021, Jeffrey DeLaurentis, senior advisor for special political affairs at the US Mission to the UN, was scathing about the 15-nation panel’s failure to act. “This council is failing in our collective responsibility to safeguard international peace and security,” he concluded. “And it is failing the people of Burma. We must do more, and we must do more now”.

The two diplomats are right in suggesting that the international and regional architecture for resolving a domestic political crisis such as Myanmar’s is broken. For the last three years, the US and its regional partners, including the 15-member Lima Group, have attempted to displace Nicolas Maduro in Venezuela with little to show for their efforts. As a major oil producer located near the continental United States, Maduro would surely have been crushed during an earlier period when Washington was wont to take aggressive action in its neighborhood. Consider the cases of American covert and overt intervention in its hemisphere since the 1950s – Guatemala, Cuba, the Dominican Republic, Chile, Nicaragua, Grenada and Panama.

Located thousands of miles away from the White House, resource-rich Myanmar does not have the same caché in foreign policy circles in Washington. And Nobel Peace Prize laureate Aung San Suu Kyi’s saintly status has been much diminished by her handling of the Rohingya humanitarian crisis, which resulted in a major refugee emergency, mainly in next-door Bangladesh.

Individual and institutional sanctions imposed by the US Treasury will not have the same impact in Myanmar in the same way as it has in Venezuela’s heavily dollarized economy. Learning lessons from previous sanctions, the Myanmar Armed Forces, known as the Tatmadaw, has diversified its foreign exchange strategy and reduced its dependence on the dollar, with the Russian ruble and Chinese yuan being their preferred currencies. The military rulers are also astute in using barter to access foreign goods and services in exchange for natural resources. This stands in stark contrast to the streets of Yangon or Mandalay, where the dollar reigns. Further sanctions could drive greenback transactions underground, trigger a liquidity crunch, and hurt only Myanmar citizens who have resolutely protested the coup.

Global diplomatic disarray and further international isolation and sanctions may actually play to Min Aung Hlaing and the other generals’ favor, providing conditions that could cement their hold on power. The Tatmadaw have seen it all before. Between General Ne Win’s coup in 1962 and the pro-democracy protests of 1988 (which toppled the strongman from power), Myanmar shut itself from the rest of the world to implement the brutal “Burmese Way to Socialism”. 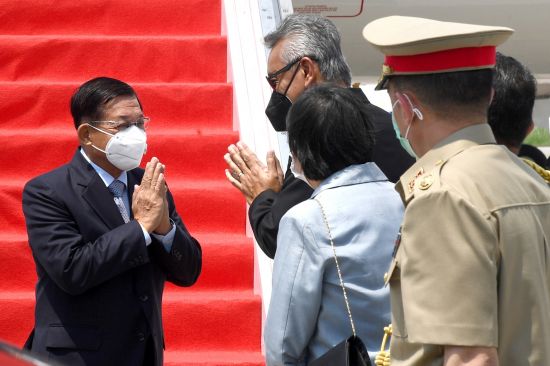 Diplomacy or isolation?: Min Aung Hlaing arrives in Jakarta for an ASEAN crisis meeting, April 23, 2021 (Credit: Cabinet Secretariat of the Republic of Indonesia)

That coup impoverished what had been Southeast Asia’s richest country and one of the region’s most promising economies. The new generation of generals who assumed power after denying the NLD’s legitimate victory in the 1990 elections adopted the Ne Win’s playbook with slight modifications. There would be limited foreign investment in resource extraction, which nourished and benefited the military, but no political reforms. In this context, the blossoming of democracy and free enterprise in Myanmar since 2011 is an aberration. As things stand, Min Aung Hlaing is well positioned to turn the clock black. And it is safe to assume that when and if elections are held, the outcome will be pre-ordained in favor of army-supported parties to the exclusion of Suu Kyi and the NLD.

While there may be few pieces to play on the diplomatic chessboard, there might yet be one opening gambit that countries concerned about the situation in Myanmar could play. This group of nations – the US, Japan, a few ASEAN members notably Indonesia, the UK and possibly India – share an interest in protecting the fragile political balance that existed in Myanmar before the coup. While this potential contact group might have limited tools at their disposal and not much leverage over the generals, there could be one tactic that could draw the junta to the board.

Like many countries in the region, Myanmar is reeling under a health and economic crisis due to the pandemic. Covid-19 is raging across the country, with daily cases touching 6,000 and the cumulative caseload above 270,000. Both Russia and China have committed to provide a total of 8 million doses of their vaccines, but that total is woefully inadequate for a country of 54 million. Should Myanmar face a Delta-variant surge as neighbor India and other ASEAN members are experiencing, the country simply could not cope, given its poor medical infrastructure.

The Covid-19 Vaccines Global Access initiative, known as COVAX, could prove a powerful lever for a Myanmar contact group to wield with the generals – the promise of increased doses in exchange for a resumption of dialogue among the national political parties, even though such talks might have limited utility since the generals appear determined to remove the NLD from the political mainstream. Still, Myanmar is no North Korea, where people are afraid to speak up. Indeed, thousands of brave Myanmar citizens have died in recent months as a result of clashes with the Tatmadaw. In a different context, the vaccines-for-behavior-change approach appears to have worked in the Philippines, also an ASEAN member. President Rodrigo Duterte recently acknowledged that it was American shipments of Covid-19 vaccines which eventually persuaded him to keep the Visiting Forces Agreement (VFA) after threatening to scrap it.

It also bears remembering that the Myanmar military regime has a track record of turning away humanitarian aid to maintain the country’s isolation and shield it from foreign interference. In 2008, when Cyclone Nargis slammed Myanmar, causing one of the worst natural calamities in its history, the leadership initially refused international relief, prompting calls for the UN to invoke the principle of the “responsibility to protect” to justify intervening without the government’s permission.

The international community has a collective responsibility to protect Myanmar citizens who have suffered so much in recent months, even as Covid-19 is further destroying lives and livelihoods. Blanket sanctions, fire and brimstone rhetoric, and the withdrawal of foreign investment have only emboldened General Min Aung Hlaing. However shrewd and ruthless he might be, the general is no match for the deadly Covid-19 virus which he can only suppress with international support through medical supplies, protective equipment, oxygen cylinders – and vaccines. While it may be deemed as politically incorrect in humanitarian terms, the contact group must exploit this vulnerability and do so with dispatch.