After a resounding election victory in Myanmar, the incumbent National League for Democracy government is preparing for its second term. Its delicate balancing act – running the government while finding ways to work with the powerful military – has been made more complicated by the pandemic and the resulting economic challenges. Simon Tay, author of a new book on Myanmar, and Sarah Loh, both at the Singapore Institute of International Affairs, outline the post-election priorities for the country, noting that there is pressure on The Lady, national leader Aung San Suu Kyi, to plan her succession. 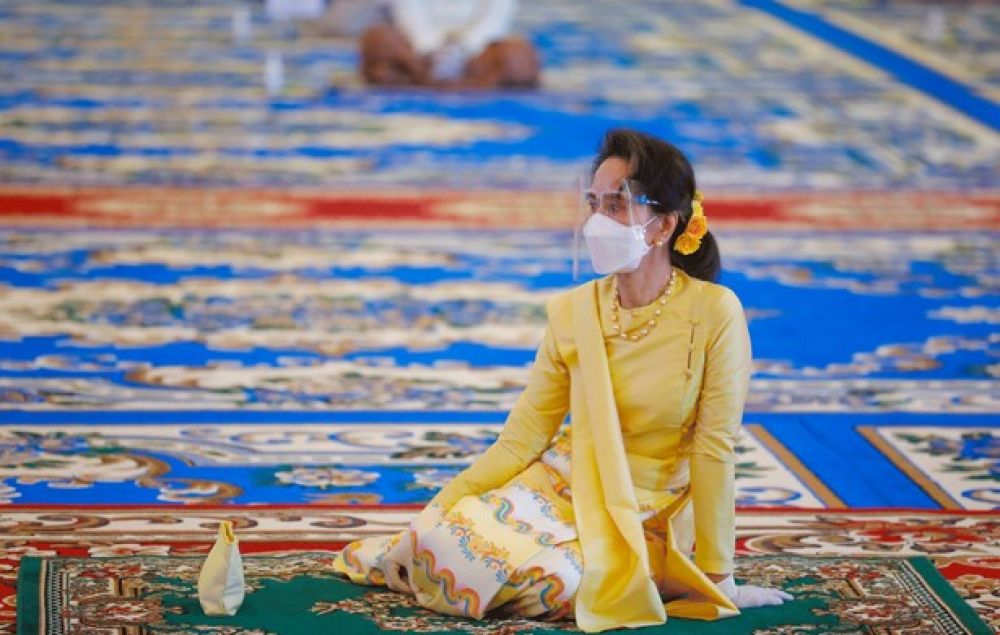 The Lady masked: After a resounding victory for her National League for Democracy, Aung San Suu Kyi will need to tackle the pandemic and pursue other priorities including pushing through further reforms, boosting trade and investment, and addressing the Rakhine State crisis (Credit: State Counsellor Office, The Republic of the Union of Myanmar)

Myanmar’s democratic general elections took place on November 8, 2020, as scheduled, despite the Covid-19 pandemic, with the incumbent National League for Democracy (NLD) winning more than 80 percent of the contested seats and able to form a new government. Official results from the Union Election Commission show that the NLD did even better than in 2015, when free and fair elections returned. The 2020 results give the NLD an increased majority in both houses of parliament – in the lower house from 255 to 258 seats (out of 330); and in the upper house from 135 to 138 seats (out of 168).

While many had expected the party to win, few expected it to do as well as it did, citing the NLD’s underperformance in delivering on economic reforms during its first term. The NLD’s sweep may be attributed to several factors: First, party leader and State Counsellor Aung San Suu Kyi’s status was bolstered when she personally defended Myanmar at The Hague on charges of alleged genocide relating to the Rakhine State and Rohingya people. Second, the fear of Myanmar people that military rule could return since they are automatically given 25 percent of all parliamentary seats and have potential allies in other parties. Third, a recognition among voters that a stable and strong government is imperative to tide the country through Covid-19.

Restrictions and social distancing rules also made campaigning more difficult for new political entrants who might have potentially challenged the NLD. These include the People’s Party led by Ko Ko Gyi of the 88 Generation; the People’s Pioneer Party led by Thet Thet Khine, a well-regarded businesswoman previously part of the NLD; and the Union Betterment Party led by U Shwe Mann, a former military general and speaker of parliament during the transition years of the U Thein Sein government, who has since been allied with The Lady.

Some questions were raised about the legitimacy of the vote, including allegations of fake stamps to mark those who had already cast their ballot, boxes with broken seals, and the cancellation of polls in ethnic areas including the disfranchisement of 73 percent of eligible voters in Rakhine State. Many of these complaints came from the military-backed Union Solidarity and Development Party, which failed to improve on their poor performance in 2015. But Defence Services Commander-in-Chief Senior General Min Aung Hlaing said he would accept the result, as did international observers.

What lies ahead for the NLD in its second term? There are multiple challenges to consolidate democracy, reform and open the economy to create jobs and attract investment, and deal with the pandemic, with infection rates on the rise since the elections.

The most urgent task will be to address the pandemic. As of 8 December, reported infections in Myanmar have exceeded 100,000 with up to 1,500 cases daily. By comparison, five months ago, fewer than 10 new cases were reported daily. Myanmar’s weak health system is already stressed and there is an urgent need for the government to increase medical and testing capacities. Reaching out to the international community to assist will be necessary.

Additionally, the government must alleviate the enormous impact on the economy overall and the livelihoods of ordinary citizens. It has already announced a Covid-19 Economic Relief Plan (CERP) and a medium-term Economic Recovery and Reform Plan to set out the priorities. But implementation will be key and the time and room for maneuver are limited.

The World Bank predicts that Myanmar’s growth will fall from 6.8 percent to 0.5 percent from fiscal year 2018-19 to 2019-20. This is the lowest forecast since the transition from dictatorship to military rule in 2011. A survey by the World Bank covering 500 firms revealed that the proportion of enterprises not expecting to recover from the pandemic reached 41 percent in October, up from 29 percent in May. While Myanmar remains among the few economies expected to grow amid the global recession, this may change, given that the economic impact of the second outbreak may widen and become more severe.

Pursuing further reforms and attracting investors are therefore critical. After the 2015 elections, the NLD government gave business issues scant attention – and momentum was lost. Over the past two years, however, the NLD government took efforts to reform, reduce red tape and introduce clearer rules. There is hope that the recently signed Regional Comprehensive Economic Partnership (RCEP) agreement will further boost trade and investments with fellow ASEAN member states and other countries that are part of the pact, including China and Japan.

The Myanmar Investment Promotion Plan and an overall Myanmar Sustainable Development Plan are also in place, with set principles aligned to international standards and a database of key infrastructure projects available for potential investors to review. The NLD also created the Ministry of Investment and Foreign Economic Relations to prioritize investments. Investment laws were enacted, and the outdated Companies Law revised. There is also optimism about Myanmar’s consumer market and fast-moving digital economy.

Infrastructure is a priority sector under the CERP, as it can help accelerate economic recovery. The government has said that it will continue to prioritize power generation and energy infrastructure as electrification will attract more investment. Myanmar’s electricity demand is growing by 15 percent a year, though only 55 percent of current needs are met.

Under the Accelerated Rural Electrification Project, the Asian Development Bank (ADB) on December 5 approved a US$171 million loan to help Myanmar construct energy infrastructure in poorer areas across the country. This is expected to support inclusive economic growth and create jobs.

Dealing with the Rakhine State crisis 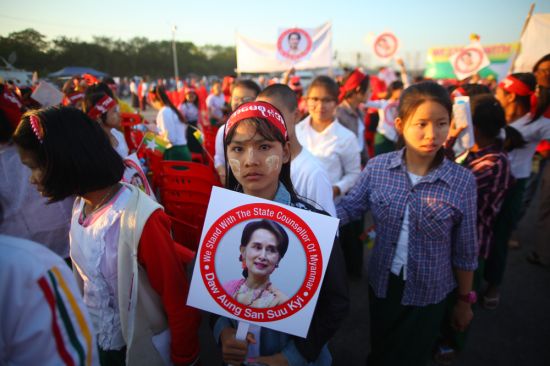 Still the one – but is it time to plan a succession?: While her reputation has taken a hit in the West, the State Counsellor remains popular with her people (Credit: kan Sangton / Shutterstock.com)

Managing the political transition will also be critical. For international observers, the Rakhine State crisis remains in the spotlight. The situation is complex and cannot be easily resolved, especially with strong sentiments within Myanmar against recognizing the Rohingyas claims to citizenship. Western countries have escalated their criticism since 2017 and have imposed limited sanctions.

Given the long and twisted roots of the crisis, an immediate solution will not be possible. But finding ways to manage the issue will be essential so that it does not become a lightning rod. Many investors will otherwise grow wary of potential escalation that could lead to more sanctions and reputational risk. The NLD must change policies to take progressive steps forward on this difficult matter and to shift perceptions and attract investment from the West. Failure to do so will mean that Myanmar would be able to depend only on partners in Asia and ASEAN. This risks the creation of an over-dependence on China – a sensitive issue for many for both local and geopolitical reasons. 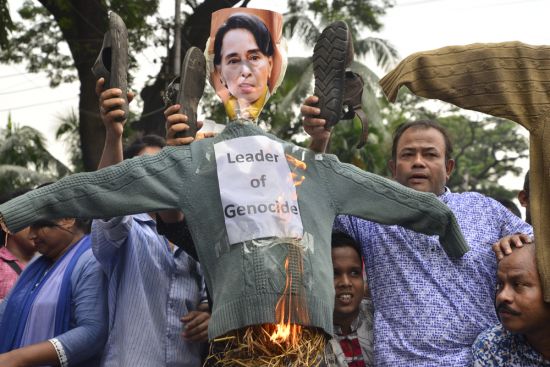 Progress in promoting peace and democracy

There are broader political concerns as well. The NLD and Aung San Suu Kyi have dedicated time and effort to the peace process with ethnic groups, hoping to continue her late father’s legacy. Shortly before he was assassinated, Aung San had raised hopes in the 1947 Panglong Conference for a unified Burma. Yet progress was always going to be difficult, and the NLD’s first-term peace efforts in the “21st Century Panglong” have shown little progress. Many ethnic groups have armed factions and de facto control over sections of the country, still fighting intermittent wars.

At the start of its second term, the NLD government must address perceptions that it is dominated by the majority Bamar people. One early signal will be in the appointments of the vice-president, and in the chief ministers for each state. The appointment of those who have standing and support from ethnic parties could pave the way towards greater stability and cooperation.

The broader issue that connects to the Rakhine State and ethnic group peace process is the NLD government’s relations with the military. Powers are divided under the Constitution, with the powerful Tatmadaw (the country's armed forces) guaranteed 25 percent of all parliamentary seats and control of key ministries for defense, border and home affairs. Many NLD priorities including amending the Constitution remain reliant on the military’s support.

Senior General Min Aung Hlaing: The NLD and its leader will have to continue their delicate balancing act – running the government while working with the powerful military (Credit: Office of the Commander-in-Chief of Defence Services)

While Senior General Min Aung Hlaing is expected to retire next year, the exact date when he might step down is not certain. Much depends on reaching some accommodation between the generals and NLD government, as had to happen with his predecessor Senior General Than Shwe. In this sense, while standing for the hope of democracy, the NLD government must find a modus vivendi and ways to cooperate with the military. Without such accommodation, the likelihood is that there will be little progress and possible instability in the country. The electoral victories for the NLD government in 2015 and 2020 are significant but are neither a panacea for the nation’s ills nor a “Hollywood ending” for the long-running tale of transition.

Optimism for 2021 and beyond

When the NLD was voted into power in 2015, they had to navigate a transition from heroic opposition to running the government. The party faced a steep learning curve as they lacked the experience and resources needed to lead the nation. They also struggled to navigate their relationship and co-existence with the military, whom they had deeply distrusted.

Yet, in the last two years of their first term, the NLD moved more quickly on reforms, perhaps a sign that they have gradually eased into their new role. There is thus cause for optimism that in its second term, the NLD will do even better in emphasizing economic reforms and attracting investment.

As the NLD prepares to embark on its second term in March next year, it has promised that its leaders will choose the right people for key cabinet positions. Looking ahead, the party will need to come up with a succession plan. While The Lady, who is 75 years old, is revered across the country and held in awe and even fear by many officials, there are also some who believe it is time for her to set in motion a transition by ceding more responsibilities to others and bringing in and testing new leaders. She would remain at the helm, steering and advising, pursuing the strong mandate she has received to move her party, government and country forward. 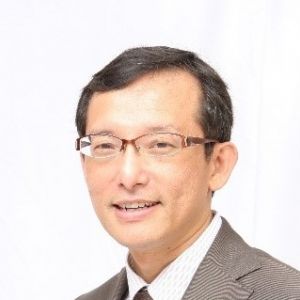 Simon Tay is chairman of the Singapore Institute of International Affairs (SIIA), a globally ranked and independent think tank. He is the author of Shadows Across the Golden Land: Myanmar’s Opening, Foreign Influence and Investment, which was published in October 2020 by World Scientific. 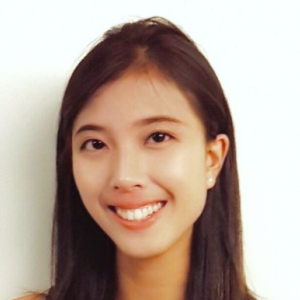 Sarah Loh is a policy analyst at the Singapore Institute of International Affairs (SIIA).