America First or America Isolated: The Case of the International Criminal Court

Donald Trump’s national security advisor, John Bolton, has acted on his long-stated distaste for the International Criminal Court by declaring it dead to the U.S. Though a few of Bolton’s protestations have merit, the U.S. is setting a dangerous precedent in condemning the court. 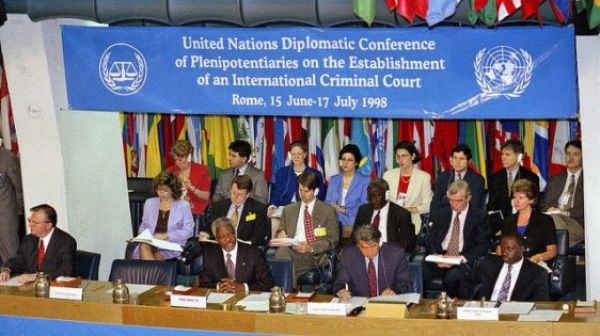 Photo courtesy of Coalition for the ICC.

In a major policy speech on September 10, 2018, United States National Security Advisor John Bolton launched a virulent attack on the International Criminal Court (I.C.C.). In his idiosyncratic view, “the largely unspoken, but always central, aim of its most vigorous supporters was to constrain the United States.” The U.S. will not join the I.C.C., will not cooperate with it, and will not provide it with any assistance. Instead, the U.S. will “use any means necessary to protect” its citizens: “If the court comes after us” or Israel, Washington will ban I.C.C. judges and prosecutors from entering the U.S., impose sanctions on I.C.C. funds held in the U.S., and prosecute I.C.C. personnel in U.S. criminal courts. Countries that cooperate with the I.C.C. in the investigation of Americans will risk losing access to U.S. economic and military assistance and intelligence.

In other words, the U.S. is now ready to deploy sanctions to coerce other countries into acting illegally. Remarkable.

“Strangle the I.C.C. in Its Cradle”

Last November, I.C.C. prosecutor Fatou Bensouda said the results of a preliminary investigation had established that “there is a reasonable basis to believe that war crimes and crimes against humanity have been committed” in Afghanistan since July 2002 (when the I.C.C. became operational) by Taliban, Afghan, and U.S. forces. This paved the way for a formal investigation that can be launched only by the I.C.C. judges. In a sign of nervousness and preemptive self-censorship, the I.C.C. took over a decade to conduct the preliminary investigation into allegations of extrajudicial executions and intentional attacks against civilians.

In other words, the U.S. is now ready to deploy sanctions to coerce other countries into acting illegally.

The response from Bolton, then a private citizen who had never concealed his deep hostility to the U.N.-centric global multilateral order, was blunt. Any investigation of Americans by the I.C.C. would be “a direct assault” on U.S. national sovereignty. Having “done more than any other nation to instill in its civilian-controlled military a respect for human rights and the laws of war,” the U.S. “should welcome the opportunity … to strangle the I.C.C. in its cradle.” He added, “Even merely contesting its jurisdiction” would risk acknowledging “the I.C.C.’s legitimacy.” Unfortunately for Bolton, the I.C.C.’s legitimacy has indeed been serially acknowledged and affirmed in several U.N. Security Council deliberations and decisions, with full U.S. participation, regarding I.C.C. cases.

Serious Problems with the I.C.C.

The landscape of international criminal justice has changed dramatically at astonishing speed. In 1990, a tyrant could confidently commit atrocities inside sovereign borders with impunity. Today, there is still no guarantee of prosecution and accountability; but no brutish ruler can be confident of permanently escaping international justice. The certainty of impunity is gone. The I.C.C., activated only if national authorities are unable or unwilling to prosecute, functions as a court of last resort for ending impunity for the perpetrators of the most serious crimes of concern to the international community.

But Bolton’s criticisms cannot be dismissed totally, for there are serious problems with the I.C.C. Created in 1998, it has 123 members. The extensive membership is misleading. Several major powers and populous countries have not joined. The 70-plus non-members represent two-thirds of the world’s population and armed forces. Former U.S. President Bill Clinton signed on in 2002 but did not submit the document for Senate ratification. In May 2002 President George W. Bush “un-signed” the U.S. from the I.C.C.

The number of convictions to date has been very few, and the court’s processes have proven time-consuming and inordinately expensive. There have been repeated charges of the court disproportionately targeting Africans, dismissing African views, and jeopardizing delicate peace negotiations. Although the threatened mass exodus as called for by the African Union on January 31, 2017, has not occurred, several countries have refused cooperation. For years Kenya has refused to hand over suspects to the I.C.C. In October 2017, Burundi became the first country to withdraw from the court following a parliamentary vote a year earlier, and South Africa immediately announced it would follow suit—only for its High Court to rule the withdrawal unconstitutional and invalid. In October 2016, Russia withdrew its signature from the I.C.C. statute.

The 70-plus non-members [of the I.C.C.] represent two-thirds of the world’s population and armed forces.

The list of non-cooperating states includes India. At the third India–Africa Forum in New Delhi in October 2015, the 41 African heads of government and heads of state attending included Sudan’s President Omar Hassan al-Bashir, who was under I.C.C. indictment at the time. When he accepted India’s invitation, Bensouda’s office pointed to Security Council Resolution 1593 (2005), calling on all states to cooperate fully with the I.C.C. “By arresting and surrendering ICC suspects,” the statement added, “India can contribute to the important goal of ending impunity for the world’s worst crimes.” India’s official response was that Resolution 1593 is not binding on I.C.C. non-signatories. India was happy to comply with its “statutory international legal obligations” but not necessarily other directives. There is thus substance to Bolton’s charge: “We will let the I.C.C. die on its own. After all, for all intents and purposes, the I.C.C. is already dead to us.”

Powers given to the U.N. Security Council, to refer cases to the I.C.C. and to defer cases already before the court, cross-infect judicial processes with the high politics of major powers. Giving a vote on these decisions to countries that are not I.C.C. members is a violation of the principle of natural justice. And the absence of a democratically chosen and accountable world legislature and executive does raise valid questions about the legitimacy and viability of the I.C.C. In no society in human history has a criminal justice system functioned without legislative and executive branches of government as essential prior props.

The I.C.C. can also be faulted for institutional integrity. As documented by the respected Africa experts Julie Flint and Alex de Waal, its first prosecutor was morally compromised. The I.C.C. did not distinguish itself in its handling of the allegations of sexual misconduct by him against a South African journalist trying to interview him in his hotel room in 2005. Rather surprisingly, the case has not attracted fresh attention in the wake of the #MeToo movement.

The U.S. Is Cherry-Picking Global Norms

A year ago, citizen Bolton advised Trump to send Bensouda “a terse note: ‘Dear Madame Prosecutor: You are dead to us. Sincerely, the United States.’” On September 10, National Security Advisor Bolton in effect implemented his own advice. Parts of his speech (e.g. the I.C.C. is a “European neocolonial enterprise”) descended into the theater of the absurd. But the thrust of his thesis is deeply sinister: “The only deterrent to evil and atrocity is …‘the righteous might’ of the United States and its allies—a power that, perversely, could be threatened by the I.C.C.’s vague definition of aggression crimes.” Coming from a senior official of the righteousness-free Trump administration, this merely proves this administration does irony without knowing it.

Intoxicated by the arrogance of power, neoconservative warriors seem to believe that the vast U.S. military superiority confers a matching moral superiority. Furthermore, the same combination of might and virtue empowers and entitles them to construct a world in which all others have to obey universal norms and rules, but Washington can opt out whenever, as often, and for as long, as it likes on cherry-picked global norms with respect to nuclear weapons, landmines, international criminal prosecution, climate change, and international trade regimes. In a world of inexorable power shifts, this equation just does not compute.