The world is once again in dismay after the use of chemical weapons was reported in Douma. In response, the U.S. struck, together with the UK and France, chemical weapons facilities in Syria on April 13 and 14. The stated purpose was to uphold international law, but the action could have far-reaching—and destabilizing—consequences. 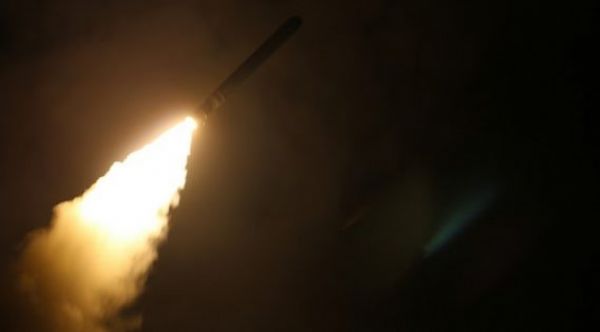 A Tomahawk land attack missile fired by the U.S. at a target in Syria on April 14, 2018. Photo courtesy of Kallysta Castillo via the U.S. Navy.

In striking Syria with missiles on April 13 and 14, the U.S., UK, and France said the aim was to uphold international law against the use of chemical weapons. But does this argument hold water? The Syrian crisis shines a spotlight on the roles that morality, legality, strategy, and institution-building play in underpinning the world order.

International humanitarian law prohibits the use of chemical weapons. But in their effort to enforce this, the three countries arguably violated international law governing the use of force. According to the UN Charter, military force may be used only in two situations: in defence against armed attack, or when authorized by the UN Security Council. The missile strike on Syria had not received UN authorization. Even if Syrian President Bashar al-Assad were in due course proven to be responsible for the use of chemical weapons, the attack on Douma did not constitute one on the U.S. or its allies.

There are also questions of due process. In 2003, a group called Veteran Intelligence Professionals for Sanity sounded warnings about false claims of weapons of mass destruction in Iraq. On April 13, it asked U.S. President Donald Trump to “obtain and review actual evidence from the site of the alleged chemical attack in Douma, Syria, before ordering any military action.”

The Syrian crisis shines a spotlight on the roles that morality, legality, strategy, and institution-building play in underpinning the world order.

The call was not to do nothing, but to decide on appropriate action after the Organisation for the Prohibition of Chemical Weapons (OPCW) has done its work and compelling evidence has been presented. This due process would examine the possibility of the attack on Douma being a false flag operation (as some are alleging).

In addition to degrading Assad’s chemical weapons capabilities, this strike by the U.S. may serve to further devalue the role of laws and norms in regulating state conduct. For a long time after 1945, the U.S. held an important role in creating and policing the liberal international order. Today, the destructive and disruptive capacity of the U.S. exceeds its ability and will to be creative in developing a new world order architecture.

The U.S., No Longer the Guarantor of a Peaceful World Order

Such an architecture would necessitate strengthening autonomous investigative and prosecutorial agencies, such as the 192-member OPCW. The U.S. contributes almost one-quarter of its €67 million annual budget. Instead of supporting OPCW's work, however, the U.S. used its financial clout to push for the removal of OPCW’s first director-general, José Bustani (1997–2002).

Neither Russia nor the U.S. is in total control of its proxies [in the Syrian civil war].

Many, including Bustani himself, saw his dismissal as a result of his efforts to place OPCW inspectors in Iraq, which would have impeded the U.S. invasion of the country. The Administrative Tribunal of the International Labour Organisation ruled that the removal was “unlawful.” In addition, it observed that such an “unacceptable violation” of the principles governing the tenure of international civil servants would render them “vulnerable to pressures and to political change.”

If countries are so certain of their information that they are prepared to act on it militarily before independent investigations have concluded, then they should be prepared to accept penalties if proven wrong. But we know from a long history of foreign interference in the Middle East that none of the protagonists of this incursion are likely to be called to international criminal account in the foreseeable future.

Diplomatic Ripples Around the World

The Syrian civil war is a multi-layered and complex conflict involving a multitude of local and foreign actors. Neither Russia nor the U.S. is in total control of its proxies.

A recurring flaw in U.S. foreign policy in recent decades has been the imperative to “do something.” The U.S. is prone to giving in to this urge without first clarifying its broader and longer-term strategy. A one-off strike is not a game changer in any conflict.

The strike signaled a determination to punish Assad for violating publicly declared U.S. red lines on the use of chemical weapons. By limiting the targets precisely to chemical arms facilities, the U.S. calculatingly avoided crossing Russia’s red lines. There is no effective retaliatory measure Moscow can take. Its protests will be confined to diplomatic huffing and puffing at the UN. For all the paranoia about the menacing bear on Europe’s eastern borders, the strike demonstrates Russia’s limitations as a military power vis-à-vis the U.S.

A recurring flaw in U.S. foreign policy in recent decades has been the imperative to “do something.”

The strike also shows the impotence of the UN in checking illegal uses of force and breaches of international law by the major powers, whether it be the U.S. strike on Syria or Russia’s invasion of Ukraine and annexation of Crimea.

In this instance, British Prime Minister Theresa May avoided former Prime Minister David Cameron’s strategic mistake in 2013 of seeking parliamentary approval prior to joining an attack. But, only 22 percent of Brits back military strikes in Syria. Circumventing parliamentary scrutiny to team up with the most erratic and unpopular U.S. president in recent history could prove politically costly.

North Korean leader Kim Jong-un would have closely watched the U.S.-led attack on Syria. Based on the Kim regime’s past statements on the fate of Libya’s Muammar Gaddafi and Iraq’s Saddam Hussein, the Syria strike is likely to spur North Korea to shore up its nuclear capabilities.

Most consequentially for the Asia-Pacific, the strike on Syria will reinforce China’s faith in a powerful military, and confirm its contempt for international law as a restrictive leash on great powers. In recent years, Beijing has consciously modeled its behavior as a great power on U.S. precedents, and the implications are far from salubrious for other countries in the region.