Trump and the Nuclear World Order

In its Nuclear Posture Review released in February 2018, the Trump administration introduced new types of weapons and expanded the circumstances for justifying their use. This reverses nuclear arms control gains acquired through decades of delicate global negotiations. 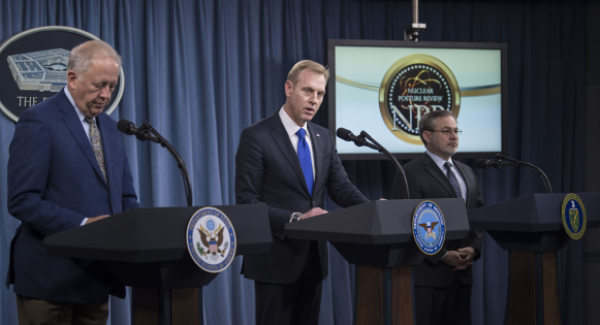 Press briefing on the 2018 Nuclear Posture Review. Photo courtesy of Kathryn E. Holm via the U.S. Department of Defense

Ideally, a Nuclear Posture Review (NPR) should provide intellectual guidance to military planners; reassure Americans, allies, and friends; and deter would-be adversaries. It also shapes global nuclear norms like deterrence, non-proliferation, security, and non-use. The Trump administration’s 2018 NPR, released in February and based on the consensus view of the civilian and military leadership, is now the official policy guide that will shape US nuclear decision-making, modernization, targeting, and signaling. It is likely to unsettle Americans and allies, launch a new nuclear arms race, and elevate nuclear threat levels around the world.

Expansive Vision of the Role of Nuclear Weapons

President Barack Obama’s 2010 NPR had argued that by “reducing the role and numbers of U.S. nuclear weapons … we can put ourselves in a much stronger position to persuade our NPT [Nuclear Non-Proliferation Treaty] partners to join with us in adopting the measures needed to reinvigorate the non-proliferation regime.”

On August 2, 2017, US Air Force General Paul Selva, vice chairman of the Joint Chiefs of Staff, said the future of nuclear deterrence lies in smaller, low-yield, usable nuclear weapons. Where previous NPRs had tried to trim the types of nuclear weapons in the US’ arsenal, the 2018 NPR promises to introduce two new types: a low-yield warhead for the Trident submarine-launched ballistic missile (SLBM) and a new nuclear-armed sea-launched cruise missile (SLCM), in order to “provide additional diversity in platforms, range, and survivability, and a valuable hedge against future nuclear ‘break out’ scenarios.” The US will reduce the time required to develop and produce a new warhead.

Where previous NPRs had tried to trim the types of nuclear weapons in the US’ arsenal, the 2018 NPR promises to introduce two new types.

The 2018 NPR also reverses past efforts to limit when the bomb might be used by widening the circumstances in which the use of US nuclear weapons might be contemplated and justified. Of particular note in this regard is the frequency of references (14 times, according to Oliver Meier, deputy head of the International Security Division of the German Institute for International and Security Affairs) to nuclear retaliation against non-nuclear strategic attacks (e.g. a cyberattack on critical infrastructure). The combined effect of the various changes is to dramatically reduce the normative gap between conventional and nuclear weapons and lower the threshold at which nuclear weapons can be used.

From the dawn of the nuclear age, activists, NGOs, governments, and the UN have been relentless in putting in place planks of an increasingly rigorous normative architecture to limit (1) the spread of nuclear weapon technology, materials, and arsenals; (2) the numbers of nuclear warheads; and (3) the circumstances in which these terrible weapons might be used.

Three years ago, Alexei Arbatov, head of the Center for International Security at the Primakov National Research Institute of World Economy and International Relations, warned that nuclear arms control may be nearing its own end of history, with stalled negotiations and softening norms: “Existing treaty regimes are eroding and … may collapse in the near future,” resurrecting risks of and plans for the use of nuclear weapons in combat. President Donald Trump is deeply skeptical of multilateralism in general and multilateral nuclear arms control in particular, and Washington is retreating from any responsibility for constructing any global order.

The identification of Russia and China as the major strategic threats in official US documents in 2018 removes the fiction that nuclear modernization and upgrades are needed to counter “rogue” states like Iran and North Korea.

As always, each side describes its actions and developments as defensive, designed to counter enhancements by the other side. The end result is the resurgence of the Cold War dynamic where Moscow and Washington try to outmatch each other with new nuclear weapons.

The identification of Russia and China as the major strategic threats in official US documents in 2018 removes the fiction that nuclear modernization and upgrades are needed to counter “rogue” states like Iran and North Korea. The NPR levels three charges against Russia and China: “They have added new types of nuclear capabilities to their arsenals, increased the salience of nuclear forces in their strategies and plans, and engaged in increasingly aggressive behavior, including in outer space and cyber space.”  This is disputed by Russian analysts as a solution to a non-existent problem.

On March 1, 2018, Russian President Vladimir Putin boasted of a new array of invincible nuclear weapons that can penetrate any defenses to reach anywhere in the world. He noted that the US had not heeded Russian warnings when President George W. Bush pulled out of the 1972 anti-ballistic missile (ABM) treaty in 2001. “I would like to tell those who have been trying to escalate the arms race for the past 15 years, to gain unilateral advantages over Russia, and to impose restrictions and sanctions … The attempt at curbing Russia has failed,” he said.

Meanwhile, the official paper of the People’s Liberation Army has called for China to strengthen its nuclear deterrence and counter-strike capabilities in order to match the developing US and Russian nuclear strategies.

Ramping up nuclear weapons development and deployment contributes to the normalization of the discourse of nuclear weapons use. The confidence of the Trump administration in its capacity to control escalation is unlikely to be widely shared. The more that Putin and Trump revalidate the role of nuclear weapons in guaranteeing their respective national security, the more they undermine efforts to delegitimize the nuclear weapon aspirations of Kim Jong-un and buttress pro-nuclear arguments in Japan and South Korea.

The Ban Treaty as an Alternative Normative Framework

The retreat from multilateral nuclear leadership, coupled with the emphatic rejection of nuclear disarmament, will complicate life for US allies in Europe and the Pacific in a global nuclear order that is already bifurcated between the NPT and the 2017 nuclear weapons ban treaty. The treaty embeds the collective moral revulsion of the international community at the most inhumane and indiscriminate weapon invented by man in the effort, possibly vain, to foreclose the very possibility of a nuclear war. The NPR will increase the attraction of the ban treaty as an alternative normative framework for closing the legal gap on nuclear abolition and increasing global pressure on the nuclear powers to cap, reduce, and eliminate their nuclear stockpiles.

The more that Putin and Trump revalidate the role of nuclear weapons in guaranteeing their respective national security, the more they undermine efforts to delegitimize the nuclear weapon aspirations of Kim Jong-un and buttress pro-nuclear arguments in Japan and South Korea.

The NPR makes only one reference to the ban treaty—the most significant development in multilateral nuclear arms control in decades—to attack it on two grounds. The treaty is alleged to have “polarized the international community and seek to inject disarmament issues into nonproliferation fora, potentially damaging the nonproliferation regime.” In addition, the treaty “could damage U.S. security and the security of many allies and partners who rely on U.S. extended nuclear deterrence.”

Four heavyweights from the Euro-Atlantic Security Leadership Group advocate that “countries should work to preserve and extend existing agreements and treaties that are crucial to sustaining transparency and predictability. The demise of the arms control architecture will dramatically increase nuclear risks for all Europeans and indeed the world.” Instead of making enemies of the global majority—122 countries voted for the ban treaty last July—Trump should aim to make the ban treaty redundant by promoting effective measures to limit the numbers, roles, deployment, and usability of nuclear weapons.