Progress on a Nuclear-Free North Korea Stalled, Not Halted

As the dust settles on the Hanoi summit, critics argue that the absence of an agreement between Trump and Kim is a sign that diplomacy between the U.S. and North Korea has failed. But even without a roadmap to denuclearization, the summit promotes important goals in these early stages: dialogue, a continued freeze on nuclear testing, and hope for a gradual lifting of economic sanctions. 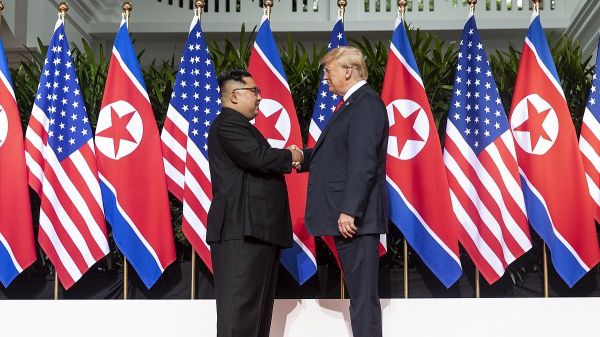 U.S. President Donald Trump’s much-anticipated summit with North Korean leader Kim Jong-un at the end of February ended early, with neither side coming away with tangible gains nor committing to further talks. Assessments, though, of the summit’s success or failure need first to consider where the summit sat in the context of recent U.S.-North Korea relations.

2017 was the year of nuclear testing, furious tweets, and name-calling. The year that followed turned East Asian international relations on its head, with North Korea’s coming-out on the international stage, historic handshakes, and burgeoning romance.

In 2018, North and South Korea competed together in the Winter Olympics and the leaders of the two Koreas, President Moon Jae-in and Kim, met three times. The surprising warming of inter-Korean ties was punctuated by the June 12 U.S.-North Korea summit.

In the lead-up to the summit, Pyongyang dismantled its Punggye-ri nuclear test site and released three American hostages, gestures of goodwill that Trump would later point to as tangible successes of his North Korea policy.

With Singapore playing host, the June 2018 summit was the first time a sitting U.S. president met with a North Korean leader. Trump and Kim signed an agreement that included a pledge for the denuclearization of the Korean peninsula, committing the U.S. and North Korea to working toward “peace and prosperity.”

In the weeks that followed, however, Trump came under fire for not extracting guarantees from Pyongyang on the specifics of what “denuclearization” actually means. Critics argued that promises to disarm are not enough and that North Korea has already advanced its ballistic and nuclear programs to the point where a testing pause makes little difference.

The Trump administration responded by saying that the summit was not supposed to solve the nuclear crisis, rather to set conditions for future talks in which North Korea would give up its nuclear arsenal in exchange for economic incentives.

Trump came under fire for not extracting guarantees from Pyongyang on the specifics of what “denuclearization” actually means.

The goodwill that culminated in the historic meeting continued. North Korea has not tested a nuclear device since September 2017, nor has it lobbed any ballistic missiles over Japan. In addition, Pyongyang returned the remains of 55 American soldiers killed during the Korean War and offered to accept international inspections of its nuclear sites.

Nevertheless, there has been no forward momentum on either side, with the U.S. refusing to lift sanctions and Pyongyang reportedly continuing to develop its nuclear weapons program. Thus, negotiations have languished.

The second Trump-Kim summit was expected to break the diplomatic stalemate and reignite impetus toward denuclearization. Instead, the impasse remains.

Before the first summit, the Trump administration considered “complete, verifiable, irreversible” denuclearization (CVID) as the only acceptable outcome. Things have since changed, as indicated by hawkish National Security Advisor John Bolton being sidelined in favor of “dovish” Secretary of State and ex-CIA chief Mike Pompeo.

The U.S. was expected to come to the summit more flexible and willing to listen. Trump stated that he wanted denuclearization, but also said that he was in no rush. He further praised the importance of his “personal relationship” with Kim, saying that without him, the U.S. and North Korea would be in a major war.

For Pyongyang, the Singapore summit was another moment in a year of diplomacy in which Kim went from evil villain to smiling statesman. Kim’s first meeting with Trump bought him international legitimacy and the suspension of U.S.-South Korea joint military exercises. Kim left Singapore confident that the “maximum pressure” driven by the U.S. had been defused.

Under these premises, at the top of Kim’s Hanoi wish list was an easing of sanctions. To achieve his goal and to provide evidence of a commitment to denuclearization, the North Korean leader proposed shutting down and dismantling the Yongbyon nuclear facilities. Negotiations collapsed on this point: Yongbyon was not enough of a bargaining chip for the lifting of international sanctions.

For Pyongyang, the Singapore summit was another moment in a year of diplomacy in which Kim went from evil villain to smiling statesman.

Trump claimed that Kim asked to eliminate the entire sanctions regime in exchange for the closure of Yongbyon. Such an agreement would have gone against the longstanding American position of CVID as a precondition for ending economic pressure on North Korea. But North Korean Foreign Minister Ri Yong Ho subsequently contradicted Trump, saying that North Korea had asked only for the partial lifting of sanctions, following the usual step-by-step approach favored by Pyongyang.

Despite conflicting accounts, one point was clear: the leader-to-leader diplomatic approach had failed to bridge the gap between the U.S. and North Korea, prompting a new stalemate.

Perhaps the biggest ramifications for the breakdown of talks come in third-party nations. South Korea’s President Moon has been the broker for a U.S.-North Korea rapprochement. In 2018, Moon and Kim met three times, the second meeting called specifically to save what was, at the time, a faltering Singapore summit.

Moon is wagering a considerable chunk of political capital on mending ties with North Korea, and U.S. participation in this process keeps domestic opposition to inter-Korean cooperation in check. Moon’s popularity, at an all-time high in 2018, is now struggling amidst an economic slump. The disappointment of the Hanoi summit will have political repercussions for Moon at home as it will provide new impetus to the conservative opposition. For this reason, it is likely that Moon will soon resume his role of mediator between Kim and Trump.

China, meanwhile, was conspicuously quiet on the Hanoi summit, but this should not be misunderstood as a lack of interest. Beijing has a vested interest in both the stability of its eastern borders and its influence on the Korean peninsula.

North Korea has benefitted from Chinese support that has contributed to the country weathering a battery of economic sanctions. Chinese President Xi Jinping met Kim four times over the past year, most recently in January. China is unlikely to oppose plans for a denuclearized Korean peninsula, but will press for an accompanying reduction of U.S. troops in the region. Trump conspicuously thanked leader Xi for his support in a post-summit press conference; how genuine this praise was still remains to be seen.

What Comes Next: The Hard Road From Hanoi

The path to a nuclear-free Korean peninsula starts with concessions to denuclearization and a gradual lifting of economic sanctions. That now seems yet further away.

In proposing the dismantling of Yongbyon, North Korea has probably reached the end point of what it is prepared to offer in current negotiations. Without a more substantial sign that Pyongyang is ready to decommission its nuclear program, as we get closer to the 2020 U.S. presidential elections, Trump will be less willing to spend precious political capital on meeting with Kim.

The path to a nuclear-free Korean peninsula starts with concessions to denuclearization and a gradual lifting of economic sanctions.

While Hanoi might be seen as a disappointment, all is not lost. Despite initial U.S. opposition, a gradual approach still represents the best path forward, focusing on more realistic goals: a commitment to officially end the Korean War, limited but substantial steps in terms of North Korea’s denuclearization, and a gradual relaxation of economic sanctions.