China’s international agriculture investments represent more than a quest for food security. They are a bellwether of the economy and an indication of the competition and collaboration between state-owned and private enterprise, domestic and international actors, and even rival businesses. As protectionism and nationalism impinge more and more on global trade, Chinese direct investment in the food sector will become more agile and diversified, writes Thomas David DuBois, who conducted his research as a visiting fellow at the Fudan University Development Institute in Shanghai. 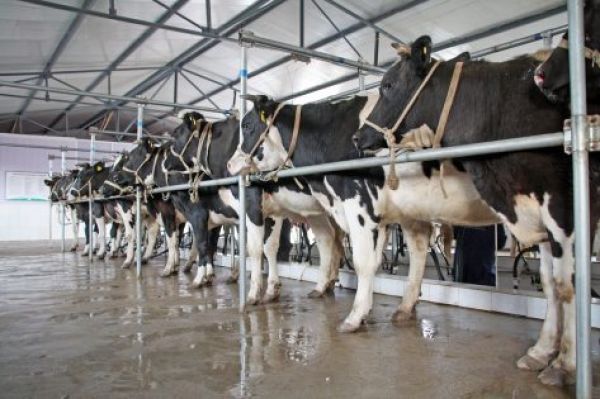 As of 2016, China’s foreign direct investment (FDI) in agriculture totaled US$26 billion, with investments in 100 countries. Although only a small part of China’s total outbound investment, purchases of food producers attract disproportionate attention for several reasons: their potential to shape global commodity prices, their tendency to focus on iconic (often national-linked) brands, and because many end-buyers are either Chinese state-owned enterprises (SOEs) or their subsidiaries.

The wave of outbound investment is unquestionably political in origin. China called for “agrarian globalization” (农业走出去 nongye zouchuqu) in 2007, launching its International Agrarian Cooperation Plan just as a domestic liquidity crisis was making it easier for companies to finance acquisitions overseas than at home. As a result, outbound investment in farming, forestry and fishing grew by 500 percent from 2010 to 2016. From an early focus on raw materials and crop production, especially within Asia, attention shifted to acquiring mature enterprises: Swiss seed and chemical giant Syngenta, trading companies Noble Agri in Hong Kong and Nidera of the Netherlands, leading American pork producer Smithfield Foods, Australia’s Manassen Foods, and British cereal maker Weetabix.

Political backing gives the impression that the wave of food FDI is a single, coordinated campaign. It is not. Stepping back from the rhetoric about China “starving the world”, it becomes clear that China’s food investments span a wide range of types, with aims ranging from Belt and Road Initiative-driven offshoring, political dealmaking, and commodity security to brand positioning, technology transfer, and the sharing of sector knowledge.

Until recently, the most salient features of these deals have been a tendency for Chinese buyers to overpay and their high rate of failure. In 2013, Henan-based Shuanghui International, now known as the WH Group, paid 30 percent over valuation for Smithfield, most likely as a premium to soothe nervous stakeholders. This deal has endured, but some others have unraveled. After failing to win Chinese consumers over to the taste of cold cereal for breakfast, Shanghai-based Bright Food (or Guangming) sold Weetabix to the US company Post Holdings in 2017.

While some failed investments are suspected of having been cover for money laundering, a close examination of such doomed investments as the agricultural park planned by the Chongqing municipal government in Laos since 2004 suggests a more straightforward reason: too much optimism and too little planning, what Economist Intelligence Unit (EIU) analysts politely described as a “failure to think through a vision for the acquired entity”.

A view from the dairy sector

China's investments in the dairy sector show the full range of its FDI motivations and strategies. Driven by the stunning growth of the domestic market, the largest dairy companies have poured huge sums into expanding production and processing capacity at home and abroad. Foreign purchases peaked in 2014 (see table) but deals continued even after the Chinese government began reining in credit for overseas M&A in 2016. Last year, Beijing Sanyuan Foods and Shanghai-based Fosun International spent €625 million (US$733 million) to purchase Brassica TopCo and PPN Management, controlling shareholders of French margarine maker St Hubert. Expected to launch in 2020, Feihe International’s C$225 million (US$173 million) infant formula plant in Kingston, Ontario, is expected to ship about 85 percent of its output to China. 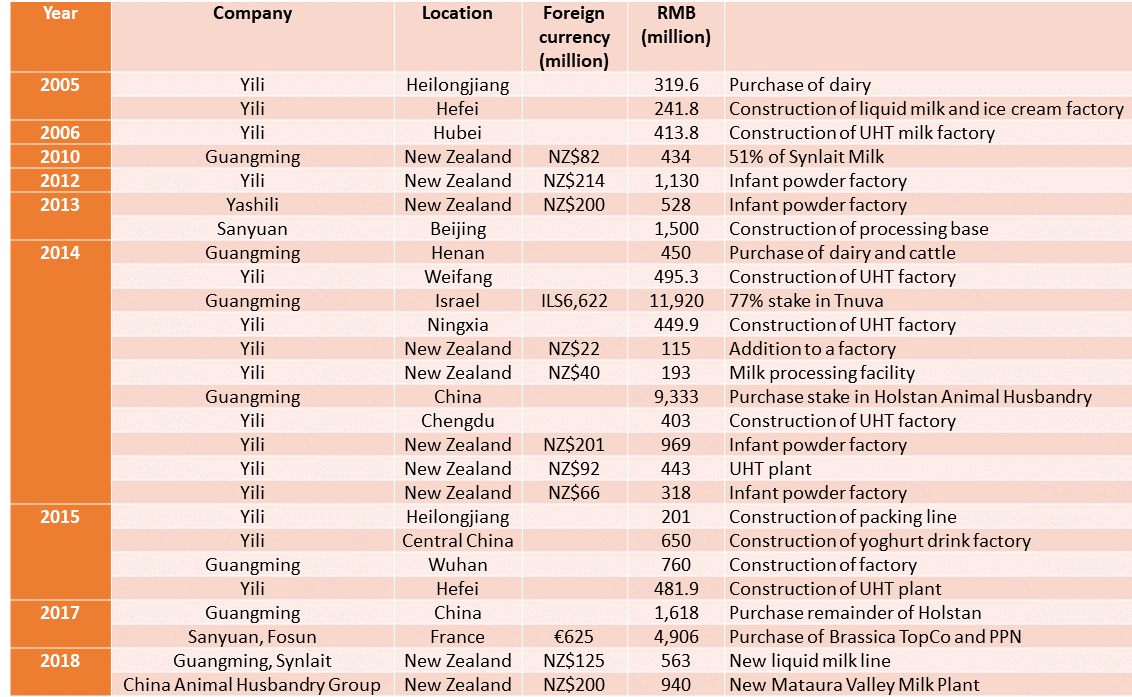 Why would China’s dairy producers look overseas? Cost is certainly a factor. Even with extensive government support for scaling up and investments in overseas factor production, such as Chinese-owned hay farms in the American northwest, the cost of producing milk in China remains far above that of many of its trade partners. There are also enduring concerns about food safety more than a decade after the 2008 milk poisoning scandal. Chinese consumers still prefer imported milk.

But even within this single sector, the devil is always in the details.

The classic case of a failed investment occurred in 2014 when Guangming bought a 56 percent stake – later raised to 77 percent – in the Israeli dairy cooperative Tnuva Food Industries. The deal was unpopular from the start. Echoing the opposition of local farmers, former chief of Israel’s national intelligence agency Mossad, Efraim Halevy, openly suggested that the purchase would give China dangerous access to Israel’s food production technology. Even supporters were hard pressed to explain the value of the acquisition.

The deal quickly proved to be a disaster. By 2016, it was clear that the company, valued by the merger at ILS8.6 billion (US$2.3 billion) was actually worth somewhere between ILS4.5 and 5.4 billion. Financing banks demanded improved collateral, and investors offered half price to repurchase Guangming’s shares. Losses were so dramatic that former executives from Guangming came under investigation for graft, prompting calls in both China and Israel for greater regulation of strategic FDI. Malfeasance aside, the real culprit appears to have been the absence of a strategic plan or proper diligence, what a Morgan Stanley report called a “a lack of clarity” about the deal’s aims.

Investments in places like New Zealand have been more successful. Having concluded early trade agreements with China, New Zealand quickly became the country’s main overseas dairy supplier. From about 10 percent of China’s dairy total imports in the early 1990s, New Zealand exports now account for over 60 percent of the Chinese import market.

New Zealand’s industry has prospered but not without a cost. With what one industry report called “near-irrational exuberance” pushing up the price of grazing land, producers shifted to using high-protein feeds or expanded grazing onto hillsides and other sub-optimal land. The resulting environmental degradation causes nutrient-rich effluvia to leach into rivers and stream systems. Activists call this “dirty dairying”, a term which producers chafe at.

Yet a problem caused by the Chinese market might also be solved by it. More and more consumers are willing to pay for high-quality milk. Rising demand for high-grade items such as infant formula is moving the industry as a whole away from intensification strategies to a focus on quality and value over sheer numbers. New Zealand has positioned its dairy exports to ride this market trend. Majority controlled by state-owned China Animal Husbandry Group (CAHG), the recently completed Mataura Valley Milk plant in the lower part of South Island of New Zealand is staking out a position at the high end of the market. Like the Feihe plant in Canada, this new generation of Chinese dairy investment pays a premium to local milk suppliers and wears proudly its ecological and high-tech bona fides.

As long as it is connected to state policy and state-owned enterprises, China’s overall FDI strategy will have to remain something of a mystery. At the same time, the state is only one of many actors, and its influence is in some ways becoming more and more difficult to discern, as the trend to consolidation and cross-investment blurs the divides between state-owned and private enterprise, between domestic and international actors, and even between competing businesses. As the US-China trade war continues to shape the world’s food trade, it is important to remember that even within a single sector, there is no single model of what drives Chinese investment.