In light of the fierce technology-fueled geopolitical battles being waged on the world stage today, it is time to examine how technology facilitated imperialism at the turn of the 20th century. Specifically, in Southeast Asia, the Dutch and the British used telegraphs, lighthouses, and more as instruments of empire. 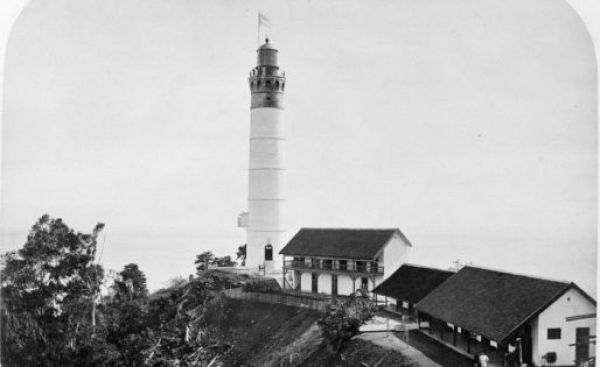 The lighthouse on Pulau Bras, 1877. Photo courtesy of Tropenmuseum.

Does technology help decide who rules the world? This question is on many minds at the moment, especially vis-à-vis China and the United States, two powers that are jockeying for leadership in Asia. Yet, technology-powered struggles for dominance are hardly new to this part of the world. The history of imperialism in maritime Asia has often been written about in brute political terms, yet it is clear that technology should also have a significant place in this conversation. Little would have been possible in advancing imperial agendas without the kinds of technological changes that made such aggression feasible.

This short article discusses some of these changes across Southeast Asia in the late 19th and early 20th centuries, through three technologies in particular. Throughout the piece I argue that such advancing maritime technologies were continually bent toward colonial control, and that they helped solidify the imperial presence in the region as Western societies increasingly began to dominate the planet.

The Consequences of Telegraphs and Canals

French missionaries and traders had been visiting Vietnam for centuries, but it was only after 1859 that French territorial control started to become a reality. Telegraphs helped to advance this process, as their reach stretched into the interior, following French explorers and soldiers, as well as along the coasts through submarine cables.

This utilization of the telegraph was enacted with imperial designs in mind. The first French lines were laid in 1862, shortly after Saigon, in the far south, had been taken, and by 1877, there were 1200 miles of them, including 47 submarine cables along the coasts. The wires were used to report on troop movements, but they also facilitated the flow of information from the shrinking frontier to the “center,” both in Saigon and, eventually, to Paris.

Likewise, the idea of a canal across the Isthmus of Kra, in southern Thailand, had been pursued since the 17th century. This was the narrowest point on the Malay Peninsula, and a canal built here would shorten shipping distances and save money on transport costs. The British, and eventually the Germans, took a keen interest in this project during the second half of the 19th century. The royal court and elites of what was then Siam did too, though the king ultimately decided not to grant permission to build because of concerns regarding sovereignty. Here, the non-presence of a technology became almost as important as its would-be presence. The idea of the canal would haunt local and trans-regional geopolitics for years to come, up to and including the present, as it remains a potential project.

The history of lighthouses in Maritime Southeast Asia also offers some important lessons about the nature of evolving imperial control. Lighthouses, like other technologies of colonial governance, sprang up in increasing numbers as state concerns over maritime safety and navigational movement grew. The lights were first positioned in places of the greatest importance to these regimes: outside major harbors, on busy shipping routes, and near points of danger, like wrecks or submerged reefs. They gradually came to dot much of the region's seascape, as Dutch Batavia and British Singapore increasingly lit their shared archipelago for the burgeoning traffic. By the early 20th century, the busiest local harbors were illuminated by these administrations, as were many of the most distant maritime frontiers of this enormous island world. Far-flung geographies and difficult terrain could still thwart the European colonial advance at that time, though this state of affairs would not last long.

The construction of imperial lighthouses was very often a contested phenomenon. Different actors had different interests in this arena, and these programs only sometimes converged when it came to lighting. The fragmented nature of British authority in the region, for example, made it difficult to coordinate lighting policy. The Straits Settlements, British North Borneo, and Sarawak—all ruled by the British, but through different channels, and in different ways—rarely agreed on who was responsible for lights, and who would pay their costs. Metropolitan policies from London and The Hague also often ran counter to local colonial interests, when it came to lighting the coasts.

Southeast Asians understood that the grafting of these technologies onto local seascapes had significant power implications.

International diplomacy was contentious as well, both between the British and the Dutch, and between these European regimes and local elites. Southeast Asians understood that the grafting of these technologies onto local seascapes had significant power implications. The Sultan of Johor, for example, used his leverage to obtain revenue from Singapore in exchange for his permission to station a British lighthouse on his soil. On the other hand, across the Straits in North Sumatra, the Acehnese lost their sultanate to the Dutch, and this was partially achieved through the navigational support that Batavia's massive lighthouse on Pulau Bras provided to the colonial forces. In these cases, the imposition of lights as crucial “tools of empire” helped signal the maintenance of indigenous authority or its demise. The very physical presence of lighthouses went part of the way to indicating who would be able to continue ruling in the new power hierarchies of “high colonialism,” albeit as second-rung vassals, and who would relinquish authority to increasingly aggressive imperial regimes.

After roughly 300 years of contact, the reach of Dutch and British statecraft in Southeast Asia was longer than it had ever been in the region. This was truer in the maritime realm than in many other fields of imperial interest, and the expansion of lighthouses was a contributing factor. These devices not only allowed trade and shipping to be afforded relatively safer navigational passage along the frontier; they also allowed commerce and movement to be channeled into discernable, regulated avenues for the state. Shipping that sailed outside prescribed pathways could be nudged toward sanctioned routes. The state was able to dictate the flow and direction of mercantile activity as never before.

Equipped with new lighting technologies—such as more advanced construction techniques, more powerful lenses, and brighter, more efficient power sources—Batavia and Singapore were able to illuminate increasingly wide swaths of Maritime Southeast Asia. This did not mean that all spaces of imperial navigational "blindness" disappeared at once. But by the early 20th century, unlike 50 years previously, many of Southeast Asia’s 17,000 islands were charted and lit by the optical tools of these two colonial states. Technology, in this case, went hand in hand with hegemony.

We will likely see similar landscapes of technology and control being built in coming years.

The scores of lighthouses that stretched to the ends of the Indies’ horizons meant greater navigational security for many. But they also represented the architecture of an increasingly coercive world. We will likely see similar landscapes of technology and control being built in coming years, as great powers such as China and the U.S. re-enact colonial-era struggles in the South China Sea and elsewhere. This will be nothing new for Asia, a region that has already been shaped by such contests for centuries.

Eric Tagliacozzo is a professor of history at Cornell University, where he also directs the Comparative Muslim Societies Program and the Cornell Modern Indonesia Project. He is the author of books on the history of smuggling in colonial Southeast Asia (Yale, 2005) and on the Southeast Asian Hajj (Oxford, 2013). He is also the editor or co-editor of 10 other books.