Australia faces a range of complex geopolitical and security challenges, which include managing its close strategic and economic ties with the United States and its important trading relationship with China. The unexpected election victory of Prime Minister Scott Morrison’s center-right Coalition government means that Canberra is likely to maintain its current foreign and defense policies, writes John Blaxland of Australian National University (ANU). 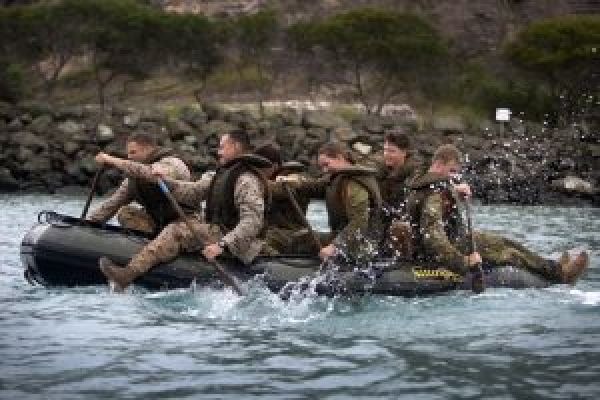 US marines and Australian sailors participate in a multinational naval training exercise in New Caledonia in the South Pacific in 2018 (Credit: US Marine Corps, photo by Cpl Mason Roy)

Foreign policy barely rated a mention during Australia’s election campaign. Prime Minister Scott Morrison, whose center-right Coalition government was returned to office on May 18, had largely endorsed the broadly pro-United States policies of his predecessors. Now the expectation is that, while some faces may change in the ministerial line-up, there will be more continuity than change in the policy and governance arrangements for Australia’s national security and defense architecture over the coming years.

The government’s 2016 defense white paper predated the election of Donald Trump and placed equal emphasis on securing Australia and its interests locally, regionally and globally. Defense expenditure was set to rise to 2% of GDP. Australia is on track to reach, if not exceed, that target in the near future. But the equal balance among the three priorities was already shifting towards a closer focus on regional rather than global priorities, notably in the Pacific and Southeast Asia. The imperatives for that realignment appear to be growing stronger, with the new Morrison government therefore likely to follow them.

Australia’s 2017 foreign policy white paper laid out what is best called Australia’s ‘Plan B’. This involves maintaining alliance ties with the US, as has long been the case, while working hard to diversify the country’s security ties. This means significantly stepping up cultivation of regional bilateral and multilateral relations. The government views diversification as a form of hedging in case the US seeks to disengage from Australia’s region or takes action considered inimical to Australia’s interests. Plan B entails beefing up regional ties with Japan and India, as well as immediate neighbors, notably Indonesia, Singapore and Vietnam, and others.

Now in its third run, the Indo-Pacific Endeavour – the 11-week deployment of four Royal Australian Navy (RAN) vessels on a tour of India, Indonesia, Malaysia, Singapore, Sri Lanka, Thailand, and this year for the first time, Vietnam – is the most visible manifestation of this strategy, which will continue to mature and grow in the coming years. This exercise, centered on the RAN’s new amphibious ships, but with army and air force elements attached,  is an attempt at constructive engagement on security-related and humanitarian assistance-related activities with regional counterparts.

In pursuing its relationships in the Pacific, Australia has long considered it crucial to coordinate policies with New Zealand. This is now even more vital in light of Australia’s so-called Pacific Reset – a multi-billion-dollar strategy aimed at South Pacific nations that is focused on diplomacy, infrastructure, private-sector investment and labor mobility. Some critics have argued that this is obviously about containing China, an objective reflected in decisions such as Canberra’s veto of Chinese telecommunications group Huawei’s plan to construct a telecommunications link between Australia and the Solomon Islands. While the Pacific nations face numerous challenges for which the Pacific Reset can help, much more is required to address genuine governance and environmental concerns.

At the same time, the Australian government has doubled down on its ties with Washington, notably at the working level across a range of domains that include logistics, communications, intelligence, and operational interoperability. While policymakers are undoubtedly wary of Trumpian Twitter tirades, the ties that bind Australia to the United States have broadened and deepened in the years since the 9/11 terrorist attacks of 2001 and look set to remain that way and possibly deepen further. As Australia invests in its defense industry, building ships, military vehicles, and other combat related systems, efforts to capitalize on the level of integration with US supply chains should grow.

Meanwhile, trade and economic ties with China already look set to be strained, with the Chinese English-language newspaper Global Times declaring soon after Morrison’s victory that the relationship was rocky in large part because of the Australian government’s rejection of the use of Huawei’s 5G communications technology. Canberra appears likely to maintain its firm line on Huawei, while emphasizing other aspects of the relationship.

In the meantime, the escalating US-China trade war will make it more and more challenging for Australia to manage constructively the tension between its competing security ties with Washington and its trade ties with Beijing. Although China is Australia’s largest export market and source of imported goods, the US remains its biggest foreign investor and services trading partner. The relationship with China will continue to be brittle as a growing range of security, human rights and governance issues could prove to be obstructions. Working effectively with neighbors will be critical to ameliorate the effects of any tensions.

With a clear electoral mandate and a full term ahead, and if retained as foreign minister, Senator Marise Payne would have the opportunity to engage constructively in reshaping Australia’s key international relationships to fulfill the goals of the 2017 white paper. One focus will need to be Indonesia, relations with which require deft but respectful management. Long wary of Australia over its handling of live cattle exports, people-smuggling, espionage, death penalties for Australian citizens convicted of major crimes, and wrangling over Jakarta’s policies in Timor-Leste and its restive Papua and West Papua provinces, Indonesia would seem to gain little domestic political capital from closer engagement with Australia. Yet both sides recognize the need to coordinate their counter-terrorism endeavors, and there are other areas in which security cooperation can generate mutual benefits. With Joko Widodo re-elected as Indonesian president, both Canberra and Jakarta will be in a position to proceed with ratifying the recently signed Indonesia-Australia Comprehensive Economic Partnership Agreement (IA-CEPA). That augurs well for closer and more dynamic ties between the two countries.

Morrison entered the election campaign with Marise Payne as foreign minister and Linda Reynolds as the designated defense minister, succeeding the outgoing Christopher Pyne, who had played a prominent role in re-energizing the Australian defense industrial base. Under Pyne, a contract for 12 French-designed but Australian-built submarines was signed, as well as one for a dozen frigates equipped with Aegis advanced combat systems and several other major industrial investment programs. These projects will take decades to complete.

A former military officer from Western Australia with connections to the US and other defense industries, Reynolds can be expected to maintain the emphasis on Australian builds with integration of American systems where possible. She looks set to be supported as defense industry minister by South Australian Senator David Fawcett, who would likely reinforce the choices made under Pyne.

While Payne and Reynolds appear the likely appointees, they may yet have to contend with another important political actor: Peter Dutton, the high-profile and controversial home affairs minister in charge of law enforcement, immigration and the security agencies. Dutton, who was re-elected despite facing a significant political challenge, could have aspirations for another prominent ministry. It would not be surprising if, building on his success in amalgamating the agencies in the home affairs portfolio, Dutton is given his choice of defense or foreign affairs and trade, instead of Payne or Reynolds.

The longstanding challenge of refugees controversially detained on Manus, in Papua New Guinea, and the Pacific Island republic of Nauru, will probably fade as the remaining numbers dwindle (there have been no people detained in the Nauru processing center since the end of March), but other security challenges in the Pacific will generate a range of additional concerns. Indeed, not discussed in any depth during the election campaign were the security challenge in Australia's South Pacific neighborhood relating to great power competition, environmental concerns and a crisis in governance.

The combination of these three factors underscores that security and defense are playing an increasingly prominent role in Australia’s approach to all of its international engagements. The Morrison victory points to policy continuity and some change: cementing US ties; further investment in the Pacific, Southeast Asia, Japan and India; and an attempt to assuage China without conceding on 5G. That would make for a crowded defense, security and foreign policy agenda in the coming years.

John Blaxland is Professor of International Security and Intelligence Studies and head of the Strategic and Defence Studies Centre at Australian National University in Canberra. A historian, he is a former Australian Army officer.