China’s growing appetite for seafood has led to fundamental changes in the global fishing industry, with ramifications for regional security. With every step it takes in fishing policy, the Chinese government must balance its need for food security with environmental and diplomatic concerns. 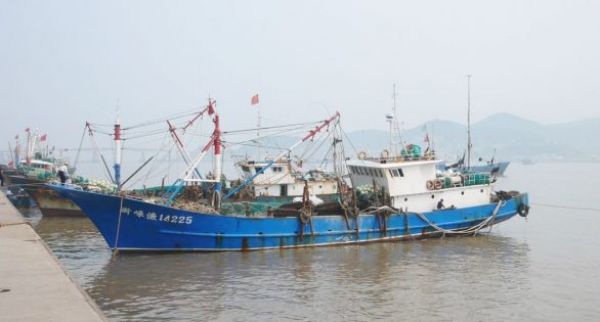 Today, each person eats, on average, about twice as much fish as 50 years ago. But according to the Food and Agriculture Organization of the United Nations, more than 60% of fish stocks are “fully exploited”—meaning that there is no expected room for further expansion. This has contributed to a 39% decrease in recorded marine species over the past 40 years.

The sustainability of fish stocks has drawn increasing concern in recent years, perhaps more so in China than in many other countries, with its expanding middle class demanding nutritional animal protein. This growing consumption, in addition to China’s shifting trade positions, has far-reaching consequences, not just on the global fishing industry, but also on security and peace in regional waters.

In the past few years, maritime incidents involving Chinese fishermen have sparked diplomatic and security tensions between China and its neighbors. Japan’s arrest of the captain of a Chinese fishing vessel involved in a collision in disputed waters near the Senkaku/Diaoyu Islands in 2010 triggered a major diplomatic dispute between China and Japan. Further south, the Philippine Navy’s confrontation of eight Chinese fishing vessels in the disputed Scarborough Shoal in 2012 resulted in a months-long standoff between Philippine and Chinese ships.

These and similar incidents have led many in the media and academia to claim that Chinese fishermen are actually members of a government-appointed fishing militia. However, it is counterproductive to think of fishermen as passive agents under the full control of Chinese authorities. More importantly, such thinking fails to situate the fishing disputes within the context of the development of regional fishing industries, particularly that of China.

Although China’s official marine catch data are notoriously unreliable, the official statistics are nevertheless good indicators of the government’s policy priorities during different periods. As can be seen in the figure below, China’s fishing industry has gone through four different periods since 1978. During each period, different policy measures were implemented.

Source: Bureau of Fisheries of the Ministry of Agriculture, China, 2017.

The Ebb and Flow of China’s Fishing Policies

From 1979 to the late 1990s, the central government raced to meet the increasing demand for seafood and to grow the domestic fishing industry. By the end of this period, overfishing, land reclamation, and industrial pollution had severely depleted stocks in China’s traditional fishing grounds. This resulted in the central government’s shifting policy objectives toward fish stock restoration and sustainable fishing. To this end, China introduced, among other policies, a zero/negative growth policy to prevent further overfishing.

Between 2011 and 2015, the central government again shifted its policy focus. Rather than imposing controls, it now encouraged the fishing industry to expand. There were several key drivers behind this. For starters, with income growth, Chinese consumers have increasingly been moving from grain-based diets to nutrition-oriented food consumption. As a source of high-quality animal protein, fish products have factored hugely in this transition.

Next, while the central government was concerned with food security, local governments were more interested in the role of the fishing industry in boosting GDP. In many of China’s coastal areas, fishing and its associated industries were, and continue to be, pillars of the local economy. Keen to spur economic growth, employment, and external trade, local governments eagerly supported the expansion of the fishing industry. They had not been as enthusiastic in implementing the control measures of the earlier period.

By the end of the 1990s, overfishing, land reclamation, and industrial pollution had severely depleted stocks in China’s traditional fishing grounds.

Moreover, the central government began to emphasize the strategic, political importance of the industry. In 2012, China incorporated the development of the fishing industry into its broad maritime power strategy. And in the face of rising tensions in the South and East China Seas, the government has highlighted fishermen’s role in defending the country’s maritime interests. The fishing industry also plays a big part in the Belt and Road Initiative, as strengthening cross-country cooperation in fishing has become an important component of the project.

The second expansion period ended quickly, as the central government felt the resulting environmental, social, and political damage. A 2016 ruling by a tribunal in The Hague, for instance, criticized Chinese fishermen for causing severe harm to coral reefs and endangered species in the South China Sea. Thus, since the second half of 2016, highlighting the importance of sustainable development, the central government has been making efforts to reassert controls on China’s fishing industry.

Firstly, China has introduced plans to cut its fishing fleet and total catch over the next five years. It aims to reduce its annual marine catch to less than 10 million tonnes, from the current 13 million tonnes, by 2020. Concurrently, China looks to cut its notorious fuel subsidies for fisheries: by 2019, they will be reduced to 40% of their levels in 2014.

Secondly, tougher penalties have been set for illegal fishing, the poaching of endangered species, and marine pollution. In August 2016, the Supreme People's Court declared that Chinese citizens or foreigners caught fishing illegally in China’s waters will be pursued for criminal liability. In the same month, China’s legislature reviewed a draft amendment to the Marine Environment Protection Law that sought to impose more severe penalties for marine pollution.

Thirdly, policies have been introduced to tackle problems associated with aquaculture, the farming of fish, shellfish, and aquatic plants. Owing to growing concerns over the sustainability and safety of the aquaculture sector, China has made expanding mariculture, the cultivation of seafood products in their natural environment, a priority in its 13th Five-Year Plan.

Lastly, another key policy shift, often overlooked, is that China has seemingly ditched the idea of self-sufficiency in fish supplies. This corresponds with a paradigm shift in the country’s overall food security strategy.

To meet the rising demand for seafood while making efforts to reduce the domestic marine catch, the Chinese government has relaxed controls on fish imports. In 2017, China launched two rounds of cuts of its seafood import tariffs, and it is reported that the country will slash import tariffs on more than 200 seafood products in July 2018. China has been the world’s largest exporter of seafood since 2002; at this rate, it could soon become the largest importer of seafood as well. Indeed, on a global scale, China’s growing demand for seafood appears to be pushing up prices of products such as salmon and tuna.

The effectiveness of these efforts remains to be seen. Firstly, the extent to which local governments, which are more concerned about local economic growth and employment, will comply with central government policies is an open question. Secondly, developing mariculture countrywide will be a difficult undertaking. As long as China’s consumption of fish products continues to increase, pressure will be exerted on domestic and international fish stocks, potentially leading to more clashes between China and its neighbors.

This article is derived from a presentation at the symposium "China and the Sea: Maritime Economy and the Challenge of Sea and Ocean Sustainability," co-organized by the French Centre for Research on Contemporary China (CEFC), the Swire Institute of Marine Science (SWIMS) of The University of Hong Kong, and the consulate general of France in Hong Kong and Macao.

Hongzhou Zhang is a research fellow with the China Programme at the S. Rajaratnam School of International Studies, Nanyang Technological University, Singapore. His main research interests include China and regional resources security (food, water, and energy), China’s fishing policies, and maritime security. He is an author/editor of three books, including “Securing the ‘Rice Bowl’: China and Global Food Security” (Palgrave, 2018).