A Possibility of Rebirth for Dongjiang River

The Dongjiang River, which supplies fresh water to almost 40 million people, is being threatened by pollution. But as new technology parks increasingly replace pig farms and other decaying industries, there could be an opportunity to invent more sustainable solutions—for Guangdong province, Hong Kong, and the world. 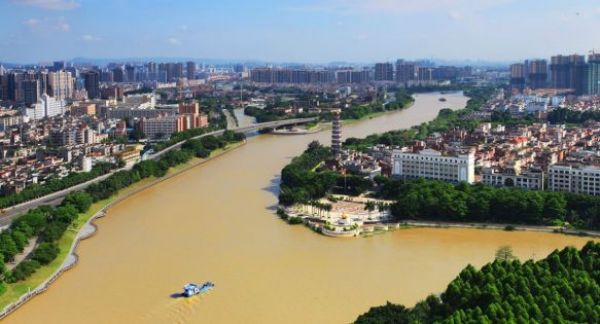 Contaminants both obvious and subtle have made a home within our rivers. These pollutants include pesticides, fertilizers, industrial effluent, and human sewage—a mélange of chemicals and biological waste. The Dongjiang and the Xinfengjiang, which merge in Heyuan, Guangdong, about 200 kilometers northeast of Guangzhou, are becoming prime examples of this.

Action must be taken before their situation becomes as dire as that of the Ganges in India, the Marilao in the Philippines, or the Mississippi in the United States.

The Dongjiang and the Xinfengjiang supply water to nearly 40 million people living in six cities: Heyuan, Huizhou, Dongguan, Guangzhou, and Shenzhen in Guangdong province, and Hong Kong. The five Guangdong cities are home to about 50% of the province’s population, and generate about 70% of Guangdong’s total gross domestic product. In an indication of how important these rivers are to this populous area, Hong Kong buys about 80% of its fresh water from the Dongjiang.

The Dongjiang and the Xinfengjiang supply water to nearly 40 million people living in six cities.

Contaminants are not the only things contributing to the rivers’ deterioration. There are 702 hydroelectric power stations along the Dongjiang and its tributaries. The biggest one is the Xinfengjiang Hydroelectric Power Station, located at the base of the eponymous dam. Dams are widely recognized to have negative effects on their surrounding environment. One of the most obvious of these effects is the accumulation of water hyacinths. This invasive plant from Latin America afflicts waterways across the world, choking aquatic life and blocking transportation. Their proliferation leads to reduced flow in rivers, making it much more difficult to flush away pollutants.

Actions with No Bite

As they have been promoting themselves as a scenic area to attract tourists, emphasizing the ethnic Hakka inhabitants, the local governments of the region have undertaken some measures to protect the rivers.

A report published on the Environmental Protection Department of Guangdong province website in 2013 stated that Heyuan had collected 57 tons of water hyacinths from the Dongjiang and the Xinfengjiang. However, river cleaners in Heyuan complained about the futility of their efforts. They said they were understaffed, that water hyacinths grew too fast, and people littered too much.

The report mentioned that the government had closed 2218 pig farms, 38 waterside restaurants, and 170 illegal mines along the rivers. In addition, it had set up 118 garbage transfer stations, 13,000 village garbage stations, and 27 wastewater treatment plants. As a result, the report concluded, water quality in the six tributaries of the Dongjiang had improved greatly.

In 2016, the government of Heyuan issued "Ten Water Policies," hoping to tackle all of its water pollution problems at once. Polluting businesses such as pesticides manufacturers, paper mills, and pharmaceutical raw materials manufacturers were no longer allowed along the two rivers, and requirements were put in place for Industrial wastewater treatment. But few local people I’ve interviewed knew about the water policies. Some expressed doubt about their effectiveness—they could easily be just another 10 of the many ambitious policies that have gone no further than announcements in the local newspapers.

Among the most affected by the pollution and the policies that target it are the boat people living along the Dongjiang, like Guozhu Gao, a 73-year-old fisherman I met in 2017. As he told me, “I’ve lived my whole life on the water: born on the water, grew up on it, eat from it, and sleep on it.” Mr. Gao expressed amazement at the changes to the city—its growing population and the amount of rubbish and sewage said population produced, much of which ended up in the two rivers.

The government of Heyuan has been trying to move the boat people off the rivers since 2010, as part of its efforts to make Heyuan “a state-level hygiene city.” In May 2010, 59 boat families moved off the river. Since then, more boat people have been relocated ashore. Now there are about 30 boat families left in Heyuan, all confined to one district.

The Heyuan water supply draw-off point sits less than 100 meters from one of the city’s sewage outflow pipes.

The government regards boat people as a source of pollution. The thinking goes that their very act of living on the water pollutes it, and their boats ruin the view of the rivers. Mr. Gao strongly disagreed with this. To him, the dams, pig farms, rubbish, sewage, medical waste, and industrial effluent were the real evils.

Much of the waste from nearby pig farms and sewage from villages along the rivers ends up in the Xingengjiang. The Heyuan water supply draw-off point sits less than 100 meters from one of the city’s sewage outflow pipes, from which inky liquid runs continuously into the river. The government has decreed that all unauthorized pig farms should be closed, but that is no guarantee that they will be. Residents have said that the area’s illegal clay factories, though officially closed, continue to operate at night. Shutting down these businesses is proving to be a challenge, as they support the livelihoods of many.

A Chance for a More Sustainable Model

But a much larger challenge—as well as an opportunity—lies 15 kilometers south of downtown Heyuan. There sits a 350,000-square-meter industrial park called Gaoxin Technology Development Zone, next to the Dongjiang. Since 2003, more factories have moved from the Pearl River Delta to Heyuan. Now, Gaoxin counts among its tenants ZTE, a giant in telecommunications equipment and systems, and Hanergy, a renewable energy company active in solar power, wind power, and hydropower generation. In June 2018, in the context of the Greater Bay Area (the designation for a Guangdong-Hong Kong-Macau integrated zone), another 10 projects, including an Alibaba data center, began construction in Heyuan. The city’s government is hoping its rapidly growing tech sector will generate RMB 300 billion annually by 2025.

Will all this come at the cost of the environment? Most of these new projects deal with electronic information, renewable energy, and precision manufacturing, which could be less polluting than traditional industries, if installed and run innovatively. Many of these companies claim to be environmentally friendly, while the government has reemphasized water policies. However, black water can still be seen flowing into the Dongjiang from Gaoxin’s sewage pipes.

The capacity of the government to set up an enforceable framework and the ability of these companies to use water innovatively and sustainably are the deciding factors of the Dongjiang’s future. It is already late, but as investment continues to pour into the area, an opportunity to reinvent the way industry uses water is emerging.

Xiaomei Chen is a bilingual writer and photographer based in Hong Kong.