The United States has affirmed strategic competition with both Russia and China as the central organizing principle of its national security policy. The announcement on October 20 by President Donald Trump that the U.S. would withdraw from the 30-year-old Intermediate-Range Nuclear Forces Treaty because of alleged Russian violations might be a key plank of that policy. 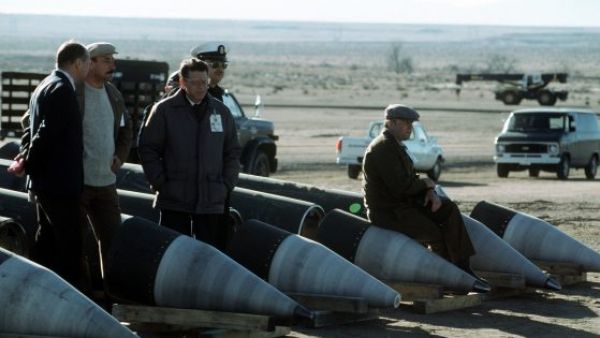 Soviet inspectors and their American escorts stand among missiles dismantled in accordance with the I.N.F., 1989.

The Intermediate-Range Nuclear Forces Treaty (I.N.F.) took seven years to negotiate, contributed to the end of the Cold War, and ushered in three decades of strategic stability. It prohibited the development, testing, and possession of ground-launched cruise and ballistic missiles with a range from 500km to 5500km, irrespective of whether they were armed with nuclear or conventional warheads. It entered into force on June 1, 1988. By the implementation deadline of June 1, 1991, 859 U.S. and 1752 Soviet short-, medium-, and intermediate-range missiles had been destroyed.

The I.N.F. was the first disarmament agreement of the nuclear age that reversed confrontation, reconstructed cooperation in preserving nuclear peace, and enhanced global perceptions of the superpowers as responsible managers of the global nuclear order. In their joint statement at the conclusion of the bilateral summit that resulted in the signing of the I.N.F., U.S. President Ronald Reagan and Soviet Union General Secretary Mikhail Gorbachev affirmed “their solemn conviction that a nuclear war cannot be won and must never be fought.”

The U.S. first charged Russia with I.N.F. non-compliance in July 2014 and has repeated the allegation every year since then. Russia has been accused of clandestinely deploying a nuclear-capable 2000km-range ground-launched missile. Such a missile would give Russia a potent means to threaten N.A.T.O. transport nodes and fixed equipment. Some fear that Russia’s goal is to intimidate the Baltic states into submission. Were Russia to invade them, the missile would stop France, Germany, and the United Kingdom from coming to their assistance.

What was advantageous with regard to Russia in Europe was placing the U.S. at a growing and potentially critical disadvantage with regard to China in the Asia-Pacific.

Europeans remain divided on the U.S. intelligence on alleged Russian breaches of I.N.F. obligations, especially as Washington refuses to divulge all its information, citing a need to protect sources and methods. Critics note that hawkish Americans believe nuclear rearmament would be good for U.S. security and the defense industry. Thus, the American Enterprise Institute, a leading neo-conservative think tank, has called for government efforts to generate political and public support for rearmament with cruise missiles.

To the Trump administration, the I.N.F. engendered a situation in which U.S. strategic imperatives collided. What was advantageous with regard to Russia in Europe was placing the U.S. at a growing and potentially critical disadvantage with regard to China in the Asia-Pacific.

Within the European Theater

Despite alleging Russian violations, President Barack Obama did not exit the I.N.F. because he did not wish to fuel a new nuclear arms race and also because he listened to European objections to U.S. withdrawal. The Trump administration is deeply skeptical of multilateralism in general and multilateral nuclear arms control in particular. It has scarcely bothered to conceal its disregard for European allies on security policy.

Attempts to place U.S. missiles on European soil would convulse European politics and society. In the 1980s, responding to the deployment of SS-20 missiles by the Soviet Union, N.A.T.O. stationed 572 Pershing II and ground-launched cruise missiles in Belgium, Germany, Italy, the Netherlands, and the U.K. But, adopting a “dual-track strategy,” it offered to scrap the entire class of missiles if Moscow did the same. This “double zero” strategy worked, and the I.N.F. helped to protect the European continent and stabilize the entire global geopolitical order.

[The Trump administration] has scarcely bothered to conceal its disregard for European allies on security policy.

Russia has more to gain and N.A.T.O. more to lose from the collapse of the I.N.F. While Russia will be able to move ahead rapidly with the development and deployment of short- and medium-range ground-launched nuclear-capable missiles, the U.S. will face difficulty in finding allies prepared to station such missiles on their territory. Would the host countries have a voice or veto on launching them and in choosing targets?

Germany’s Foreign Minister Heiko Maas urged Washington to consider the consequences of withdrawal for Europe and for the future of nuclear disarmament. E.U. foreign policy chief Federica Mogherini said, “The I.N.F. contributed to the end of the Cold War and constitutes a pillar of European security architecture.” But some Baltic countries insist that Russia’s violations of the I.N.F. demand robust diplomatic and military counter-measures. And the U.K. has lined up firmly behind Washington.

In other words, Russia violates the treaty, the U.S. gets the blame for its collapse, and Russia is free to race ahead with deploying the weapons openly. Withdrawal from the I.N.F. feeds into perceptions of the U.S. as a major belligerent power. Reinforcing these perceptions, Russia alleges that the withdrawal from the I.N.F. is part of a U.S. drive toward nuclear supremacy and “unilateral military superiority.”

The U.S. exit from the I.N.F. is in part a response to China’s growing challenge to U.S. dominance in the Asia-Pacific. John Bolton, writing in the Wall Street Journal as a private citizen in 2011, conceded that the I.N.F. had successfully “addressed a significant threat to U.S. interests.” Since the end of the Cold War, however, China and North Korea have been developing missile-delivery capabilities. “To reduce the threat from I.N.F.-range missiles,” Bolton concluded, “we must either expand the I.N.F. Treaty's membership or abrogate it entirely so that we can rebuild our own deterrent capabilities.” Now he is Trump’s national security adviser and in a position to implement his own earlier advice.

Does it make sense to shred [the I.N.F.] in order to counter non-nuclear threats from China?

China is not a party to the I.N.F. and thus unconstrained by its limits. About 95% of its missiles are in the 500km-5500km range prohibited by the I.N.F. This enables China to target U.S. ships and bases from the mainland by relatively inexpensive conventional means. In testimony to the U.S. Senate Armed Services Committee on April 27, 2017, U.S. Pacific Commander (and now ambassador to South Korea) Admiral Harry Harris noted that the I.N.F. limited “our ability to counter Chinese and other countries’ cruise missiles, land-based missiles.”

Without I.N.F. restrictions, the U.S. could develop and station ground-launched intermediate-range cruise missiles in Guam, Japan, South Korea, and northern Australia. That said, U.S. allies in the Pacific would be as conflicted as N.A.T.O. allies if asked to host American missiles on their soil. The I.N.F. was negotiated to counter the nuclear threat to Europe. Does it make sense to shred it in order to counter non-nuclear threats from China? Besides, it strains credulity to put China, with 280 bombs, in the same league as the U.S., with 6450, including around 1000 held in a state of high alert.

With the I.N.F. dead and the New Start arms reduction treaty between the U.S. and Russia set to expire in 2021, the world will be left, for the first time since 1972, without any limits on the two major nuclear arsenals. The nuclear arms control architecture began fraying when President George W. Bush pulled out of the Anti-Ballistic Missile Treaty in 2001. Abrogating the I.N.F. could signal the start of a new nuclear arms race.