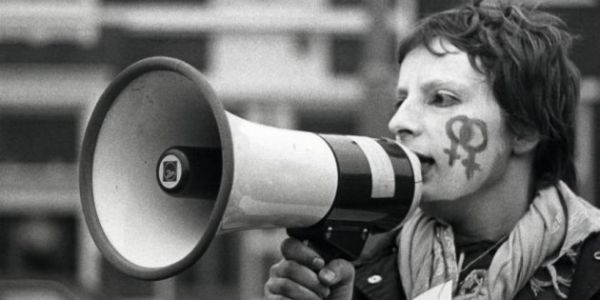 What do we imagine when we refer to “the global” or “globalization”? As many scholars have pointed out, the Anglo-European experience has often been considered the template for modernization, and the West the center of globalization, but how true is that? My research joins that of a handful of scholars who aim to “provincialize Europe,” or show how Asia has not been isolated, but long a part of global circuits. Below, I explore via a North American context one of the many largely unwritten histories of “Asia the global”: how Western second-wave feminism was powerfully influenced by China’s experiences, a contribution that has gone unrecognized even in China.

China as an Engine of Global Social Revolution

During the 1960s, China became a key actor in promoting social revolution around the world. Although people-to-people exchanges in North America were rare, Chinese authorities devoted precious resources to promoting China as a revolutionary utopia, printing millions of books and pamphlets, translated into over a dozen languages.

China’s Cultural Revolution, with its college student Red Guards and its anti-bureaucratic and anti-hierarchical mandate, resonated with and motivated North Americans' own sense of revolution, feminist and otherwise. As social movements ramped up, anti-war and civil rights movements drew on China to imagine a better future. China itself was a strong leader in the anti-Vietnam War movement, and even produced political posters promoting global solidarity. 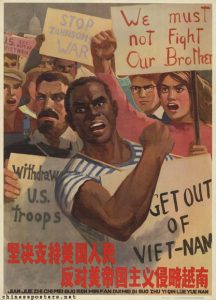 There is clear, material evidence of China's influence on Western second-wave feminism. Chinese revolutionary woodblock prints adorned flyers at North American rallies. Chinese photographs were reproduced in motivational pamphlets. Depictions of women riding tractors, working in factories, and using microscopes as trained scientists had a deep impact in North America as women became increasingly angry about their limited career opportunities. Indeed, nascent socialist feminist groups like Redstockings seized on these images for their own promotional materials.

Before the 1960s, North American discussions of socialism largely referred to the Soviet Union. However, after the spread of news of Stalin’s purges and the Soviet invasions of Hungary and Czechoslovakia, many socialists outside of the U.S.S.R. were disturbed, and China emerged as a compelling socialist alternative. By the late 1960s, the key references for socialist feminist groups were almost always Chinese and not Soviet.

China provided a powerful image of feminist revolution, as observers contrasted the radical social change it had gone through with its recent past. Many saw “the traditional Chinese woman” as among the most oppressed in the world, with bound feet, sent as a stranger to her husband’s village to serve him and his family. Conversely, the People’s Republic of China, in its first official act, passed the New Marriage Law in 1950. This outlawed forced marriage and concubinage, and gave women equal rights over the ownership and management of family property. It also allowed women to initiate divorce at a time when this was inconceivable in most parts of the world. For a while, before those in the West learned otherwise, China was sometimes seen as the first feminist state.

Not only did China present a model for divorce, but it also provided legal and technical examples of abortion. In Canada, only through feminist activism did a 1969 law decriminalize both contraceptives and certain special-case abortions. Yet, it was difficult work to develop safe and effective abortion methods, and doctors learned from a Chinese drawing of a new technique. These methods were tried out in women’s free health clinics, created as alternatives to hospitals, which were described as institutions of capitalist, patriarchal control.

For a while, before those in the West learned otherwise, China was sometimes seen as the first feminist state.

China also brought the language of emancipation (previously reserved for the end of slavery) and liberation (previously used only to describe the military defeat of an oppressive power) to women’s fight for equality. Terms used by Chinese revolutionaries later became keywords in North American feminist movements, fostering a language of global solidarity. “Women of the world unite” became a new version of “workers of the world unite.” In bestselling feminist anthologies such as Sisterhood is Powerful (1970), China was the most prominent example of feminist futures. One of the main mantras of the movement, “the personal is political,” was first written by North American feminist leader Carol Hanisch. In 2012, she told me that she, as well as many of her peers, was mainly inspired by Mao.

Indeed, some of the second-wave feminists’ key social technologies, including consciousness-raising sessions and the study group, were inspired by similar techniques used in China. These women endeavored to understand their own difficulties not as individuals, but as part of a socially shared experience, and rallied together to subvert diverse forms of patriarchal power. They experimented with consensus-based decision-making, prefigurative egalitarian politics, and read inspirational books such as William Hinton’s Fanshen (1966), with its riveting accounts of China’s massive social transformations.

They created new media avenues, such as the Feminist Press, which published “important works by women authors, feminist biographies of women, and nonsexist children’s books.” This press published works such as Agnes Smedley’s writings from the 1930s, Portraits of Chinese Women in Revolution, and continued to refer to China’s example until as late as 1976, after the Cultural Revolution had lost much of its early energy.

I am not arguing that all aspects of this North American feminist movement were created in relationship to China, but these diverse examples show the key role it played. Once Chinese ideas began to circulate in North America, what happened diverged from what occurred in China itself, where feminism was managed by a state apparatus. Western second-wave feminism created new institutions not found in China, such as rape crisis centers, crisis hotlines, battered women’s shelters, and women’s drop-in centers. By the mid-1970s, as radical feminist activism began to wane, more sober accounts of Chinese women's lives began to appear.

Once Chinese ideas began to circulate in North America, what happened diverged from what occurred in China itself, where feminism was managed by a state apparatus.

Now, almost 50 years after its beginnings, assumptions persist that all aspects of North American second-wave feminism were homegrown, contributing to the notion that feminism was created independently by Euro-Americans, only to become globalized in the 1980s and 1990s. Thus, the role that Chinese revolutionary ideas played in Western second-wave feminism is one of many stories of Asia the global. These stories reveal the deep, impactful ways Asia has influenced the global, yet they remain largely unacknowledged.

Michael J. Hathaway is an associate professor of cultural anthropology at Simon Fraser University in Vancouver, Canada. His first book, "Environmental Winds: Making the Global in Southwest China" (University of California Press, 2013), won the Cecil B. Currey Book Award for best book on development studies. The book explores how environmentalism was refashioned in China, not only by conservationists, but also by rural villagers and even animals. His studies of China’s last herd of wild elephants explore how they themselves act to reshape physical and social landscapes as they engage with villagers, scientists, and animal rights activists. His second major project examines the global commodity chain of the matsutake, one of the world’s most expensive mushrooms, following it from the highlands of the Tibetan Plateau to the markets of urban Japan. He works with the Matsutake Worlds Research Group, looking at the social worlds this mushroom engenders in Canada, the United States, China, and Japan.