Is There Space for Europe in the Asia-Africa Growth Corridor?

Spearheaded by India and Japan, the Asia-Africa Growth Corridor aims to improve intercontinental connectivity. But, as of now, this competing plan to China’s Belt and Road Initiative is only a proposition. To make it a reality, India and Japan must enlist the EU.

The Asia-Africa Growth Corridor (AAGC) is a cooperation framework between Asia and Africa, led by India and Japan. In a way that mirrors the Chinese-sponsored Belt and Road Initiative (BRI), AAGC focuses on connectivity and infrastructure, in addition to development. Unlike BRI, AAGC is, for the moment, only a proposition.

To push the initiative forward, India and Japan may require additional partners, which could come in the form of the EU. As the continent between Asia and Africa, Europe is perfectly placed to work on the corridor. Like India and Japan, it promotes the principles of an open, fair, "rules-based international order." And as the US continues to withdraw from Asia and Africa, this could be a good chance for the EU to play a bigger role on the global stage.

India and Japan: Confluence with the EU

India’s relationship with the EU has been undergoing a fundamental shift over the past two decades. Characterized historically by the imbalances of colonialism, and more recently, aid, today as the leaders of India and the EU have intimated, the two are engaged in a partnership of opportunities.

India and the EU may not see eye to eye on all issues (climate change comes to mind), but the two share a broad commitment to democratic development. The EU is India’s top trading partner, and, though long-delayed, talks on a free trade agreement between the two continue.

Despite, and also because, of its uneasiness over China, the EU is eager to gain more of a foothold in Asia.

2017 saw the 14th India-EU summit, during which the two sides affirmed their partnership in security, geopolitics, trade, and investment. Also, India and the EU continue to pursue the EU-India Agenda for Action-2020, agreed upon at a previous summit. The agenda explicitly indicates that the two intend to “strengthen foreign policy cooperation, in areas of mutual interest such as Asia, Africa, the Middle East/West Asia, Europe.” One of the ways this could manifest itself is in AAGC.

As for Japan, both it and the EU have long heralded the benefits of deeper cooperation, but concrete plans on how to do this have been elusive. This, however, could be changing. In December 2017, Japan and the EU concluded negotiations on an economic partnership agreement, which the EU called the “biggest bilateral trade agreement” it had ever negotiated. Soon after, Prime Minister Shinzo Abe, accompanied by 30 Japanese business representatives, became the first sitting Japanese prime minister to visit Eastern Europe in over a century.

These agreements provide a formal, legal basis for deeper cooperation between Japan and the EU on a host of issues. And the two sides’ eagerness to collaborate economically and strategically could very well extend to AAGC.

An Opportunity for the EU 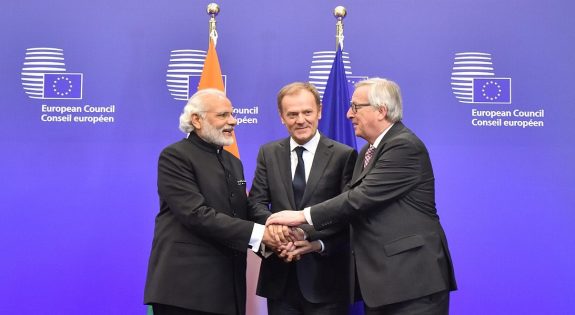 The EU, for its part, is looking beyond China in its Asia strategy. Once enthusiastic (or, at least, cautiously optimistic) about BRI, the EU has increasingly expressed wariness and alarm over the initiative. This anxiety took on an official air in April 2018, when 27 out of 28 national EU ambassadors to China compiled a report that said BRI “runs counter to the EU agenda for liberalizing trade and pushes the balance of power in favor of subsidized Chinese companies.” With some European countries, like Hungary and Greece, receiving substantial amounts of Chinese money, the EU is also concerned that BRI and other cooperation initiatives with Central and Eastern Europe could disrupt EU unity.

Despite, and also because, of its uneasiness over China, the EU is eager to gain more of a foothold in Asia. The Asia-Europe Meeting has been laying the groundwork for this since 1996. To take cooperation to the next level, the EU has released a roadmap for improving Europe-Asia connectivity. In part, the roadmap seeks to affirm a consolidated Asia strategy for the whole EU. Considered in conjunction with the report by the EU ambassadors, it can be seen as a declaration by the EU that China and BRI are not the only roads to Asia.

The EU is aided in its goal by the withdrawal of the US from the Asia-Pacific. Having dropped out of the Trans-Pacific Partnership, the US has, in effect, relinquished its position as Asia’s leading Western partner. This presents a prime opportunity for the EU to take over that role, and one obvious way for the EU to ingratiate itself with Asia while, in a way, countering BRI is through AAGC.

The prime intent behind the AAGC proposition is to forge an intercontinental growth and development corridor between Asia and Africa, and Europe is perfectly placed geographically to facilitate that. However, in recent years, the EU’s stances on critical issues such as migration and security have drawn severe criticism from African countries. The EU seems determined to mend its damaged relationship with Africa, as it now stresses development over stemming migration as its primary drive in engagement with the continent.

The participation (and economic clout) of the EU would go a long way towards making AAGC a reality.

India and Japan have made no secret of their desire to “strengthen connectivity [with Africa] through quality infrastructure investment,” and they have separately invested in African countries to achieve this goal. For example, Japan has tried to institutionalize its relations with Africa through the Tokyo International Conference on African Development. India has signed memoranda of understanding with various African partners on a range of issues, such as ICT and tourism.

Through the proposition of AAGC, they have made clear that they want to combine their efforts in this area, with a shared view of taking African concerns on board. The participation (and economic clout) of the EU would go a long way towards making this a reality.

India and Japan do not explicitly portray the corridor as a counter-initiative to BRI. Both Prime Minister Abe and Indian Prime Minister Narendra Modi have even displayed a will to consolidate their countries' relationships with China and ease political frictions. But, as it hopes to make inroads in an area where BRI has firmly established itself, AAGC will need the backing of a strong intercontinental framework. The EU is in good position to provide that, and considering the benefits it would reap from joining AAGC, it would be nothing short of a win-win situation.

Panda, Jagannath. "Soft Balancing: Asia-Africa Growth Corridor (AAGC), India-Japan Arch in Contrast to the Belt and Road Initiative (BRI) and China’s Rising Influence." In China-India-Japan in the Indo-Pacific: Ideas, Interests and Infrastructure, edited by Jagannath Panda and Titli Basu, 269-92. New Delhi: Pentagon Press, 2018.
Opinions expressed in articles published by AsiaGlobal Online reflect only those of the authors and do not necessarily represent the views of AsiaGlobal Online or the Asia Global Institute

Institute for Defence Studies and Analyses

Jagannath Panda is a research fellow and the head of the East Asia Centre at the Institute for Defence Studies and Analyses (IDSA), New Delhi. He is the author of "India-China Relations: Politics of Resources, Identity and Authority in a Multipolar World Order" (Routledge, London & New York: 2017). He is an expert on Indo-Pacific security, Chinese foreign policy, India-China relations, and Northeast Asian security.