Strengthening intellectual property rights in the Asia Pacific is a priority for both the European Union and the United States. This is for good reason: They together received more than 70 percent of all international revenue for the use of intellectual property worldwide, according to World Bank data. Jean-Frédéric Morin of Université Laval in Québec, Canada, and Madison Cartwright at the University of Sydney in Australia examine the relationship between EU and US regulatory initiatives on Asia-Pacific IPR – and their apparent unnecessary duplication. 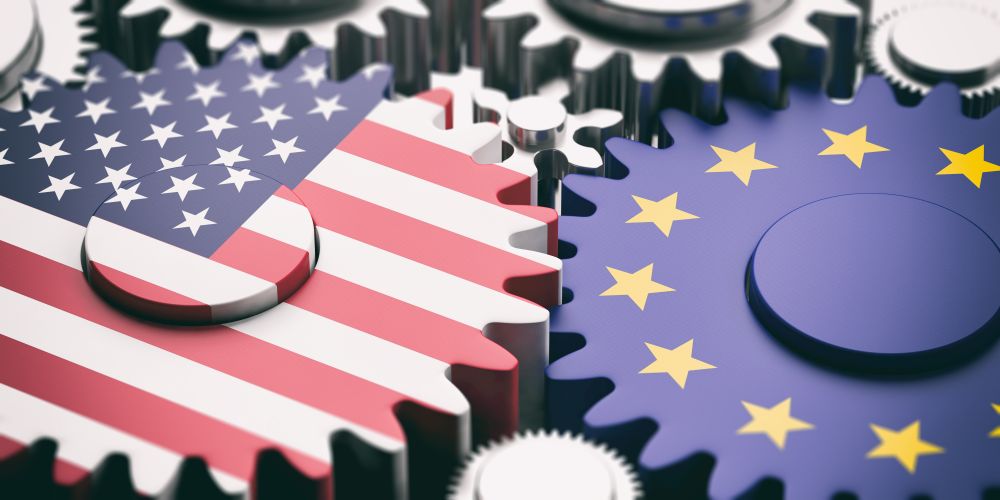 Regulatory powers: In their efforts to strengthen their intellectual property rights in the Asia-Pacific region, are the US and EU in sync or not? (Credit: rawf8 / Shutterstock.com)

For the past several decades, the European Union and the United States have worked toward a greater degree of harmonization of intellectual property rights (IPR) in multilateral settings such as the World Intellectual Property Organization (WIPO) and the World Trade Organization (WTO). A multilateral option, however, is less available today than it was 25 years ago. Coalitions of developing countries have fiercely criticized multilateral forums for being biased in favor of IPR holders. Consequently, the EU and US are now pursuing their IPR objectives in Asia through bilateral and unilateral initiatives.

The literature suggests that the growing number of EU and US initiatives in the Asia Pacific creates two potential outcomes for their interactions. The first is regulatory competition. Although the EU and US both support greater protection for IPRs, they have different domestic coalitions for different types of IPRs. Thus, when working outside multilateral institutions, the EU and US are likely to attempt to diffuse their own specific regulatory preferences and rally a coalition of countries around them.

We find only limited evidence of regulatory competition or regulatory coordination, however. Instead, there is strong evidence for a third outcome, which contradicts much of the existing theories on regulatory interactions.

By incorporating IPR provisions into trade agreements, both the EU and US have encouraged Asian countries to assume levels of IPR protection similar to their own. The most significant advancement in multilateral IPR rule-setting was the adoption of the Agreement on Trade-Related Aspects of Intellectual Property Rights (TRIPS) in 1995. Since then, the EU and US have been promoting their IPR standards through bilateral and regional trade deals. Most of these recent trade agreements include “TRIPS-plus” provisions, i.e. they provide higher levels of protection than TRIPS.

US and EU partner selection does not reveal a clear division of labor. Some countries are only party to a single agreement with either the EU or US, but there is also overlap. South Korea, Vietnam and Singapore have bilateral agreements with the EU and the US. Meanwhile, neither the EU nor the US has a fully-fledged trade agreement with China, the largest economy in the region. 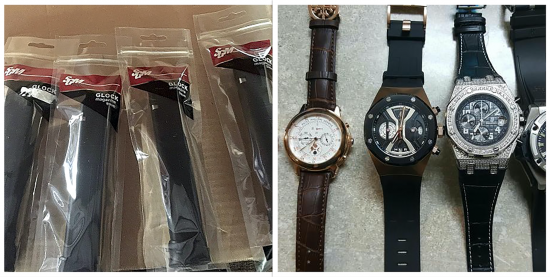 Counterfeits confiscated in the US: Gun magazines from Southeast Asia seized in Savannah, Georgia, and watches from China intercepted in San Juan, Puerto Rico (Credit: US Customs and Border Protection)

The TRIPS-plus provisions that the EU and US include in their trade agreements are similar. There are notable exceptions, however. For example, the well documented disagreement on geographical indications (GI) is evident. The EU includes GI standards in its trade agreements, while the US does not. The EU has struggled to reach GI provisions in its agreement with Vietnam, which had previously committed to US-favored provisions during the Trans-Pacific Partnership (TPP) negotiations (which included the US at the time, as well as countries such as Australia that supported the US position). Yet, apart from this regulatory competition over GIs, the EU and US broadly favor a similar approach to IPRs in their respective trade agreements.

Both the EU and US use coercive mechanisms to pursue their interests on IPRs globally. Every year the United States Trade Representative (USTR) releases a Special 301 Report, which identifies countries with a level of IPR protection deemed insufficient or inadequate. The reports use a tiered system: Priority Foreign Countries and the Priority Watch List are the most severe; Watch List countries are less severe. Countries risk trade sanctions if they fail to address problems relating to their protection of IPRs.

The EU created a similar mechanism. The EU reports can lead to binding and enforceable decisions, which can be used to pursue sanctions against third parties. Under the EU mechanism, as with Special 301s, there is a clear path from priority-country status to sanctions.

The EU and US unilateral mechanisms have largely targeted the same countries in the Asia-Pacific region. In the past 15 years, China has been the main target of both the US and the EU mechanisms, followed by Indonesia and Thailand. One difference between the EU and US is the Philippines, which was listed as a priority two country for the EU, but does not appear on recent US Priority Watch Lists.

The US has been more assertive than the EU when using coercion against China. While both the EU and US have primarily targeted China with their coercion, only the US has actually imposed trade sanctions. IPRs were one of the main reasons for the Trump Administration’s 301 investigation, which was launched in August 2018 and led to tariffs being imposed on US$365.3 billion worth of imports from China. In contrast, the EU did not increase its tariffs on Chinese goods.  Nevertheless, the EU has identified China as a “systemic rival” to Europe and condemned China’s “unfair” trade policies and “lack of reciprocal market access”.

Despite notable exceptions, the EU and US have largely replicated each other’s efforts. They target a similar cohort of countries and focus on a similar set of IPR issues. Their initiatives in the Asia Pacific are not coordinated to serve their shared interests, nor do they undermine the work of either party. There is, therefore, no apparent regulatory competition or coordination via a division of labor. Instead, the EU and US generally replicated each other’s work.

Replication can be more accurately described as the EU duplicating the US’s international IPR initiatives. The EU’s IPR reports reflect the US’s Special 301 Reports, which were introduced in the 1980s. The EU developed its more aggressive TRIPS-plus trade strategy after the US’s spate of TRIPS-plus agreements in the early 2000s. The EU’s imitation of (or learning from) the US has generated redundancies, however. This begs the question: Why does the EU duplicate US efforts in the first place?

As a result of the most-favored-nation principle, concessions made by Asian countries to the US are automatically extended to the EU so there is little need for EU instruments to reaffirm them. Moreover, if US trade pressure failed to extract concessions from Asian countries, there is little reason to believe that the EU would be more successful. Replication has the potential to act as a de facto form of coordination if the EU and US reinforce each other’s efforts. However, there is little evidence to suggest that the combined US and EU efforts are more successful than when they exert pressure individually.

Understanding why the EU is following the US is a subject for future research. One potential explanation could be linked to the EU’s domestic political economy: European leaders might duplicate US strategies to signal to their IPR-dependent constituents that they care about their interests. Another explanation could be that bureaucrats and negotiators reinforce their professional identity and reduce political risks by sticking to established norms and procedures. Or perhaps the EU’s strategic objective is to increase the number of forums to negotiate rules and adjudicate disputes with a view to creating opportunities for forum-shopping strategies (efforts to find a setting which would be more likely result in a favorable outcome).

The US and EU’s replication of each other’s strategies raises important policy implications for Asia-Pacific countries. When Asian governments negotiate IPR with the US or the EU, they should be aware that making concessions to one is unlikely to reduce pressure from the other, even though bilateral concessions benefit IPR holders globally. Moreover, by engaging bilaterally with the US and the EU, Asian countries are likely to bear the brunt of the EU/US rivalry over GIs. In this context, it is in their interest to prioritize multilateralism and support negotiations in multilateral settings. Even if some Asia-Pacific countries have expressed strong criticisms of IPR multilateral institutions in the past, multilateral institutions might still be their best option for negotiating IPR.

This article is adapted from the authors’ paper "The US' and EU's Intellectual Property Initiatives in Asia: Competition, Coordination or Replication?" which was published in Global Policy on November 24, 2020. 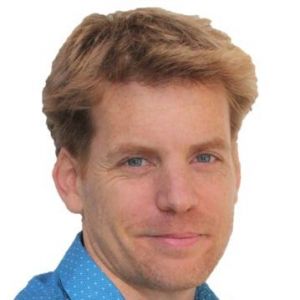 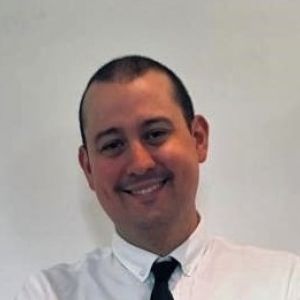 Madison Cartwright is a lecturer in the Department of Government and International Relations at the University of Sydney, Australia. Madison was a postdoctoral researcher at the École supérieure d'études internationals at Université Laval in 2019. His research interests include international institutions, intellectual property, business-state relations and historical institutionalism.