Their environment leaves them little space for personal expression, but Hong Kong’s domestic workers have found ways to engage in politics and pursue their own paths of leadership. 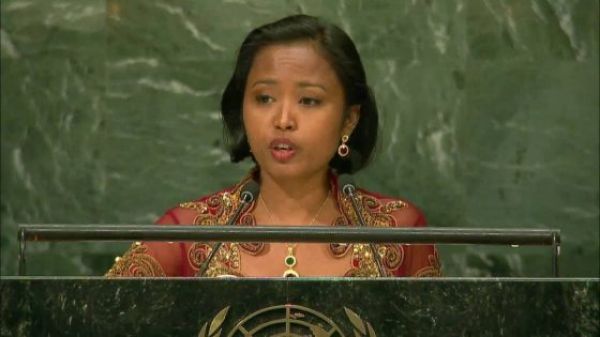 Eni Lestari at the UN Summit for Refugees and Migrants, 2016.

It was a typical Sunday for Nur Halimah. Early in the morning, she and her friends from the Hong Kong Indonesian Migrant Workers Co-op were busy in the kitchen that they had rented in the Shek Kip Mei district, preparing packed lunches and snacks for fifty people. After delivering the food to the participants of a leadership workshop in the Jordan district, she went on to Chai Wan Sports Centre, where she helped run the annual Prime Liga badminton tournament for migrant workers.

Nur is the chairwoman of a migrant workers’ organization called Kotkiho, or the Hong Kong Coalition of Indonesian Migrant Workers’ Organisations, an umbrella group for eight different migrant workers’ organizations in the city. Most people recognize Hong Kong’s role as a financial hub and a playground for the world’s management gurus. Few know that the city also breeds influential leaders of a different kind. These are women organizers who rise to prominence among the over 300,000 migrant domestic workers employed in the city, mostly from the Philippines and Indonesia. By engaging in political activity both locally and internationally, these women have become a vital pillar of political power in Hong Kong society.

A Hard Course of Leadership

These women leaders’ lives as domestic helpers are mostly hidden within the walls of the high-rise apartment blocks where they are obliged to live with their employers. Only on Sundays and public holidays can they go out and conduct activities with their peers in the city’s public spaces. After all, they were brought in as imported labor to perform a specific job and nothing else. Given these constraints, their story of empowerment is even more remarkable.

Among other destinations in East Asia, Hong Kong is considered a haven for migrant domestic workers from the surrounding region. The city’s standard labor law guarantees basic rights such as minimum wage, mandatory holidays, and, crucially, freedom of organization.

These women leaders’ lives as domestic helpers are mostly hidden within the walls of the high-rise apartment blocks where they are obliged to live with their employers.

But the law does not always guarantee safety. When the first generation of migrant domestic workers arrived in Hong Kong from the Philippines in the early 1980s, the women encountered a wilderness of abuse and exploitation. Nicole Constable recorded some of the harrowing stories in her pioneering ethnography Maid to Order in Hong Kong (1997). When the Indonesians started arriving in the late 1990s, they suffered the same fate.

A series of court cases and frequent public rallies by migrant workers and their local supporters put the problem of abuse under the spotlight. The situation has since improved significantly, but even as recently as 2014 the public was mortified to learn of the case of Erwiana Sulistyaningsih, who was physically abused by her employer and dumped at the airport when she was rendered unable to walk.

An important factor in the improvement of the situation of migrant workers is the role of civil society groups such as NGOs, trade unions, and church charities. These organizations have helped migrant workers in addressing abuse and subsequently in finding their voice. From them, migrant workers have learned the language of advocacy and human rights, and the efficacy of organizing.

In fact, Hong Kong is now home to hundreds, if not thousands, of migrant workers’ organizations, including three unions that are officially registered at the Department of Labour. These organizations provide a space for migrant workers to learn leadership skills. The earliest generation of migrant worker leaders were empowered by their own experience of overcoming hardship; this learning process has now been institutionalized through the discipline of organizational practice.

It was through that process that Eni Lestari became the co-founder and first chairperson of the International Migrants’ Alliance, a global coalition of grassroots migrants’ organizations with membership from 32 countries. In September 2016, she was invited to speak at the UN Summit for Refugees and Migrants. With her eloquence and extensive experience in organizing, Eni is often invited to address and contribute to international conferences.

One common trait of many migrants’ organizations is their business skills. In a city that takes pride in its entrepreneurial spirit, the members of these groups refuse to be idle, even on their rest days. Titi Pranoto is a case in point. She is the manager of a group that specializes in providing cooking lessons and catering services for fellow Indonesian migrants. The group works out of an apartment it rents in Causeway Bay, which costs HK$17,000 per month, excluding utilities. The cooking lessons and catering services run only on Sundays and public holidays, but Titi sublets the bedroom and the kitchen for people to use on a daily basis. On top of that, she also offers storage space for a small fee for migrant workers who lack space for their belongings.

In a city that takes pride in its entrepreneurial spirit, the members of these groups refuse to be idle, even on their rest days.

Their business dealings, however, are not driven solely by profit. Many migrants’ groups send much of the proceeds of their businesses to charitable causes back in Indonesia. For the past few years, Dina and her friends, all members of a Quran recital group, have been sending the money they earn through providing catering services to a boarding school in Yogyakarta, Indonesia. The school is designated for children of migrant workers like themselves, who would otherwise be in danger of growing up without proper guardianship. Earning minimum wage does not stop these groups from engaging in philanthropy.

Philanthropy can serve as rehearsal for more political activism. Sumiati, who first arrived in Hong Kong in 1989, has helped found a number of migrants’ organizations. Her latest adventure was joining the National Awakening Party, an Islamic political party in Indonesia that launched its Hong Kong branch in the run-up to the 2014 Indonesian general elections. Having been frequently exposed to civil society groups in Hong Kong, she developed a belief in politics as an effective way of engendering change for migrant workers. Sumiati has extensive networks across the city, owing to her many years of organizing. This gave her an edge in reaching out to potential voters among fellow migrant workers. Along with 40 other volunteers, she went around Hong Kong campaigning for the party, often paying travel costs out of her own pocket.

From Poverty to Power

On November 10, 2017, Eni received a Hong Kong American Chamber Women of Influence Award. In her speech, she highlighted the rights of migrant domestic workers, reflecting on her own long way to empowerment. Afterwards she giggled when recounting the event; she shared a stage with high-powered business leaders for the first time, even if only momentarily. After the award ceremony, she stopped by Bethune House, paying respect to the shelter that took her in when she fled from her abusive employer almost 17 years ago.

These migrant workers are influential leaders in their own right. Any attempt to limit their influence is a tacit acknowledgement of their growing power.

But let’s not get too carried away. Eni still had to return to her employer’s home the night she received the award. Her freedom is partial and conditional. She and her fellow migrant workers are still constrained by the triple bind of living as foreigners, being women in a patriarchal society, and doing a menial job that commands little respect. Furthermore, the Hong Kong government is planning to bring in domestic workers from other countries so as not to be too dependent on Indonesia and the Philippines. Critics say this doubles as a move to undermine the power of migrants’ groups.

Though difficulties and limitations remain, these migrant workers are influential leaders in their own right. Any attempt to limit their influence is a tacit acknowledgement of their growing power. This is the power that has been used to improve Hong Kong’s migrant worker protection regime, to make a difference to the vulnerable in “Asia’s Global City.” And it has certainly turned these women’s Sundays into a hive of activity.

Benny Hari Juliawan is a 2017 AsiaGlobal Fellow and a lecturer at the Graduate School of Religious and Cultural Studies at Sanata Dharma University in Yogyakarta, Indonesia. His main research interests are trade union movements, labor migration, and politics of marginalized groups in Indonesia.