For a Truly Global Peace Agenda in a Multipolar World

China and the Asian region more broadly are taking pivotal roles in leveling the playing field for developing nations when it comes to driving global policies and multilateralism. Cecilia Milesi, a 2019 AsiaGlobal Fellow of the Asia Global Institute at the University of Hong Kong, and Lauren Hess from Georgetown University argue that the wider sharing and adoption of best practices to prevent and address conflicts significantly broadens the pursuit of world peace. 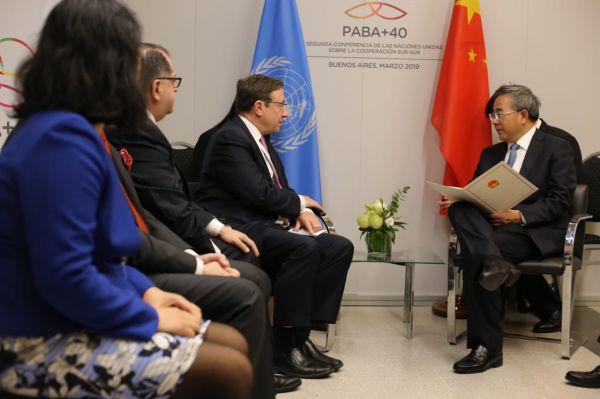 Those working in international affairs would not be surprised to observe that a small number of countries and institutions spearhead a “global peace policy agenda”. In reality, several asymmetries in peacemaking knowledge and decision-making demonstrate that the adjective “global” is merely cosmetic. Within the United Nations, this historic inequity is clearly reflected in the way the organization functions.

Recently, however, a notable power shift has been occurring: Countries from the Global South are using the framework of South-South cooperation to become more active and vocal, particularly in relation to the peace and security challenges that directly affect them.

South-South cooperation (SSC) is both a framework and a political call for developing nations to strengthen collective self-reliance and share best practices to address common challenges. The South-South agenda is crafted by 135 countries from the Global South associated within the G77 and China in dialogue with all UN General Assembly members.

Not surprisingly, with most Global South countries among those directly affected by conflicts and insecurity, a stronger South-South agenda focused on sustaining peace has emerged. An increase in regional and Global South-led initiatives for conflict prevention in Latin America, Africa and Asia are further signs of this swing in power dynamics. When it comes to driving the global peace policy agenda, China and the Asian region in particular are playing a pivotal role in leveling the playing field in a multipolar world.

The shifting dynamics of peacebuilding

Within the UN, a select bloc of countries has traditionally held a stronger grip on multilateral peace narratives and policy templates. Unfortunately, countries and citizens in the Global South have long been perceived as mere “receivers” of peace and security policy-making, rather than originators of knowledge and transformative action. This asymmetry is not only evident in multilateral structures but is manifested in the narrow policy agenda which confines peacebuilding to increased militarization (both peacekeeping and military intervention), policing, top-down and short-term mediation, as well as exogenous and rushed implementation of peace agreements.

It appears, however, that this asymmetry will not remain unchallenged. Southern member states have begun to assert their influence and expertise to effectively claim their space.

Much of this advocacy has been channeled through extensive policy dialogues sustained before, during and after the historic Second High-Level United Nations Conference on South-South Cooperation (known as BAPA+40) held in Buenos Aires in March 2019. The UN Office for South-South Cooperation (UNOSSC) offered institutional support to coordinate an initial conversation on SSC for sustaining peace, a theme that was not traditionally included in the SSC agenda.

These conversations took the form of several high-level events, the facilitation of a working group of Global South think-tanks, and the dissemination of knowledge products providing case studies that demonstrated the value of SSC in sustainable peace and development. This was a deliberate multilateral effort to produce knowledge on the ways in which Southern countries are, in fact, supporting one another in the promotion of peace, always, considering local demands and specific challenges. This is politically relevant as it challenges traditional core-periphery understandings of which countries are knowledge producers; thereby shaping a more inclusive peace and security agenda.

Another achievement from the negotiation efforts prior to BAPA+40 was the final outcome document adopted by 160 countries. It highlighted the need to consider the socio-economic dimensions of sustainability in making progress towards peaceful and prosperous societies.

This marked a clear shift towards a positive understanding of peace, which is mirrored by the UN’s internal shift towards the Sustaining Peace agenda in which all activities to prevent the outbreak, escalation, continuation and recurrence of conflict take a stronger role. The language in the BAPA+40 outcome document provided a more holistic and systemic narrative of peace. The peace-security-development nexus seems to be perceived as an enabler of peaceful societies.

This strengthens the UN’s three pillars – human rights, peace and security, and development – in a mutually reinforcing way. Notably, the prevention of climate change crisis and important themes such as women empowerment are included as SSC priorities. The outcome document will serve as the guiding document for SSC worldwide from now on.

As one consequence of this advancement, the UN Peacebuilding Commission (PBC) organized its first ministerial meeting solely aimed at discussing the relevance and role of South-South solidarity to sustain peace. During the meeting, PBC members expressed strong support for South-South Cooperation for sustaining peace, embracing the opportunity to break the silo between sustainable development and the peacebuilding agendas. The PBC is perceived by many Global South countries as a “safe” space to share concrete ideas to promote conflict prevention and peacebuilding measures that could complement or serve as an alternative to punitive interventions which, at times, are perceived as more intrusive and counterproductive.

In the context of this institutional shift, more empowered states in the Global South are playing more active roles. China in particular has relished the opportunity to use SSC as a means to further challenge traditional multilateral powers, supporting other countries in the region in doing the same. China and other countries and Asia are playing a pivotal role in a crafting a more diverse and inclusive dialogue on peace and security in the changing world.

In times of increasing attention to the so-called “Beijing Consensus”, China – with many other Global South countries such as South Africa and Mexico – is playing a relevant role in expanding the narrative of peace. In particular, China highlights that the eradication of poverty and the decrease of inequality are issues that are pertinent to the peace agenda. China stresses the need to address socio-economic exclusion as one of the core root causes of violent conflict, although Beijing is finding that narrative currently being tested in Hong Kong.

In this sense, China is increasing its investments abroad – notably through its Belt and Road Initiative (BRI). In the recently published white paper “China and the World in the New World Era”, China’s State Council declares that the BRI is one of the many Chinese global initiatives to promote a “shared future and benefits”. As such, the BRI is presented as “Chinese wisdom and solution” to protect world peace and promote common development.

China is using South-South cooperation as a means to challenge traditional multilateral powers, supporting other countries in the region in doing the same

Many countries in the Global South regions have been negotiating with China on BRI participation with the aim of expanding economic opportunities. However, it must be noted that BRI initiatives have not been without controversy, especially with regard to debt and quality concerns. Aside from its ambitious trade and development goals, China has also invested significant resources into multilateral peacebuilding initiatives with a US$200 million contribution to the UN Peace and Development Fund over 10 years in tandem with its growing contribution to peacekeeping operations.

Regionally, the Association of South East Asian Nations (ASEAN) provides a framework for balancing regional power dynamics. While ASEAN is no stranger to traditional SSC, a specific sign of the revitalization of the peacebuilding policy is the increased activity of the ASEAN Institute for Peace and Reconciliation (ASEAN-IPR), which was established in 2011. This year, it established the first roster of women peacebuilders in the region and organized a research and learning exchange initiative to increase knowledge of peace processes in the Philippines.

This revival of regional exchanges to enhance locally relevant conflict prevention is another example of increasing South-South mutual support. ASEAN is one of many regional and sub-regional organizations which, together with their African counterparts, are actively increasing cooperation in conflict prevention.

The UN, meanwhile, is setting up more solid mechanisms for dialogue with regional organizations, signaling that regional actors are vital factors to sustain peace. The g7 +, a voluntary association of Global South countries that are or have been affected by conflict, is involved in the promotion of peace, security and development. Steered by Timor-Leste, the group plays a vital role in supporting collaboration among its 20 members and has requested UN observer status to improve multilateral approaches to fragile states.

The debate and reflection initiated during and after BAPA+40 offers an opportunity to begin strategically incorporating SSC within the UN’s Sustaining Peace agenda. Democratizing peace and security policy-making is not only an ethical imperative, but one which could arguably revitalize the fragile legitimacy of multilateral institutions like the United Nations. Empowering voices from the Global South through democratized knowledge production and dissemination and by renewing institutional support for inclusive bodies such as the PBC allows states in the Global South to share a wealth of experience and expertise that has only recently been spotlighted within the UN System.

As the need for truly global action becomes increasingly urgent in the fight against root causes of conflict such as climate change, socio-economic exclusion, and past unsuccessful military intervention, the evolving narrative of South-South multilateral ownership, supported by ongoing collaboration in the Asian region, could provide new paths to sustainable peace.

Milesi, Cecilia. (September 12, 2019) “The role of South-South Cooperation in realizing the vision of peace and development for all”, AsiaGlobal Fellows, Asia Global Institute.

Cecilia Milesi is a 2019 AsiaGlobal Fellow at the Asia Global Institute of the University of Hong Kong. Born in Argentina, she has been working professionally in the fields of human rights, conflict prevention and transformation, inclusive development and mobilization for change. Prior to taking up her fellowship, she was senior advisor on South-South cooperation on peace and development at the United Nations Office for South-South Cooperation (UNOSSC). Lauren Hess is a 2017-2019 Visiting Fulbright Student based in Washington, DC, where she recently completed the Master of Science in Foreign Service program at Georgetown University.

Wednesday, October 13, 2021
Drawing on its own experience and lessons from other nations, China could portray the circular economy as a future-proof, carbon-neutral economic development model.

Why Efforts to Achieve the Sustainable Development Goals are Flagging: An Emerging Economy Perspective

Tuesday, October 12, 2021
The pathway to 2030 is likely to be set by the standards, practices, and policies of the non-state business sector.

Thursday, October 7, 2021
While the two parties share many interests on which their cooperation is based, they still diverge significantly in their approaches to technology and data.

Thursday, October 7, 2021
Dividing data into jurisdictional compartments and potentially data storage centers and the internet, too, would be a regressive move.

Thursday, September 30, 2021
ASEAN has been put in an increasingly difficult position if it is to preserve its neutrality, assert its much-prized centrality in the region, and maintain cohesion.

Wednesday, September 29, 2021
Disruptions and disputes among the major powers with interests in the region should not hinder deeper cooperation if all players focus on trade and investment.