In reaction to a seemingly neverending torrent of food safety scandals, an alternative food movement is growing in China. This has implications not just in the country’s food supply system, but also in domestic politics and community-building. 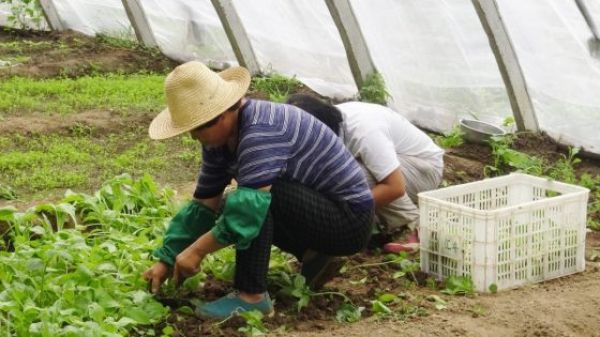 “Good food”—food that nourishes communities and sustains healthy ecologies—has been at the center of social movements around the world over the past four decades. The array of foods available in “local” places and conditions surrounding “local” food production have increasingly become the product of complex global systems of capital and trade. In response, farmers and activists have called for food sovereignty, food justice, fair trade, agroecology, and solidarity. Although the specific concerns of grassroots groups can be quite diverse, many connect near-at-hand problems of land, labor, and food access to broad, global concerns about the environmental and social harms of capitalist food regimes.

China’s growing alternative food movement, which is roughly a decade old, bears a distinct familial resemblance to movements elsewhere, and it has been strongly informed by developments abroad. Participants in this movement advocate for direct relationships between growers and eaters of food as a means to secure food quality and fair prices. This logic of short supply chains—“eating food with a farmer’s face” —is held in common with other movements around the world.

But familial resemblance is only part of the story. China’s alternative food movement draws on a rich domestic legacy of peasant organizing, and it has taken shape within a political climate in which problems in the food system figure as signs of serious social ills.

The Birth of the Alternative Food Movement

Between the mid-1990s and early 2000s, China’s countryside was in crisis. Due in part to a restructuring of state fiscal policy, farmers faced onerous tax burdens and depressed prices. A coalition of concerned academics, researchers, and local officials sought a solution, and they found an answer in the Rural Reconstruction Movement. This was a reform movement that flourished in the 1920s and 1930s that looked to meliorate rural hardship through experiments with peasant education, cooperative economy, and village self-governance. From the coalition’s efforts, the New Rural Reconstruction Movement was born. It encouraged farmers to form cooperatives to increase members’ incomes and enrich village cultural life. Some cooperatives began to use environmentally friendly production techniques to improve the health of farmers and rural agroecosystems.

By the mid-2000s, New Rural Reconstruction projects were encountering a thorny problem: selling. How do they sell cooperative-grown, high-quality products for and at a fair price? To answer this question, a group of professors at Beijing’s Renmin University began investigating the community-supported agriculture (CSA) farming model, which links producers directly to consumers. Under the common iteration of this model, consumers pay farmers a lump sum at the beginning of the growing season in exchange for a share of the overall harvest.

China’s alternative food movement has taken shape within a political climate in which problems in the food system figure as signs of serious social ills.

In the second half of 2008, a massive food safety scandal erupted into public awareness. Prominent dairy companies were found to have been systematically engaging in adulteration. Milk powder tainted with industrial melamine caused kidney disease in thousands of children; ultimately, six babies died. This unsettling scandal prompted many ordinary urban consumers to consider the sources of their daily meals.

At the same time, Shi Yan, a PhD student at Renmin University, returned to Beijing after spending a season at a CSA farm in rural Minnesota, and established her own CSA farm, Little Donkey, in a village northwest of Beijing. She found that city residents were eager to invest in her novel food-sourcing scheme. Little Donkey’s success made way for a wave of new food-related projects across China, all seeking to directly link producers and consumers.

In support of this nascent movement, the institutions and networks of the New Rural Reconstruction Movement shifted the emphasis of their work to fostering rural-urban mutual aid and cooperation to benefit consumers as well as farmers. In the scope of China’s overall food system, the alternative food movement is still relatively tiny, but, driven by intense consumer interest, it is rapidly expanding. My interlocutors estimate that there are now about 500 CSA farms in China, each serving hundreds of families.

The stakes in accessing “safe” food are very high in China today. Over the decade since the melamine milk incident, food safety scandals have been a mainstay of the news, revealing the sheer ubiquity of fake and adulterated foods. These cases include recycled “gutter oil,” mutton kebabs made of rat meat, ersatz seasonings, and formaldehyde-tainted vegetables. Consuming such substances might or might not induce health consequences. For ordinary shoppers, the truly toxic thing has been the radical uncertainty involved in a trip to the supermarket or corner store. Poison could enter the family kitchen in seemingly endless guises.

Contemporary food safety problems are inexorably linked not just to modern family life, but also to ancient questions of political legitimacy. For thousands of years, Chinese states grounded the legitimacy of their rule in ensuring a sufficient grain supply for the population. Such food “fundamentalism,” as historian Lillian Li calls it, operated throughout the Maoist period and continues into the present day.

For ordinary shoppers, the truly toxic thing has been the radical uncertainty involved in a trip to the supermarket or corner store.

China’s food safety problems also recall a newer promise, one of the post-Mao economic reforms: that, under the Communist Party’s rule, a comfortable life of “moderate prosperity” will become available to all. In light of this historical context, the present crisis of unsafe food appears as a double breach of promise—a failure of the state’s obligation to ensure basic provision, and of its claim to be building better lives for its people.

New Modes of Fellowship and Community

In my dissertation research, I investigated direct sourcing at a fine-dining farm-to-table restaurant in Hangzhou, the capital of Zhejiang province. The restaurant is an influential node in the larger national alternative food movement network, and it supports its own sophisticated regional network of hundreds of farmer-suppliers. These suppliers agree to produce ingredients using traditional methods; in return, they expect high returns and consistent demand.

Over 16 months of fieldwork, I followed the restaurant’s team of procurement agents on their daily rounds to purchase seasonal ingredients in Hangzhou’s outlying rural areas. I found that agents and suppliers framed their interactions in the idiom of kinship. They called each other “big brother” or “big sister,” asked after each other’s children, shared meals, and exchanged small gifts. Over time, individual farmers and staff members constructed sturdy foundations of mutual trust—firm ground for food transactions, but also for lasting relationships that exceed these transactions.

As I traveled to study alternative food movement projects in Beijing, including CSA farms and farmers’ markets, I found a similar process at work in other direct sourcing arrangements. Farmers and consumers have built trusting personal relationships through iterated interaction and transaction. Food occasioned these relationships; but, in many cases, they have grown to be about something more than food: shared values, shared interests, a sense of common purpose.

In short, I found that new ways of sourcing food are creating new spaces for alliance and moral consensus. Ordinary Chinese continue to mistrust state oversight of the conventional food system, despite the introduction of a raft of policies to address and contain food safety problems. In the breach, in this space of mistrust, eaters and growers of food are relying on personal, horizontal social ties.

The new alliances forming within the alternative food movement stretch across class, and across the rural-urban divide. Most consumer participants in the movement belong to the urban middle classes, or “middle income” strata, that comprise over half of the population in major cities like Beijing and Shanghai. These consumers have ample disposable income to spend on food they feel is safe, tasty, and reliable, even if it costs more than conventional products in supermarkets or wet markets. By contrast, producer participants come from diverse backgrounds. Some are lifelong peasant farmers; others once held corporate jobs, and many well-educated young farmers and agricultural entrepreneurs are from rural peasant families.

China’s alternative food movement is succeeding in bringing trustworthy products to consumers and generating new, dignified livelihood opportunities for producers. Even more interestingly, the resulting new food sourcing arrangements have served as an invitation to new modes of fellowship and community.

Caroline Merrifield received her PhD in anthropology from Yale University in 2018. She is currently a lecturer in East Asian studies at Yale.