China in Africa: Practicing Diplomacy as a Great Power

China’s strategic approach to foreign policy has changed, and governments need to reorient to this new reality. A look at its actions in Africa reveals how China is employing its status as a great power on the diplomatic stage. 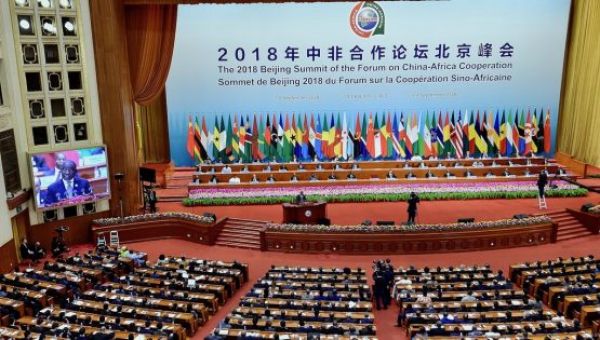 The 2018 Forum on China-Africa Cooperation in Beijing, China. Photo courtesy of the Government of South Africa

Over the course of his presidency so far, Xi Jinping has carefully but explicitly reoriented China from diplomacy with major powers to diplomacy as a major power. In other words, China is now engaging as an equal with the likes of the United States and Russia. This shift has also changed how it interacts with all other states, something that is particularly evident when we look at its presence in Africa.

China’s strategic pivot is defined by the protection of its core interests through the creation of a global “friendship network” that in turn upholds and benefits from China’s economic success and leverages its political penetration. Under Xi, there exists a non-negotiable condition for cordial relations with China: respecting its position on Taiwan, Tibet, the South China Sea, and other issues concerning its major interests, and by extension recognizing the legitimacy of the Communist Party.

With its now-ample economic and political clout, China leads a coalition that calls for the “democratization of international relations.” In service of this aim, China has expressed unflinching support for globalization and multilateralism. This strategy is supplemented by the establishment of institutions such as the Asia Infrastructure Investment Bank, the New Development Bank, and the Forum on China-Africa Cooperation (FOCAC). Additionally, China has shown great interest in events promoting joint global governance such as the G20 summit and the BRICS (Brazil, Russia, India, China, and South Africa) summit, eagerly playing host to several meetings of this kind.

China is now doing diplomacy as a great power, but very few countries have fully reckoned with this. These countries may receive economic benefits from China, but in return, they are expected to go along with China’s core interests, and that isn’t always acknowledged or adequately appreciated when bundles of cash arrive at one’s doorstep.

The Conditionality of Non-Interference

The recently concluded 2018 FOCAC reinforced every aspect of Xi’s major power diplomacy, with almost every African national leader joining Xi in Beijing. Indeed, China’s “friendship network” in Africa expanded in the run-up to the meeting when Burkina Faso cut ties with Taiwan. China’s stated commitment to non-interference in the internal affairs of African countries, described by Xi as the “five-no” approach, sets the stage for a “win-win" relationship. But, China has shown that this promise of mutual independence is conditional, in place only as long as its core interests are respected.

China is now doing diplomacy as a great power, but very few countries have fully reckoned with this.

In the beginning of 2018, a French newspaper reported that China had hacked the computer network it had installed at the African Union headquarters building in Addis Ababa, Ethiopia. This was a blow to the credibility of the non-interference principle. Furthermore, critics pointed to the fact that the discovery of the hack was kept secret for five years as a sign of Chinese dominance.

At the bilateral level, too, China has demonstrated the conditionality of its promise of non-interference. Its relationship with South Africa has been tested over the years by the issue of the Tibetan spiritual leader, the Dalai Lama. The Dalai Lama has been denied entry into South Africa three times (in 2009, 2011, and 2014) without any legal justification. In each of these cases the Chinese government admitted to “appealing” to its South African counterpart to deny the Dalai Lama a visa.

South Africa’s 2014 denial of entry to the Dalai Lama was perhaps most illustrative of the dilemma countries can find themselves facing when confronted with such situations. The Dalai Lama’s application for a visa in 2014 came after the Supreme Court of Appeal of South Africa declared the decision to deny him an entry visa in 2011 unlawful. The government’s options were grim. Granting the Dalai Lama a visa would mean damaging South Africa’s relationship with China, which could lead to punitive measures from the Asian giant. Not granting him a visa would mean going against a Supreme Court of Appeals ruling. Taking a position at odds with the Supreme Court of Appeals was not an option for a party that owed a significant part of its political hegemony to its stated commitment to the rule of law, as it could result in a loss of electoral support. At the same time, Chinese investments were directly responsible for at least 10,000 jobs and indirectly responsible for up to half as many. A decrease in Chinese investment could result in significant job losses, which could also compromise electoral support. In a balancing act, the government requested the Dalai Lama to withdraw his visa application.

The Consequences of Non-Alignment

While the Dalai Lama case illustrates an instance in which the threat to China’s core interests was unambiguous, there are other cases of Chinese intervention in Africa where it was less clear how China’s interests came into play. In 2016, for instance, China was alleged to have exercised its influence in Zimbabwe when it withheld economic assistance to the country until President Robert Mugabe vacated office.

The clarity, determination, and ambition of Xi’s diplomacy as a great power mark a transformation in China’s foreign policy that the world cannot afford to disregard.

Zambia stands as an example of a country that has suffered economic consequences due to a brief failure in respecting China’s core interests. Before becoming the president of Zambia in 2011, Michael Sata had referred to Taiwan as a sovereign state. While he did not proceed with his pledge to recognize Taiwan when he came to power, his credibility was already tainted as far as China was concerned. Thus, the relationship between China and Zambia underwent a massive change. During his predecessor’s time in office, trade between the two countries had grown by an average of 69% per year, but, during Sata’s presidency, trade between China and Zambia grew a mere 7% per year on average. Coincidentally or not, Zambia’s average per capita gross domestic product growth rate also shrank from 5.7% to 1.9% during this period.

The clarity, determination, and ambition of Xi’s diplomacy as a great power and its long-term outlook mark a transformation in China’s foreign policy that the world cannot afford to disregard. This calls for the adoption of pragmatic coexistence approaches for governments around the world. For countries in China’s “friendship network,” partnership will need to be constantly defined, evaluated, and reconsidered; relationship with a great power can often bring great discontent.

Yoshikazu Kato is an adjunct associate professor at the Asia Global Institute in The University of Hong Kong, a columnist for “The New York Times” Chinese edition, and the author of “How Will China Democratize?” (Diamond Press, Japan, 2015; Hanul, South Korea, 2018)George Lwanda is a policy and program adviser at the United Nations Development Programme Regional Service Centre for Africa, and a 2018 AsiaGlobal Fellow at the Asia Global Institute, The University of Hong Kong. He is an alumnus of the Mo Ibrahim Foundation’s Governance for Development in Africa program. The views expressed in this article do not represent the views of the United Nations Development Programme or the Asia GIobal Institute.