When the Dollar Spoke Spanish

What makes a currency global? The Spanish peso that started circulating internationally in the 16th century offers a case study. The opening of new trade routes and security innovations made it the world's most widely demanded currency. It facilitated the integration of China, the Americas, and Europe into a world economy, creating a status quo that lasted until the 19th century.

However problematical “global currency” may be to define, we in general know it when we use it. That currency today is the U.S. dollar, but it was preceded in this role by the Spanish and Mexican dollars of the 18th and 19th centuries, the former more accurately called the real de a ocho, or peso. These silver coins were accepted across the world, most notably in China, where they formed not just an important part of the money supply but also a reference against which other forms of exchange, including domestic Chinese taels, were measured.

The yuan and yen, indeed, are based directly on the peso; their names, both meaning “round,” are a reflection of the parent currency's shape. The British introduced the Hong Kong dollar on the same model. Ringgit is an old Malay word meaning “jagged,” a reference to Spanish dollars’ serrated edges. Even the U.S. dollar was derived from the same coin, which was, in fact, legal tender until the mid-19th century.

The Manila Galleon: From Asia to the Americas and Back

The widespread adoption of the real de a ocho relied on a pair of economic and technological developments some century and a half apart. One was the rise of the trans-Pacific trade between Asia—predominantly but by no means exclusively China—and Spanish America via Manila. The Manila galleon, as both the ships and the trade were known, ran from 1565, just after the discovery of the “tornaviaje,” the route back from Asia to the Americas, and the founding of Manila in 1571, until 1815.

Silver was so central to the developments of this period that we have called the trans-Pacific trade route la ruta de la plata—a silver, rather than silk, road that ushered in what we now call globalization.

This trade route was crucial due to several factors. First, it stands to reason that without commerce, there is not much need for financial instruments. More importantly, this trade was distinguished not so much by what the Chinese supplied as what they would accept in return: silver, and only silver. Silver had formed the basis of the Chinese money supply since the mid-15th century, but China had few sources of silver of its own: in the end, it was silver from Spanish American mines that fueled the Chinese economy for more than two centuries.

The Spanish literally had a mountain of silver at Potosi, the world’s largest mine by far, found in 1545. It was not long after the opening of Potosi that Bartolomé de Medina developed in Mexico the method of mercury amalgamation, a considerably more efficient process to extract silver from the ore. With the uncovering in 1559 of the huge source of mercury at Huancavelica, near Potosi, the cost of silver to Spain became exceptionally low, and the Spanish Crown’s 1/5 (quinta) levy was substantial. The ensuing flood of silver resulted in global inflation. 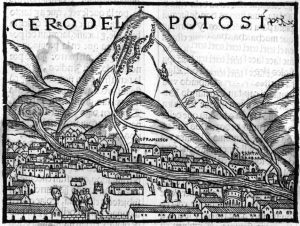 Silver was so central to the developments of this period that we have called the trans-Pacific trade route la ruta de la plata—a silver, rather than silk, road that ushered in what we now call globalization. Silver and the trade it engendered integrated China into the world economy; indeed, for the first time, one could talk of a “world economy.”

Spanish-American silver—from Potosi and later mainly from Mexican mines—was the vehicle through which the world’s financial systems began to integrate, something noted by Adam Smith in The Wealth of Nations. Not only did human actions have global scope for the first time, but economic effects now traveled the world with the speed of a single ocean crossing. A single cargo of silver lost to shipwreck could put China at risk of a dynasty-threatening money-supply shock.

More than a glimmering of today’s global financial markets can be seen in the arbitrage of the differing relative gold-silver values that pertained in China as opposed to Europe, an activity documented as early as the first decade of the 17th century, when profits from it were estimated at 75-80%. International arbitrage worked as one might expect: gold-silver rates converged.

Spanish coinage had long had a well-deserved reputation for standardized purity and weight, something the Crown took great pains to ensure. A second development resulted in further improvement: machine-made “milled” coinage with raised and serrated edges was introduced in 1732. The design of the edges incorporated deliberate anti-fraud features to prevent clipping and shaving, something all too possible with the previous hand-struck coinage. Not only had no other coinage the supply to meet demand, but now Spanish coins could also be largely accepted as they were.

China, curiously, seems not to have minted silver coins. Ingots, measured by the tael, varied in size and purity. Smaller transactions might use silver snipped off an ingot. This meant there was a constant need to assay and weigh the silver, making it a clumsy medium of exchange. As a result, Spanish milled dollars progressively competed with and replaced the tael: standardized coinage facilitated commerce. Many examples of these coins can be seen today with Chinese chops or assay marks. The Spanish real was a currency rather than merely silver.

Not only had no other coinage the supply to meet demand, but now Spanish coins could also be largely accepted as they were.

The Manila galleon came to an end in 1815 with the advent of the Mexican War of Independence. But the currency lived on in the Mexican “eagle” dollar: prices in China were regularly quoted in “dollars mex.” A continued commitment to the purity of the coinage meant that Mexican coins traded at significant premiums to their value as bullion, as well as to other coins. U.S. traders had to purchase Mexican dollars at a premium to their value in gold. Such was the demand that the Mexican government was able to levy a significant tax on their export. As today, there was a financial benefit to the country producing the most widely accepted currency.

The Mexican dollar saw off several competitors, including a U.S. trade dollar and the first Hong Kong dollars. The Hong Kong Mint, established in 1866 to produce Hong Kong dollars on the Mexican model, closed down two years . The machinery passed through Jardine Matheson to the Japanese, who used it to mint yen coins in 1870.

The story of our globalized world, and its globalized financial markets, begins not, as conventional wisdom often has it, with the Industrial Revolution, the British Empire, or the Bretton Woods institutions that arose after the Second World War, but rather in the Pacific with la ruta de la plata.

If, as some speculate, the Chinese yuan ends up replacing its cousin the U.S. dollar as the world’s reserve currency, then—in some ways—nothing very much will have changed.

When, after a reign of some three centuries, the Spanish/Mexican dollar finally, and gradually, passed the baton of global acceptance, it was to the U.S. dollar. Since these were in effect the same coin, it was—at the time—perhaps more a matter of labeling than anything very fundamental. The U.S. dollar has remained largely unchallenged since; only now do some observers see a possible role for the renminbi.

Given the renminbi’s crawling peg with the U.S. dollar—not unlike the “peg” between the U.S. dollar and its Hispano-Mexican predecessor—this development may also be gradual and non-portentous for global trade. In light of the family relationship between the American and Chinese currencies, if, as some speculate, the Chinese yuan ends up replacing its cousin the U.S. dollar as the world’s reserve currency, then—in some ways—nothing very much will have changed.

Peter Gordon and Juan José Morales are the authors of "The Silver Way: China, Spanish America and the Birth of Globalisation, 1565–1815" (Penguin, 2017). Morales is a former president of the Spanish Chamber of Commerce in Hong Kong; Gordon is the editor of the "Asian Review of Books."