Vaccine Valor: Making Something Out of Nothing with North Korea

On the eve of South Korean President Moon Jae-in’s first face-to-face meeting with new American leader Joe Biden in Washington on May 21, retired three-star US Air Force general and regional security expert Dan Leaf, who served as deputy commander of the US Pacific Command from 2005 to 2008, calls for the US to make a bold unilateral offer to send Covid-19 vaccines to North Korea. The aim: to reopen the doors to diplomacy and, in the long term, the denuclearization of the Korean Peninsula. 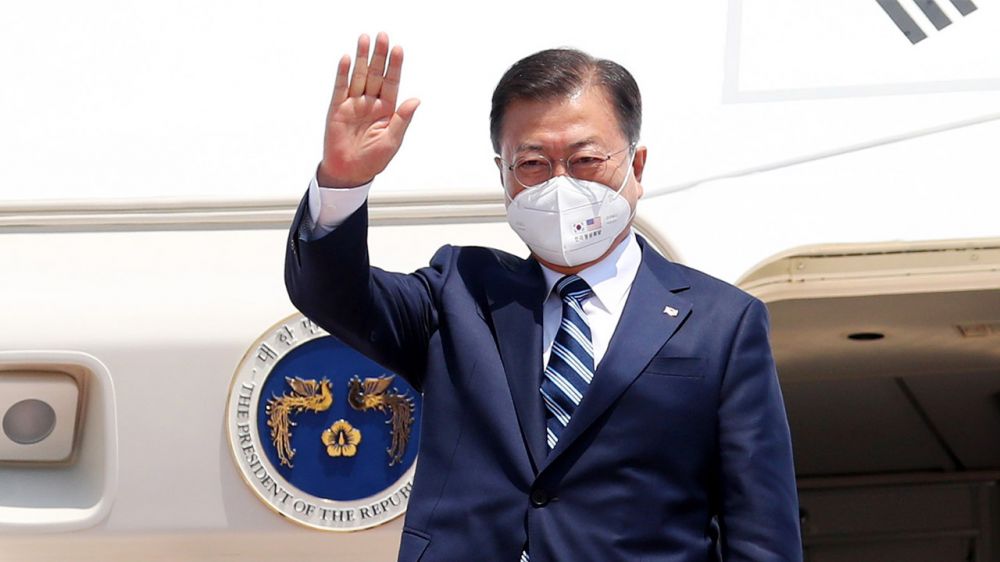 Moon mission: The South Korean president arrives in Washington on May 19 for his summit with US leader Joe Biden (Credit: Arirang News screenshot)

On May 21, 2021, President Joe Biden of the United States will host President Moon Jae-in of South Korea in Washington, DC. This is just the second summit of the Biden presidency, but it is unlikely to do more than reinforce the US-Republic of Korea (ROK) alliance. The two leaders come in with different perspectives – Moon is nearing the end of his presidency while Biden is beginning his. The South Korean’s priorities are more regional than his American counterpart’s global concerns. Both have interest in reducing tensions with North Korea, and President Moon has set restarting diplomacy with the Democratic People’s Republic of Korea (DPRK) as a priority for the summit. That will be difficult: Thus far, President Biden’s attempts to start a dialogue with North Korean leader Kim Jong-un have gone unanswered. The low expectations that nothing major will result will be met unless something bold – even radical – is proposed.

On May 17, President Biden announced that the US would provide 80 million doses of Covid-19 vaccine globally through COVAX, the Covid-19 Vaccines Global Access program of the World Health Organization (WHO). “This is the right thing to do”, Biden said – and he’s right. But he could be more right.

Using COVAX as the distribution conduit seems logical, but it is difficult not to be skeptical of that initiative and its WHO overseers, given their performance during the pandemic. Even China was initially reluctant to enter the WHO-led consortium, only joining in late 2020. Chinese vaccines are just entering the COVAX system in May after months of aggressive unilateral vaccine diplomacy around the world by Beijing.

The North Korean people need an effective vaccine. While the Kim regime has asserted that the country has no Covid-19 cases, those claims have been widely discredited and there is ample anecdotal evidence to the contrary. The economic effects of extreme measures taken by the state to control the virus, major floods in 2020, and a history of privation have the pushed the population to the brink of catastrophe. Despite the obvious need, a COVAX representative said in early May that impoverished North Korea was eligible for vaccine support but has not received shipments because of its lack of “technical preparedness” and global shortages but could take delivery in the second half of 2021. 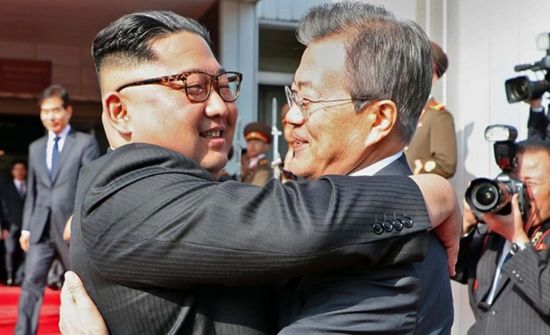 North-South hug, May 2018: The South Korean president's priority is restarting diplomacy with the DPRK and its leader Kim Jong-un (Credit: Cheong Wa Dae, The Republic of Korea)

At their summit, President Biden should suggest to his South Korean counterpart that the US unilaterally target distribution of excess vaccines to North Korea, home to one of the most vulnerable populations on the planet. This bold stroke could be an effective way to counter the virus while reducing regional and global tensions. Taking such action jointly with the ROK would be desirable but given South Korea’s internal politics and the challenges of reaching an agreement in tandem, the United States should go this alone.

Such radical action would require the Biden administration to think, and act, outside the box. What the president announced regarding vaccine sharing is understandably inside the limits of conventional thinking, but this is an opportunity to reinforce the role of the US as a global force for good by acting selflessly, in sharp contrast to China’s self-serving vaccine sharing.

The United States should boldly bypass COVAX and the WHO by offering direct and unconditional delivery of excess Covid-19 vaccines to North Korea in sufficient quantity to inoculate the entire population of approximately 26 million people. Executing such an endeavor would be no easy task. Kim and his regime would be understandably reluctant to accept US help. North Korean officials and citizens may also harbor some fear that the Americans might attempt to poison their people with tainted vaccine. The challenges of distribution would be myriad, and the effective administration of inoculations would be difficult to achieve. The potential benefits, however, would far outweigh all of these impediments.

The most likely outcome would be that Pyongyang would refuse Washington’s help. If so, the United States could move on to other beneficiaries, perhaps even through COVAX – at least the US would have tried to help the long-suffering citizens of the Hermit Kingdom. North Korea may put forward unacceptable conditions or concessions. Again, this would not be a desirable result but better than not making the effort. Such a refusal would bolster the human rights case against Kim Jong-un’s government and clearly illustrate its failure to fulfil their duties under the “responsibility to protect”, often referred to as R2P, a norm of international relations endorsed in 2005 by all members of the United Nations, including the DPRK.

Should Kim agree to receive the vaccine, it would take extraordinary effort to reassure him and his government that the vaccine was real – and safe. Using the North Korean delegation to the UN, the United States should ensure the total transparency of vaccine production and specific lot selection. This would likely require an unbroken chain of custody from production to delivery – an extraordinary, but necessary, effort. 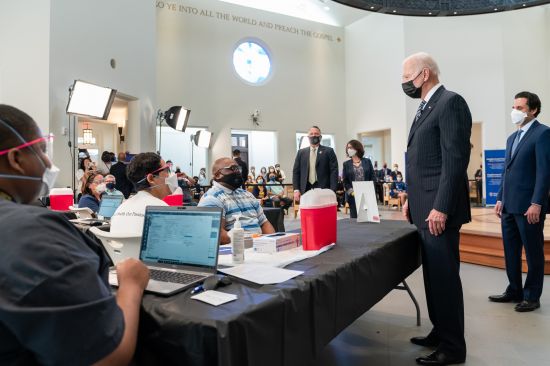 Delivery of the vaccines could be achieved by air, perhaps through a neutral third party such as Mongolia or Vietnam. Once in North Korean hands, the burden of distribution and administration would be squarely on the state’s shoulders. The odds of success would be quite low, but greater than zero. There is no doubt that Kim might skew distribution to benefit the Workers’ Party regime and the Korean People’s Army, as well as to reopen the North Korean economy. That is a risk worth taking; this unconditional assistance could be a tectonic shift in US-DPRK interaction, opening long-closed doors for diplomacy and, in the long term, denuclearization.

Is there any basis or precedent for contemplating such a “crazy” proposal? The US has in the past had other opportunities to do the right thing and change the dynamics of our relationship with North Korea. The DPRK suffered from massive flooding in August 2007. The devastation was so bad that the regime uncharacteristically appealed for international aid.

As deputy commander of US Pacific Command (PACOM, which in 2018 was renamed the Indo-Pacific Command, or INDOPACOM), I suggested offering an airdrop of humanitarian rations from American military cargo planes. Multiple populations, already deprived, had been completely isolated by the floods. Similar drops had been used to feed refugees in Iraq and Afghanistan, and earthquake victims in Pakistan. At the commander’s direction, PACOM prepared a proposal and submitted it to the US Secretary of Defense.

The premise of this initiative included had three components. First, such an airdrop could help alleviate a legitimate crisis when other forms of aid delivery were not feasible. Second, insofar as the DPRK had requested aid, any refusal of an unconditional relief effort would further demonstrate the regime’s unwillingness to address the needs of the North Korean people, contrary to the R2P principle. Finally, whether the aid had been accepted or not, the proposal would open a new avenue of dialogue between the United States and North Korea.

Then-secretary of defense Robert Gates warmed to the proposal and directed further planning by the Pacific Command team. Rations were available, as were C-17 cargo aircraft. The staff estimated that aid could be delivered to isolated areas of the DPRK within 60 hours of approval. Forwarded to the National Security Council for consideration, the proposal was still under review when the urgency of the situation abated, and the opportunity was lost.

The 2007 flooding is one of many cases that suggest that a DPRK collapse is unlikely, and that hoping for or expecting it is unrealistic. North Koreans rulers have demonstrated the ability to maintain control through economic and natural calamities, and the population of North Korea has shown remarkable resilience. Anticipation of collapse is more than unrealistic; it is a basis for the flawed strategy of hoping for major change while maintaining a very dangerous status quo. Collapse, whether from natural disaster or disease, would present enormous humanitarian challenges and put control of DPRK nuclear weapons in doubt. A serious outbreak of Covid-19 in North Korea could have the same effect.

Planning and implementing such a bold initiative would require consideration of so many factors. That would be the job of the US administration and its various departments. Providing vaccines to the people of North Korea would be a deft yet difficult ascent to the moral high ground, but for the United States, this would be a daring climb worth making.

Bergengruen, Vera. (June 1, 2018) “This Former US General Says The Only Way Forward With North Korea Is To Talk About The War”, BuzzFeed News, BuzzFeed Inc., New York, NY, USA. 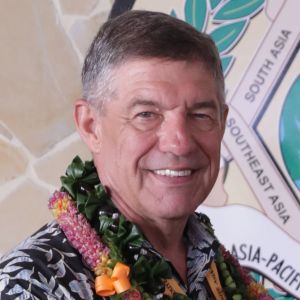 Dan Leaf is a retired three-star general and United States Air Force fighter pilot with air and land combat experience, He is the former deputy commander of the US Pacific Command and was the director of the US Department of Defense’s Daniel K Inouye Asia-Pacific Center for Security Studies. His essay, “An urgently practical approach to the Korean Peninsula”, won the Oslo Forum’s inaugural Peacewriter Prize in 2017.