Allies Not Out of America's Line of Fire

With the U.S.-China trade conflict worsening by the week, Australia, Japan, and India may see security ties as a chance to boost their status in Washington. But the Trump administration’s crusade on trade could very well engulf them, too. 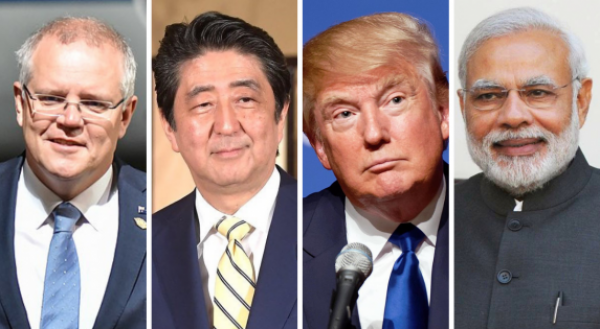 There is an old idea in retail: a shop should always have a loss leader, something flashy in the front that lures in passers-by. The U.S.’ China policy perhaps functions in a similar way. The downturn in U.S.-China relations has cast a long shadow over all conversations on international affairs.

U.S.-China relations have gone south faster than anyone could have predicted. The unravelling has dominated headlines. The past month alone has seen Chinese President Xi Jinping’s key economic advisor going to the U.S. for negotiations, the unveiling of two U.S. indictments against Chinese tech giant Huawei, and the release of a long list of U.S. conditions for cooling the trade war. Each of these actions on their own normally would be enough to capture media attention; that they’ve all come in the same month shows the sheer speed of change.

The hubbub has left U.S. allies thinking that they are well-placed to benefit from the rift, that U.S.-China competition will see their status in Washington increase. They are wrong.

On the American side, the downturn in U.S.-China relations is based on an alliance of interests between different groups in Washington that previously rarely played nicely with each other. Security hawks, for example, have long been keen to push back on what they see as Chinese expansionism. But in terms of trade, the U.S. experience with China has been broadly positive, economically and culturally. This time, however, China’s economic strategies, in particular Made in China 2025, and social environment under the Xi administration have turned the U.S. business community, media, and inside-the-beltway China watchers against China.

Yet, a convergence of interests on China does not mean that these groups will not rally hard for their respective policy positions vis-à-vis other nations. So while Washington may be taking a harder line against Beijing, it may soon turn on allies, too, as trade concerns subsume other worries. With all its headline-grabbing, the U.S.-China rivalry is distracting other nations from the very difficult choices they will soon have to make.

The problem is simple. At present, major U.S. foreign policy decisions are more often made by executive fiat and tweet than by negotiations between the White House and Congress. And given the constant turmoil in the Trump White House, and the more secure tenure of trade hawks, it is likely that they will be better able to push their interests onto the U.S. president.

While Washington may be taking a harder line against Beijing, it may soon turn on allies, too, as trade concerns subsume other worries.

Much of the belief that rising U.S.-China tensions will bring the U.S. closer to its allies is based on defense relations. While the U.S. may wish that Japan and Australia would do more heavy lifting around the region, it is undoubted that alliances with both countries are considered fundamental to U.S. security interests. Moreover, as former Indian ambassador Neelam Deo argues, “For the U.S., India is consequential … as a potential counterweight to the rise of a predatory China. Every day, the U.S. signals its desire for a closer relationship with India.”

Economic nationalists, however, view with suspicion any nation currently running a trade surplus with the U.S. Last year, then-U.S. Secretary of Defense Jim Mattis reportedly pushed hard for sanctions not to be imposed on European and Japanese steel and aluminum, for security reasons. With Mattis abdicating his role for a “Secretary of Defense whose views are better aligned” with Trump’s, it is hard not to foresee the Trump administration imposing tariffs on a wider range of products and materials in the near future, without regard for security partnerships.

This dynamic affects each of the U.S.’ major defense allies differently. Australia, for example, managed to secure an exemption on aluminum tariffs. The country has two major advantages over India and Japan. Firstly, it is currently running a significant trade deficit with the U.S., whereas the other two have growing trade surpluses. Secondly, it seems to have greater salience in the White House than its economic clout would suggest. India and Japan are larger economies, and more significant trading partners of the U.S. Yet, Asia Global Institute analysis of White House press releases for the year ending June 2018, for instance, shows that China is mentioned 317 times, Japan 127 times, Australia 52 times, and India 43 times. That Australia is mentioned more than India is unusual given India’s growing strategic and economic weight.

Another part of the issue for Japan and India is that, unlike Australia, both are rapidly changing their foreign policy, and both need U.S. support.

In Japan, for example, recently re-elected Prime Minister Shinzo Abe outlined a “total reassessment of Japan’s postwar diplomacy.” Speaking in his 2019 New Year’s address, Abe stated that Japan faces “immense challenges on the diplomatic front.” A U.S.-China trade war would be terrible for Japan’s economy. A former Bank of Japan advisor recently predicted that such a war could hit world trade by up to 2% and reduce Japan’s gross domestic product by 0.6%.

Abe has thus far successfully kept Japanese agriculture out of the fray of trade wrangling. But that is largely through keeping a low profile, and making U.S.-Japan negotiations superficial dignitary diplomacy. But his “reassessment” of Japan’s foreign policy this year is based on his assumption that 2019 “will truly be a year in which Japan shines on the world’s center stage.” And Japan beaming out relies on America showing up. As chair of the G20, Japan will welcome Trump, Xi, and other top leaders from around the world to Osaka in 2019. Any diminishment of its status in the multilateral order, such as a snubbing at the G20, will dull Japan’s luster.

Another part of the issue for Japan and India is that, unlike Australia, both are rapidly changing their foreign policy, and both need U.S. support.

At the same time, former top diplomat and influential foreign policy commentator Hitoshi Tanaka thinks that the rivalry between the U.S. and China has “enhanced Japan’s presence in Asia.” This, he believes, may be the “big opportunity for Japan’s diplomacy.”

To maximize diplomatic opportunities, Japan will need to avoid fighting with the U.S. over trade. But it runs a persistent trade surplus with the U.S. And Japan’s protectionist instincts on trade also run deep. No matter how much the two countries’ defense and other interests align, these trade interests are likely to collide.

India is similarly squeezed. Having sat neatly beside major powers for 70-odd years, India is able to juggle its interests. Take for example the recent G20, where Prime Minister Narendra Modi met with Abe and Trump, and then met with Xi and Russian President Vladimir Putin for the Russia-China-India Forum immediately after.

But, as Foreign Secretary Vijay Gokhale recently argued, India has moved past “non-alignment” as its driving force in foreign relations. Rather, “the most diverse country on Earth” must seek to maintain a “strategic autonomy policy.” This requires multilateral agreement. Gokhale wants India to have more “rule-forming partnerships” like the G20 and Indo-Pacific.

Modi, for his part, argues that climate change and a failure to embrace globalization are two of the three greatest threats to world peace. This idea is not aligned with current U.S. policy, to say the least. Also, trade relations remain a sticking point. At present, U.S.-India trade disputes are contained to the World Trade Organization. Should any of them spill over into the more direct imposition of tariffs, then India may become, from an American perspective, less of a faithful strategic ally.

The downturn in U.S.-China relations could be seen as advantageous to Australia, Japan, and India. Rising tensions mean that each nation will appear to be a more attractive security partner for the U.S. But security alignment is not the same as foreign policy alignment. Loss leaders can just become, well, losses.

Ryan Manuel is the associate professor of practice of the Asia Global Institute. His most recent work is a book called "How to Rule China." He was previously a senior China analyst with the Australian government and a management consultant with the Boston Consulting Group.