Many maritime disputes are motivated by material factors like oil, gas, and fishing stocks. Weaker countries tend to insist on sovereignty claims, at the risk of stretching legal definitions, while those with access to resources are inclined to maintain the status quo. The Timor-Leste-Australia dispute shows how sovereign claims risk weakening the international sea regime. 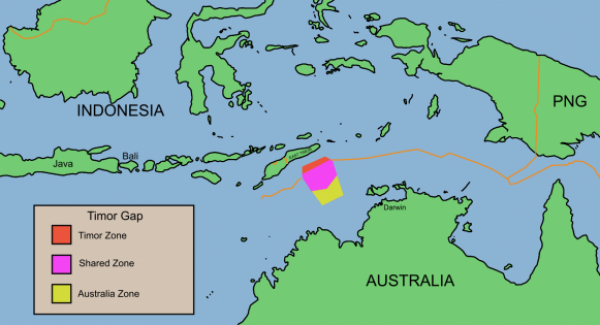 The dispute between Australia and Timor-Leste provides an interesting example of how different states view maritime entitlements and the relationship between sea and sovereignty. This long-running dispute was fundamentally over maritime boundary delimitation in the Timor Sea and the development and resource-sharing of oil and gas deposits. Timor-Leste linked maritime boundaries to its sovereign identity, equating sea area with land territory in a process of “maritime territorialization.” In contrast, Australia did not view incomplete maritime boundaries as meaningful to its capacity to act and identify as a fully sovereign actor.

Sovereignty and the Sea

The hallmark of modern sovereign states is exclusive sovereignty over defined territory. According to the 1933 Montevideo Convention on the Rights and Duties of States, a state possesses the following qualities: a permanent population; a defined territory (i.e. land); government; and capacity to enter into relations with other states.[^1] Maritime space, however, beyond the three-nautical-mile (nm) “cannon-shot rule,” was long regarded as a global commons.

Over time, new normative frameworks have increasingly superseded the concept of freedom of the seas. The United Nations Convention on the Law of the Sea (UNCLOS), completed in 1982, introduced a regime that provided new incentives for states to extend the concept of sovereignty seawards. It brought about new disputes on overlapping jurisdictions and radically transformed and complicated boundary negotiations and entitlements.

Increasingly, sovereign rights in these differentiated zones are becoming conflated with sovereignty.

The Timor Sea dispute did not involve “territory” as traditionally conceived, such as rocks in the case of the South China and East China Seas. This dispute refers to both continental shelf and exclusive economic zone entitlements. In Timor-Leste’s public diplomacy, this purported sea “territory” became increasingly linked to and conflated with state sovereignty.

Both Australia and Timor-Leste claimed a sea area referred to as the Timor Gap. The Gap came to be when Australia and Indonesia signed treaties in 1971 and 1972 that created two boundaries between their coastlines. At the time, eastern Timor was occupied by Portugal, which refused to participate in delimitation. Throughout the negotiations with Indonesia, Australia’s position was that the Timor Trough—a 3500-meter trench 40 nautical miles from the coastline of Timor-Leste—was the dividing line between two continental shelves.

In this pre-UNCLOS period, the 1958 Continental Shelf Treaty supported Australia’s position. Canberra continued to argue that the principle of “natural prolongation” dictated that any maritime boundary should be drawn much closer to Timor-Leste’s coastline in line with a purported continental shelf after Timor-Leste’s independence referendum. Timor-Leste, on the other hand, argued that a median line should be drawn between the two states, reflecting contemporary maritime law under UNCLOS.

Yet, Australia removed itself from the compulsory jurisdiction of the International Court of Justice and International Tribunal for the Law of the Sea relating to maritime boundary delimitation, three months before Timor-Leste became independent. This meant that Timor-Leste could not take Australia to an international court to resolve the maritime boundary issue. Following the formation of a 2006 treaty known as Certain Maritime Arrangements in the Timor Sea (CMATS)—which placed a moratorium on boundary delimitation for 50 years—Australia refused to re-enter boundary negotiations, stating its preference for maintaining existing treaty arrangements.

Timor-Leste then began a public diplomacy campaign to pressure Australia to abandon CMATS. There were three key strands to these sovereignty discourses. The first propagated the notion that Timor-Leste “owns” the maritime territory and resources in the Timor Sea. Popular narratives cast Australia as a thief “stealing” Timor-Leste’s oil and maritime territory. In contrast, Timor-Leste was positioned as a victim unfairly denied its sovereign entitlements.

The second narrative strand was that Timor-Leste’s sovereignty was incomplete and full independence denied due to the absence of maritime boundaries.

The third strand used the historical legacy of East Timor’s 24-year independence movement against Indonesia as a way of presenting Australia as the “occupier” of maritime territory that rightfully belongs to Timor-Leste under international law, again equating sea area with land that can be occupied.

Canberra rejected Timor-Leste’s argument that the absence of maritime boundaries impedes the completion of Australian sovereignty in its attempt to neutralize the values-based discourse. For Australia this was not about sovereignty; its interest was in maintaining its stake in the lucrative oil and gas deposits in the Timor Sea, which it viewed as being better served by delaying maritime boundary delimitation.

Actual Sovereignty Cannot Be Separated from Economic and Political Interests

In March 2018, Australia and Timor-Leste signed a maritime boundary treaty. While this was presented as a victory for Timor-Leste, Australia maintained its interest in the potentially lucrative Greater Sunrise complex of natural gas and condensate fields, as this continues to be a shared regime. The two countries also decided on a revenue split: 70:30 in Timor-Leste’s favor if Dili does not win the right to pipe the oil to its coastline, 80:20 if it does.

This is because Timor-Leste’s maritime boundaries are neither completely nor firmly established. The eastern lateral that splits Greater Sunrise only comes into effect after Greater Sunrise resources are depleted. Additionally, the treaty allows for the adjustment of lateral boundary lines in the future, subject to a future maritime boundary agreement between Timor-Leste and Indonesia. Problematically, while the Compulsory Conciliation helped resolve the symbolic sovereignty aspect of the dispute, it did not resolve the issue of how the lucrative gas resources of the Greater Sunrise field will be developed. In October 2018, it was announced that Timor-Leste had bought out ConocoPhillips’ 30% share of the joint venture for A$484 million in an effort to persuade the other partners to build the pipeline to its south coast. These negotiations remain ongoing, and Timor-Leste’s development plan is still not assured.

While the Compulsory Conciliation helped resolve the symbolic sovereignty aspect of the dispute, it did not resolve the issue of how the lucrative gas resources will be developed.

The biggest strength of the Compulsory Conciliation was in providing the parties opportunities to find alternative ways of conceiving the problem and possible solutions. Fundamentally, the utility of conciliation efforts to help states arrive at negotiated solutions depends upon their economic and political interests, and how invested parties are in resolving the dispute. Yet, on the substantive material issues of developing Greater Sunrise, the UNCC was unable to break the impasse. It is this issue of how to develop Greater Sunrise that is the most substantial concern for Timor-Leste’s actual sovereignty; that is, its capacity to operate as an independent state.

[^2] United Nations Convention on the Law of the Sea, parts I, V.

Rebecca Strating is a lecturer in politics and international relations at La Trobe University, Australia. She teaches and researches in Australian Politics and Foreign Policy, International Relations in East Asia, and maritime disputes.