Rise of East Asia in the Global Innovation Index

With their focus on economic development through innovation, the countries of East Asia are rising quickly through the ranks of the Global Innovation Index. These countries are not merely growing individually—they are growing with one another.

What makes a country innovative? One of the many ways to delve into this question is via the Global Innovation Index (GII) report, which I co-edit every year. The report ranks the innovation performance of more than 120 economies around the world. The project was launched in 2007 with the goal of determining metrics and approaches that better capture the richness of innovation in societies while going beyond traditional measures of innovation.

There were a number of incentives for setting this goal. First, innovation is an important element driving economic progress and competitiveness in both developed and developing economies. Second, the definition of innovation has expanded to go beyond conventional definitions associated with science and technology. Innovation has become more horizontal in nature, including new aspects such as social innovations and business model innovations. Lastly, innovation represents inspiration for many people, especially for the next generations of entrepreneurs and innovators.

Innovation has become more horizontal in nature, including new aspects such as social innovations and business model innovations.

The GII provides a key tool with detailed metrics to measure innovation. A country’s overall score on the GII model is calculated as an average of a set of inputs (enablers for innovation) and a corresponding set of outputs (measures of innovation success). Of course, it is important to acknowledge that a country’s ranking reflects its relative positioning on the basis of the conceptual GII model, the data available, and the sample of economies considered each year. Thus, caution should be exercised in interpreting the scores. More details on the GII model and its constituent indicators can be found on the GII website. 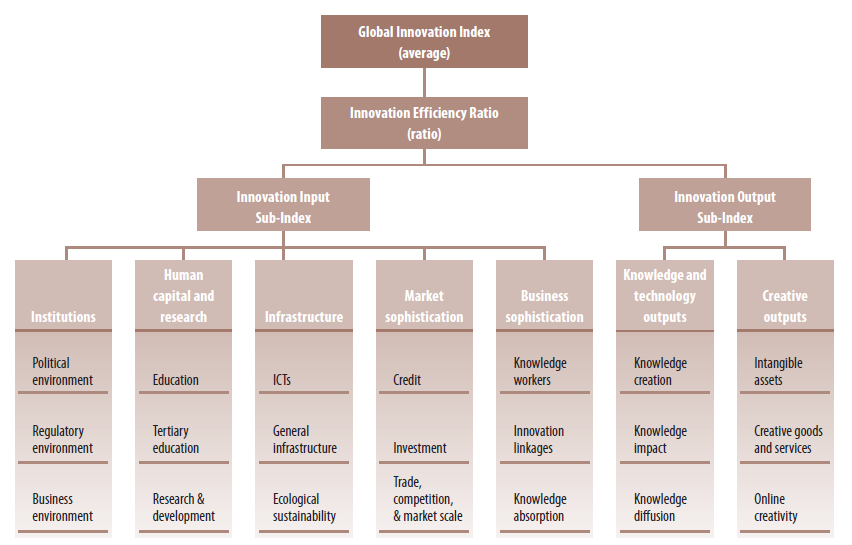 Framework of the Global Innovation Index 2017

East Asia as a region is becoming an important engine of innovation. Many East Asian countries are ranked within the top 25 in the 2017 GII: Singapore (7th), South Korea (11th), Japan (14th), Hong Kong (China) (16th), and China (22nd). Building upon and alongside innovation efforts in high-income economies in other regions (mainly North America and Europe), countries like South Korea, Japan, and China are now taking the lead among those fostering global economic development through innovation.

Singapore holds the top rank in East Asia and has been consistently ranked in the top 10 in the GII on the basis of strong performance in many dimensions. The city-state ranks first amongst all nations considered in the GII in FDI net outflows, government effectiveness, regulatory quality, cost of redundancy dismissal, PISA scales, tertiary inbound mobility, ease of protecting minority investors, applied tariff rate, and IP payments.

Surprisingly, Singapore’s position in education is relatively weak, as it ranks 76th overall. In this arena, Singapore does not perform very well in any indicators except PISA results. There is also room for improvement in growth rate of GDP per worker, ICT services exports, and trademarks and industrial designs by origin.

South Korea’s position has been improving over the last several years and the country is ranked 11th in the 2017 GII. One of its greatest strengths is knowledge creation (ranked 2nd overall), where it maintains its top rankings in patents by origin, PCT patent applications, and utility models by origin.

South Korea has also performed impressively in human capital and research (2nd overall): it is in 1st place in research and development, and 2nd and 3rd in GERD performed by business and GERD financed by business, respectively. The country’s areas of relative weakness include ICT services exports, printing and publishing manufactures, tertiary inbound mobility, GDP per unit of energy use, knowledge-intensive employment, and FDI inflows.

Over the last four years, Japan has also moved up the GII rankings. It has now reached 14th place in the overall GII ranking. In three important dimensions, Japan ranks in the top five: research and development (3rd), information and communication technologies (5th), and trade, competition, and market scale (3rd).

Japan is also 1st in a number of important indicators, including GERD financed by business, patent families in two or more offices, patents by origin, and PCT patent applications. Areas for further improvement include growth rate of GDP per worker and cultural and creative services exports.

In recent years, China has displayed an upward trajectory in the GII.[^1] In 2016, it helped close the gap between high-income and middle-income countries when it placed 25th and became part of the top innovation economies in the GII. Coming in at 22nd, China has kept its momentum in 2017, retaining the top position among middle-income economies.

China has achieved relative balance between the three components of the quality index, ranking 4th in universities, 14th in citable documents, and 29th in patent families among all countries.

The efforts of other economies in the region are also evident. Countries like Indonesia, the Philippines, and Vietnam are actively striving to improve in innovation, progressively joining not only regional high-tech value chains but also other activities such as ICT offshoring.

Malaysia, Thailand, and Cambodia are also keen to improve their innovation performance. In particular, Malaysia has top cluster development and ICT use, Thailand is ahead in quality of publications and trademarks, and Cambodia, which only recently began focusing on innovation activities, benefits from high FDI inflows.

A stronger and more developed regional innovation network is also beginning to emerge as China, Japan, and South Korea move some of their manufacturing activities to neighboring countries in the region. These activities—which include many in technology-intensive sectors—are leading to more sophisticated regional production and innovation networks.

East Asia’s strength in innovation will continue to grow, and the region is poised to have more positive influence on global innovation in the coming years.

More and more countries in the region are also going beyond simply incentivizing research. They are focusing on improving framework conditions for innovation―such as the business environment, access to finance, competition, and trade openness, strengthening the links among innovation actors and promoting entrepreneurial local cultures. Thus, East Asia’s strength in innovation will continue to grow, and the region is poised to have more positive influence on global innovation in the coming years.

The GII is helping to improve and expand local networks and mechanisms for data collection and data reporting in the region. Collaboration across institutions creates a cycle that further improves data quality―by capturing more accurately the performance of local systems of innovation―and assures that the design of local policies is based on the most pertinent information available.

[^1] While year-on-year changes in the GII, which are influenced by methodological changes and data updates, are also factors behind this movement, China’s rise in the GII rank is consistent with the fast growth of China’s innovation economy. These factors affect all countries included in the GII.

Soumitra Dutta is the dean of the Cornell SC Johnson College of Business and the chairman of the Association to Advance Collegiate Schools of Business.