The Power of Three: How US-China-Japan Dynamics Shape Asia Pacific

The relationships among the United States, China and Japan have emerged as the world’s most important trilateral network. China’s political system and ideology are unlikely to converge with those of the US and Japan, which means mutual distrust will remain for the long term. But with the strong and assured leadership of Prime Minister Abe, Japan could be the lynchpin the keeps US-China relations from going off the rails, writes Yoshikazu Kato, Adjunct Associate Professor at the Asia Global Institute, The University of Hong Kong. 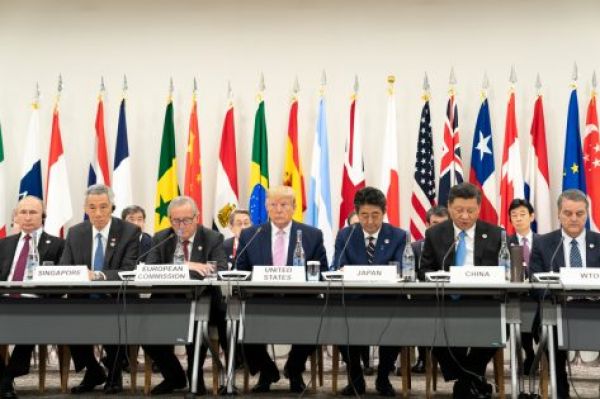 Abe(fifth from left) flanked by Trump and Xi at the G20 Summit in Osaka: Could Japan's leadership keep US-China relations from boiling over? (Credit: The White House/Shealah Craighead)

Japanese Prime Minister Shinzo Abe, as the host of G20 Summit in Osaka, sat between US President Donald Trump and Chinese President Xi Jinping, trying to “mediate” the differences, even conflicts, over the future of the global digital economy. During the Summit, Abe met with Trump and Xi respectively to help improve the relationships between the two major powers. The Japanese leader tried to provide the platform for Trump and Xi to calm down the trade war which has made all the G20 leaders and executives of international organizations nervous about a worldwide economic downturn.

Because of these efforts, Trump and Xi agreed to resume the US-China trade dialogue. Trump promised that the US would not impose additional tariffs on Chinese goods and would allow American firms to sell products again to China’s telecoms giant Huawei. Abe would see this as an instance where Japan played a constructive role in US-China-Japan trilateral relations, highlighting the importance of what could be described as the most important relationship framework in the Indo-Pacific region.

The impact of the three powers and their interconnectedness is not only economic. In terms of geo-politics, military and soft power, the capability to “influence”, values or ideological systems, development models, and regional and global initiatives, China, Japan and the U.S. have the  most significant and consequential relations for the Asia Pacific.

For future developments, the most uncertain indicator in the long run will be the rise of China. Whether China can sustain its development under “socialism with Chinese characteristics” will be widely watched in the 21st century. China’s political system and ideology are highly unlikely to converge with the US and Japan, unless some domestic turbulence which triggers a “regime change” occurs in China. In this sense, mutual distrust between China and the US-Japan side will remain a long-term issue.

This mutual distrust, resulting from the divergence in the values systems of the two sides, will complicate the strategic and geo-political struggles within the trilateral relations. China, under Xi’s leadership, will continue to expand its power and influence beyond its borders and will vigorously protect its own “core interests”. This may inevitably create an uncertain, even dangerous, confrontation with the US-Japan alliance. In this respect, the most uncertain and dangerous risk lies in the Taiwan Strait.

US power and intention based on its national interests and strategy will be crucial for countering uncertainties stemming from the rise of China. Recent US reluctance and inward-looking policies on free trade, multilateralism, and rules- and value-based institutionalism have raised challenges for the future course of international relations. Under Trump and Xi, the US and China appear to have entered an era of “strategic competition”. The trade war is just the tip of the iceberg. What the war has really revealed is that more than trade and economics, this is part of a century-long competition about national power and pride.

Japan will continue to be a status-quo power. US-Japan relations are relatively stable as they are longstanding security allies which have shared strategic interests. Trump’s inward-looking trade and external policies have embarrassed Japan; however, the US’s reluctance to engage in the region is now providing Japan with new opportunities to exercise more leadership, as well as pursue more comprehensive and proactive economic and security policies in the Asia Pacific region. Still, Japan’s near-to-mid-term goal is to push the US back to pursue the “Asia Rebalancing” or “Asia Pivot” policy of the administration of former president Barack Obama and secretary of state Hillary Clinton.

China, on the other hand, wants to co-opt Japan to counterbalance the presence and influence of the US in the Asia Pacific region. The Chinese government explicitly advertised the achievement of Xi’s first visit to Japan and the successful meeting with Abe during the G20 Summit. Although there are still difficult issues, such as perceptions of history and territorial disputes, Japan and China are now trying to upgrade their level of cooperation, particularly in economic areas. This is partly because of China’s frustrations with its relations with the US and partly due to Japan’s need and desire to boost its business and economy by strengthening the political relationship with China.

China has continued to claim aggressively its sovereignty in the South China Sea area and to build related infrastructure, including “artificial islands”, to assert its territorial control.  The US and Japan, on the other hand, have defined China’s expansive actions as unilateral coercive attempts to alter the status quo in the East China Sea and the South China Sea. This situation will last unless China’s expansive policies stop or slow down due to some domestic crises, such as an economic recession, political turbulence and so on.

On the Taiwan Strait, the US and Japan continue to define Taiwan as a security and strategic partner in protecting the security, order and democratic values in the Asia Pacific region. Under Xi, China has expressed eagerness to “resolve” the Taiwan issue. In his latest speech, Xi emphasized that “our country must be unified”. If Taiwan should take any moves to seek independence, China is very likely to take military action.

On the Korean Peninsula issue, all stakeholders share the goal of “denuclearization of the peninsula”. Given the recent meetings between Trump and Kim Jong-un, as well as those between Xi and Kim, North Korea may be ready to denuclearize. But it is not clear what the concrete procedures should be and there is a huge gap between the strategic interests of the US and North Korea and between those of Washington and Beijing, which is playing a crucial role through its alliance with Pyongyang.

China’s primary strategic interests on the peninsula are assuring peace and stability. China would be particularly upset with political turbulence in North Korea because it would threaten China’s national security, especially in its northeast area which shares a 1,400-km border with North Korea. That is why China opposes any unilateral measures which might incite Kim Jong-un to take extreme action and is willing to participate in economic sanctions against Pyongyang only within the limited scope of the United Nations framework.

To push the North’s leader to abandon his nuclear and missile capabilities and equipment, the US needs help from China, as Trump has repeatedly told Xi. To protect homeland security from the North’s nuclear threats seems to have become a common interest and concern for China and the US. Japan shares the same interests. To push North Korea to denuclearize, Japan should work together with the US and China. Japan should also begin a dialogue with North Korea that can eventually lead to a summit between Abe and Kim.

The rules- and value-based institutional mechanism with the highest standards in the Asia Pacific region had been the Trans-Pacific Partnership (TPP). Since the United States withdrew from the initiative, it was revised and relaunched as the Comprehensive and Progressive Agreement for Trans-Pacific Partnership (CPTPP), which has been in force since January 2019 in the first seven of the eleven signatory countries. The agreement is a modern, progressive trade arrangement that promotes liberalization and facilitation of trade in goods, services and investment, and establishing new rules in a wide range of areas.

Another framework for regional integration in the Asia Pacific region is the Regional Comprehensive Economic Partnership (RCEP). While not as ambitious as the CPTPP in the scope of its liberalization measures, once concluded, RCEP would encompass the ten ASEAN member countries and six key dialogue partners of the organization (Japan, China, South Korea, India, Australia and New Zealand), with the combined GDP of the 16 participating nations amounting to about 30% of world GDP and trade.

Japan is the only country among the three powers which has participated in both negotiations. In the wake of the G20 Osaka Summit, with Prime Minister Abe in a strong political position at home and in good standing in the region and globally, Japan will likely see a strategic opening to make a strong and positive commitment to regional peace and prosperity. The 2020 Olympics in Tokyo will keep Japan in the global spotlight. The question is whether Tokyo, riding on the PM’s strong and assured leadership, can be the lynchpin that could keep Washington and Beijing focused on sorting out their differences and prevent US-China relations from boiling over.

This article is adapted from the AsiaGlobal Working Paper “US-Japan-China Trilateral Relations: How their dynamics will shape Asia Pacific”. The full paper is available here, while an abridged version is available here.

McGregor, Richard. (2017) Asia’s Reckoning: China, Japan and the Fate of US Power in the Pacific Century, Viking.