The Palace and the Harbor

As fair trade and corporate social responsibility (CSR) gain traction as responses to a perceived neglect of ethics in business today, a look back at Asia-Europe exchanges in the early modern era reminds us that trade has always been a moral endeavor. 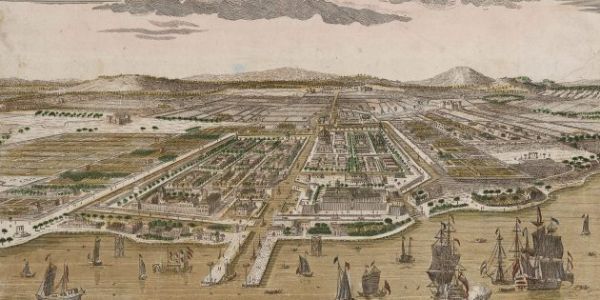 Instances of contact between distant societies during the 16th and 17th centuries often form part of the “great narrative” of the “Westernization of the world.” The resilience of such names as “Spanish Americas” and “Portuguese Asia” reflects the powerful hold imperialist mythologies still have on historians, despite their best efforts in resisting this “great narrative.”

However, we know today that the arrival of Europeans in Asia was neither coordinated nor cataclysmic in scale. The “Portuguese State of India” that Afonso d’Albuquerque established in fits and starts through the conquests of Goa (1510) and Malacca (1511) was never a massive imperial dominion. It was, at most, a loose and weakly militarized network of camps and fortresses established at the margins of strong local political societies with which the Portuguese, unable to overcome the local armies, had to accord.

Since the 14th century, [the Indian Ocean] had been home to a vast array of trade and pilgrimage routes carrying impressive quantities of goods, people, and ideas from the Arabian Peninsula to the Java Sea.

Sanjay Subrahmanyam noted that the world of the Indian Ocean that the Portuguese penetrated in 1498 was by no means a virgin space: it was the most densely interconnected area of the early modern era. Since the 14th century, that area had been home to a vast array of trade and pilgrimage routes carrying impressive quantities of goods, people, and ideas from the Arabian Peninsula to the Java Sea. The intrusion of the Portuguese into this civilized world of trade and exchange was, admittedly, accompanied by thundering muskets, but it took place in the interstices, in an almost parasitic way, as the new arrivals, rather than reconfiguring the pre-existing order, eased their way into it and adopted its rules and contours.

The Moral Rules of Trade

Discussions of “global” economic history often fall flat because of the anachronistic nature of their categorizations; they do not take into consideration the spiritual dimension that economic exchanges used to possess. These discussions draw an artificially straight line from the 16th century to the present day, evaluating all trade exchanges according to the arithmetic logic of a cost-benefit analysis. However, even if we admitted that the homo economicus model were pertinent to the way we describe our daily behavior, it is a fact that the men and women of the 16th century were not our ideological neighbors. Instead of having a “self” to develop and scrutinize, they had a soul to preserve from damnation.

Because it combined easy profit and transacting with Unfaithfuls, trade with Asia was a high-risk activity, spiritually. In the United Provinces, before the ships even left the piers, sailors sang songs warning against ill-gotten gains. Asian treasures—silks, spices, porcelains, and other “curiosities”—became synonymous with spiritual peril.

There was even an entire literary genre of moral exhortations aimed at sailors. Adam Westerman’s Christian Art of Navigation (1611) and Godefridus Cornelisz Udemans’s Spiritual Compass (1617) primarily pilloried “moral debauchery” and gambling, but one could also find warnings against the lure of easy earnings, as the temptation was high when faced with rubies from Pegu (Burma) and diamonds from Banjarmasin (Borneo). Of course, prescription and practice are two different things, and sailors were far from docile lambs. Still, these spiritual rules represented the norm, regardless of how often deviations occurred in actuality.

It is a fact that the men and women of the 16th century were not our ideological neighbors. Instead of having a “self” to develop and scrutinize, they had a soul to preserve from damnation.

The Catholic orders’ confession manuals also took great care to remind the Portuguese merchants in Asia that the search for a “fair price” must be based upon respect, by all parties, for a superior obligation of civility: the salvation or dishonor of either party must not be at stake.

In a leaflet written in 1600, the Jesuit Manuel de Carvalho denounced the “avid and disorderly appetites” of the traders, then deplored the “injustices in the purchase of the spices [of the Javanese].” These misappropriations undermined the royal treasury as well as Christian morality. Carvalho concluded with a vibrant and unusual plea for the Javanese’s freedom of navigation and trade. He went as far as recommending to repeal the monopoly held by the captain of Malacca on “first-hand” purchases and to “allow the Javanese full freedom [to travel and trade].”

A Shared Disdain for Profit

It is interesting to note that the Dutch’s main interlocutors in Asia—aristocrats in Javanese city-states and in sultanates on the borders of the Malay world—share a common suspicion of and disdain for trading activities as soon as these are guided only by a quest for individual profit. The severe Koranic condemnation of usury parallels west-European scholastic doctrines; pawnbroking and loaning money with interest were considered indicators of serious sin. Moreover, noble classes in the Java and Sumatra sultanates deeply disliked amoral merchants. A manual of decorum composed for King Paku Buwana IV of Surakarta, entitled Serat Wulangreh, classified merchants in the same category as opium addicts, “unrepentant gamblers,” and criminals, because they all share a common “lack of moral constitution.”

In the Javanese, Dutch, Malay, and Iberian worlds, the commercial transaction constituted a critical moment in social and spiritual life. If conducted outside accepted norms or without compassion and charity, it led to sin and dishonor. We know how much the passion of honor inhabited early modern European societies, from the top to the bottom of statutes and occupations.

In the Malay world, the concern with a “good name” (nama yang baik), in the sense of a good reputation, was very acute. In one of the most widely-known epic sagas in Malay literature, Hikayat Hang Tuah, composed in the 1750s, the queen of Bintan Island gives one of her sons, Prince Sang Maniaka, the following lesson: “Be neither arrogant, nor inclined to resentment, because even if this world is transitory, good reputation survives death.”

Hostility and misunderstandings were born of the actually banal chasm between the uncouth world of the harbor and that, mannered, of the palace.

In these conditions, the first instances of contact between merchants from Europe and noblemen from Southeast Asia cannot be apprehended merely through the mechanical effects of an abstract and universal “market logic.” One must also read in them ordeals testing statuses guided by strong conceptions of salvation and honor, in distinct but surprisingly analogous ways. The chaotic course of events and the deadly end of the first interactions between the Dutch, the Malay, and the Javanese did not represent a clash between incommensurable cultures, but rather a confrontation of conditions rendered possible—most paradoxically—by the relative similarity of the worlds thus connected.

In Insulindia at the turn of the 17th century, “Europe” did not encounter “Asia”: small groups of Dutch and British merchants and sailors who knew nothing of palatine rituals interacted with Malay and Javanese aristocrats who had an inclination for decorum. Hostility and misunderstandings were born of the actually banal chasm between the uncouth world of the harbor and that, mannered, of the palace.

Situations of contact of the “first globalization” didn’t signal, in and of themselves, the “first signs” of the market, nor the “beginning” of global free trade. What an ethnographic examination of these situations of contact reveals is the temporal, not spatial, dimension of the strangeness it highlights. Insulindia was not more or less “strange” than Northern Europe, but both of them inhabited a period that has become most unfamiliar to us. That unique moment at the turn of the 17th century—when the modern separation of the mystical and the political, and of trade and morality, had not yet been established—does constitute something “foreign.” The past, in this sense, is never only our history. It is also, and above all, what we have not become: a continent of forgotten possibilities, nevertheless once lived; the understanding of which highlights the arbitrariness of our obviousness.

This article was adapted and translated from French by Séverine Arsène from a longer version published in Esprit, no. 400, in December 2013.

Centre for International Research and Studies