The Almaty Spirit – Pathway to a Chinese Monroe Doctrine?

China has ambitions to transform the little-known Conference on Interaction and Confidence-Building Measures in Asia, or CICA, into a platform for a diffuse and cooperative security architecture for Asia. But, asks Nicola P Contessi of the York Centre for Asian Research at Canada’s York University, could these plans be a way for China to position itself as a regional hegemon and sideline the United States? 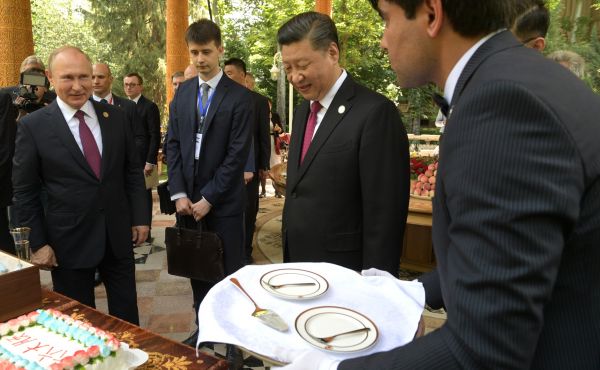 Can China bake its regional-security cake and eat it too?: Russian President Vladimir Putin offers birthday greetings to Chinese leader Xi Jinping before the CICA plenary session in Dushanbe, June 15, 2019: (Credit: Official Internet Resources of the President of Russia)

With the liberal international system under stress as the US retreats from multilateralism, China is spearheading a push for a new regional order in Asia centered on the Conference on Interaction and Confidence-Building Measures in Asia (CICA). The organization, which was launched in 1992, held its fifth summit in June 2019 in Dushanbe, Tajikistan. The gathering of this little-known grouping of 27 member states from Central, North, South and Southeast Asia was a typically low-key affair. But it ended with the same call for a new regional security architecture that Chinese President Xi Jinping made when he hosted the body’s fourth summit in 2014. Both events included discussions of a future regional order in Asia, which security experts in the West inferred would entail sidelining the US.

CICA’s chair between 2014 and 2018, Beijing has sought to revamp the organization into the cornerstone of such a new regional order. Headquartered in Kazakhstan's capital Nur-Sultan (known previously as Astana), the CICA is the brainchild of Nursultan Nazarbayev, who was Kazakh president from 1990 until his resignation in March this year. Yet the CICA has come up with little to show for the breadth of its membership. Its first meeting – with 15 countries at the deputy-minister level – was held only in 1996. Three years later, the first ministerial meeting adopted the Declaration on Principles Guiding Relations between CICA Member States, followed in 2002 by the first summit, which adopted a charter, dubbed the Almaty Act.

In the context of the growing US-China rivalry and Beijing's increasing interconnections in Asia – not least because of its flagship Belt and Road Initiative (BRI) – China is betting that it can change Asia’s “hot economics, cold politics” paradox. China wants to give the continent political cohesion, supplying "an agreed concept of legitimacy", as global security icon Henry Kissinger might call it. According to Xi, this would hinge on the adoption of a comprehensive, cooperative and sustainable New Asian Security Concept, which actually builds on longstanding institutional norms.

The CICA vision is of an Asia as a common and indivisible space, underpinned by multidimensional and diffuse regional security arrangements (i.e. no hegemon)

From outset, the CICA was modelled on the Organization for Security and Co-operation in Europe (OSCE), practically copying that group’s nomenclature and multidimensional and trust-driven approach. At the same time, members set out their own principles and tenets – dubbed the “Almaty Spirit”, after the city in Kazakhstan where two founding documents were signed.

Key pillars of the Almaty Spirit include “sovereign equality”, “respect for the rights inherent in sovereignty”, “refraining from the threat or use of force”, “territorial integrity of the member-state”, the “peaceful settlement of disputes”, and “non-interference in internal affairs”. The organization professes also to adhere to the United Nations Charter and the Five Principles of Peaceful Coexistence.

The CICA vision is of an Asia as a common and indivisible space, underpinned by multidimensional and diffuse regional security arrangements (i.e. no hegemon). The Almaty documents refer to the goal of fostering “an atmosphere of peace, confidence and friendship” through the adoption of mutually agreed confidence-building measures in the economic, environmental, human, and military-political dimensions.

They also acknowledge the “diversity of national characteristics, traditions, cultures and values of the Asian States” as a “mutually enriching factor”, emphasizing tolerance and dialogue in international relations as well as among civilizations. Reflecting the “individuality and diversity of [members’] views, irrespective of their political, economic and social systems as well as their size, geographical location and economic development level”, the CICA only takes decisions by consensus.

To be sure, the emphasis on sovereignty, equality and non-interference is consistent with existing regional norms and practice. The Almaty Spirit concept resembles other normative regional constructs such as the “ASEAN Way” and the “Shanghai Spirit” (of the Shanghai Cooperation Organisation). But what are the odds of the CICA evolving into what Beijing would like it to become – the foundation for a new Asian security architecture?

Asian elites have for decades considered the idea of a homegrown regional governance system or concept broader than ASEAN that would connect nations despite their large number and many differences. The ASEAN Regional Forum (ARF), the East Asia Summit (EAS) and the ASEAN Defense Ministers-Plus (ADMM+) framework are examples of ASEAN-centric initiatives along this line, though they include the US, Australia and New Zealand.

The notion of “Asia for Asians” underpins China’s vision for the CICA, something which may appeal to regional elites, especially in this period of rising nationalism and populism, although they may disagree on just what that catchphrase means. While many hold anti-American views, the intensity and political relevance of those sentiments vary from one country to another, with many countries actually rather pro-American. Even so, such leanings do not necessarily make them pro-Chinese. Many may be described as nations that simply do not want to have to choose sides.

In this light, the Almaty Spirit seems to cater to the shared economic and political interests of members, whether they stem from their colonial past or from challenging relations with the West in the present. There is an aspirational element – the search for a common Asian identity. The concept offers a veil of legitimacy for countries of varying types of political regime that are pursuing statist development strategies not according to the Washington consensus.

Even though a revamped CICA could offer its members enhanced engagement with countries in the network and opportunities for more “face-time” with counterparts, it is far from clear whether the Chinese plan is viable. One reason is trust – a notoriously scarce commodity in the international relations of the region. Although CICA’s confidence-building approach would seem to suggest that trust would be a fundamental element of the organization, China’s leadership position naturally raises questions. Beijing has garnered significant regional goodwill over the past two decades, especially thanks to its supportive roles in the 1997 and 2008 financial crises. Yet it still elicits much suspicion.

Another question mark is membership and the legitimacy the roster of 27 members – three of which (Bangladesh, Sri Lanka and Qatar) joined under China’s chairmanship – and eight observer countries (as well as five observer international organizations) may or may not bestow. The CICA has the largest membership of any international organization in the region. Yet it is far from representative of Asia as a whole, with at least 20 countries in the region not involved in the group in any way at all.

The re-emergence of the CICA should be understood in the context of the deteriorating US-China relationship and the regional strategies the two great powers are pursuing. On the one hand, the US has been tightening its post-war bilateral alliances, among other moves, reviving the Quadrilateral Security Dialogue (The Quad) with Japan, Australia, and India to maintain its longstanding regional hub-and-spoke architecture.

On the other hand, China is promoting Asia’s geopolitical and geo-economic amalgamation through multilateralism centred on its flagship BRI and its (lesser known) plans for the CICA to evolve into a regional security framework with the Almaty Spirit as the conceptual, even emotional glue. These plans rest on a solid axis with Russia based on shared designs for a Greater Eurasia and mutual accommodation in Central Asia and the Asia-Pacific.

This is a decidedly non-Western approach, which may be setting off alarms in Washington and the capitals of US allies. But does it represent the early steps toward a Chinese Monroe Doctrine in Asia, an assertion of a regional sphere of influence or hegemony? That is not clear. Multiple forces within the CICA itself are pushing for an open regional order from Singapore to Kazakhstan, which has proposed renaming the group the Organization for Security and Development in Asia (OSDA). And it is important to note that the US has observer status in the organization so it has not been entirely sidelined. The next CICA summit is scheduled for 2022, by which time China’s real ambitions for the group may become clearer.

Nicola P Contessi is an international affairs specialist with expertise in global governance, foreign and security policy. He is an associate of the York Centre for Asian Research at York University in Toronto, Canada. Dr Contessi earned his PhD from Université Laval in 2012.