When Public and Private Merge: South Korea and the Chaebol

The recent impeachment and subsequent removal from office of South Korean President Park Geun-hye have revealed the extent of state-business collusion in the country. But this is far from being a solely Korean story, as it puts ties between public and private actors under the spotlight. 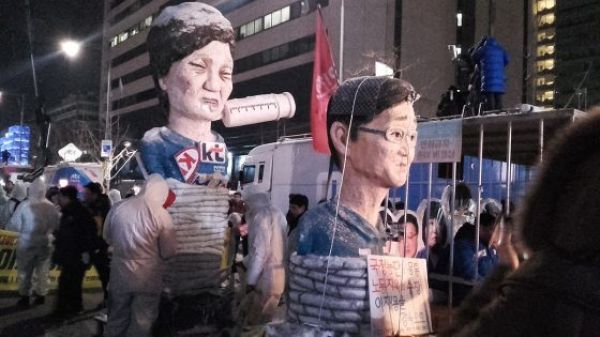 South Korea was recently shaken by a series of corruption scandals that led to the impeachment and imprisonment of former President Park Geun-hye. Several chaebol, South Korea’s large family-owned conglomerates, were involved in these scandals. They had been receiving favors from the government and were participating in policymaking in different sectors, such as official development assistance (ODA).

The popular demonstrations that led to Park’s ouster in 2017 voiced frustrations against a political class that is becoming steadily less distinguishable from big business. South Korean citizens have regularly expressed this frustration as chaebol, the backbone of the country’s industrialization under Park Chung-hee, president from 1963 to 1979, became so dominant over the national economy and society that South Korea has been dubbed “the Samsung Republic.”

Reflecting the general public’s preoccupation with the subject, contemporary South Korean cinema is particularly fond of plots that center around corruption, such as the moral corruption of chaebol families (Im Sang-soo’s The Housemaid and The Taste of Money) or collusion between businessmen and politicians (Woo Min-ho’s Inside Men or Jo Ui-sok’s Master).

The Evolution of the Chaebol

The state-chaebol relationship has undergone transformations as the chaebol progressively became less dependent upon the state’s developmental directions. Previously, the chaebol were subordinated to the government’s economic directions. State bureaucrats tightly controlled their access to credit. Firms were only permitted to follow industrial growth strategies that were in accordance with national developmental priorities.

Chaebol became so dominant over the national economy and society that South Korea has been dubbed “the Samsung Republic.”

But democratization at the end of the 1980s marked a transformation in the state-chaebol relationship. The newly elected democratic government of Kim Young-sam, president from 1993 to 1998, undertook a series of reforms to liberalize South Korea’s economy, which had until then been heavily protectionist, albeit export-oriented. Under the segyehwa (globalization) policy, in effect from 1993, state control over the private sector greatly diminished and the chaebol were able to enter global markets without governmental restrictions. They looked for investment in international capital markets, joined global value chains, and moved core production activities offshore in an effort to reap benefits from the global division of labor, notably in Southeast Asia and post-Soviet Europe. Thus, chaebol became transnational corporations independent from the South Korean state. As such, they acquired unprecedented political power in the 1990s.

When the 1997 Asian financial crisis struck, the South Korean public blamed the chaebol for their irresponsible financial behavior, and the state for its unfaltering support of the corrupted conglomerates. The Kim Dae-jung government (1998-2003) adopted a series of neoliberal reforms in response to the crisis. The hope was that through market-oriented reforms, business competition would be enhanced and the monopolistic position of the chaebol limited. In particular, the chaebol were required to be financially transparent and limit their activities outside their key commercial sector. This tough stance toward the conglomerates generated hope that the state could regain control over business, but the market reforms eventually benefitted the chaebol and further strengthened their dominance over South Korea’s economy and society.

With the subsequent election of the conservative Lee Myung-bak, the state abandoned its anti-chaebol rhetoric and policies. Lee had himself been at the top of the chaebol as chief executive officer of Hyundai Engineering and Construction. He promised to restore economic growth to a country in which the economy was stagnating, and identified the chaebol as national saviors. Following the failure of Kim Dae-jung’s anti-chaebol policies, Lee considered the conglomerates too fundamental to South Korea’s economy to be bridled or even reformed. National economic stability was so dependent upon the chaebol’s revenues that national interest could no longer be distinguished from that of the companies.

Today, although the developmental state’s institutional apparatus has undergone transformations, the state-business alliance still dominates South Korean politics. For instance, many ODA projects are implemented in middle-income countries, such as Vietnam, that offer lucrative market access opportunities for the chaebol. In addition, chaebol or chaebol-affiliated contractors helm a notable number of ODA infrastructure projects.

The chaebol are constantly able to negotiate with state elites and voice their demands. Business is informally, structurally, and institutionally included in policymaking.

The very role of the state as a guarantor of national competitiveness eliminates the distinction between public and private interests.

These channels of inclusion include powerful business associations such as the Federation of Korean Industries. These associations cooperate with the government on setting the country’s economic directions, consultative bodies in which business and state actors work together, and semi-official meetings of business elites with ministries. In addition, state and business actors share strong personal connections: they often come from the same regions in the country, they are often alumni of South Korea’s top universities (Seoul National University, Korea University, Yonsei University), they meet at luxurious golf clubs, restaurants, and hotels in Seoul, and they intermarry and establish personal alliances.

Finally, state-business cooperation is encouraged by schemes such as public-private partnership (PPP) arrangements. These schemes allow corporations to invest in overseas procurement markets while benefitting from the state’s diplomatic capacities and protection from risk. The institutionalization of public-private cooperation through PPP schemes in South Korea is in line with a global trend of development privatization, in which states are increasingly keen to finance development projects with corporate capital. However, PPP schemes can encourage collusion between the state and business as well.

Despite the specificities of South Korea’s political economy, the recent chaebol-related corruption scandals reveal the extent of the privatization of politics on a global scale. South Korea is not an exception; rather, it is a case in which public-private collusion is coming under the spotlight in an unprecedented manner.

Kalinowski, Thomas. "The Politics of Market Reforms: Koreas Path from Chaebol Republic to Market Democracy and Back." Contemporary Politics 15, no. 3 (2009): 287-304.

Kim, Yun Tae. Bureaucrats and Entrepreneurs: The State and the Chaebol in Korea. Paju: Jimoondang, 2008.

Juliette Schwak is an assistant professor in international political economy at Tokyo International University. Her work on nation-branding and Korean development assistance policies has been published in "Asian Studies Review" (2016, 2018) and "Journal of Contemporary Asia" (2018).