The opposition movement in Hong Kong has endured for seven months because it has built a powerful political narrative that successfully connected five technical demands for change with the community values and emotions of Hong Kong citizens, writes 2019 AsiaGlobal Fellow Massimiliano Santini, now visiting policy fellow at the European University Institute. 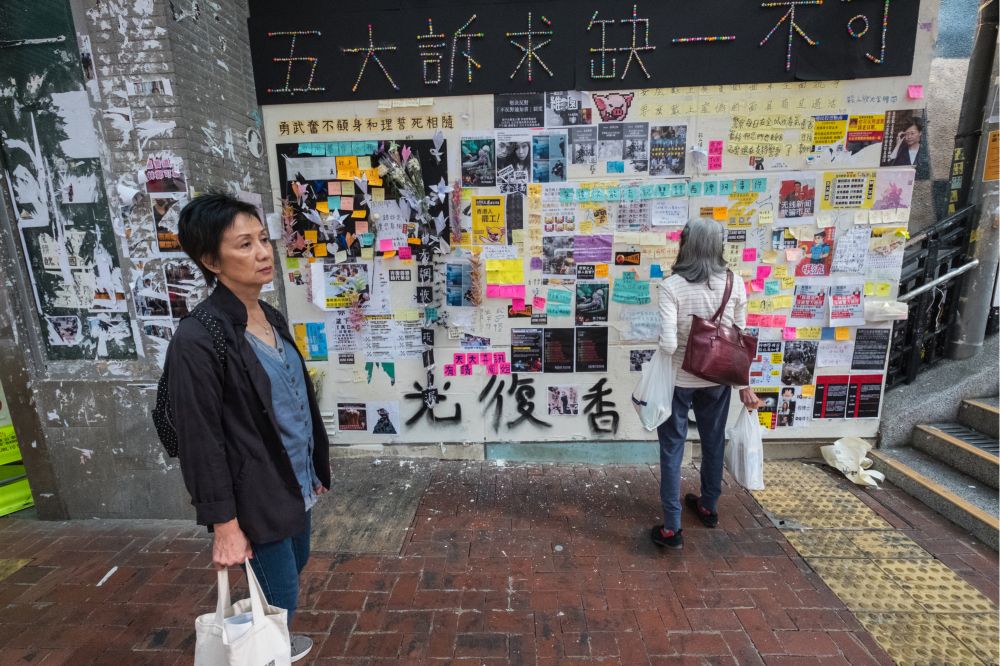 Communicating the five demands: Key to the mobilization has been the power of the political narrative and its ability to bridge the requests for change with the unique set of values that have characterized Hong Kong people (Credit: Hanohiki / Shutterstock.com)

In the 1970s television series Longstreet, shown on the ABC network in the United States and abroad, US-born Hong Kong-raised martial arts legend Bruce Lee teaches the blind hero how to defend himself. “Be water, my friend,” he tells him, advising that flexibility is necessary to adapt to an ever-changing environment. The current opposition movement in Hong Kong has adopted this metaphor to inform its strategy, leading the South China Morning Post in June 2019 to describe the protests as “a shape-shifting guerrilla game”. Even more powerful, however, is the narrative that the movement has designed and deployed during the past seven months – an unprecedented length in the recent history of social movements – that has captured the attention of opposition movements from Catalonia to Chile.

The most effective way to communicate a vision of the world, or any demand for change, is through a political narrative. What began as a demonstration of opposition to a single piece of legislation – an extradition bill that many saw as leaving Hong Kong vulnerable to an unpredictable Chinese legal system – turned rapidly into a full-fledged manifesto of political demands: the formal withdrawal of the extradition bill from the legislative process, the establishment of an independent commission of inquiry into police conduct, the retraction of the classification of the rallies as “riots”, the release and exoneration of people arrested, and universal suffrage direct elections for members of the Legislative Council and the chief executive. While the extradition bill was withdrawn early in September, the opposition movement has for half a year kept millions of residents (reckoning by the reported turnout at some marches and at district polls in November) mobilized in support of all the demands in a city of approximately 7.5 million people.

Key to this mass mobilization has been the power of the political narrative that the opposition movement has adopted and put forward, and its ability to bridge the requests for change with the unique set of values that have historically characterized Hong Kong people. While the protests grew more radical and unpredictable during the past couple of months, they have largely maintained the support of the population at large. The results of the November 24 district council elections, which led to a significant swing of support from pro-Beijing and independent incumbents to mainly young pro-democracy challengers, is evidence of that many in the public had bought into the opposition movement’s political narrative, though not necessarily approved of the its more radical tactics.

Political narratives are powerful tools that people have used for eons to organize and undergo change, but they have rarely been deployed intentionally by political movements and parties as a vehicle for social change. Historian Yuval Noah Harari points to narratives as the driving force that propelled human ability to move past the hunter-gatherer stage to the creation of complex societies driven by progress. Using myths, metaphors, folktales, symbols, and visual images, narratives provide context for people to make sense of the world around them. They are vehicles that transport facts to people’s minds and allow them to be digested and understood in a certain way.

Cognitive science has long studied the way the brain absorbs information. George Lakoff, a professor emeritus of cognitive science and linguistics at the University of California, Berkeley, pointed out that if somebody tells you, “Don’t think of an elephant,” you will entirely focus on the elephant, since the word activates in the brain the “frames”, or the context, responsible for understanding what an elephant is. “Frames are mental structures that shape the way we see the world,” Lakoff wrote. “As a result, they shape the goals we seek, the plans we make, the way we act, and what counts as a good or bad outcome of our actions.”

This use of frames has been adapted to shape the Hong Kong opposition movement’s agenda. The metaphorical chant “Retake Hong Kong, revolution of our times” (光復香港 時代革命) was coined in 2016 by Edward Leung, an activist advocating the independence of Hong Kong. It evoked the historic call for freedom by all Chinese provinces from the Qing dynasty early in the 20th century, as well as a call to arms to liberate Hong Kong people from Japanese occupation during World War II.

The current opposition movement reframed this slogan in terms of asserting Hong Kong’s autonomy from mainland China, focusing on Hong Kong’s idiosyncratic identity rooted in the rule of law, civic freedoms and local traditions. The metaphor effectively bridged the technical demands of “withdrawing the extradition bill” and “introducing universal suffrage” with Hong Kong’s core values of “rule of law” and “freedom of speech”, evoking at the same time a sense of pride in the Hong Kong way of life. The dry, technical requests enshrined in the “five demands” suddenly could resonate in people’s hearts and minds by tapping into the values and emotions they inspire.

The Hong Kong opposition movement has deployed cultural metaphors to gather support through shared memories and common heritage. For example, evoking the “Lion Rock Spirit” (獅子山精神) as a source for the five demands refers to Hong Kong’s traditional values of solidarity and perseverance, combined with the hard work necessary for upward social mobility and economic advancement. The slogan was popularized as a theme song of another 1970s TV series, Below the Lion Rock, which portrayed real life in Hong Kong during that period. 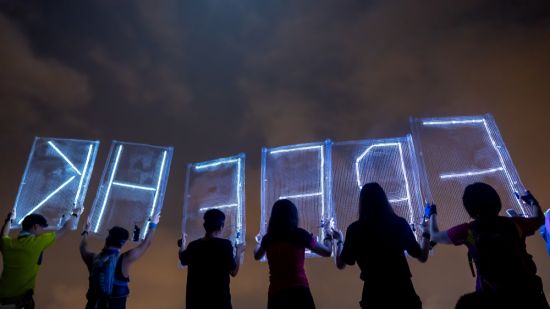 Atop Lion Rock peak, Sept 13, 2019: The adoption of values-based goals to push for requests such as an independent inquiry has helped drive people to rally in ways demands alone would not have been able to achieve (Credit: Jimmy Siu / Shutterstock.com)

Lion Rock is a distinctive geographical feature that lies between Kowloon and the New Territories, the peak of which is visible to many poorer and recently arrived Hongkongers living in Kowloon. Similarly, when people chant in the street “There are no rioters, only tyranny” (沒有暴徒 只有暴政), they powerfully connect the request for an independent commission of inquiry into police handling of the use of force, with the treasured civil liberties of Hong Kong citizens, while at the same time instilling a sense of fear for the police’s real or perceived lack of accountability. The adoption of values-based and emotional goals to push for a technical request such as an independent inquiry has helped drive people to rally in the streets in ways technical demands alone would not have been able to achieve.

Other determinants of Hong Kong’s socio-economic conditions – skyrocketing housing prices, high incomes and wealth inequality, in addition to growing depression and suicides rates – have contributed to this unprecedented unrest only insofar as the opposition movement was able to use metaphors, myth, or symbols to weave those factors into the greater storytelling that has been shaped in the streets. For example, the opposition movement anthem “Glory Be to Thee, Hong Kong” (願榮光歸香港), entirely crowd-written and crowd-performed since last August, evokes the traditional emotional journey common to many liberation movements, acknowledging people’s deepest feelings including angst, rage and fear, while evoking hope for freedom.

Far from showing any sign of fatigue, the most radical protesters have further escalated their antagonistic actions in November. A student died on November 8 during a rally. Three days later, the police shot another student. The day after, a fiery night battle between the police and the protesters ensued inside the city’s second oldest university, the Chinese University of Hong Kong. At the district polls at the end of that month, candidates supporting the opposition movement gained control of 17 of the 18 councils. The elections appeared to open the way for the more peaceful and inclusive side of the movement to take control of the demonstrations once again. On December 8, an estimated (by organizers) 800,000 people participated in a march to mark International Human Rights Day two days later.

Political uprisings tend to keep people mobilized for much shorter period of time. They usually fade away when their demands are met, at least in part, by the establishment, like the gilets jaunes in France earlier this year. Or they are repressed by the authorities, like Thailand’s Red Shirts in 2013. Or finally, they are able to take mainstream the reasons for their demands for change, as happened with the Orange and Rose Revolutions in Georgia and Ukraine, respectively, during the early-to-mid 2010s. 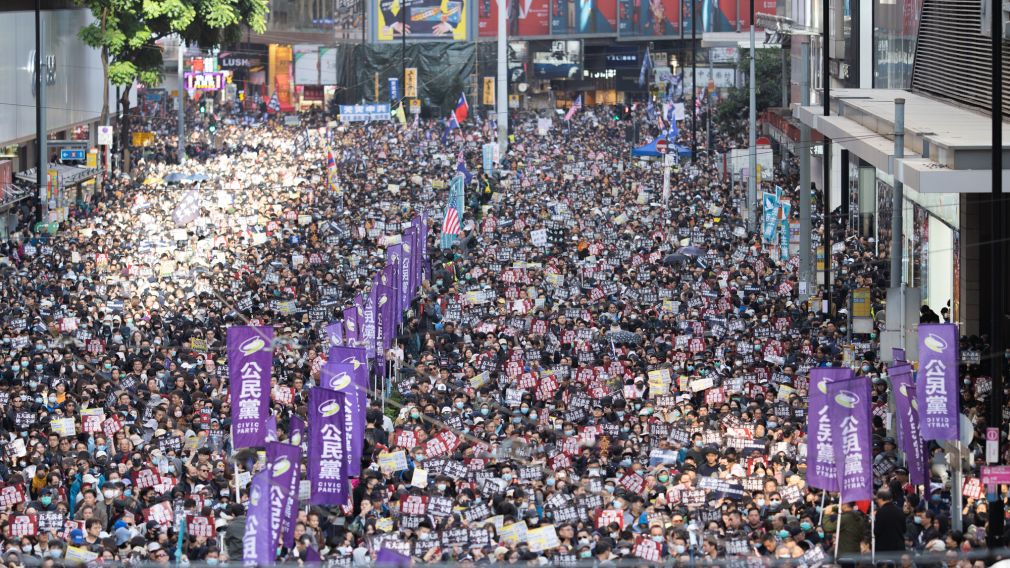 Marchers cover the streets, Dec 8, 2019: The district elections opened the way for the more peaceful and inclusive side of the opposition movement to retake control of the demonstrations (Credit: omonphotography / Shutterstock.com)

In the final scene of the 1970s movie The Way of the Dragon (猛龍過江), Bruce Lee confronts Chuck Norris in one of the most epic battles between good and evil ever fought on screen. Staged in Rome’s Colosseum, the two martial arts masters performed a quintessential fight between good and evil, and the resulting victory of good epitomized the power of perseverance and moral values. Hong Kong’s opposition movement hopes to achieve just that – using the power of Hong Kong values and emotional response to succeed in pressing their requests for change.

Polletta, Francesca. (2006) It Was Like a Fever: Storytelling in Protest and Politics, University of Chicago Press, Chicago.

Massimiliano Santini is a visiting policy fellow in the School of Transnational Governance of the European University Institute in Florence, Italy. Prior to this, he was a 2019 AsiaGlobal Fellow at the University of Hong Kong’s Asia Global Institute. For ten years, he worked as a senior economist with the World Bank.