The Responsibility to Prepare and Prevent: The Urgent Need for a Climate-Security Governance Architecture

Today’s international security and governance architecture was born of the post-World War II period, when a conflict-weary world sought to prevent another clash of nation-state alliances drawn into battle by the expansionist actions of a few. Yet many modern security challenges do not fit neatly into postwar constructs, argues Rachel Fleishman of the Center for Climate and Security. Pandemics, mass migration and environmental degradation – and, most prominently, climate change – defy national borders and the world must prepare for concerted, coordinated action to prevent predictable cross-border threats. 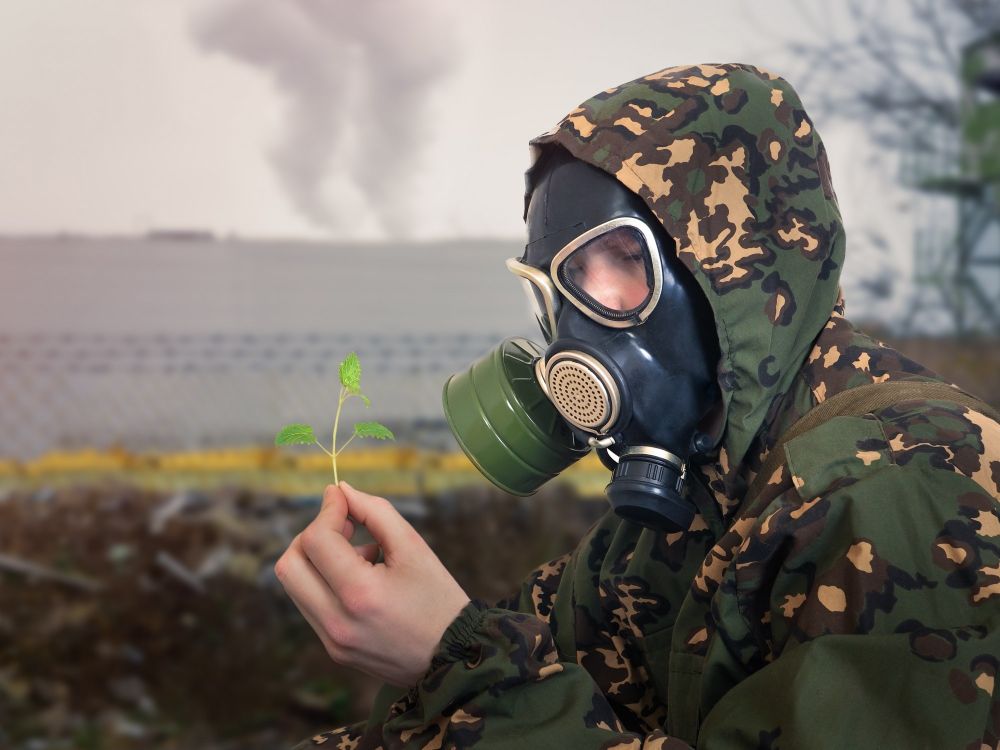 The Covid-19 pandemic has illustrated how a single natural catastrophe – in this case, a global public-health disaster – can quickly spawn national and international security threats. Consider how the coronavirus infiltrated a US aircraft carrier, compromising operational readiness even while military forces were being called into service to establish hospital facilities and help enforce social distancing and administer testing – all while China was projecting military influence in the South China Sea and the American leadership was issuing warnings to Iran.

Climate has had the same effect. The 40 US$1-billion natural disasters in 2019 – including bushfires in Australia and California; typhoons in Japan, China and Bangladesh; and flooding or droughts in dozens of places around the globe – killed approximately 11,000 people and resulted in countless humanitarian and rescue operations.

Climate security has become a poster global-security issue for the 21st century. The term represents a constellation of risks that threaten human security and state stability on multiple levels. In fact, climate change has come to be recognized in defense and national intelligence circles as a threat multiplier – a set of factors that fuels and exacerbates existing threats.

Threats to climate security often start with extreme weather, which might compromise critical infrastructure including food, transport, energy, and health systems. Absent fully functioning systems, the health of both communities and the economy deteriorates.  Military personnel, often the “first responders of last resort”, are often called in for humanitarian and disaster response. But their ability to deploy may also be compromised if their installations, equipment and training are not designed for the job.

As governments, especially but not limited to economically challenged or fragile states, become incapable of delivering food, water, healthcare and other services, population displacements, conflict over inequitable access to resources, and political instability often follow. This pattern was evident in the 2011 uprisings in Syria and Egypt, among other places.

Adversaries can exploit such disruption to societal norms to threaten or radicalize entire groups of people, leading to further instability and conflict. As documented in the Center for Climate and Security’s Epicenters report, the Islamic State (IS) systematized the use of water as a weapon, denying it to needy populations and threatening to inundate Baghdad.

Climate change also upsets resource-sharing norms in the global commons. For example, the combination of over-fishing in and migration of fish stocks from the South China Sea has incited several limited skirmishes to date. The question is whether the presence of the Chinese navy, regional militaries and US patrols will prevent serious conflicts or make them more likely. Meanwhile, low-lying regions such as the Mekong Delta and entire nations such as Fiji and Tuvalu are facing the existential threat of being inundated by a climate-induced rise in the sea level.

Yet as climate-security risks grow, so too does the ability to predict them. A review of climate models from the 1970s to the present reveals that overall they accurately predicted the rapid onset of human-induced climate change over the past 50 years. Today’s models are even more sophisticated. The UN Intergovernmental Panel on Climate Change (IPCC) Special Report on Ocean and the Cryosphere in a Changing Climate published in September 2019 added 10 percent to estimates of the projected sea level rise this century. We can now assess with greater certainty where people, assets and supply chains are at risk from climatic trends.

Models of political and economic stability are maturing as well. The US Army and intelligence community are investing in tools to predict where fragile states and pockets of social discontent may devolve into mass dislocation and conflict. Overlaying the resulting maps of economic instability, insufficient physical infrastructure and inadequate state institutions with climate stress provides an indication of situations that may devolve into conflict or war.

Framing a responsibility to prepare and prevent (R2P2)

The combination of unprecedented risk and unprecedented foresight creates a “responsibility to prepare” for a future that is increasingly already present, and to prevent potentially catastrophic futures. According to Caitlin E Werrell and Francesco Femia, proponents of the concept outlined in their report “The Responsibility to Prepare and Prevent (R2P2): A Climate Security Governance Framework for the 21st Century”, the goal is to “systematically address climate-security risks at a whole-of-international security landscape level (national, regional and international) in a way that decreases the probability of instability and conflict”.

Systems approaches are favored in defense and security because of the dynamic, trans-boundary and multi-disciplinary nature of the threats. They are essential to address climate security because of the need to climate-proof the institutions themselves, allowing them to take quick, locally relevant action. In this instance, institutional design – not a topic favored by government officials – is critical to establishing a foundation for success.

Six principles should inform the integration of climate security into existing institutions. These are highlighted below, with examples of how a robust climate-security framework might look at the United Nations: 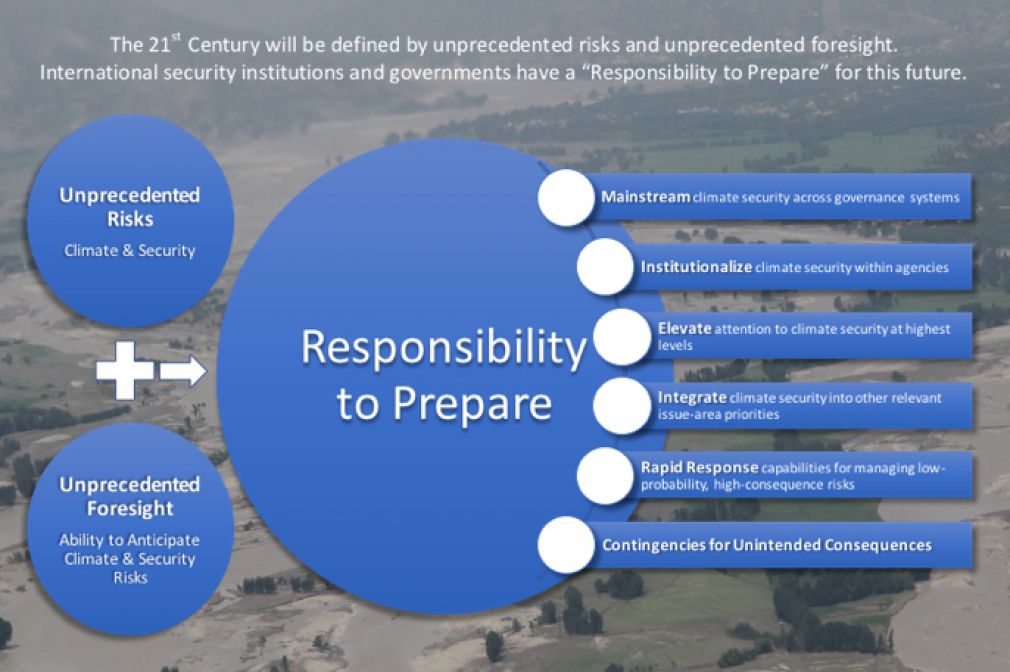 Center for Climate and Security

Mainstreaming: Assessing climate impact has historically been absent from the UN’s institutional consciousness. Correcting this entails making them part of regularly scheduled activities like intelligence briefings and dialogues. Arria formula meetings, informal sessions of the UN Security Council (UNSC) that can include external expertise in consultations, could help ensure that new or emerging issues are not missed.

Institutionalization: Getting decision makers the right information at the right time and in the right format requires a proactive strategy of data collection and analysis. A network of “climate security crisis watch centers” could credibly fill this need. Some already exist. The US National Oceanic and Atmospheric Administration (NOAA) monitors trends such as weather patterns, shipping and fish stocks in the Pacific, alerting authorities when either natural disasters or commerce-driven competition could endanger local populations. A collection of such centers, with added attention to security implications, could make use of local government and academic expertise to bring both quick-moving and slow-onset threats to the attention of officials.

Elevation: A classic challenge in security institutions is projecting an urgent warning to a level commensurate with the attention it merits. In the climate context, there is the twin challenge of “connecting the dots” with the geographic or functional departments where the impact may explode. To elevate and connect such warnings, the UN Secretary General might designate a special representative for climate security. This department could fulfill its function by overseeing the early warning centers mentioned above and delivering advice to the UNSC.

Integration: Because climate change is an emerging security concern, it is not yet integrated into other focal issues. But because it is a threat multiplier, it is important to do so quickly. Pinpointing the climate element of vector-borne diseases, which may develop into pandemics such as the Covid-19 outbreak, for example, could enable action to save millions of lives. Integration might be achieved by placing climate security analysts in functional silos or by creating inter-agency structures to identify and address emerging issues.

Rapid response: Prevention is always the goal. But sometimes, emerging security threats require urgent response. Red-flag, or trigger, mechanisms are thus built into a security apparatus to engage decision makers and enable quick deployment. A similar system should be established for climate security. Embedding these mechanisms in the climate security crisis watch center network and connecting them to national-level institutions would further improve organizational capacity to respond quickly in the case of a low-probability, high-impact event.

Contingencies for unintended consequences: Even with the best planning, unanticipated risks arise. Governments can prepare by using future scenario methodologies to anticipate potential outcomes and prevent the most dangerous eventualities. An example is geo-engineering technologies designed to remove carbon dioxide from the atmosphere, which could inadvertently disrupt weather patterns and thus food and water supplies. Iterative, inclusive use of future scenario approaches with key stakeholders could form the basis for a multilateral framework that shares research but also prescribes agreed boundaries for if, when and how such technologies would be deployed.

Military and security institutions have a historic opportunity – indeed a responsibility – to act decisively. The world cannot afford to “learn from experience” with a real climate security disaster. Nor is it likely to redesign existing security institutions completely. The best strategy is to adopt a “responsibility to prepare and prevent” framework and make use of the unprecedented foresight that technology provides to upgrade the security and diplomatic institutions at our disposal. A systems approach, driven by data and informed by multivariate security analysis, is the best insurance against future threats to climate security.

King, Markus D; and Burnell, Julia. (June 2017) “The Weaponization of Water in a Changing Climate”, in Werrell, Caitlin E; and Femia, Francesco, “Epicenters of Climate and Security: The New Geostrategic Landscape of the Anthropocene”, pp 67-73, The Center for Climate and Security, Washington, DC, USA.

Werrell, Caitlin E; and Femia, Francesco. (October 2019) “The Responsibility to Prepare and Prevent: A Climate Security Governance Framework for the 21st Century”, The Council on Strategic Risks and The Center for Climate and Security, Washington, DC, USA. 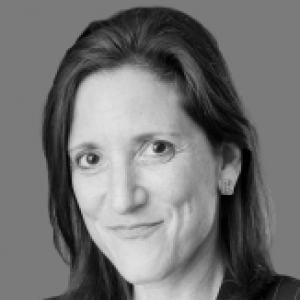 Center for Climate and Security, Council on Strategic Risks