The Philippines, a major maritime nation, must better protect its resources and exclusive sovereign rights. The South China Sea disputes, where China has exerted increasing dominance over one of the planet’s vital waterways, have been a sorely-needed wakeup call. 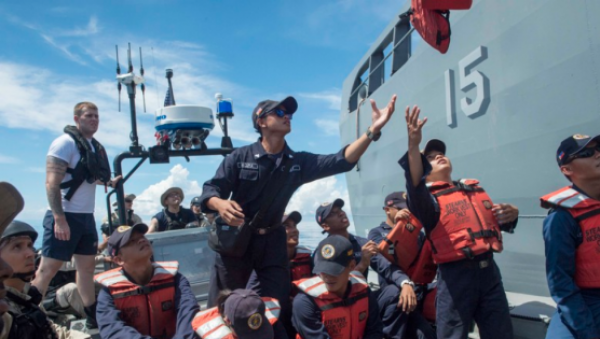 The standoff over territorial rights to the South China Sea has exposed the depth of the Philippines’ reliance on the waterway for food and energy self-sufficiency. Manila must protect the country’s interests by standing up to Beijing or risk losing access to potentially trillions of dollars in fishing and oil and gas resources in adjacent waters.

China has been expanding its presence, both military and civilian, on the eastern shores of the Philippines. Philippine defense officials have raised concerns about China’s deployment of submarines and warships to the area, as well as its unilateral marine scientific research and renaming of seabed features in the area.

The South China Sea accounts for up to a fifth of the total fish catch of the Philippines, close to 5 million tons per year. Not only is it a source of staples such as tuna, galunggong (scad), and danggit (rabbitfish), but it is also home to about a third of the coral reefs within the Philippines Exclusive Economic Zone. In addition, it provides mineral compounds crucial to the production of nutritional supplements, cosmetics, and organic pesticides.

Yet, the Philippines is facing a multitude of threats in the South China Sea. These include illegal, underreported, unregulated fishing; reclamation activities by China that by 2015 had damaged up to 300 acres of coral reefs (translating to a loss of US$100 million per year); and territorial disputes, which could threaten the Philippines’ civilian and military access to contested areas.

After all, by virtue of its geography, the Philippines is a consummate maritime nation. It has the fifth-longest coastline in the world, almost as long as that of Russia, and boasts the fourth-largest shipbuilding industry in the world by gross tonnage. No wonder Filipinos are disproportionately represented among global seafarers today, ranking second in the world in numbers behind only China, which has a population 11 times larger.

Manila must protect the country’s interests by standing up to Beijing.

Prior to the advent of Western colonialism, the Philippines was never an internally coherent political unit with a sense of collective identity. It was instead a tenuous collection of often competing micro-states (barangays) that paid tribute to various external powers and, over time, came to adopt competing universalist religions: Islam in the southern Mindanao regions and, not long after, Catholicism in the northern and central regions.

The three-centuries-long Spanish occupation never led to the creation of robust state institutions in the country. The U.S. occupation of the Philippines in the first half of the 20th century, meanwhile, led to the establishment of modern infrastructure (highways, universities, and airports) as well as representative democracy. Through these periods, institutions came to be dominated by an oligarchy composed of a mestizo Spanish-Chinese elite. These elites oversaw a weak central state that was ripe for exploitation.

The 1990s saw the exit of U.S. forces from the Subic and Clark bases in the Philippines. This was followed by China’s occupation of Philippine-claimed features in the area. The Philippines has only recently begun to develop a strategic awareness of the importance of its surrounding waters. In many ways, the fate of the South China Sea disputes has become an existential question.

It’s the extractive nature of Philippine political-economic institutions that largely explains why the country has one of the weakest and most underfunded armed forces in the region. Despite being the biggest beneficiary of American military aid in Southeast Asia, and enjoying decades of interoperability and regular training with the global superpower, the Armed Forces of the Philippines have been bedeviled by chronic corruption, decrepit hardware, and strategic distraction such as persistent insurgencies in rural regions.

In fact, the weakness of the Philippine state has both precipitated and preserved two of the world’s longest-running communist and Islamist insurgencies. Failed governance in the south has also given birth to a lucrative pirate trade network in the Sulu Sea and surrounding waters. This network is dangerously exploited by Islamic extremists, including those who have pledged allegiance to the Islamic State.

In many ways, the fate of the South China Sea disputes has become an existential question [for the Philippines].

In the past decade, however, the Philippines has begun to embrace a more proactive strategic culture after decades of perilous neglect. Under the Benigno Aquino administration (2010-2016), the Philippines embarked on a multi-billion-dollar military modernization program, aiming to augment the country’s naval and air force capabilities.

The country’s current administration, led by President Rodrigo Duterte, is building on its predecessor’s efforts to create a 21st century navy, capable of deterring external threats and monitoring the country’s vast waters. Key allies such as the U.S., Japan, and Australia, and new partners such as Russia and India, have also offered capacity-building assistance to the Philippines. Japan, for instance, has provided advanced multi-role vessels and surveillance aircraft crucial to enhancing the Philippines’ intelligence, surveillance, and reconnaissance capabilities. The U.S. has also stepped up its maritime security cooperation with the Philippines, including joint amphibious exercises in the South China Sea. Australia, meanwhile, has been a valuable source of counter-terrorism and counter-piracy training.

The Aquino administration also initiated a successful legal warfare strategy, which saw an arbitral tribunal constituted under the United Nations Convention on the Law of the Sea largely uphold the Philippines’ sovereign rights claims in the South China Sea. Duterte, however, has chosen to pursue joint development agreements with China in order to exploit untapped resources in the contested Reed Bank. Amid domestic pushback in the Philippines against such arrangements, though, it remains to be seen if the two sides will move forward.

Through a combination of naval modernization and improving relations with China, the Philippines has placed itself in a stronger position to defend its economic and territorial interests in adjacent waters. Yet, there are fears that such efforts may have come too late.

Richard Javad Heydarian is a Manila-based academic and columnist. His latest book is “The Rise of Duterte: A Populist Revolt Against Elite Democracy” (Palgrave) and, forthcoming, “The Indo-Pacific Age.” He has written on Asian geopolitics for the world’s leading publications, including "The New York Times," "The Washington Post," "The Guardian," and "Foreign Affairs."