The Philippines Beyond the Dark Spell

Despite his questionable, often violent leadership, Philippine President Rodrigo Duterte enjoys an astounding 80% approval rating. In actuality, this support is carefully weighed and highly conditional. While Duterte won the presidency by speaking to the anxieties and hopes of the citizens, he now has to deliver on his promises, and the people are keeping tabs. 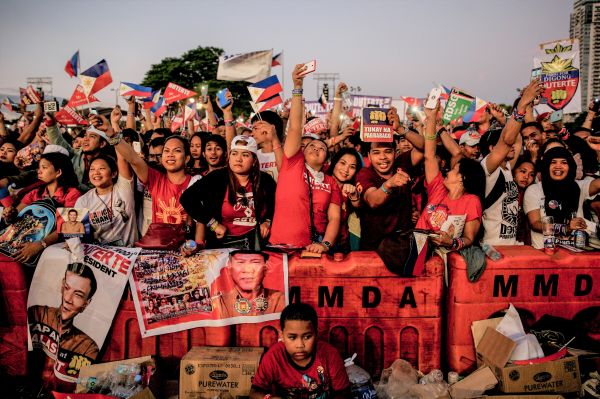 The Philippines is under a dark spell.

Since May 2016, it has been ruled by a strongman who has called for the “genocide” of drug addicts, rejected aid from the European Union for their perceived meddling with the country’s human rights situation, and sung a power ballad for the commander-in-chief of the United States during a summit dinner.

This strongman has launched two wars—one that has wreaked havoc on a city in the southern Philippines captured by ISIS-inspired militants, and one that has killed more than 4000 drug suspects in the streets of Manila.

And yet, this strongman enjoys a high approval rating of over 80% two years into his term. How can Philippine President Rodrigo Duterte get away with this?

For some observers, the answer lies in a stereotype. They believe that Mr. Duterte remains popular because his supporters have been duped. They say that these individuals are enamored of Rody’s dark charisma, like a naïve romantic captivated by machismo and tough love, that support for Mr. Duterte is a pathology. Dutertards—a contraction of Duterte’s retards—is the pejorative critics use to portray Duterte supporters as “stupid” people who find the strangest justifications for the president’s jokes about raping women.

When viewed from this perspective, Philippine democracy appears to have no future. Falling under the bewitchment of a strongman seems to mark the end of hard-won democratic victories 32 years since the ouster of the dictator Ferdinand Marcos.

But the most convenient explanations can also be the most dubious. There is more to the impression that popular support for Mr. Duterte can be reduced to citizens being under the spell of a populist leader.

They say that these individuals are enamored of Rody’s dark charisma, like a naïve romantic captivated by machismo and tough love, that support for Mr. Duterte is a pathology.

For the past two years, I have been conducting field research that seeks to understand the rationalities of Mr. Duterte’s supporters. I have been intrigued by the ways in which citizens make sense of Mr. Duterte’s political style, the moral calculus they use when making judgments, and the emotions they invest in a man who has promised so much.

Contrary to the caricatured portrayals of Duterte supporters, I argue that support for Mr. Duterte is conditional, not fanatical.

My conversations with disaster-affected communities in Leyte, students living through martial law in Mindanao, and widows of the drug war in Manila reveal constant weighing of anxieties, values, and hopes. Their nuanced positions are often obscured by the divisive rhetoric on social media, partly because of networks of disinformation and propaganda.

People’s complex views on the drug war are one example. While a majority express support for the government’s intensified campaign against illegal drugs, polls suggest that 90% of Filipinos consider it important to keep drug suspects alive. This belies the impression that support for Mr. Duterte extends to support for the killings.

This logic is best expressed in the narratives of the women left behind in Mr. Duterte’s drug war.

Take the case of Anita*, a mother I interviewed in a slum community in Manila. Anita’s son was found dead, dumped in a street not too far from where she lives. She suspects that her son was a victim of extra-judicial killings.

While a majority express support for the government’s intensified campaign against illegal drugs, polls suggest that 90% of Filipinos consider it important to keep drug suspects alive.

When she went to the morgue to claim her son’s remains, she received a packet with only one item found on her son’s body—his membership card to the Mula sa Masa (From the Masses) Duterte Movement.

“We’ve always been Duterte supporters,” Anita told me. She continues to believe in the president today, despite what happened to her son.

There is a range of justifications for this view. Often, mothers and widows pin blame on the police. Dolores, who saw her son shot dead in a police operation, argues that while it was Mr. Duterte who ordered a crackdown on addicts, it was the “heartless policemen” who targeted innocent people.

“Duterte cannot order policemen to grow a conscience,” she said. “The police should have conducted a proper investigation.” In this narrative, Dolores makes a claim about due process. While the president’s anti-drug campaign is sensible, the police need to act with compassion and competence.

Other respondents affirmed this view. The issue is the corrupt police force. This is the same institution that has run extortion rackets among those living in slum communities for decades. The respondents count on Mr. Duterte to get back at corrupt cops.

Why Support a Drug War?

That left-behind families continue to find Mr. Duterte’s drug war sensible can be puzzling. But if there is one lesson that can be learned from Mr. Duterte’s penal populism, it is the importance of listening to citizens’ latent anxieties. Mr. Duterte may have overstated the statistics on illegal drug use in the Philippines, but the anxieties it causes are real as far as people’s lived experiences go.

Going back to Anita’s story, she argues that while her son is a victim of the drug war, she is also concerned about the safety of her granddaughter, who is a potential target of meth addicts hanging out in street corners. Her concern for safety is shared by other respondents I have met in the course of my fieldwork—from a young saleslady who carefully plans her route home to avoid “troublemakers” to disaster survivors worried about their teenage sons falling prey to drug syndicates just when their lives are starting to get back on track. Mr. Duterte’s appeal lies in a promise that these everyday anxieties can be addressed.

But such appeal is conditional. In my interviews, I have also observed constant weighing of judgments about the president. While some prefer his hard-handed approach to crime, they remain skeptical about his capacity to generate jobs. The streets may be safer, but the trains are still rickety, traffic congestion continues to be a problem, and inflation is causing serious concerns.

Such weighing is best expressed by a young mother I met in a disaster zone. She voted for Mr. Duterte, but she also wrote down the promises the president made. “I made a list so I won’t forget,” she said. “We know what we deserve.”

To Understand is Not to Justify

A desire to understand the rationalities of Mr. Duterte’s supporters should not be interpreted as a defence of the president’s policies. By engaging in empathetic listening, I hope to make sense of the context in which the man known as “the butcher” is allowed to rule.

She voted for Mr. Duterte, but she also wrote down the promises the president made. "I made a list so I won’t forget," she said. "We know what we deserve."

There are several lessons to learn from this. One is to recognize that support for Mr. Duterte is underpinned by rational calculations. This should not only give comfort to the doomsayers of Philippine democracy, but it should also humble those in power. The Duterte regime would be remiss to think that it enjoys unwavering public support. The populist promise has a shelf life.

The second challenge is to create spaces where latent anxieties can be expressed. Before Mr. Duterte politicized the issue of illegal drugs, drugs-related concerns remained in the private sphere, discussed among neighbors and not in public venues. One can only imagine what other underlying anxieties exist that can be ripe for another populist leader to politicize.

Mr. Duterte has gained popularity for his vulgar voice, but we must not forget that he now holds power because he listened.

*The names of respondents have been changed.

Nicole Curato is a senior research fellow at the Centre for Deliberative Democracy and Global Governance at the University of Canberra. She is the editor of "A Duterte Reader: Critical Essays on Rodrigo Duterte’s Early Presidency." (2017, Ateneo de Manila University Press/Cornell University Press)