The Most Vulnerable: The Pandemic’s Impact on Bangladesh’s Garment Workers

Power imbalances are at the heart of the devastating impact of the Covid-19 pandemic on Bangladesh’s crucial readymade garment industry. Intense competition between suppliers and a lack of transparency enables the brands to dictate the terms of their agreements. This in turn leaves workers at the mercy of employers, who imposed layoffs for an estimated 10 percent of the workforce, furloughs for most during lockdown, and a heightened level of uncertainty for everyone, especially the most vulnerable such as women. The authors of a study on the impact of the pandemic on Bangladesh’s garment workers conducted by the Institute for Human Rights and Business in partnership with the Subir and Malini Chowdhury Center for Bangladesh Studies at the University of California, Berkeley, discuss their findings. 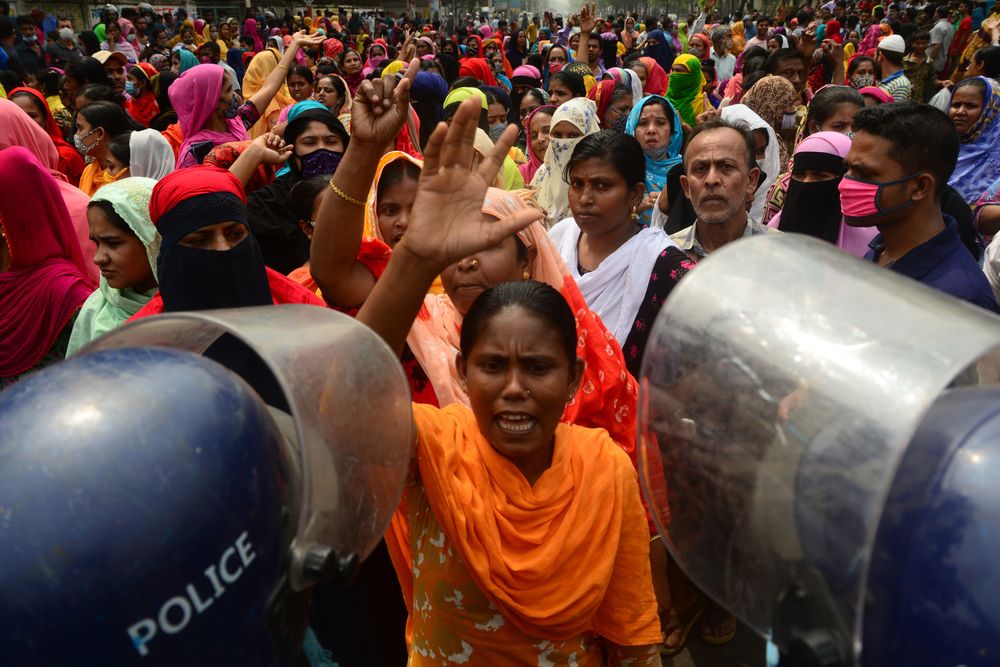 In the 50th year of Bangladesh’s independence, the South Asian nation can look back at considerable achievements, especially its much improved development indicators. These include increased female literacy, more female participation in the labor force, and higher life expectancy. American diplomats had dismissed Bangladesh as an international basket case at the time of its independence; today, in some areas at least, Bangladesh has done better than the two countries it was once part of – Pakistan between 1947 and 1971, and British India before 1947.

The international readymade garment (RMG) industry has emerged as an important sector in helping Bangladesh employ people and generate prosperity. The RMG sector worldwide has seen a significant shift in production from the industrialized north to the Global South in the past few decades, creating millions of jobs in emerging markets. In Bangladesh alone about 4.4 million people work directly in the sector and another 9.6 million are indirectly involved. Further, as of 2019, the sector accounted for 80 percent of Bangladesh’s exports. The country comes second only to China in the export of readymade garments.

To understand the impact of the pandemic on the industry in Bangladesh, and in particular, its vulnerable workers, a large majority of whom are women, the Institute for Human Rights and Business in partnership with the Subir and Malini Chowdhury Center for Bangladesh Studies at the University of California, Berkeley, conducted qualitative research primarily by interviewing international brands and Bangladeshi manufacturers and union leaders. The report found that the lockdown had several adverse impacts on the workers, affecting their standard of living, the quality of food they consumed, and their physical and mental health, and resulting in a fall in wages of nearly a third by some estimates. This impact is the result of the way the global RMG industry is structured.

In early 2020 the shelter-in-place orders aimed at containing the spread of Covid-19 led to a dramatic drop in demand for new clothing. In the US alone, nearly US$100 billion in retail spending disappeared in March 2020, and apparel retailers were receiving projections indicating that they should expect a 79 percent decrease, or US$17 billion less revenue in April 2020 compared with April 2019. As a result, the clothing brands that rely on third-party suppliers, predominantly based in Asia, began cutting orders. 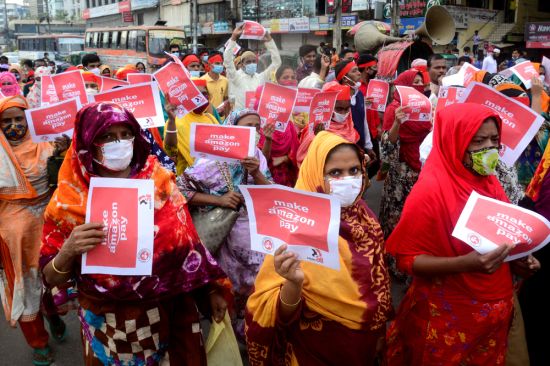 A survey conducted by the Center for Global Workers’ Rights (CGWR) at Penn State’s School of Labor and Employment Relations in association with the independent Worker Rights Consortium in Washington, DC, from March 21-25, 2020, revealed that 45.8 percent of Bangladeshi suppliers reported that “a lot” or “most” of their nearly completed or entirely completed orders were cancelled by their buyers. In early March 2020, factory owners in Bangladesh started reporting that they were receiving notices from brands to delay shipments. By the end of the following month, about US$3.2 billion in orders had been suspended or revoked.

Intense competition between suppliers and a lack of transparency about brands’ interaction with suppliers result in a power imbalance that enables the brands to dictate the terms of their agreements. During the pandemic, this power imbalance was manifested by some brands’ use of force majeure provisions (and the warning that they might do so in some other cases) and the renegotiation of terms that enabled brands to delay acceptance of products, extend payment terms, and apply further discounts on orders already placed. All of this squeezed Bangladeshi manufacturers.

During our interviews, a senior representative of the London-based Business and Human Rights Resource Centre noted that, during the pandemic, research showed “that suppliers are being pressured to accept lower prices than ever before and brands are leveraging the desperation of suppliers, using the crisis to get even cheaper prices, which is alarming, and it is causing further issues in terms of suppliers’ cashflow, and that has a knock-on effect on the workers, even in terms of affecting the suppliers’ ability to be compliant with labor standards.”

What compounded the problem was that Bangladeshi suppliers were expected to cover the costs of making improvements in their factories and granting paid leave where appropriate, with insufficient financial support from the government and no direct assistance from the brands. Coupled with a decrease in orders, suppliers were struggling to meet the new health-and-safety guidelines intended to protect workers from transmitting Covid-19 while in the factories. Factories had to be redesigned through reshaping the factory floor to ensure social distancing, providing workers with sanitizers and personal protective equipment such as gloves, and building washing areas. All of these expenses were the responsibility of the suppliers.

For workers, the effects of the pandemic on the RMG sector meant layoffs for an estimated 10 percent of the workforce, furloughs for most during the government-imposed lockdown, and a heightened level of uncertainty for everyone. Pregnant women were often singled out for layoffs, the consequence of which was that companies did not have to pay maternity benefits to the women.

Furloughed workers were legally entitled to receive 65 percent of their pay during the first government-imposed lockdown (lasting from March 26, 2020, through late April 2020), but this still meant a 35 percent pay cut during this time. By the end of May 2020, Bangladeshi workers had lost nearly 30 percent of their wages, estimated at US$502 million. The dramatic economic shock experienced by workers resulted in serious compromises in consumption and asset depletion.

In a separate University of California, Berkeley-BRAC study from mid-2020, 82 percent of the Bangladeshi workers interviewed said the income they had in April-May 2020 was less than their income in February 2020. In addition, 77 percent admitted that it was difficult to feed everyone in their household, while 69 percent of the workers said that they ate less protein-intensive foods (meat, fish, eggs and milk) from February to May. 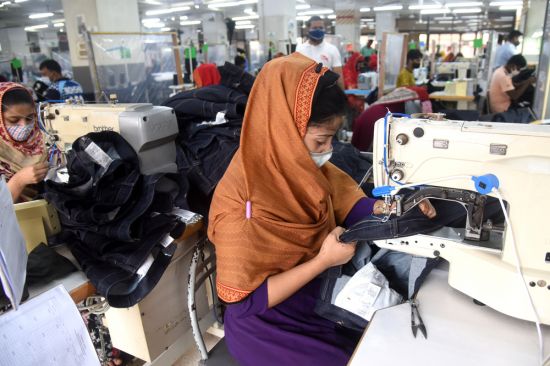 Back to business: On August 1, 2021, garment factories in Bangladesh reopened on two days' notice and despite rising Covid-19 cases (Credit: Mamunur Rashid / Shutterstock.com)

The pandemic intensified the already extreme vulnerability of workers in the RMG industry in Bangladesh. Workers lack good systems for representation on issues of substance to them and are therefore unable to be effective in raising their concerns. The seriousness of this issue is heightened given the industry’s push to keep costs as low as possible to satisfy brands that are responding to consumer demand for fast fashion.

Our study was conducted with the support of the United Nations Development Programme (UNDP) Business and Human Rights in Asia (B+HR Asia), the UNDP Bangladesh Country Office, and the Swedish International Development Cooperation Agency. We collected timely information on the response of global retailers to the Covid-19 pandemic and its effects on Bangladesh garment workers. The report, “The Weakest Link in the Global Supply Chain: How the Pandemic is Affecting Bangladesh’s Garment Workers”, which was published in May 2021, includes insight from major international brands, Bangladeshi suppliers, local labor leaders, and international civil society representatives.

While the brands did not provide direct financial assistance to suppliers, they worked with them in other ways. For example, there were some good examples of responsible business practices exhibited by brands during the pandemic, including:

Just as the report was being published, Bangladesh underwent another lockdown, which shows that more sustained attempts, and not piecemeal efforts, are needed to protect the workers. Our report further urges the following:

All parties – the Bangladesh government, international agencies, brands, suppliers and unions – have a role to play. As business professionals, policymakers and scholars consider what conditions businesses in Asia will operate under in the coming years, it will be crucial to learn from the pandemic to prepare for and avert future crises.

Flores, Lucia; and Shields, Lauren. (December 2020) “’I can hardly sustain my family’: Understanding the human cost of the COVID-19 pandemic for workers in the supply chain”, HERproject, BSR, San Francisco, CA, USA. 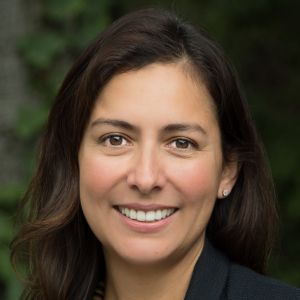 Nancy Reyes Mullins is an independent researcher who graduated in 2020 from the master of development practice program at the University of California, Berkeley. 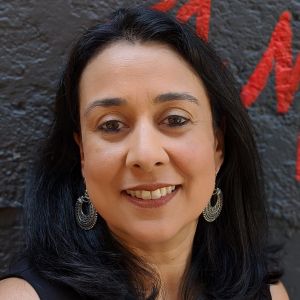 Sanchita Banerjee Saxena is director of the Subir and Malini Chowdhury Center for Bangladesh Studies at the University of California, Berkeley. 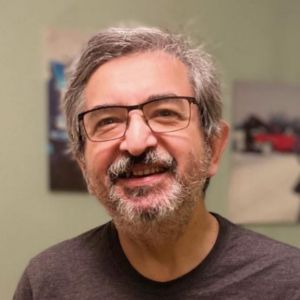 Institute for Human Rights and Business

Salil Tripathi is senior adviser, global issues, at the UK-based Institute for Human Rights and Business.