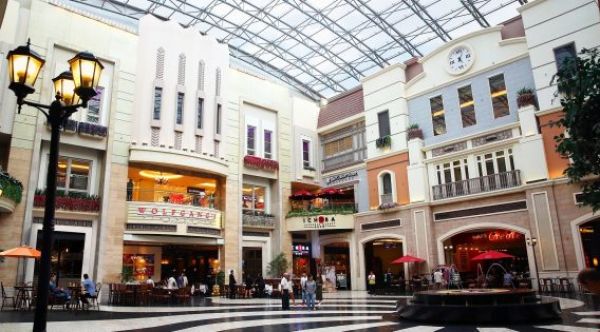 The Plaza at Newport Mall, Manila, 2016. Photo courtesy of Ohitsjara.

What could be more common than a trip to a shopping mall in any Southeast Asian city? Asian cities boast some of the largest shopping centers in the world—including the SM Mall of Asia in Metro Manila, covering 4.2 million square feet with a 20,000-person capacity. Malls are not solely destinations for flirting with an infinite amount of consumer products, activities, and foods; they are also unique urban microclimates offering air-conditioned indoor spaces, providing cool respite from hot and humid weather. In the Philippines, “going malling” is about meeting friends and family, but also enjoying free air conditioning. The more luxurious the mall, the colder the indoor microclimate.

The Trouble with Keeping Cool

In private homes, air conditioning remains a luxury for many millions of people living in the Philippines. For those who can afford to purchase an air conditioning unit, the device is still used sparingly as electricity is not subsidized and the kilowatt hour is among the most expensive in the world.

There are also hidden social and environmental costs to air conditioning that are not reflected in energy bills. Metro Manila draws its electricity from the Luzon region, and its mostly coal-fired power plants. Deriving electricity from fossil fuels depletes a non-renewable resource, contributes to local pollution and the urban heat island phenomenon, and results in greenhouse gas emissions that affect climate change.

Access to reliable and clean fuel directly correlates with social stratification and the reinforcing of inequalities.

Additionally, there are social issues with regard to energy poverty in the Philippines. Access to reliable and clean fuel directly correlates with social stratification and the reinforcing of inequalities. Further, low-income housing units are built without consideration for passive cooling, which means that less privileged groups struggle with cooling inefficiencies in their homes. Air conditioning units are beginning to appear in informal settlements, not solely for cooling but also to serve as filters for the polluted outdoor air. People do not always have a choice when it comes to making their indoor environments more livable, given the structural conditions of their buildings.

When people go about their daily lives, the question of energy access is hardly a top concern. Much of our everyday lives is made up of habits and routines, tied to social norms and expectations about how things ought to be. Elsewhere, I have discussed how hygiene and cleanliness standards are tied to air conditioning usage in the way they control personal comfort and appearance. Further to that, I would like to argue here that social norms around architecture and leisure have a direct influence on air conditioning and energy usage, resulting in various environmental and social impacts.

Locking in the Need for Artificial Cooling

Homes in the Philippines were historically built with the local in mind, utilizing materials such as bamboo and palm leaves, drawing on local competencies and craftsmanship, and accounting for heat, humidity, seasonal rains, storms, and possible flooding.

In post-WWII Manila, architects designing concrete public buildings were inspired by innovations from elsewhere that aimed to facilitate cool interiors, such as brise soleil, or sun shades, in the vein of Le Corbusier and Oscar Niemeyer. Architect Leandro Locsin (1928-1994), a recipient of the National Artist order who was prolific in the postwar period, pushed this idea to its full potential by integrating shade-providing elements onto building surfaces, as he did with the Manila Mandarin Oriental Hotel built in 1976 (demolished in 2016 to make space for a more "modern" condominium complex).

With the increased availability of air conditioning in the 1990s, there was no longer a need to design homes with the climate in mind. Today, the modern home is an air-conditioned space, and the modern building is, of course, the ubiquitous glass tower, a type of building imported from colder climates.

“What is West, is best,” deplored a contemporary Filipino architect in an interview with me in 2008, referring to housing styles from elsewhere being reproduced in the Philippines without local considerations. The Zuellig Building, an “energy efficient” glass tower in Makati (Metro Manila), uses low-emissivity glass and has received LEED (Leadership in Energy and Environmental Design) Platinum certification, but the energy reflected off of the building is simply displaced elsewhere—in this case, into the lobby of the neighboring five-star Peninsula Hotel, increasing air conditioning usage as a result.

“What is West, is best,” deplored a contemporary Filipino architect in an interview with me in 2008, referring to housing styles from elsewhere being reproduced in the Philippines without local considerations.

Organizations such as the Philippine Green Building Council have proposed voluntary measures for increasing energy efficiency in buildings. Yet ever more shopping centers and apartment buildings designed to make full use of air conditioning are sprouting up across the megacity. Passive cooling measures, such as windows that allow for the passage of air, and natural and built-in shading, are currently not a consideration in most developments. The issue with these buildings is that they lock in the need for energy usage in artificial cooling: cooled indoor microclimates become not only normal, but necessary.

What about outdoor leisure spaces? The notion of “green public spaces” can be misleading in Metro Manila, as many of such spaces are neither public (i.e. privately owned and managed) nor green (i.e. lacking in biodiversity). Manila Bay and the neighboring Rizal Park are examples of public spaces that have insufficient tree coverage, privileging concrete-paved areas. The Ayala Triangle in Makati was a patch of private green space in the financial center accessible to the public. It has now been encroached upon for commercial interests, specifically, for the building of the new Mandarin Oriental Hotel. Thus, few green spaces are privileged for social gatherings and leisure activities.

Metro Manila, like many cities in Southeast Asia, is an incredibly exciting place to be: the metropolitan area buzzes with citizen-led initiatives to promote everything from organic markets to bike routes, but it is also home to a skyline crisscrossed with building cranes that reveal an intensification in building construction.

Some of the sustainability projects underway in Metro Manila include reviving the historic area of Intramuros and making better use of the city’s rivers and canals for public boat transport. Though, to date, there has been no indication of efforts to promote more sustainable cooperative housing developments or energy sufficiency measures. Urban development trends are resulting in more buildings being built for air conditioning and fewer outdoors spaces to simply enjoy the shade of a tree on a hot day. This leads to a normalization of artificially cooled interiors, particularly commercial centers, as the main spaces for leisure.

The need to think about the microclimate as an artifact is becoming urgent. The microclimate should not be taken as a given, but rather as a socially constructed object that results from people’s expectations, social norms and standards, and material arrangements. Diversity in microclimates must be planned for, in how buildings are designed and in relation to urban development and green public spaces, and in addressing local climates.

If reducing the negative environmental impacts of energy usage and urban development is not compelling enough a reason to take action, perhaps we should frame the public discourse around human wellbeing and social equity. A research project currently underway is considering how green public spaces contribute to wellbeing in four cities in South and Southeast Asia. Microclimate diversity and naturally cooled indoor and outdoor spaces benefit everyone, particularly less privileged groups who struggle to pay utility bills and cannot afford private homes in leafy gated communities. Microclimate diversity means creating conditions that promote wellbeing and spaces that are accessible to all of society, in Metro Manila and other megacities across the region.

Sahakian, Marlyne, and Julia K. Steinberger. "Energy Reduction Through a Deeper Understanding of Household Consumption." Journal of Industrial Ecology 15, no. 1 (2011): 31-48.

Marlyne Sahakian is an assistant professor of sociology at the University of Geneva. Her research is focused on sustainable consumption, or understanding the social practices and opportunities for change in relation to environmental and social issues. She is a founding member of SCORAI Europe, a network for sustainable consumption research and action.