Leadership at Universities, from the U.K. to Hong Kong

Professor Peter Mathieson, president and vice-chancellor of The University of Hong Kong, shares his thoughts on the nature of leadership, with lessons both universal and particular to different contexts. 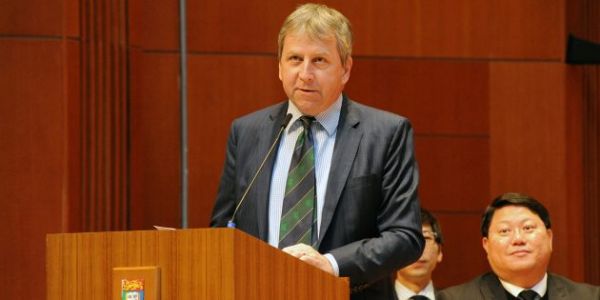 What is leadership? An adage that I like, adapted from one uttered by American politician Bob Ehrlich, is that I don’t know what leadership is, but I recognize it when I see it. All of us can see leaders and leadership, even though we might disagree on who is better at it. In my career I have learned at least as many lessons from bad leaders as from good ones.

One so-called leader I worked with was so overbearing and unreasonably demanding that he failed to get the best out of his staff because they became demoralized. After seeing the result of this “leadership,” I decided that I would never treat my colleagues that way. I do have high expectations of myself and therefore don’t consider it unreasonable to have high expectations of others. But expectations need to be reasonable and they need to be calibrated against the magnitude of the tasks being set, the experience and ability of each individual, and the organizational and/or societal context.

Context is vital: my early learning took place in the U.K., but over the past four years, I have lived my life in Hong Kong. What are the differences and similarities between the two? I have observed that in Hong Kong, perhaps particularly in a publicly-funded university, there is sometimes a fear of making decisions, due to concerns about possible consequences. Even individuals in relatively senior positions fear that public scrutiny, media attention, and/or the views of colleagues or other staff may reflect badly on them. As a result, they are less likely to make potentially unpopular decisions.

A former boss of mine used to say that one has a tank of political capital that can help one do one’s job, but that tank never gets refilled, so one must use it carefully and sparingly. Don’t use large amounts of your precious political capital on issues that ultimately are not crucial; save it for the major decisions. Of course, keeping your tank full and never using your political capital will also lead to failure. My experience in Asia leads me to believe that this is a universally valuable principle.

Don’t use large amounts of your precious political capital on issues that ultimately are not crucial; save it for the major decisions.

Leadership is about being prepared to do the right thing at the right time, prioritizing the best interests of the organization you lead rather than your own popularity. One important judgement call is when to call it a day and stand down: don’t overstay your welcome. Of course, a leader who is universally unpopular is likely to fail, especially in a democratic system. But when a leader’s sole aim is popularity, he (or she, but in my experience this is more commonly a male characteristic than a female one) has to promise things that cannot be delivered. The popularity that he so craves thus gradually erodes. My point is that my primary aim is not popularity; it is effectiveness. I believe you garner more respect for being consistent, transparent, principled, and fair than you do for always trying to please everyone.

Learn from history: philosopher George Santayana once said that those who fail to learn from the mistakes of history are doomed to repeat them. Take advice from experts: having dabbled in motor mechanics, I used to think that I could repair my own car, but I soon learned that I needed help from a professional. My advice is to listen to others, but know when to stop listening and start acting; a leader who never makes decisions cannot be effective. Learn from your mistakes; if you haven’t made any, you are probably not being bold enough.

Learn from your mistakes; if you haven’t made any, you are probably not being bold enough.

Chairing committees is an important part of many leadership roles. My advice is simple: read the papers and you will have a big advantage. Many don’t do this, at least not thoroughly enough. Decide in advance what your preferred outcomes are. Allow others to speak. Above all, don’t be afraid of taking responsibility: it goes with the job and you should have confidence in your decisions whilst always being prepared to humbly admit that you are wrong if that turns out to be the case. People will respect you for your honesty, courage, and conviction; they will not respect indecisiveness or timidity.

In a people-centric organization, for example a university, a leader’s role consists largely of managing human behaviors, encouraging the behaviors that are helpful to the organization and discouraging those that are not. One of my mentors taught me that the art of it is to convince people that whatever you want is also what they want, preferably allowing them to think it was their idea. Leadership sometimes means being willing to allow others to take credit for a good outcome and accepting that when there is a less good outcome, it will be you who carries the blame.

I like Nelson Mandela’s tip, derived from his time herding animals: if you lead from the front, you had better be sure that others are following. He preferred to walk behind, keeping the herd together, watching for any attempts to stray from the path. I have never been very good at achieving work-life balance, but I have enjoyed three holidays working as a cattle hand, riding horses in the open spaces of the United States and trying to herd cattle through gates and across pastures. Sometimes herding people feels a bit like herding cattle, at least in that it is about giving people space and inspiration to move forward.

Treasure diversity; don’t try to crush it. Gender diversity is not well-developed in universities in Asia: I have worked to improve it at The University of Hong Kong, but I have encountered resistance. Those who resist include some women who believe that the culture here is different and too difficult to change.

One thing that I have heard repeatedly is that if there is a job being advertised that requires ten characteristics, a woman with eight of those characteristics would likely consider herself inadequately qualified and therefore not apply, whereas a man with five of the characteristics would think it’s worth a try and put in an application. I have definitely seen this phenomenon play out in both the East and the West. What does this say about the way our societies educate and treat women and men? We should work to encourage women to see their own value, and find a way to educate and inform men about the circumstances that give rise to such phenomena.

The ultimate test of a leader is whether they are sufficiently secure in themselves to delegate appropriately, give opportunities to others, support them as they learn, and hope that their protégés will eventually supersede them. I take the greatest pride in seeing some of my former students and junior colleagues achieving success. We are all transient on this Earth; doing our best whilst we are here is a laudable aim. Nurturing future generations allows one’s contribution to be longer-lasting and more impactful. This is why I like working at universities.

Peter Mathieson was born and educated in the UK. He was the first member of his family to go to university, graduating from the University of London with First Class Honours in medicine in 1983. After 30 years in medical practice, education, and research, he moved to Hong Kong in 2014 to take up the post of president and vice-chancellor at The University of Hong Kong. He served in the position until 2018.