Is Asia Serious About Running the IMF?

With the process for selecting a new managing director of the International Monetary Fund (IMF) starting, Vasuki Shastry, who worked in senior communications and public affairs roles at the organization, argues that Asian countries should overcome their traditional reluctance and geopolitical impediments and differences to support a candidate from the region. 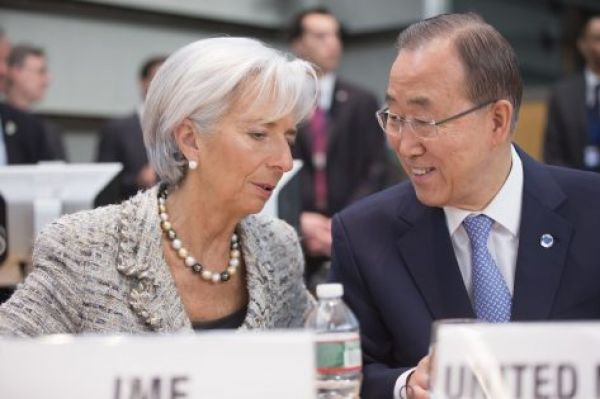 For many years now, Asian policymakers, journalists and academics have fulminated about inequities in the selection of the heads of the Bretton Woods institutions, the International Monetary Fund (IMF) and the World Bank, roles which have traditionally devolved to Europeans and Americans, respectively. The Asian narrative has been that the selection process to head two of the world’s essential multilateral institutions is deeply unfair (which it is) and it is time for someone from Asia, the world’s most dynamic region, to be selected.

This is inarguable but the track record shows that the rhetoric from Asian countries is, well, just rhetoric. The region’s political leadership has been either too timid to nominate one of their own or too divided to unite behind a single candidate.

As the membership of the IMF launches the hunt for a successor to Christine Lagarde, who resigned on July 16 and will lead the European Central Bank (ECB) in the fall, there has been the usual noise from the pundits in Asia about the imperative for a candidate from the region. Several names have been proposed – notably Singapore Senior Minister and Coordinating Minister for Social Policies Tharman Shanmugaratnam and Raghuram Rajan, who served as governor of the Indian central bank from 2013 to 2016. Another equally qualified possibility is Indonesian Finance Minister Sri Mulyani Indrawati.

The silence from the Asian policy establishment, however, has been deafening, in stark contrast to the Europeans, who via media leaks, appear to be coalescing around the candidacy of Dutch economist Jeroen Dijsselbloem, who was his country’s finance minister from 2012 to 2017, or that of World Bank Chief Executive Kristalina Georgieva, a Bulgarian. To be sure, Asian governments in the weeks ahead may well match their rhetoric by boldly claiming the IMF leadership position. However, the complexity of regional politics suggests that the process is likely to be rocky for three reasons.

First, unlike the more cohesive (such as it is) European Union (EU), Asia’s regional platforms are singularly unsuited for international financial diplomacy. China and India are part of the fledgling BRICS grouping which brings them together with Brazil, Russia, and South Africa as the voice of emerging markets on global issues. It has largely been a talk-shop with photo-ops as leaders eschew discussions on serious economic issues. Should the BRICS unite behind a candidate this time around, as they failed to do in 2011, when Christine Lagarde was appointed, and more recently this year, when American David Malpass was chosen to lead the World Bank, they will be heard. The question is, will they and what would be the incentives for doing so?

The wider regional grouping in Asia, the Association of Southeast Asian Nations (ASEAN), could in theory nominate someone to lead the IMF and seek the support of Asian heavyweights China, Japan, Korea, and India, all four dialogue partners of the organization. This would require ASEAN leaders to rally unselfishly behind a candidate and to lobby in regional and international forums over the next month, a rushed task that they have never managed to carry out even with less time pressure.

Second, as with the BRICS, Asia is riven with bilateral rivalries and tensions which complicate any single country’s ability to build a coalition of support. After all, “Asia” is a convenient, even lazy, geopolitical label. There is neither a coherent Asia nor a single Asian voice. There are divisions between developed and developing countries, and between sub-regions such as South and Southeast Asia. While there is greater regional cohesion today compared with any other time in recent history, it is insufficient to building consensus around issues like climate change and nominating a candidate to lead international institutions. In 2007, Asia did rally behind South Korea’s Ban Ki-moon’s candidacy to lead the United Nations but that was made easier in large part part because of the UN’s regional rotation for the secretary-general job.

A third, perhaps more controversial reason why Asia prefers to rant about the IMF rather than lead it has a lot to do with the region’s discomfort with exercising global power. In my experience, Asians are entirely self-absorbed with their own region and any discussion on helping other less advantaged parts of the world is met with a collective rolling of the eyes. There is an element of free-riding on the multilateral system as well, even in the case of China, the country most likely to be the next superpower, which prefers the status quo where America and Europe run global institutions like the IMF and the World Bank and are responsible for resolving global problems.

It perhaps works to Asia’s tactical advantage to complain about unfair governance at the IMF and the World Bank rather than attempt to resolve the underlying inequity in the global system. China has created new economic institutions of its own – the Asian Infrastructure Investment Bank (AIIB) and the New Development Bank (NDB) – and for now appears content, just like Japan, in its role as a regional leader.

Despite these obstacles, an Asian should be at the helm of the IMF in 2019 because this would be entirely right for times. In the Age of Trump, Brexit, and the rise of nativist politics, America (and to a more limited extent Europe) are no longer champions of globalization, freer trade and investment, and the rules-based international order. These cherished ideals created the conditions for the economic rise of Asia several decades ago, and the region today stands to lose the most from globalization’s retreat or any deglobalization or decoupling.

The new managing director of the IMF will have to build on Christine Lagarde’s legacy and prepare the institution to deal with an inevitable global crisis (as she had to do globally and in Europe) in the next few years. Running an important multilateral institution such as the IMF will give developing and developed Asia the platform and bandwidth to champion, cheerlead, and deliver on globalization’s unfulfilled promise and potential. It is an open question whether Asia will remain a bystander at this critical juncture or exercise true leadership commensurate with its growing weight in the global economy. The hope should be that it chooses the latter.