Why Inequality Divergence Between China and Russia?

China and Russia followed two distinct approaches to reform, leading to drastically different trajectories of economic growth. While both countries have experienced rising inequality over the last 30 years, Russia’s income distribution has worsened at a faster pace and in a bigger magnitude. What caused the difference in income distribution dynamics between the two? There are important lessons to be learned on the impact of policy decisions on inequality. 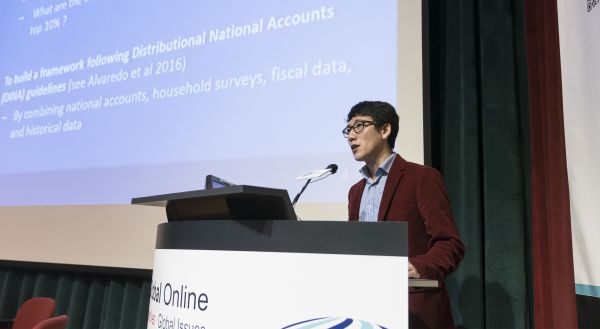 Dr Li Yang at the "Addressing Inequality Through Asian and Global Perspectives" event, hosted by the Asia Global Institute at the University of Hong Kong, 2018.

Since 1980, many economies have experienced two concurrent trends: rising wealth-income ratios and increasing income inequality. These trends have been playing out particularly spectacularly in China and Russia since their transitions from communism to more capitalist-orientated economic systems. Today, China and Russia have ceased to be communist in the sense that public ownership is no longer the dominant form of property ownership. However, due to significant differences in privatization strategies, the way in which economic growth has been shared amongst the citizens of these two countries is vastly different: the rise of inequality in Russia has been much greater than in China, and has occurred at a much faster rate.

"Big-Bang" vs "Step-by-Step" Transition Out of Communism

Russia opted for a “big-bang” transition after the fall of the Soviet Union in 1990-1991, where public assets were transferred to the private sector following the so-called “voucher privatization” strategy. Citizens were issued vouchers that could be used to purchase state-owned enterprises and public housing.

The rise of inequality in Russia has been much greater than in China, and has occurred at a much faster rate.

In contrast, China embarked on a managed transition that involved the step-by-step introduction of elements of capitalism, instead of seeking to directly convert its state-owned, planned economy into a private, market-based one. The transition has involved gradual but nevertheless wide-ranging reforms. The reforms have been implemented progressively, from special economic zones in coastal cities towards inland provincial regions, and in sectoral waves.

Tipping the Scale from Public Property to Private Wealth 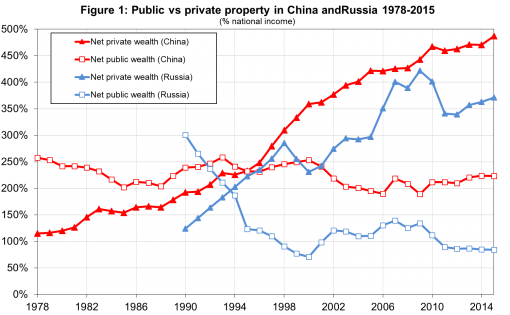 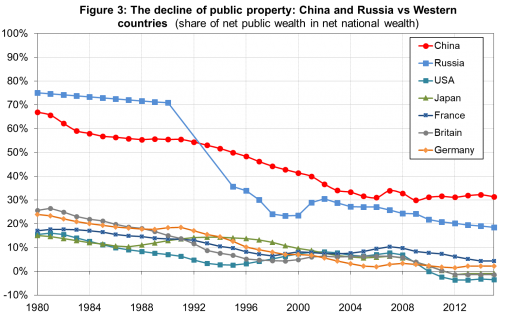 Income inequality increased markedly in both China and Russia as they made their respective transitions. This was particularly brutal in Russia after the fall of the Soviet Union. Since voucher privatization took place so fast, a small group of people was able to amass large fortunes during the early years and, in some cases, obtain highly profitable deals with public authorities (e.g. via the infamous loans-for-shares agreements). The top 1% income share in Russia is now similar or higher than the extreme levels observed in the United States. In comparison, the top 1% income share in China is closer to levels observed in France or Western Europe. Similarly, the top 10% income share in Russia has risen in a much more abrupt manner than in China, and this enormous rise has come with a massive collapse in the bottom 50% share.

Russian capitalism places few constraints on top incomes and shows high tolerance for extreme inequality. The enormous political and ideological shift that occurred in Russia can be seen as an extreme version of the ideological reversal that has taken place in the United States since the 1980s. On the other hand, China’s development model is plausibly subject to stronger ideological constraints that may limit the rise in inequality to extreme levels in the future. 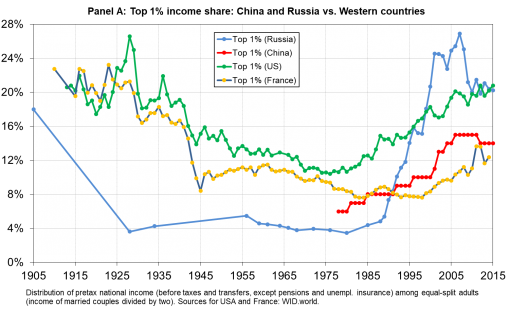 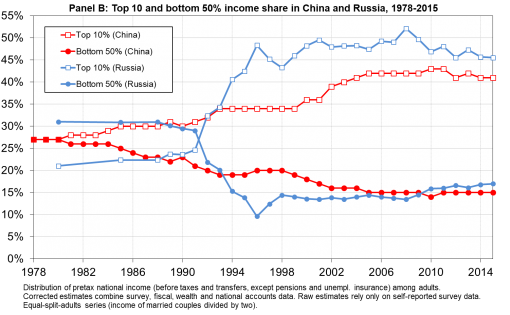 Furthermore, economic transformation has produced much higher growth in China than in Russia. Although growth has not been equally shared in either country, the outstanding growth experienced by China has lifted the living standards of the poorest very substantially, while the bulk of post-communist growth in Russia has been captured by those at the very top.

Markedly divergent post-communist inequality patterns suggest that the rise in inequality is not inevitable.

China and Russia have taken different paths in their transition to market systems. Dramatic economic transformation has resulted in substantial increases in inequality in both countries. However, the rise in inequality has been much more pronounced and immediate in Russia, and more limited and gradual in China. Markedly divergent post-communist inequality patterns suggest that the rise in inequality is not inevitable, and point to the importance of policies, institutions, and ideology in shaping inequality. 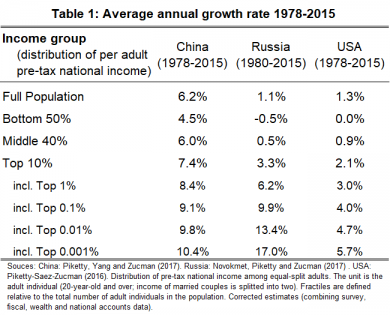 This article is based on the paper entitled "From Communism to Capitalism: Private vs. Public Property and Inequality in China and Russia" by Filip Novokmet, Thomas Piketty, Li Yang, and Gabriel Zucman (American Economic Association P&P, 2018, Forthcoming).