India and Indonesia Standing in the Way of the Indo-Pacific

There are many who would like to see the concept of the “Indo-Pacific” region evolve from an idea to reality. These supporters are looking to India and Indonesia, two of the most populous countries in the region, to lead the way. This, however, is currently unlikely, owing to misalignment between the two countries’ political-economic goals and actions. 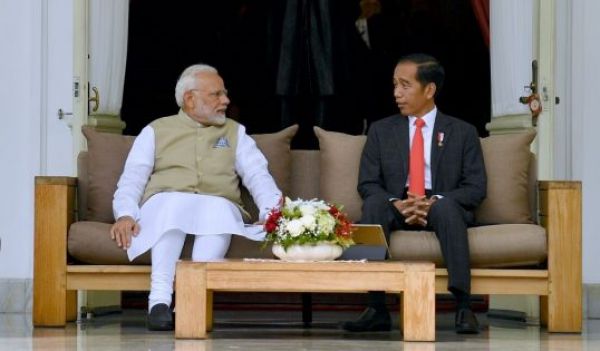 Promoters of the “Indo-Pacific” concept claim that growing economic and security links are contributing to the integration of the Indian Ocean and Pacific Ocean regions. These proponents, including Japanese Prime Minister Shinzo Abe, Australian Foreign Minister Julie Bishop, and commentators like Rory Medcalf of the Australian National University, see India and Indonesia as crucial drivers of the emergence of this Indo-Pacific strategic system.

New Delhi and Jakarta are looked upon to facilitate the establishment of a “rules-based” regional order because of the nations’ rapidly growing economies and their geopolitical positions as major, democratic powers in the Indian Ocean and Pacific Ocean, respectively. Analysis of India’s economic links to the Pacific region and Indonesia’s links to the Indian Ocean region, however, reveals that their contribution to Indo-Pacific integration remains limited.

India’s integration with the Pacific region was to be driven by the “Look East” policy launched in 1991 by the Congress Party-led government of P.V. Narasimha Rao and continued by his successors. This policy has now been renamed “Act East” by the current Bharatiya Janata Party-led government of Narendra Modi. The Look East and Act East policies included regional and sub-regional initiatives for trade, economic cooperation, and connectivity, such as the Bangladesh–China–India–Myanmar Economic Corridor. Free trade agreements have been signed or are being negotiated between India and the Association of Southeast Asian Nations (ASEAN), Malaysia, Thailand, and Australia. India is also involved in negotiations for the Regional Comprehensive Economic Partnership (RCEP).

The outcomes of these initiatives, however, have been modest. For instance, after the signing of the free trade agreement between India and ASEAN, trade between the two initially rose steadily with an annual growth rate of 22%, until 2011-2012, after which it began to decline. Moreover, India’s imports from ASEAN countries have been higher than its exports. Recent studies have attributed this decline primarily to the global economic slowdown. They also suggest, however, that India’s negative surplus with ASEAN could have been avoided with greater tariff liberalization. Signing more free trade agreements with a broader range of countries, such as South Africa and Australia, also could have helped.

New Delhi and Jakarta are looked upon to facilitate the establishment of a “rules-based” regional order.

Entrenched domestic structural problems, weak global demand, and growing protectionist sentiment among potential trading partners make the prospect of India signing and benefiting from new free trade agreements unlikely. Negotiations for a free trade agreement with Australia, for instance, have stalled on the issue of agriculture—a weak sector in India’s political economy—and services, a sector in which India has a comparative advantage. While India rejects Australia’s demand to liberalize Indian agricultural markets, Australia has resisted India’s desire for greater labor mobility for its skilled workers. India’s positions on agriculture and services have also hampered RCEP negotiations.

The protection of India’s agricultural sector is a sensitive political issue. A lack of investment in agriculture has led to the stagnation of rural growth rates and poor infrastructure development, making some Indian agricultural products uncompetitive in a liberalized market. Cutting agricultural protections is an electoral gamble for governments, given the electoral power of rural voters and the organizational strength of farmer groups.

The Indian government’s agricultural protectionism is also driven by a weak manufacturing sector. The expansion of manufacturing jobs promised by Modi’s “Make in India” policy has not eventuated. Neither has Modi’s “Skill India” scheme overcome the shortcomings of similar past schemes, which produced low-quality education and few job placements. These outcomes, in part, reflect India’s long-term underinvestment in public education.

India’s infrastructure-building to improve connectivity between its northeast region and Southeast Asia is slowly proceeding. Yet, its sub-regional projects have long been hampered by secessionist movements in its northeastern states, a lack of significant immediate economic benefits, and concerns about Chinese expansionism and economic dominance.

Indonesia as a Global Maritime Fulcrum

Indonesia’s integration with the Indian Ocean region stretches back to the establishment of the Indian Ocean Rim Association (IORA) in 1997, and has been enhanced by its engagement with the Indo-Pacific concept since 2013. The current government of Joko Widodo envisions Indonesia as a maritime fulcrum: the “point of support where the burden of the two oceans actually rest.” Interest in Middle Eastern energy and India’s potential as an investor and market, in particular, has driven Indonesia’s Indian Ocean outreach. During Indonesia’s 2016-2018 leadership of IORA, the group held its first leaders’ summit and produced a concord calling for greater intra-regional trade and investment.

However, despite renewed efforts, Indonesia’s engagement with Indian Ocean economies remains limited. A recent attempt to encourage greater investment from Saudi Arabia paid limited dividends, with Indonesia achieving a relatively paltry pledge of US$6.71 billion. Likewise, over-optimism has burdened Indonesia’s courting of India, with trade actually declining in recent years. Protectionist sentiments continue to hamper a deepening of India-Indonesia trade. In one telling example, India’s aggressive use of import duties drove Indonesia to turn to China as a market for its crude palm oil exports.

For Widodo, the Indian Ocean region and the broader Indo-Pacific are only of value to the extent that they serve his developmentalist economic agenda.

Indonesia’s unattractive investment climate and protectionist trade policies have contributed to the failure of bilateral efforts to boost integration, while limited complementarities and a lack of political will have prevented greater intra-IORA trade. Indonesia’s Asia-Pacific economic partners—Singapore, Malaysia, and Australia—continue to make up the bulk of Indonesia’s trade with IORA members.

The development of greater economic integration is dependent on the convergence of government policies with market activities. Under Widodo, Indonesia’s international outlook has been strongly shaped by the need for foreign investment, and its domestic political and electoral importance. A significant increase in foreign investment has been deemed crucial to funding Widodo’s ambitious infrastructure plans—the centerpiece of his Global Maritime Fulcrum (GMF) vision. This focus on domestic infrastructure development has only deepened as his presidency has matured, and has translated into an almost singular focus on attracting foreign investment, of which China and Japan have been found to be most willing sources.

For Widodo, the Indian Ocean region and the broader Indo-Pacific are only of value to the extent that they serve his developmentalist economic agenda. Indeed, as the Indian Ocean region has failed to support Widodo’s infrastructure plans, the GMF has shifted from being a vision with an emphasis on Indonesia’s place at the intersection of the Indian and Pacific Oceans—an Indo-Pacific strategy—to focusing on Indonesia’s development as a “sovereign, developed, and strong maritime state.”

“Indo-Pacific” is a term that has been increasingly used by policymakers and analysts under the assumption that economic links between the countries of the two oceanic regions will continue to deepen as the economies of countries like India and Indonesia grow and expand. The evidence suggests, however, that the structural weaknesses in the political economies of those countries will place limits on the roles they can play in regional integration. In particular, protectionist impulses, the general slowdown in growth, and the lack of complementarity in immediate economic goals and capabilities have limited the expansion of interlinkages in trade and investment. While these entrenched problems persist, the emergence of India and Indonesia as major drivers of an integrated Indo-Pacific strategic system will remain wishful thinking.

Priya Chacko is a senior lecturer in international politics in the Department of Politics and International Studies at the University of Adelaide and an academic fellow of the Australia-India Institute. Her current research focuses on populism in India and the economics-security nexus in India and Asia.David Willis is a PhD candidate in international relations in the College of Business, Government and Law at Flinders University in Adelaide. His research interests are in the emerging geopolitical and technological challenges to Australia, with a focus on Indonesia. David is completing his thesis on explanations of Indonesia’s foreign policy alignment.