The India-China Conflict: Covid-19 and the China-Pakistan Economic Corridor

China is upsetting the balance of power in South Asia to further its own economic and political interests. There is a grave danger of further armed conflict, and even a war, argues 2018 AsiaGlobal Fellow Amit Wanchoo, Founder Chairman of the HN Wanchoo Trust in Srinagar, Jammu and Kashmir, India. To preserve peace and prosperity, India, China and Pakistan need to move from confrontation in the Himalayas to cooperation around the negotiating table. 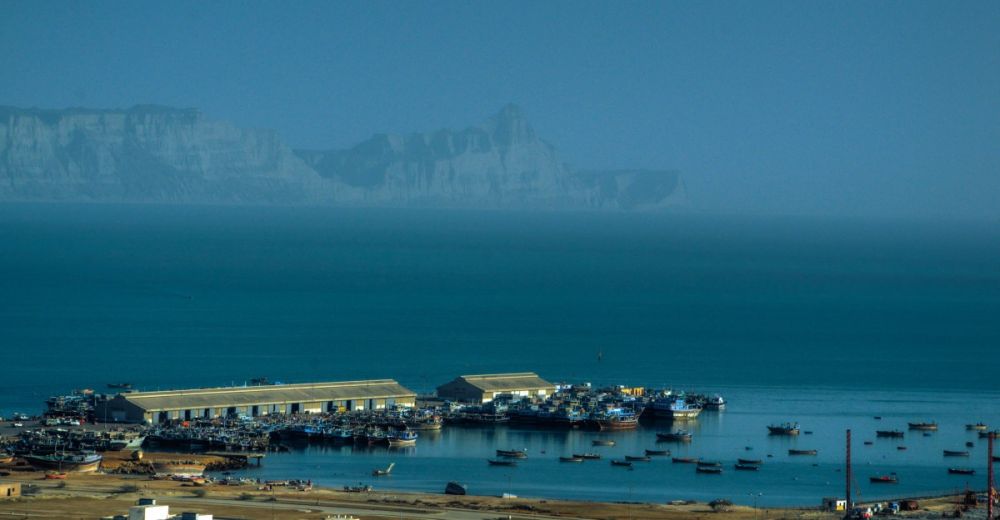 Gwadar Port is the key nexus between the China-Pakistan Economic Corridor and the two routes of the Belt and Road Initiative (Credit: umairadeeb)

This year will go down as a memorable one for both Covid-19 and conflict. While 2020 recalls the term for clear vision, geopolitically there has been little of that, especially in China's leadership. Due to its handling of the coronavirus crisis and, more broadly, its aggressive foreign policy, Beijing has seen its soft power, taken as a measure of international popularity, decrease globally.

In recent years, China has overseen the sharp growth of its robust export-led economy, even during the pandemic. But of its 15 largest trading partners – the US, Hong Kong, Japan, South Korea, Germany, Taiwan, Vietnam, Malaysia, Thailand, India, Australia, Canada, the UK, Singapore and Russia – it has strained relations with 12. This is not a positive development for the Chinese economy. Even the Belt and Road Initiative (BRI), Beijing’s showcase US$1-trillion global infrastructure development program, will not yield immediate results for China due to both the difficult physical terrain it covers and the hostility of governments in several countries along its routes.

The Chinese leadership has to understand that the world is won by diplomacy, not diktat. When Xi Jinping became Chinese president in 2012, he promised to fulfill two goals. The first was to build a moderately prosperous Chinese society and double its per capita gross domestic product to US$10,000 by 2021, the centennial of the Chinese Communist Party (CCP). His second objective was to have a rich and powerful China by 2049, the 100th anniversary of the Communist victory in the civil war and the founding of the People’s Republic. The coronavirus crisis and a series of diplomatic errors, however, have thrown China off course from achieving Xi’s vision.

Since 2013, Xi has focused on consolidating power in China. He has silenced political opponents by having them charged in a so-called anti-corruption drive. Xi was successful in removing the two-term limit on the presidency. Out of 2,964 votes, three abstained and only two voted against, thus securing him the option of continuing in office, possibly for life.

But Xi’s position is safe only when if he can provide the Chinese people with strong economic growth. Because of his insecurity, it is unlikely that China will deviate from its more aggressive foreign policy and behavior in border areas with India and in the South and East China Seas. As a result, Chinese trade and business will likely weaken, even though its economy appears to be recovering from the Covid-19 shutdown. A strong economic rebound would safeguard Xi into a third term and mitigate any threat of social unrest among those in the burgeoning Chinese middle class badly hit by the pandemic downturn.

It is not surprising then that Xi is focusing on censoring dissent, pumping more money into the system, rallying public support and tamping down discontent through appeals to nationalism. China has escalated tensions with Japan, South Korea, Vietnam, Malaysia, Indonesia and others over disputed maritime border areas. It is embroiled in diplomatic and trade clashes with Australia and Canada. The Chinese military has conducted drills near Taiwan. The relationship between China and the US has sunk to its lowest point in decades, with both sides sparring over the origins of the coronavirus, a spat that has exacerbated their already acrimonious quarrels over trade and technology.

China’s greater assertiveness has inspired the revival and upgrading of the Quadrilateral Security Dialogue (Quad), an informal forum for the US, Japan, Australia and India to discuss mutual security interests. The Quad and the Quad Plus forum, which adds into the mix France, South Korea, Vietnam, New Zealand, Sri Lanka, Taiwan, Singapore, Philippines and Indonesia, may signal the coalescing of middle-power alliances that could align with the United States in a challenge to Beijing.

As if all this were not enough, China recently opened another front with India near the eastern Ladakh border in the Himalayas. This resulted in a bloodbath on June 15 near the Galwan Valley, in which India lost 20 soldiers including a colonel and China’s People’s Liberation Army (PLA) suffered an undisclosed number of casualties. Meanwhile, Beijing raised concerns around the world by moving quickly and without consultation to impose a new security law on Hong Kong that took effect on June 30. 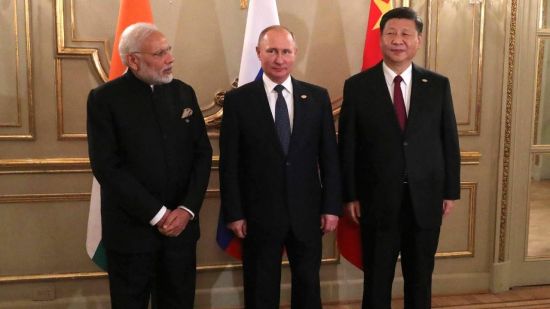 Russian President Vladimir Putin with Modi and Xi: Could Moscow broker a diplomatic solution among China, India and Pakistan? (Credit: President of Russia)

The Covid-19 pandemic offered China an opening to take the lead in a global health crisis. Beijing could have converted adversity into an opportunity to build alliances and partnerships across the globe to combat the coronavirus. China could have worked closely with New Delhi to address the outbreak. Indians and Chinese had moved beyond their hostilities dating back to 1962 and were strengthening economic and social cooperation. This would have resulted in a strong economic and political partnership between the two biggest countries in Asia.

But instead, the Galwan Valley conflict has dealt a severe blow to the relationship, with a sharp rise in extreme anti-China sentiment throughout India. Public anger is palpable as people have started boycotting Chinese products.

In July, India issued an order banning 59 Chinese mobile-phone apps including popular TikTok, Helo, Shareit and WeChat. TikTok, a video-sharing app had more than 120 million users in India, its biggest market. Delhi has moved to ban Chinese companies and even Indian-Chinese joint ventures from participating in construction and infrastructure projects. The government of Prime Minister Narendra Modi has hardened its stance on Chinese telecommunications companies such as Huawei and ZTE participating in 5G trials, instructing state-owned Bhartiya Sanchar Nigam Limited (BSNL) and Mahanagar Telephone Nigam Limited (MTNL) from accepting bids from Chinese vendors.

Until now, India had maintained neutrality and avoided aligning directly with the US, even rejecting an offer by President Donald Trump to mediate between India and China. But in light of the Galwan incident, Modi will find it difficult to take an even-handed approach to Beijing and will now have to align Delhi more closely with Washington. The prime minister’s acceptance of Trump’s invitation to join an expanded G7 meeting is an indication that this shift is already happening. Going forward, India could strengthen its strategic relationship with the US and even enhance military ties, which would surely raise concerns in China.

Modi has certainly upped the jingoistic rhetoric. On July 3, Modi made a surprise visit to Leh, the capital of Ladakh, and addressed Indian armed forces members. Without naming China, he referred to those harboring imperialism: “The age of expansionism is over and this is the age of development. History knows that expansionist forces either lost or were forced to turn back.”

China’s action in Galwan should be seen in a broader context of its two-pronged South Asia strategy to secure the China-Pakistan Economic Corridor (CPEC). The leadership in Beijing is feeling pressure on various fronts and is responding aggressively. But its approach is a short-term fix which is not likely to yield much benefit.

Running from Kashgar in China to the port of Gwadar in Pakistan’s Balochistan province through Gilgit Baltistan in Pakistan-occupied Kashmir, the CPEC is a centerpiece component of the BRI, Xi’s signature global infrastructure-development program. On August 5, 2019, India abrogated Article 370 of its Constitution to convert the autonomous state of Jammu and Kashmir into two union territories – a form of direct rule from Delhi. That change permits people from the rest of India to purchase land and property in both regions. This resulted in severe tension between India and Pakistan but since it was technically a change in the Indian Constitution, Islamabad could not garner much international support to oppose it except from China, Malaysia and Turkey.

Meanwhile, Pakistan has been under pressure from China to secure Gilgit Baltistan to facilitate the smooth operation of the CPEC. On  April 30, a seven-judge bench of Pakistan’s Supreme Court allowed Islamabad to conduct a general election in Gilgit Baltistan. They also permitted the setting up of a caretaker government until the polls are held. Having in place an interim territorial administration is tantamount to direct rule by the Pakistan establishment, thus securing Chinese interests. The elections, which are scheduled for August 18, are focused on issues aimed at weakening India’s control and benefiting Beijing.

India considers Gilgit Baltistan an integral part of its territory and has opposed and rejected the court ruling. In a sign of Indian anger, from the first week of May, the national meteorological department started including Gilgit Baltistan in its domestic weather reports. On May 9, in an online conference, former Army chief and current union minister of India VK Singh said that all of Jammu and Kashmir belongs to India, including parts administered by Pakistan. He warned: “I will not tell all of you here that we will do this, or we are going to do that, or what we will do. It will happen when the time comes. A plan is ready and the moment we see an opportunity, the armed forces will take action.”

The Galwan Valley attack was a well-planned move by China, which was aided and abetted by Pakistan. In March 2020, some senior officers of the Pakistan army and the Inter-Services Intelligence (ISI), Islamabad’s top spy agency, were seconded to the PLA’s western command and posted specifically in the Joint Staff Department of China’s Central Military Commission. This was a tactical step to safeguard the CPEC for China and open two possible fronts against India. To secure China’s western territories, Beijing has invested heavily in Gilgit Baltistan and will not take any chances with potential threats to the BRI. Pakistan has moved 20,000 additional troops to Gilgit Baltistan near the Line of Control region in northern Ladakh to match the Chinese presence.

A possible scenario going forward could be a war between India and Pakistan and a long border conflict between India and China. This would be a game-changing geopolitical development and would pose a threat to peace and stability in Asia and the world. A diplomatic solution – perhaps brokered by Russia - would be in the best interest all three countries. If India and Pakistan agree to hold on to their present territories and give assurances for the security of the CPEC in Gilgit Baltistan, the situation would improve. China would likely stop any further incursions and take steps to keep the border areas safe. The CPEC could even be converted into the CPIEC with India’s inclusion and pave the way for greater stability and lasting peace in the region. 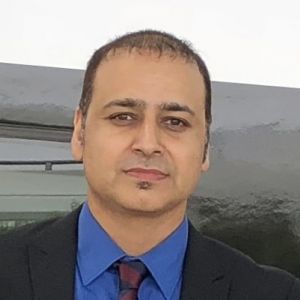 Dr Amit Wanchoo is a medical doctor, entrepreneur and social activist. He was a 2018 AsiaGlobal Fellow of the Asia Global Institute at The University of Hong Kong. He is founder chairman of the H N Wanchoo Trust, which operates an ambulance service in the Kashmir Valley, and CEO of SPACE Communications in Srinagar.