In Indonesia, Water Can Be a Public and Private Good

The management of the water supply has long been a state concern in Indonesia due to water stress in many areas and poor governance. Husna Yuni Wulansari and Tadzkia Nurshafira of Universitas Gadjah Mada in Yogyakarta argue that private-sector participation is helping alleviate the country’s water crisis in localities that have adopted a flexible approach to the principle that water is a public good. They argue that the involvement of the private sector may be necessary so long as it is not self-regulated and does not impede existing diverse models of water delivery or run counter to socio-political realities on the ground. 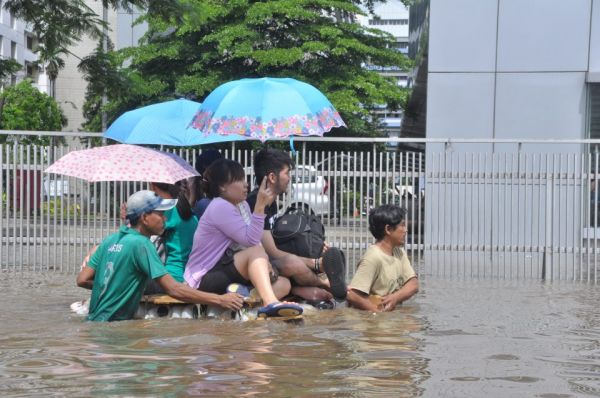 Flooding in Jakarta: Some communities have turned to the private sector to improve water supply management (Credit: dani daniar / Shutterstock.com)

Rarely before has Indonesia’s rainy season, which began in September 2019, been so eagerly anticipated. In Jakarta, the vast metropolis that is home to 30 million people, fishing ponds have dried up, creek beds are cracked and drinking-water wells are empty. Indonesia has experienced unprecedented dry weather, exacerbating water shortages.

As an archipelagic nation spread over 17,000 islands, Indonesia faces numerous challenges in addressing water supply and sanitation issues. Fresh water is readily available, but population growth, urbanization, and expanding agriculture are increasing pressures on resources and ecosystems. One in eight Indonesian households do not have access to safe drinking water and in rural areas the rate of access to piped water is below 10 percent, according to UNICEF.

Though Indonesia improved its water supply and management with policies in the 1970s and 1980s, the 1997 Asian financial crisis plunged the country into a recession – from which it is still recovering – and reduced its capacity to continue increasing the supply of clean water.

Water stress and shortages, flooding and poor water management are among the reasons why the government of President Joko Widodo is proposing that the capital of Indonesia be moved from Jakarta on the island of Java to Kalimantan on the island of Borneo. More than 90 percent of the rivers that are the sources of Jakarta’s water requirements are polluted, with 40 percent of the city’s residents lacking access to clean water. The lack of a strong regulatory framework for groundwater extraction has contributed to land subsidence that has made Jakarta one of the fastest-sinking cities in the world. Almost half the urban area is below sea level. This inevitably means severe flooding after heavy rains.

In a 2015 report, the World Bank criticized the “lack of effectiveness with which policies and finance is turned into access to improved services” and recommended that Indonesia “actively seek involvement of private sector cooperation”. However, in 2015, Indonesia's Constitutional Court struck down a 2004 law that had permitted private-sector companies to sell packaged tap water. The court ordered the government to end privatization of the water supply with the judgment determining that Indonesia's water resources should be controlled and allocated solely for public benefit, i.e. as a public good.

Though the fate of pre-existing contracts and the government’s desire to change legislation to encourage private investment remain unclear, it is certain that private-sector participation (PSP) is an inevitable mechanism that the Indonesian government could utilize to address its water supply issues. Ensuring access to water and sanitation for all is the sixth of the 17 Sustainable Development Goals (SDGs) set by the United Nations 2030 Agenda for Sustainable Development, signed by the 193 UN member states in September 2015.

Indonesia has a long and controversial history of involving the private sector with its water management policies. The recently passed Water Law has stirred up the debate. Proponents of privatization note the state’s failure in distributing safe water due to lack of efficiency and corruption, while critics argue that profit-seeking motives are counter to the principle of water being a public good. A compromise between the two stances could be to define water as both a public and economic good and harness PSP mechanisms – such as public-private partnership (PPP) – to distribute clean water efficiently. This has been demonstrated in developing countries as PSP has become increasingly prominent where poor infrastructure management has stymied efforts to increase water supply.

The foundation of PSP in the SDG framework is laid out in the 2015 Addis Ababa Action Agenda (AAAA) on Financing for Development. The AAAA highlights the importance of the private sector in serving as a partner to tackle development goals by increasing private-sector investment as well as delivering business innovations, technologies, connectivity and infrastructure in the water sector where gaps are created through lack of government capacity. As such, commercial factors can make water management attractive to the private sector and can help the government achieve its development objectives, specifically SDG No. 6.

The UN has promoted the value of water as an economic good to attract private investment and sophisticated water resource management innovations. But the private sector and must work with the public sector and other stakeholders to secure access to water and facilitate related initiatives. In Indonesia, however, President Joko Widodo’s national development agenda of economic nationalism promotes water as a public good rather than an economic good that is necessary to attract private sector investment.

Though the Indonesian government plays a prominent role in national development, it has invited the private sector to contribute to infrastructure development projects, making up for the 36.5 percent of the total required funding that it cannot provide. PSP is encouraged for various water management projects such as funding water provision and expanding the service coverage of the current water supply infrastructure.

For its part, the government still regulates, controls, and manages water provision as stipulated in economic policy measures and regulations which guarantee people’s rights to water and ensure state ownership of water provision by limiting the role of the private sector in the provision of drinking water and characterizing water as a public good.

Indonesia’s capacity to achieve the Sustainable Development Goals will require an integrated approach among all stakeholders. Water is a case in point.

Though the government has used policy measures and the concept of economic nationalism to underpin the principle that water is a public good, competing notions exist on the ground, at the local level. For example, in Pandeglang district of Banten Province and Malang district of East Java, rural communities run small private enterprises that sell clean water in water-deprived areas that cannot be reached by infrastructure or state-owned utility services.

These small businesses use local technologies such as water tankers, small-bore pipes, and wells and do not operate within the limits of government regulations or PSP frameworks. While they are profit-making ventures, small businesses such as these make water management possible in poor communities. They essentially take a dual approach, characterizing water as a private good when selling it and as a public good when they allow communities to use wells freely during the dry season and refrain from penalizing users for late payment. Water supply in Indonesia, therefore, cannot be characterized in any simple way as regions have differing approaches along the public-private spectrum.

Indonesia’s capacity to achieve the SDGs will require an integrated approach among all stakeholders in the public and private sectors. Water is a case in point. The funding, production, distribution and management of water access cannot happen efficiently across the country without the adoption of different models of delivery that employ different degrees of private-sector involvement. Nuanced approaches to water supply that regard water as both a public and private good are a practical necessity, contingent however on the political and social realities that apply on the ground. This realistic approach could be a lesson for other countries seeking to relieve water stress and ensure the water security of its people.

Husna Yuni Wulansari is a researcher in the Department of International Relations in the Faculty of Social and Political Sciences at Universitas Gadjah Mada in Yogyakarta, Indonesia. Tadzkia Nurshafira is a researcher at the Research Centre for Politics and Government in the university’s Department of Politics and Government. This article is based on the findings of their research on “Crafting Rights-Based Water Governance in Southeast Asia: State, Market and Urban Poor”, which was funded by the Strengthening Human Rights and Peace Research and Education in ASEAN/Southeast Asia program of the Institute of Human Rights and Peace Studies (IHRP) at Mahidol University in Thailand. They presented a paper on their work at the International Studies Association (ISA) Asia-Pacific conference in Singapore in July 2019.