How the UN Compact on Refugees Can Address the Rohingya Crisis

One year since the United Nations adopted the Global Compact on Refugees, Isabella Seif and Kelley Loper of The University of Hong Kong examine the impact of the non-binding framework and how it might be applied to address the Rohingya crisis in Bangladesh and Myanmar. 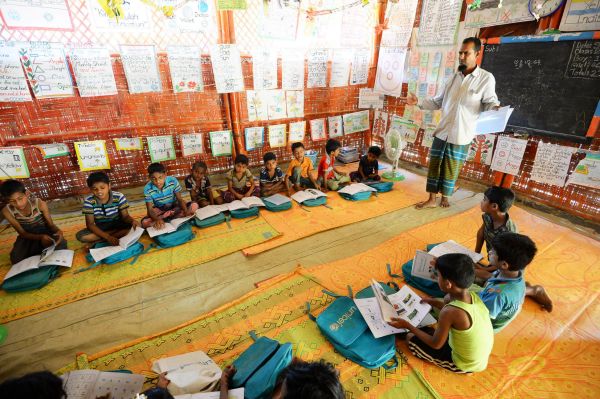 The United Nations General Assembly adopted the Global Compact on Refugees and the Global Compact for Safe, Orderly and Regular Migration in December 2018. These resolutions are milestones that signal the international community’s embrace of a more comprehensive response to the dramatic increase of forced migrants over the past several years. While neither instrument is legally binding, they contain important political commitments that states around the world, including governments in Asia, have accepted. They affirm the global nature of the problem and the need to devise collaborative, longer-term, practical solutions. The Refugee Compact in particular emphasizes international cooperation and responsibility sharing “to better protect and assist refugees and support host countries and communities”.

The anniversary of the Compacts in December provides an opportunity to take stock and reflect on their initial impact and future potential. We hope to make a small contribution to this exercise by considering how the Refugee Compact might apply to the Rohingya refugee situation in Bangladesh. According to the UN High Commissioner for Refugees (UNHCR), more than 900,000 Rohingya people are currently living in refugee camps in Bangladesh. Although Rohingya refugees have fled to Bangladesh to escape persecution in Myanmar for many years, more than 700,000 (81 percent) have arrived since August 2017, prompted by rising violence in Rakhine state. Other Rohingya have gone elsewhere in the region including Thailand, Malaysia, India, Indonesia and Australia.

Durable solutions remain elusive, but the large-scale influx of refugees into Bangladesh is precisely the type of intractable situation that the Refugee Compact aims to address. Can the Compact provide a realistic framework, offer creative ideas, and generate the political will necessary to strengthen the protection of Rohingya refugees?

The Refugee Compact has four objectives:

Underpinning these goals is the Refugee Compact’s focus on sharing resources and expertise among governments and other relevant actors. In this way, the Compact marks a paradigm shift in global responses to refugees. Host countries should not bear the sole burden or responsibility for refugee protection; instead, responsibility must fall on the international community as a whole. This insight has real, practical implications since 80 percent of the world’s refugees live in developing countries which are often ill equipped to ensure full respect for refugees’ basic rights.

Indeed, the large scale and protracted nature of the Rohingya refugee situation has overwhelmed Bangladesh. The majority of the Rohingya live in homes they built themselves in overcrowded camps and have few opportunities to become self-reliant. Rohingya refugee children account for 55 percent of the total community, but they cannot participate in formal schooling and most have no access to education at all. Only a very small proportion of the adult refugee population in Bangladesh are enrolled in skills development training. Rohingya refugees are not allowed to work, although some have provided manual labour to UNHCR-led projects to improve refugee camps.

Safe, adequate housing for refugees is also an unresolved issue. Controversially, the Bangladesh authorities have stated their intention to move some of the Rohingya refugees to new camps on Bhasan Char, an isolated island in the sea of Bengal that is prone to flooding. The UN Special Rapporteur on the situation of human rights in Myanmar and Human Rights Watch, among other organizations, have criticized this proposed relocation and the government has recently announced it has put these plans on hold for the time being. In the meantime, most of the Rohingya refugees live in severely overcrowded camps in Cox’s Bazar.

Bangladesh has received some financial and humanitarian assistance from other countries, organizations, and private donors. The UNHCR, along with several partners, has facilitated fund-raising through a Joint Response Plan for the Rohingya Humanitarian Crisis. The UNCHR has also worked with Bangladesh to register refugees, a process that facilitates better rights protection. By the end of October this year, more than 760,000 Rohingya in Bangladesh had been registered. Despite these efforts, however, overall support is insufficient, and Bangladesh cannot fully cope without further assistance from the international community.

How might the Refugee Compact help? The Compact affirms the willingness of UN member states to contribute and, although the Compact has arguably had minimal impact so far, its emphasis on responsibility sharing could ease some of the pressure on Bangladesh.

One option available under the Refugee Compact is for Bangladesh to activate what is known as the “Support Platform”. This avenue allows countries to request international help in cases of large-scale, complex, or protracted refugee situations where host countries require considerable additional resources. Financial contributions are of course one possibility, but the Refugee Compact also identifies other forms of assistance such as sharing expertise and technical knowledge. To date, no country has yet activated the Support Platform. If activated, however, it would trigger the international community’s responsibility to assist Bangladesh and provide a concrete opportunity to test the Compact’s effectiveness.

The Global Refugee Forum scheduled for December 2019 could also generate greater international support for Bangladesh. The Forum will be the first periodic ministerial-level meeting envisioned by the Refugee Compact and aims to identify opportunities, challenges and methods for enhancing responsibility sharing. Governments are expected to announce pledges and contributions toward realizing the goals of the Refugee Compact. This could support durable solutions if governments pledge, for example, an increase in the number of resettlement places available in third countries. The Refugee Compact also provides for the development of a three-year strategy to increase the pool of resettlement places and consolidate emerging resettlement programmes.

If the international commitments expressed in the Refugee Compact are ultimately translated into concrete action, it could generate some positive momentum

Another – less feasible – option which the Refugee Compact could support is voluntary repatriation. Should Myanmar request assistance under the Refugee Compact, third countries and relevant stakeholders can contribute to tackling the root causes of persecution and setting the stage for the eventual return and reintegration of Rohingya refugees. To date, however, negotiations between Bangladesh and Myanmar have not produced a workable plan and most refugees are apparently unwilling to return. Conditions in Myanmar remain uncertain and the reasons for the mass dislocation of the Rohingya, including the denial of citizenship, have not been addressed or remedied. In October 2019, the head of the UN Independent International Fact Finding Mission on Myanmar explained that “the human rights catastrophe in Myanmar has not ended” and underscored the continuing threat of genocide.

While the Refugee Compact’s approach to addressing large-scale and protracted refugee situations through international cooperation arguably goes further than previous global initiatives, a number of commentators have identified serious limitations. Most notably, the Compact is non-binding, and therefore does not clearly spell out states’ legal obligations. The American-Canadian refugee law scholar James Hathaway of the University of Michigan Law School has been particularly critical, describing the Compact as “thin” and failing to provide robust and reliable protections for refugees.

There are other criticisms. Meltem İneli Ciğer of the Faculty of Law at Turkey’s Suleyman Demirel University points out that the Compact lacks a mechanism to ensure adequate compensation to host states. Alex Aleinikoff, who served as UN deputy high commissioner for refugees from 2010 to 2015 and is now director of the Zolberg Institute on Migration and Mobility at The New School in New York City, notes that states receiving funding under the Compact are not required to guarantee important refugee rights such as the right to work or freedom of movement in asylum states. Realization of these rights is particularly important for allowing refugees to integrate effectively and lead productive lives.

As the first anniversary of the Refugee Compact approaches, it is too soon to evaluate with any certainty its possible long-term impact on the protection of refugee rights in Bangladesh and elsewhere. Much will depend on political will. But if the international commitments expressed in the Refugee Compact are ultimately translated into concrete action, it could generate some positive momentum. At the very least, the Compact’s recognition that effective refugee protection requires responsibility sharing and global engagement signals a positive first step toward longer-term solutions.

Isabella Seif is a research assistant in the Centre for Comparative and Public Law at the University of Hong Kong. She is completing a PhD at the University of Paris I (Panthéon-Sorbonne) on the obligations of corporations as private actors in public international law. Kelley Loper is an associate professor and the co-director of the Master of Laws in Human Rights program in the Faculty of Law at the University of Hong Kong. She is conducting research on the impact of international human rights law on refugee protection in Asian states not party to the 1951 Convention relating to the status of refugees – a project funded by the Hong Kong Research Grants Council.