Holding Their Own? - China-Africa Relations Mature

The rapid expansion of China-Africa economic ties led to questions about a new colonialist dependency. While concerns about debt and oversight persist, the relationship has evolved. Johannesburg-based African business expert Dianna Games argues that it is up to African countries to build the capacity to deal effectively with Beijing.

There is no narrative about Africa in this century that has not included a discourse about China. The Asian giant has played a critical role in African development over the past 20 years, creating a new dynamic in both state and private sector-led growth.

Although China and the continent have had a long relationship in the political sphere, with the Chinese supporting African countries’ struggle for liberation against colonialism, the economic relationship only came later. It began as a trickle in the late 1990s, becoming a flood less than a decade later. Trade and investment continue to spiral, and China has become Africa’s main trading partner, displacing the US and European nations. 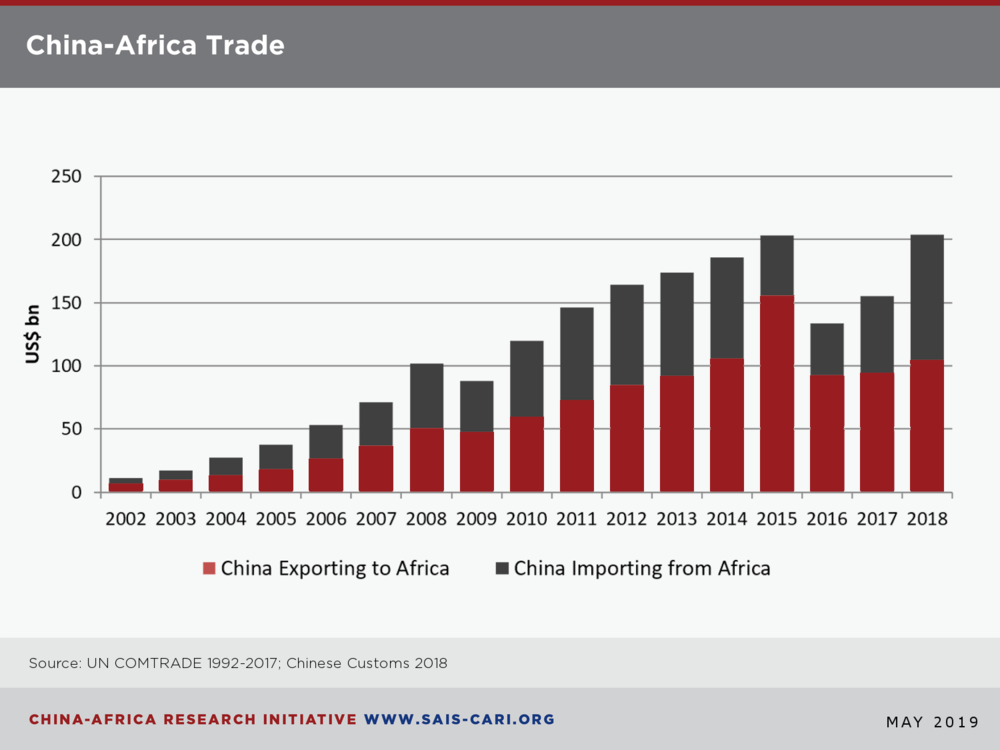 In terms of diversified exports, the trade is not balanced. China exports manufactured goods to Africa while absorbing the continent’s unprocessed commodities, a fact that has led critics to accuse China of replicating the colonial patterns of the past. African commodity producers have quickly become dependent on Chinese business and as a result, China’s fortunes have a significant impact on the continent.

Like any other relationship, China-Africa ties have gone through phases. In the early 2000s, they were close. African governments welcomed a partner that did not carry the historical baggage of the Western development finance institutions and multilateral organizations, and that was not constrained by onerous lending processes and conditions, especially relating to governance and human rights.

The historical underpinning of political support led some governments to believe that China’s more recent interest in Africa was altruistic. This impression was bolstered by the easy money Beijing offered for unproductive vanity projects such as sports stadiums in the early days. As a result, China’s engagement escaped proper scrutiny from Africans themselves.

China knows what it wants and how to get it. It will be up to African countries themselves to make sure this growing engagement becomes more of a relationship of equals.

In time, a more critical tone emerged in the relationship. There was pushback from Africans who felt the Chinese in their businesses were cutting corners in the areas of workplace safety and environmental issues, and they objected to Chinese companies importing labor rather than building skills locally.

There was also unhappiness about the flood of cheap Chinese imports that undermined domestic industry and sucked up limited disposable incomes. A further complaint was China’s “no conditions” aid and loans to African governments, which undermined demands by citizens for better governance.

Africa was urged by Western commentators to set its own agenda with China and develop an equal partnership to end a growing sense of exploitation as the initial euphoria about China’s easy money faded.

The relationship then moved to a more open era of real collaboration forged by lessons learned in past engagement and a more assertive tone adopted by African governments. The discourse shifted from one of exploitation to shared value. This change was also a result of new, and mostly younger, leaders who sought a change in the way things were done in Africa.

They started shifting the focus of continental organizations such as the African Union from politics and conflict to economic issues. Political bureaucrats began engaging in discussion about disruption and entrepreneurship and seeking ways to make the continent more financially self-sufficient.

China’s engagement also shifted. While its state-owned enterprises have cornered the lion’s share of infrastructure projects in Africa, there is more private investment coming to Africa and many smaller Chinese companies have invested in the continent, putting down roots. Large Chinese investments are flowing into mushrooming industrial parks and zones across the continent, boosting Africa’s attempts to industrialize and providing much-needed jobs.

But concerns persist in Africa about how this deepening engagement will play out. Doubts about China’s goodwill towards the continent linger. The earlier notion of China’s business with Africa being a helping hand rather than a hard-nosed quest for its own development and advantage has now faded.

China’s ambitious Belt and Road Initiative (BRI), despite its potential to transform economies, has raised concerns about growing debt in Africa related to Chinese-funded infrastructure projects, already an issue for many countries that have borrowed heavily on international markets to fund economic projects. The concerns were given impetus by the case of Sri Lanka, which according to some reports had to cede its Chinese-built, Beijing-funded Hambantota port to China after the government was unable to meet its debt commitments for the project. [There are differing views on the situation in Hambantota and on Sri Lanka's debt - readers may find a selection here, here, and here.] 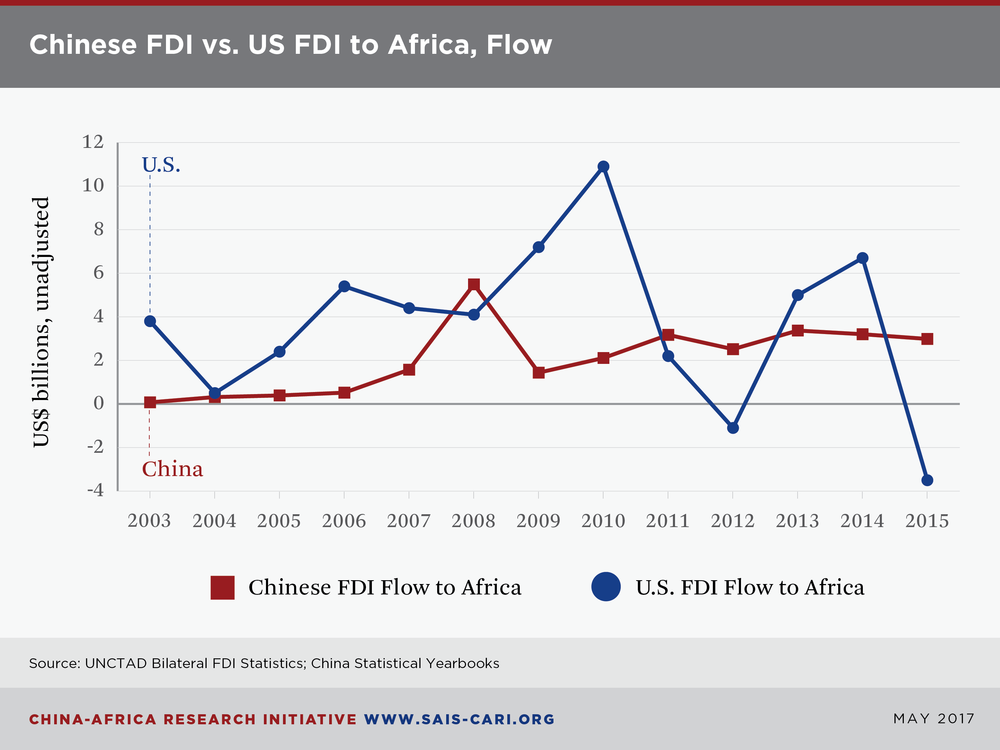 There has been speculation that Kenya, one of the African countries most exposed to Chinese loans, may be a victim of the same debt trap. The country has been borrowing from China for infrastructure projects since 2008, accumulating debt of nearly US$10 billion between 2006 and 2017. The most controversial project is the US$3.2 billion standard gauge railway (SGR) from Mombasa port to Nairobi, which was funded by the Export-Import Bank of China on condition that China Road and Bridge Corporation handled construction.

Kenyans criticised the deal for not having proper scrutiny or oversight. The president defended the deal, saying it was a government-to-government affair, which allowed normal procurement processes to be bypassed. But at US$5.6 million per kilometer for the track alone, Kenya's line cost close to three times the international standard and four times the original estimate.

The government says repayment of the debt is on schedule. But Kenya used the assets of the Port of Mombasa, a lifeline for the country’s economy, as collateral for the initial funding deal. Because they are not protected by sovereign immunity, the concern is that Chinese lenders could lawfully seize them if the debt is not repaid.

The details of Chinese financing are generally opaque but one estimate by Johns Hopkins University’s China-Africa Research Initiative puts Chinese loans to Africa between 2000 and 2017 at US$143 billion. This lending was largely subject to easier terms than those required by the World Bank and other Western donors but without the oversight those lenders typically demand. Africa citizens are concerned that, although everyone gets to benefit from the infrastructure this money is buying, future generations will have to deal with this debt legacy long after the current crop of leaders who are negotiating them are gone. 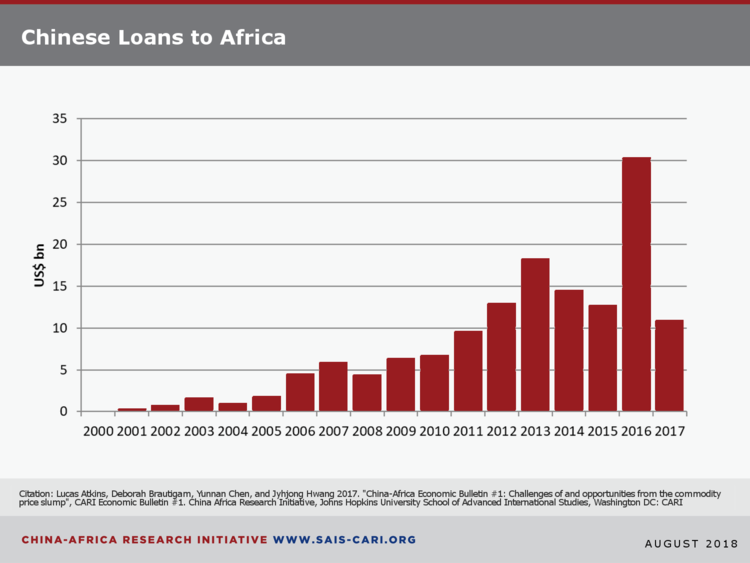 There is no doubting China’s seriousness in its engagement with Africa. Pledges of aid and financing coming out of the Forum for China-Africa Cooperation (FOCAC), a special vehicle established in China to meet every three years to forge and enable a more effective and coherent foreign policy with Africa and to build African capacity to deal with the Chinese, have been formidable.

President Xi Jinping pledged US$60 billion in 2015, recommitting this amount last year. The FOCAC meetings have been routinely high level, dazzling affairs that are better attended by governments than many African Union meetings.

China has certainly been a key enabler of African development and an important partner, despite some areas of concern. This is not just in terms of hard infrastructure but also engagement in many other areas such as skills development, funding for education, technology transfer and others. It has provided Africa with welcome alternatives to meet its development objectives and opportunities.

China knows what it wants and how to get it. As the China-Africa relationship matures, it will be up to African countries themselves to make sure this ever-growing engagement becomes more of a relationship between equals than one that still carries more than a whiff of exploitation.

Bräutigam, Deborah. (April 12, 2018) “US politicians get China in Africa all wrong”, The World Post, Berggruen Institute and The Washington Post. (April 26, 2019) “Is China the World’s Loan Shark?”, The New York Times.

Nyabiage, Jevans. (August 3, 2019) “How speaking with one voice could help Africa get a better deal from China”, South China Morning Post.

Dianna Games is a Johannesburg-based consultant and writer on African business issues. She has been a columnist on Africa’s political economy for Business Day, South Africa’s leading business publication, since 2003 and for African Business magazine since 2018. She is a fellow of the Centre for African Management and Markets at the Gordon Institute of Business Science (GIBS) of the University of Pretoria and works with the Johannesburg Business School and the Wits Business School, which is attached to the University of the Witwatersrand. She is also the executive director of the South Africa-Nigeria Business Chamber. Twitter: @DiannaGames

Going Viral: Cyber Warfare and the Ethic of Cooperation

Thursday, January 14, 2021
Without a mutual understanding of what “cyber warfare” entails, efforts to prevent cyber attacks from escalating into traditional war will prove futile.

What is Missing from the Debate on Technology in Southeast Asia

Thursday, January 14, 2021
For the ASEAN community as a whole to benefit from technology, economics should not be the sole determining driver.

Could China Adopt a Universal Basic Income as a Social-Protection Policy?

Wednesday, December 30, 2020
Against the backdrop of China's success in poverty alleviation, the country could explore the benefits of a basic-income guarantee.

Wednesday, December 23, 2020
As the Chinese economy emerges from the pandemic, the philanthropy sector can build on its swift and effective responses to communities affected by Covid-19.

Thursday, December 17, 2020
Running the government while finding ways to work with the powerful military has been made more complicated by Covid-19 and the resulting economic challenges.