The fallout from the US-China trade battle and the collateral geo-economic disruptions are threatening global economic stability. G20 members meeting in Japan this month need to address the risk of a crisis. The US and China must call off the trade dogs of war – and quickly, writes George Magnus, Research Associate at both the China Centre of Oxford University and at the School of Oriental and African Studies (SOAS) of the University of London. 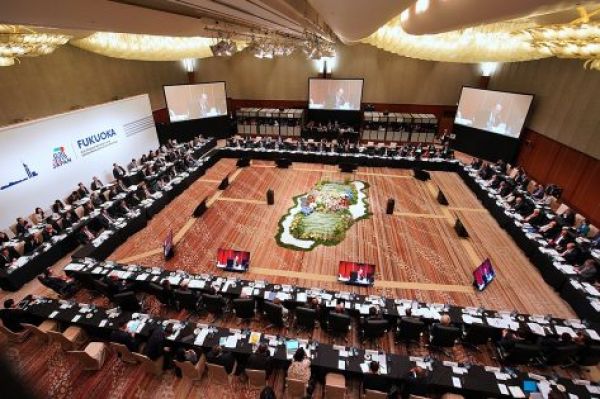 G20 Finance Ministers and Central Bank Governors Meeting in Fukuoka, Japan: The US-China trade dispute and collateral risks to the global economy are now the focus of the summit in Osaka (Credit: Ministry of Finance and Central Bank of Japan)

It is no exaggeration to say that the escalation of the trade war has put the likelihood of a new global recession triggered by the two largest economies and the integrity of the world’s trading and commercial systems center stage at the G20 Summit in Osaka at the end of this month. In a statement, G20 finance ministers and central bankers meeting in Fukuoka on 9 June acknowledged that “trade and geopolitical tensions have intensified”, pledging to address those risks and take any necessary action. Yet, whether Presidents Donald Trump and Xi Jinping meet on the summit sidelines as they did in Argentina last year and try to restart negotiations may depend as much as anything on whether they now think they have crossed an existential Rubicon, and each wants the other to back down.

The details are nevertheless important. The reinstatement and possible extension of punitive 25 percent tariffs by the US and China’s tit-for-tat response are bad enough. Still more worrying is that both sides seem intent on punishing or restraining one another’s companies, and in China’s case individuals, according to the provisions of America’s so-called Entity List and what we know of Beijing’s Unreliable Entity List. The US wants to impede or stop the flow of high-end chips and other components to Huawei and other companies deemed a threat to its national security. China, for its part, has given notice that it will punish companies “severely damaging the legitimate interests” of Chinese firms. In a clear warning to US companies, China has said it would investigate FedEx Corporation for “misrouting” some parcels dispatched by Huawei to China.

Even though many foreign companies in China and local or provincial governments still have relatively harmonious relations in some respects, these actions mark a serious erosion in trust with alarming implications. The trade war is only about trade as such in a limited way. Rather, it is about how both sides see the ground rules for industrial policies in the pursuit of technological primacy with its attendant links to security and military capacity. To understand the implications, we must think about the global tech industry not like we do steel or soybeans, but as having the same sort of highly integrated and systemic structure that was revealed in global finance in 2008.

The Entity List controversy has already dragged in the UK chip designer ARM, for example. Many foreign firms will become involved too, such as TSMC and Foxconn in Taiwan, and Samsung in South Korea. Taiwan sends about a third of its exports to China including parts and components that are assembled or processed for re-export to the US. Malaysia and Singapore are among other countries with deep supply-chain roots around a China core.

Few countries with leading tech firm providers will be spared becoming ensnared. Most have important customers in both China and the US, and all may be confronted with the awkward dilemma as to whether to subscribe to Chinese or US laws at the risk of punishment by the other. If, or as, the balkanization of the global tech sector proceeds, the costs in terms of efficiency, duplication, jobs and prices will be considerable.

More immediately, the latest twists in tariff policies and in targeting companies will send a strong, untimely and broadly deflationary impulse through the US and Chinese economies, and push risk premiums in capital markets higher.

The US economic expansion, shaping up to be the longest ever in July since records started in 1854, is not robust. Jobs are still being created, but consumer purchases, housing, manufacturing and investment goods orders are soft or weakening. A “trade shock” is very likely to tip the US into a new downturn. The Federal Reserve would lower interest rates but to little avail.

China’s economy has stabilized but remains precarious. Underlying growth is not much more than 5 percent, and industrial jobs are shrinking along with heavy industries. Automobile sales have tumbled and there is a pedestrian feel about housing, trade and manufacturing investment even after early-year fiscal and credit stimulus. A trade shock as described could take over 1 percent or more off Chinese growth in a year, even without factoring in the relocation now underway of some supply chain operations outside China by many foreign and some Chinese firms.

The US and China need to call off the trade dogs of war – and quickly. The Sino-US relationship will never be the same again but bilaterally, they could start to rebuild trust, setting less ambitious goals and trying to establish rules for intellectual property, specific sectors, market access, and opening up of services. More complex, boiler-plate topics such as state aid and subsidies belong more to the World Trade Organization (WTO) but here too we need a G20 breakthrough to avert global trade chaos. The US is not enamored with the WTO and has blocked the appointment of four (of seven) vacant Dispute Settlement Mechanism judicial positions. Come December, when two of the remaining three judges step down, the WTO could be toothless. There would be no point in a rules-based organization that could not enforce its own rules.

G20 gatherings regularly fail to deliver hopes and expectations, but this is the most important summit since London in 2008, just as the global crisis was unfolding. The best we can hope for at this point is that Presidents Trump and Xi shake hands and agree to keep talking, and that the US softens a bit on pressing WTO issues. For global markets, any type of engagement will qualify as relief.

In any event, though, companies and others with longer-term views will look through these short-term issues and doubtless pursue contingency plans. They seem resigned to the fact that the US-China relationship is in flux and unpredictable. If the siren voices on both sides calling for “decoupling” or disengagement of the US-China relationship and for national self-reliance gain traction and greater support, the global economy and the technology industry will splinter, and commercial conflicts could easily spill into other policy areas where fault lines are opening.

George Magnus is an independent economist and commentator, and Research Associate at both the China Centre, Oxford University, and the School of Oriental and African Studies (SOAS), University of London. He was the chief economist and then senior economic adviser at UBS Investment Bank in London from 1995 to 2012. Previous to that, he had worked as the chief economist at SG Warburg. His book "Red Flags: Why Xi Jinping’s China is in Jeopardy" was published by Yale University Press in September 2018.