In Myanmar, Buddhist nationalist groups have used Facebook to swamp public opinion with anti-Muslim speech. As elected representatives are pressed to follow these extreme views, Myanmar is showing the world how unreined social media can hurt democracy. 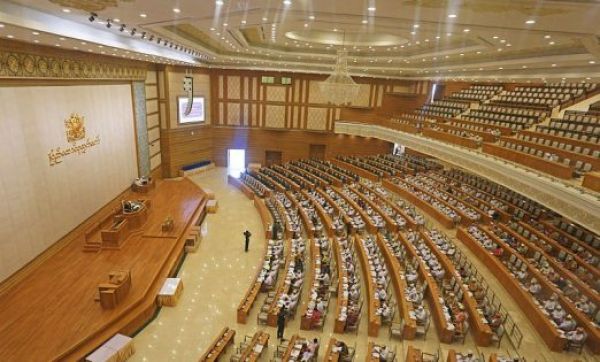 Politicians and regulators are focusing on how social media can be used as a weapon in polls. But Facebook undermines other parts of representative democracy, not just elections. Myanmar presents a pressing example of this.

The duty of an elected representative was summarized in 1774 by Irish statesman Edmund Burke: “Your representative owes you, not his industry only, but his judgment; and he betrays, instead of serving you, if he sacrifices it to your opinion.”

However, Buddhist nationalist groups in Myanmar are pressuring members of parliament to do precisely what Burke opposed. They have forcefully campaigned in the overwhelmingly Buddhist country so that their brand of extreme, anti-Muslim nationalism has become seemingly the only voice in support of Buddhism. These groups pressure elected representatives to parrot extreme views, making them unable to apply their best judgment. This is surely as damaging to representative democracy as electoral manipulation.

Myanmar’s democracy is by no means fully formed. The country is barely a procedural democracy—its constitution was drafted by its military. A quarter of parliamentary seats, in addition to key ministerial roles, are reserved for the military.

From 1962 until the 2010 election, Myanmar was ruled by a military junta. So, an aggressive, social media-driven Buddhist nationalist movement is not the only thing the current civilian administration, led by Aung San Suu Kyi, must face. The government must also contend with the constant threat of the military retaking the country.

This is far from an ideal environment for Myanmar’s elected representatives to responsibly carry out their duty, and social media only makes things worse.

Modern communications technology is new to Myanmar. For decades, the country’s military rulers exercised tight control over information flows and suppressed speech. Speaking out about politics was dangerous and could lead to lengthy imprisonment. Foreign media was blocked until 2011 and domestic media was heavily censored until 2012.

Increased freedom of speech and access to modern media came to Myanmar almost simultaneously, within the last six years. Prior to this, mobile phone usage in Myanmar was so low that, per capita, only North Korea had fewer mobile phones.

Once the telecommunications market was opened and SIM prices dropped from thousands of U.S. dollars each to as little as US$1, mobile phone usage surged. By 2016, mobile phone penetration had topped 90%, making the internet readily available to the majority of Myanmar’s 51 million residents. These changes have greatly altered the way Myanmar’s residents communicate. For many in the country, their first experience of the internet was using Facebook on their mobile phones.

Facebook has aggressively worked towards market domination in Myanmar. It cooperates with Myanmar’s mobile phone carriers to allow the sort of limited data-free usage that India’s regulators have rejected on net neutrality grounds. This has proven to be a successful tactic.

For Myanmar’s residents, modern means of communication and new freedoms in political speech arrived virtually overnight. In a country where political speech had been taboo for decades, residents can now post and read unfiltered opinions at will.

Myanmar’s Buddhist nationalist groups, which include the 969 Movement and the Ma Ba Tha, have aggressively promoted a nationalism that is exclusively Buddhist. They have fought for policies like the “Protection of Race and Religion” laws that limit the rights of ethnic and religious minorities and women.

Facebook is a core tool in these efforts. The platform’s dominance in Myanmar has allowed nationalists to create an online culture akin to a digital mob, devoid of nuance and opposing perspectives. Nationalist figures with hundreds of thousands, sometimes millions, of followers are quick to accuse dissenters of being anti-Buddhist or foreign stooges.

Buddhist nationalist groups use social media to circulate information about meetings, memes, and rumors. Nationalists have whipped up panic about the supposed threat Myanmar’s Buddhists face from Muslims. They have also been criticized for promoting anti-Muslim hate speech. At the same time, their clout silences dissenters fearful of electoral and personal consequences. Facebook, for its part, has been criticized for its reluctance to remove anti-Muslim hate speech.

Facebook's dominance in Myanmar has allowed nationalists to create an online culture akin to a digital mob.

So social media in Myanmar is often blamed for reinforcing and spreading anti-Muslim and anti-Rohingya attitudes. In particular, Senior United Nations figures have highlighted how social media helped create an environment where the ongoing genocide against the Rohingya can take place without domestic political opposition. In March, Yanghee Lee, the outgoing U.N. special rapporteur for human rights in Myanmar, blamed Facebook for “inciting a lot of violence and a lot of hatred against the Rohingya and other ethnic minorities.” Marzuki Darusman, the chairperson of the U.N. Independent International Fact-Finding Mission on Myanmar, said social media has “substantively contributed to the level of acrimony and dissension and conflict, if you will, within the public. Hate speech is certainly, of course, a part of that. As far as the Myanmar situation is concerned, social media is Facebook, and Facebook is social media.”

Representative Democracy is Worth Defending

The nationalists’ command of social media means that future electoral success for Myanmar’s civilian politicians may depend on acquiescing to nationalist views. There is evidence that this is already happening. In the face of a brutal military crackdown on the Rohingya minority that has caused the forced displacement of more than 700,000 since last August, Myanmar’s civilian politicians have been either silent or supportive of the military.

Most striking in this lack of opposition is the country’s civilian leader, Aung San Suu Kyi. Once a vocal critic of Myanmar’s military, Aung San Suu Kyi has seemed to relay the military’s views about the crisis and has not sought to revoke the “Protection of Race and Religion” laws.

The nationalists’ command of social media means that future electoral success for Myanmar’s civilian politicians may depend on acquiescing to nationalist views.

The recent arrival of the internet in this previously-closed country means that the political power of social media in Myanmar is less diluted than in countries with longer-established and more diverse media environments.

For international policymakers, Myanmar serves as a warning of the impact social media has on political systems. Nationalists in Myanmar have used social media in a way that has damaged representative democracy. This leaves Myanmar less capable in tackling the economic, political, and social challenges it faces.

Ronan Lee is a PhD researcher at Deakin University's Alfred Deakin Institute for Citizenship and Globalisation. His focus is on the history, identity, and political attitudes of Myanmar’s Rohingya Muslims. Ronan’s professional background is in politics. He was formerly a Queensland state member of parliament and parliamentary secretary, and he has worked as a senior government advisor and campaign manager. Ronan met with Myanmar’s current leader Aung San Suu Kyi shortly after her release from house arrest in 2010, and he was awarded the Neil Archbold Memorial Medal for his 2015 journal article "A Politician, Not an Icon: Aung San Suu Kyi's Silence on Myanmar's Muslim Rohingya." Ronan has provided expert comment and analysis about the politics of Myanmar for the BBC, Al Jazeera, "TIME," and "The Guardian."