Denuclearizing North Korea: What Must Happen Next

Donald Trump’s surprise meeting with Kim Jong-Un in the De-Militarized Zone border area with South Korea has re-energized the dialogue between Washington and Pyongyang. The challenge for both sides is to translate this renewed contact into a meaningful continuation of the denuclearization process, writes Graham Ong-Webb, Adjunct Fellow at the S Rajaratnam School of International Studies (RSIS) at Nanyang Technological University (NTU) in Singapore. 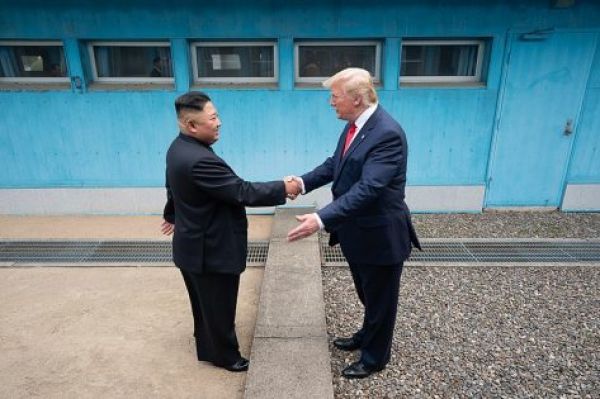 North Korean Leader Kim Jong-un and US President Donald Trump: After the summitry and photo ops, time for serious discussions towards denuclearization (Credit: The White House)

The late Anglo-American essayist and poet T. S. Eliot once said, “We shall not cease from exploration, and the end of all our exploring will be to arrive where we started and know the place for the first time.”

No observer would conceivably describe the current president of the United States as a poet of any sort. However, it would be unfair to deny Donald Trump and his administration the credit for the inventiveness and can-do spirit—hallmarks of explorers—in their approach toward engaging the Democratic People’s Republic of Korea (DPRK), and its leader, Chairman Kim Jong-Un, that led to a jump-start in diplomatic talks last weekend.

The challenge now is for the Trump administration to translate this renewed contact into a process that raises the likelihood that discussions and activities geared towards the denuclearization of North Korea actually lead to some degree of dismantlement of that country’s nuclear-weapons capability and one that would be difficult to reverse.

Certainly, there was the exchange of letters between Kim and Trump over the course of June that kept a semblance of a communication channel open. Also, Russian President Vladimir Putin and Chinese President Xi Jinping, from their separate meetings with Kim, have relayed to Trump the North Korean leader’s desire for further dialogue.

Nevertheless, there has been, in effect, a six-month freeze in working-level and summit-level talks between Washington and Pyongyang since the breakdown in negotiations during the second Trump-Kim summit in February in Hanoi, Vietnam. To recap, Trump refused Kim’s request to trade activities toward denuclearization for immediate sanctions relief, leaving the North Korean leader quite humiliated.

In the following months, North Korea was reported to have executed its nuclear envoy to the United States, Kim Hyok-chol, and dispatched Kim Yong-chol, the counterpart of US Secretary of State Mike Pompeo, to hard labor in a re-education camp. While questions have been raised about the truth of these purges, nonetheless the reports underscore that the stakes are very high for his regime; so high that even South Korean President Moon Jae-In could not break the US-North Korea impasse despite his country’s détente with the DPRK that last year seemed – literally – to bear fruit.

Moreover, even though Pyongyang since November 2017 has yet to violate its self-declared moratorium on nuclear and inter-continental ballistic missile tests, it has renewed pressure on the United States by launching several short-range missiles (some of which experts reckon to be ballistic in nature). In effect, Pyongyang did break the suspension of missile testing of any kind under prevailing UN resolutions.

Yet Trump, in his unorthodox style, pulled off what was essentially a “mini summit” with a slighted and increasingly bellicose Kim; a gamble since there was some probability the North Korean leader could have chosen not to show up. Despite suggestions that there were likely some minor preparations to cater for the prospect of this meeting, it was — by established standards of summitry — essentially impromptu.

In following his instincts, Trump counted on Kim’s true impulse that any face-to-face with the US president would generate some meaningful political dividends, rather than any dispassionate calculus that it would be better to avoid Trump in tactical negotiations because it could risk another humiliation.

As such, with the mutual agreement to restart working-level discussions regarding North Korea’s denuclearization, the United States and North Korea are once again back at where they were between the first and second summits. In a sense, Washington and Pyongyang are more likely caught in between two frames: the necessities of getting the optics and tone of the relationship right that characterized the first summit, and the imperative of closing a deal that constituted the second summit.

Certainly, there are several facets to the Korean Peninsula crisis that put at stake North Korea’s standing with the United States, South Korea, China, Japan, and Russia — the “six parties” — and therefore require bilateral and multilateral discussions to address the interests of all parties if there is going to be long-term stability in Northeast Asia. However, what matters to the United States under the Trump administration is the core threat posed by North Korea’s nuclear-tipped intercontinental ballistic missiles to the US homeland.

As such, most parties have no choice but to recognize that further progress toward the long-term stability in the peninsula and the region is dependent on headway in US-North Korean relations. As one Chinese academic put it bluntly, “No third party can be a meaningful mediator in this case. Whether North Korea will eventually proceed with denuclearization depends entirely on its bilateral negotiations with the US. The two alone decide outcomes and neither Beijing nor Seoul can make significant differences”.

While Trump said he is “not looking for speed” in future negotiations but “looking to get it right” there will also be an inherent limit on the number of times either side can re-start dialogues should there more breakdowns. One breakdown and restart may be all that is allowed.

Fundamentally, the trust between Washington and Pyongyang is so brittle that the Trump administration would be deemed astute in assuming that this renewed diplomatic exchange is the final opportunity for working-level discussions and a more official third Trump-Kim summit, to produce some kind of agreement for North Korea to begin denuclearizing in a manner that is acceptable to both leaders.  What this means is that both sides must start conceding some ground of their own.

It is increasingly untenable for the Trump administration to want to reward North Korea only after it has achieved denuclearization, which can be a long and drawn-out process difficult to verify, although Trump hinted at sanctions relief minutes after his DMZ session with Kim. It is also increasingly untenable for the Kim regime not to dismantle the Yongbyon Nuclear Scientific Research Center as a significant milestone towards further denuclearization after offering to do so in prior meetings. Eventually, Kim has to remove, at least, the ICBM layer of its overall nuclear capabilities that have threatened the US mainland since late 2017.

Back to optics and gestures, President Trump set foot from the DMZ into North Korean territory precisely because he does expect Kim to reciprocate by seeing him in White House. This is a game of quid pro quo, and the waypoints for further progress have now been set for the rest of this year and perhaps into the first half of 2020 (before American voters start chalking up Trump’s overall scorecard in the run-up to the next presidential election).

By that time, it should be clear whether the US-North Korean negotiations will have succeeded in abating the nuclear threat. If no progress is achieved, Trump could well revert to the "fire-and-fury" brinkmanship of the early days of his administration. Pyongyang has already indicated it could easily shift to a negative tone: A statement on 3 July issued by the North Korean delegation to the UN called the US "obsessed with sanctions" and "hell-bent on hostile acts", accusing Washington of wanting to "undermine the peaceful atmosphere" of the Korean Peninsula.

Graham Ong-Webb is an adjunct fellow at the S Rajaratnam School of International Studies (RSIS) at Nanyang Technological University (NTU) in Singapore. In addition to having taught at RSIS, Graham has lectured at the Royal Defence Academy in the United Kingdom, the Royal Brunei Armed Forces Defence Academy, the National University of Singapore, the Singapore University of the Social Sciences, and ESSEC Business School. A Commonwealth Scholar, Graham received his PhD from the Department of War Studies at King’s College London, where his doctoral work focused on the behavior of second-tier nuclear powers, specifically China.