The Covid-19 pandemic has generated significant stress and distrust between China and other countries, particularly the United States. While tensions between the two powers are not new, writes Yoshikazu Kato of the Asia Global Institute, they have been further exacerbated by the emergence even before the coronavirus crisis of a more assertive China on the global stage and Xi Jinping’s pursuit of his doctrine of major-power diplomacy, which the Chinese leadership will reiterate at the annual sitting of the National People's Congress that opens on May 22. 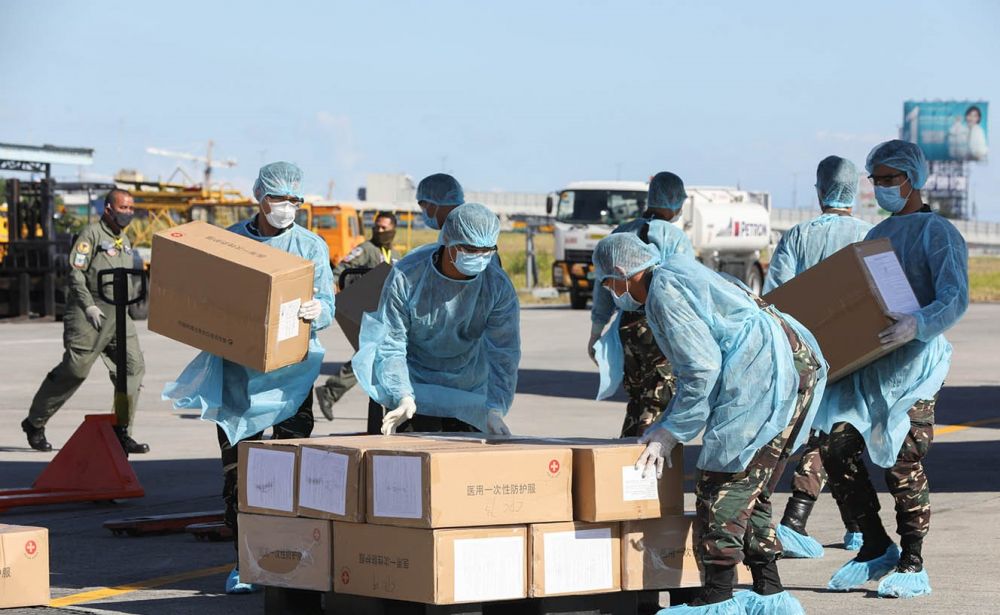 Donation diplomacy: Aid packages of medical supplies from China are unloaded at an airbase in Manila, Philippines, March 2020 (Credit: Toto Lozano/Presidential Communications Operations Office, Office of the President of the Philippines)

Since Xi Jinping took office in 2012, the Chinese Communist Party (CCP) has promoted the idea that China must engage in major-power diplomacy (大国外交- daguowaijiao). The Chinese leader has carefully redefined the concept from meaning diplomacy with major powers such as the US, Russia and Japan to diplomacy that China conducts as a major power. The concept has four aspects: economic expansion, political penetration, “friendship creation”, and protection of core interests. By employing tools from investment (consider the grand Belt and Road Initiative) to intelligence, Beijing aims to enhance the legitimacy of the CCP in China and abroad to ensure the party’s continued survival in power.

As Covid-19 has spread from China across the world, Beijing’s actions have showcased Xi’s major-power diplomacy and the implications of this strategy. The Chinese leader’s speech on May 18 to the World Health Assembly, the governing forum of the World Health Organization (WHO), was a case in point. In his address, Xi gave a robust defense of the Chinese handling of the coronavirus outbreak, insisting that they had acted with “openness, transparency and responsibility”. He went so far as to support a “comprehensive review” of the pandemic, something which many countries have been demanding, but only once the outbreak was under control. Xi also pledged US$2 billion toward the pandemic fight over the next two years, an offer in sharp contrast to US President Donald Trump’s decision to withhold American funding from the WHO and his threat to leave the organization altogether.

The early stages of Covid-19 had put the CCP on the defensive as its response appeared to undermine public trust and confidence in the regime at home, later spurring criticism around the world. Numerous media reports and official statements reveal that, while the first case occurred in Wuhan in late 2019, the municipal government did not begin to address the problem until January 20 this year when Xi ordered that action be taken to control the novel coronavirus. Wuhan’s lockdown started three days later.

By March, Xi was not holding back on the superlatives in describing the coronavirus epidemic and how serious a challenge it was. This is "the fastest- and widest-spreading infection and a major public health threat that is the most difficult to prevent and control since the founding of the People’s Republic of China”, he declared. “This is a crisis, a big test for us.”

Many political leaders around the world, particularly in the US, Australia and Europe have been critical of the CCP’s lack of transparency in the early stages of the epidemic (also a factor at the start of the severe acute respiratory syndrome, or SARS, outbreak in 2002-3). This had implications for both China’s neighbors and countries with which China has commercial and transport links. The complaints added to the fundamental mistrust that many nations already had of Xi’s regime, due in large measure to China’s more forthright foreign policy of recent years. So-called “wolf-warrior” Chinese diplomats, who have riled host countries with their plainspoken talk, have become emblematic of that robust approach.

For its part, the CCP is insisting that its response to Covid-19 was fast and effective from the beginning, highlighting its willingness to share information including the virus genome with the World Health Organization (WHO) as well as other national health authorities. Despite these claims, some countries, mainly in the West, have maintained their concerns about China’s reliability, focusing on its relationship with the WHO as well as on the CCP’s low level of transparency, slow response and evidence of attempts to suppress the spread of information about the coronavirus.

In the US, Republican Party lawmakers have introduced bills such as the Li Wenliang Global Public Health Accountability Act that would impose sanctions against China because of Covid-19. Li was the ophthalmologist in Wuhan who raised an alarm about the coronavirus only to be warned by police for making false comments on the internet. Li died from the disease on February 7.

Along with the US, the Australian government and the European Union have raised questions about the origin of the coronavirus, proposing an independent scientific investigation into the matter. Beijing had rejected the idea, even warning that if Canberra pushed for an inquiry, Chinese consumers might launch a boycott of Australian products. China later announced anti-dumping tariffs on Australian barley and suspended imports of beef from four abattoirs in the country, though the Australian government maintained that the trade tiffs were unrelated to its call for a Covid-19 study.

Xi’s World Health Assembly speech appeared to indicate that Beijing has softened its stance on an independent international pandemic probe. China, however, has shown no signs of bending on the issue of granting Taiwan observer status on the global public-health body. Taiwan’s strong response to the coronavirus had inspired several countries including the US, Australia, Canada, Japan, New Zealand, France, Germany and Britain to push for accepting Taipei’s longstanding bid. In the context of the worst global public-health crisis for over a century and the criticism of China’s initial response to the coronavirus outbreak, Beijing’s intransigence has come across as incongruent with China’s aspirations for major-power status. 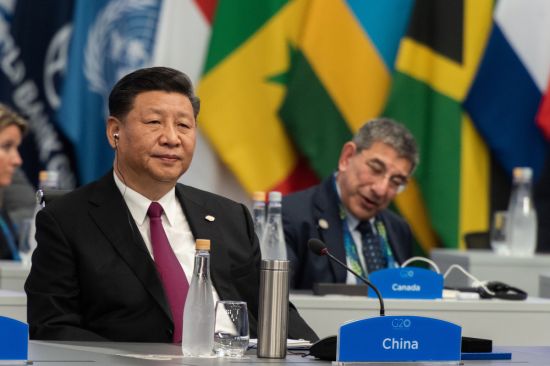 As the coronavirus began spreading to other countries and China’s draconian lockdown strategy yielded positive results, the CCP turned its attention to international diplomacy. “As we live in the same global village on planet Earth, building a community with a shared future for mankind is a right choice that meets the trend of our times,” State Councilor and Foreign Minister Wang Yi said in remarks to an extraordinary meeting of foreign ministers of the BRICS (Brazil, Russia, India, China and South Africa) in Beijing on April 28.

After focusing on national cohesion and shoring up government support at home, CCP officials viewed Covid-19 as a strategic opportunity to influence other countries by supplying medical devices and protective equipment, sharing knowhow, and cooperating with international agencies to increase the CCP’s global legitimacy and diplomacy.

The CCP embarked on a campaign to counter criticism of its shortcomings in dealing with the virus, widely viewed as the side-effects of Xi’s strongman politics, and instead highlight its contributions to the global pandemic fight and its role as a “responsible major power” on the international stage. “We would like to share China's best practices with other countries, but we will not turn it into any kind of geopolitical weapon or tool,” Hua Chunying, Foreign Ministry spokesperson noted. “China would like to contribute our experience and ideas to global public health security and governance, which is something we should do as a responsible major country.”

Clearly, the CCP intends to use the context of Covid-19 to implement further Xi’s major-power diplomacy. China is harnessing its economic capabilities by producing medical equipment such as protective gear and virus tests and supplying them to both developed and developing countries facing shortages. These efforts, however, initially backfired when many items in initial shipments proved faulty or of low quality.

China is also seeking to expand its political influence by propagating the narrative that China is contributing to global public health. At the same time, the CCP is stepping up its sharp criticism of the US – its response to the pandemic and its attempts to blame China for its predicament. Supported by conservative media, Washington officials including President Donald Trump and his Secretary of State Mike Pompeo have pushed the narrative that the “Chinese virus” originated in a Wuhan lab. Beijing officials reacted by pushing an equally tenuous tale about the virus being brought to Wuhan by US military personnel.

The blame game is set to continue for some months, given that Trump’s pandemic response performance has become the main issue of the presidential election in November. Beijing is continuing to fight back with its own rhetoric. Said spokesperson Hua on May 7: “We urge the US to stop spreading disinformation and misleading the international community. It should reflect on its own problems and work hard to bring its own epidemic situation under control. It is high time that it gave up the blame-dumping trick.”

While Trump, according to polls, continues to confound Americans and the world with his erratic handling of the pandemic, Xi has been engaging in “friendship expansion” through “telephone diplomacy”. According to the Chinese Ministry of Foreign Affairs, Xi held telephone meetings with other heads of state or government and UN officials 12 times in February, 11 times in March and 16 times in April.

In the short term, as part of his major-power diplomacy, Xi will launch a campaign aimed at portraying China not as a rule breaker but as a supporter of the international order – reminiscent of his attention-grabbing speech at the World Economic Forum Annual Meeting in Davos in January 2017 on the eve of President Trump’s inauguration. The CCP is keenly aware that China’s development has relied heavily on the existing rules and values-based global system established by Western democratic capitalist countries, particularly the US. Rather than seek to overturn the system, the CCP will endorse globalization and multilateralism to convince the international community that it can be a major power and a leader on global issues at a time when the US looks increasingly inward and may even be retreating, especially if Trump wins re-election.

Xi’s major-power diplomacy will see China increasingly take advantage of the pandemic to try to engage in standard-setting and rulemaking for global governance. “China’s signature strength, efficiency and speed in this fight has been widely acclaimed,” Foreign Ministry’s spokesman Zhao Lijian declared at a press conference on March 5. “China set a new standard for the global efforts against the epidemic.”  As former US diplomat Kurt Campbell and China scholar Rush Doshi have argued, “Beijing understands that if it is seen as leading, and Washington is seen as unable or unwilling to do so, this perception could fundamentally alter the United States’ position in global politics and the contest for leadership in the twenty-first century.”

Covid-19 provides a useful and convenient context for the CCP to pursue major-power diplomacy and increase its credibility both internally and externally. Will it succeed?